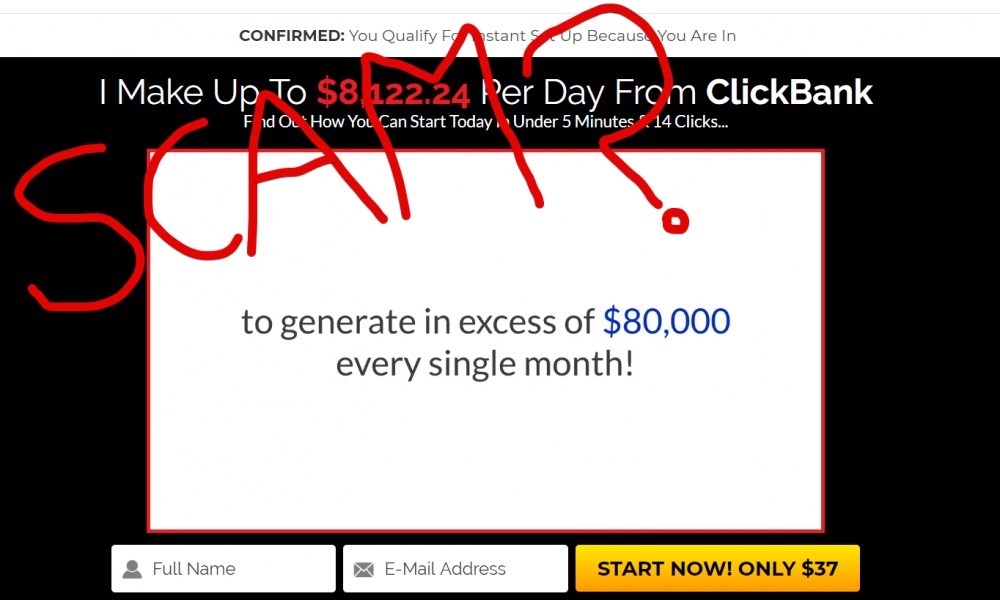 CB Cash Code, aka The Clickbank Cash Code, is supposedly some incredible new system developed by George Patterson that anyone can make tons of money with online. Well… At least this is what he tells you. But is this really all true? Is this the incredible money making system that he claims it is, or is this just another BS scam that is going to be a waste of your time and money?

I’m sorry to say… But unfortunately this is the latter… Just another BS scam and in this review I will be showing you this. If you are possibly thinking about buying in, please take the time to read over my review before hand. You will be glad you did.

What Is CB Cash Code?

As stated, CB Cash Code is a system developed by George Patterson for anyone to make money online by using the “secret” site ClickBank.

When you land on the website for CB Cash Code Scam you are immediately greeted with a video presentation that “will change your life forever”. George claims that some people are making $80,000 or more per month “quickly and easily”.

Now if this is in a red flag than I don’t know what is. Making $80,000 per month “quickly and easily”… Come on now… To sounds way too good to be true.

But wait… He then shows you proof of this by logging into his ClickBank account, showing that he has made over $83,000 in the past month. However, as I will discuss shortly, this tells you absolutely nothing about how much you could possibly make.

The best thing of all is that he claims this method only takes about 10 minutes of time each day… Yep… Definitely sounds like a typical get-rich-quick scheme here… kind-of like Ecom Cash Code & Profit Genesis.

But yet there he goes… Keeps on showing his ClickBank accounts to try to prove to you that this is the real deal.

You Can’t Trust Anything Shown

And then of course there are the testimonial videos from other people claiming to have used the system and made tons of money with it… But unfortunately these are all fake.

Whenever I look into a product like this I always make sure to look into the different testimonials if there are any. Why? Well… Because they are often fake, just as the ones shown in the video presentation for CB Cash Code.

Take a look below… This lady claims that she had no idea she could make so much money online and is now making over $80,000 per month with this system, all while working less than 10 minutes per day. However, you can see that she is a paid actress that is available for hire on the freelance marketplace called Fiverr… Meaning that she was getting paid to say all of this and has never actually used the system.

And it is the same story with the other testimonials… They are all fake and all paid actors.

So can you really trust it when he tells you that every single one of his existing members has made more than $20,000 in their first week using the system?… Absolutely not… 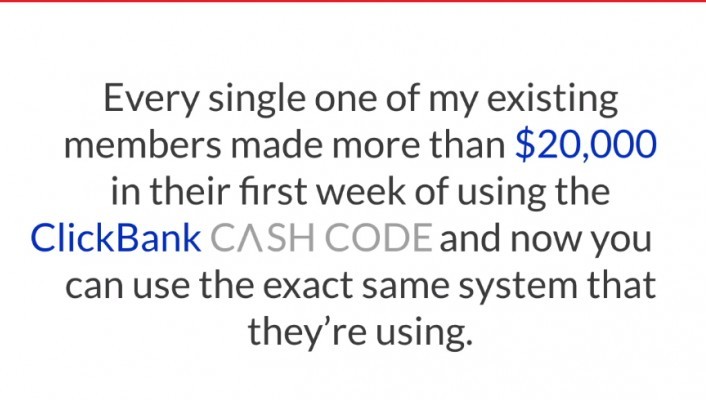 Who Is This George Patterson Guy?

One major problem that I have is that there is no verifiable information given on this “George Patterson” guy. He doesn’t show a picture of himself or anything like that and because of this I am hesitant to believe that he even exists. I review scams all the time that are promoted under fabricated names because of course the real creators do not want to be known.

If you are selling a scam what you want to put your name on it? Probably not… Then people would come after you.

George Patterson tells you that he had some hard childhood growing up and was introduced to this amazing money making method by an old childhood friend later on in life when his mother was sick and in the hospital.

Is any of it true? I highly doubt it.

One thing that I found rather funny was that he claims that ClickBank is some secret website that almost nobody knows about… Including big corporations.

This could not be further from the truth. ClickBank is by far one of the most popular digital product marketplaces online and it is definitely no secret. I have been involved in online marketing since 2015 and I have known about this place forever.

The reason he is telling you is some secret is to make this opportunity sound better than it really is. He wants to make you believe that there is some incredible income opportunity out there and that buying into this CB Cash Code program is the only way to get your foot in the door.

Something I also wanted to talk about is all the money this guy shows you he is making through ClickBank. He shows screenshots over and over again of his ClickBank accounts, such as this one… 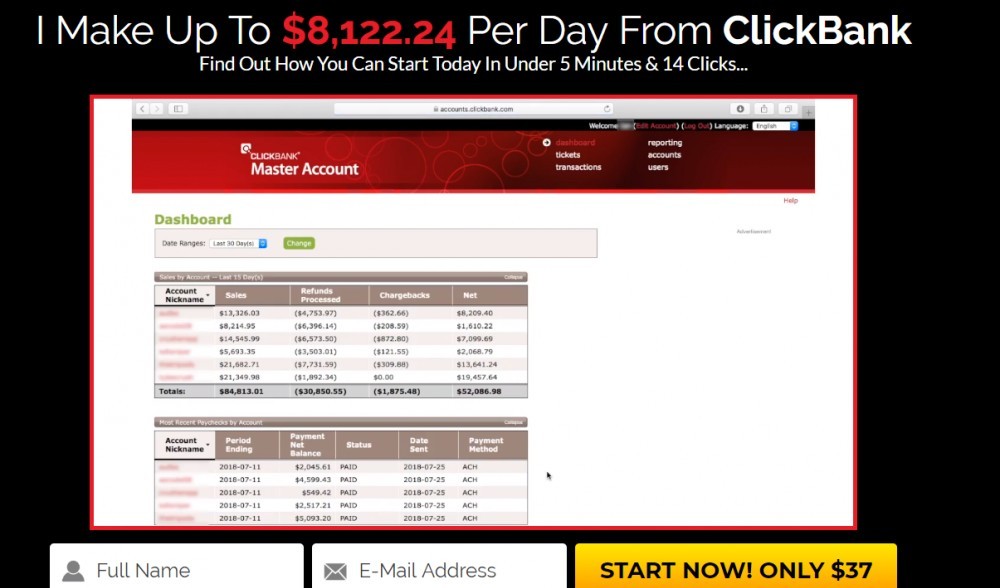 But you cannot base your income potential off of the money this guy is making. This guy is making money from selling products, such as CB Cash Code on the ClickBank marketplace… That’s right, CB Cash Code is sold on ClickBank. What you will be doing is completely different. You will not be creating your and products and selling them. Instead you will be promoting products and earning commissions doing so.

So basically this guy is making all of his money selling scammy products that don’t work.

One major sign that this is a scam is how he never even tells you how the darn system works. Throughout the entire video presentation he just talks about how easy this is, how much money people are making with it, the ridiculous back story on how he came across the, and so on.

In order to find out what the system is really about, of course you have to buy into it.

Just think about that for a second… What legitimate program/system is out there that makes you buy in before even knowing what you are buying into?

The reason I know what you are buying into is because I have seen dozens of systems like this before and have reviewed many.

I haven’t actually purchased this system and tried it out, but there is no way you are going to be making $80,000 per month.

What this system will show you how to do is promote ClickBank products and earn commissions doing so.

Every product on ClickBank is able to be promoted. You will simply promote products via affiliate links and when people click on your links and proceed to purchase the product, you then get paid. It sounds simple, but of course is much more complicated than it sounds. It is not like you can just go out there and start posting links everywhere to make tons of money.

Clickbank Cash Code is what I would call a get-rich-quick scheme. It is advertised as a way to make tons of money in a very short period of time, and of course you are told that it requires just about no work at all. These are all lies that are created to lure in unsuspecting individuals, who will only find out that is a scam after they have purchased it and wasted their time and money.

Just think about it… If the system were really all that great then why is this guy selling it for only $37? If you really can make $80,000 per month with only 10 minutes of work per day with this system… He should easily be able to sell it for tens of thousands of dollars. Oh… But that’s right… He claims he just wants to help people out. Of course.

This is just one of the many lives. The reason he is selling it for only $37 is because this is a crappy product that does not work and certainly is not worth any more than $37. The reason he is selling it for so cheap is probably because he will get away with scamming people more… People will not try to get their refunds as much compared to if it were more expensive.

I got started making online back in 2015 and now I make a living doing so. If I could only recommend one program for beginners to get started making money online, it would be Wealthy Affiliate. Wealthy Affiliate is a great training program that teaches people how to make money online in affiliate marketing, which is when you make money promoting other people’s products. This is the simplest way for beginners to get started because you can just promote products that are already proven to sell.

Wealthy Affiliate is actually where I got started back in 2015 so I know from experience that it does work. I’m not going to get into it all here, but you can click the button below to learn more…

Questions or comments? Leave them below and I’ll get back to you soon! 🙂