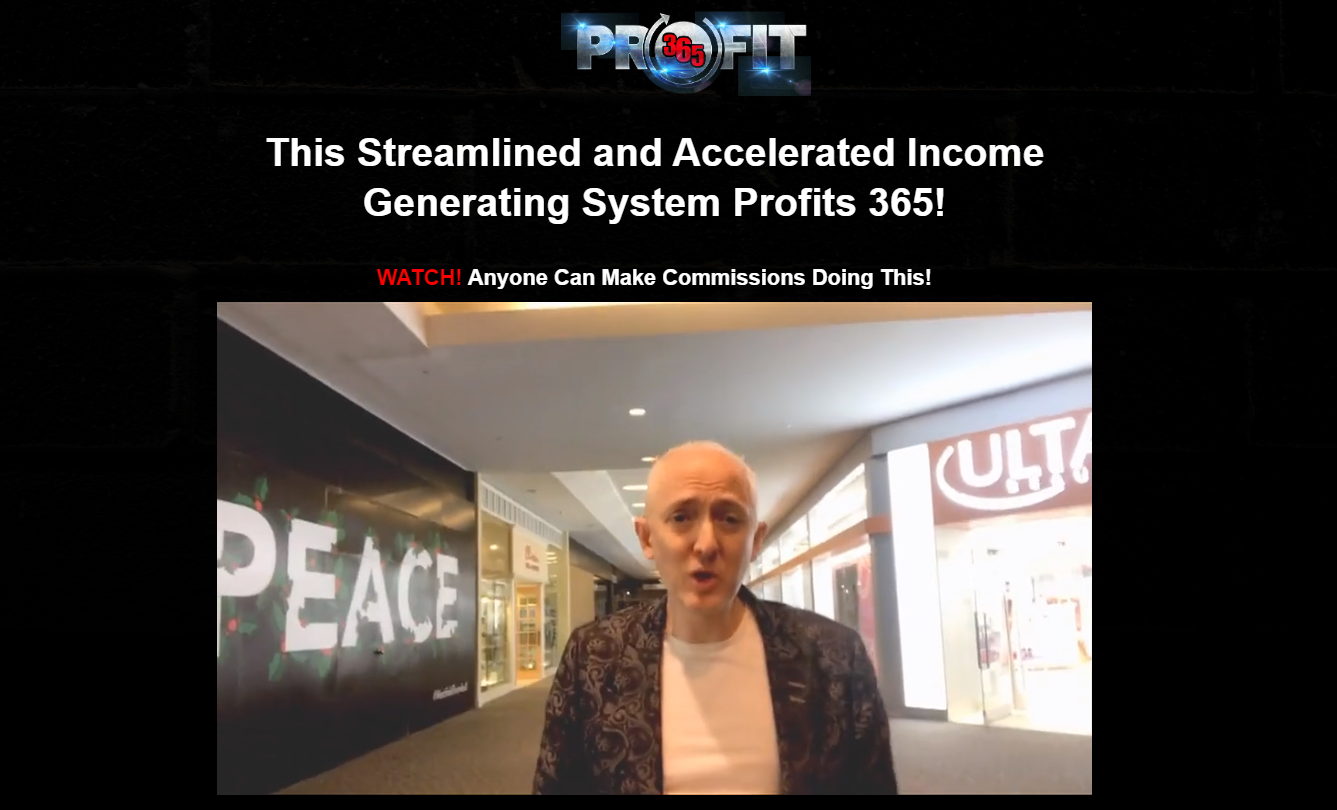 Profit 365 is a new system that was recently released by Jamie Lewis which he says you can make up to $2800 a day with. But is this actually true? Is this a realistic statement or is Profit 365 another scam you probably be avoiding?

Well… Let’s just say that it is a darn good thing you came across my review here because this system is not nearly as incredible as it is claimed to be.

The promotional video with Jamie Lewis starts out like a pretty typical get-rich-quick scheme, at least in my opinion. He is constantly showing off all the money he is making online and even films some ridiculous video of him going up to people in the mall telling them to just go out and create a ClickBank account so that they can “change the world” by blasting out links to the masses. They probably had no idea they would be featured in such a scammy video.

Nearly half the video presentation is just him showing off all of his accounts and all of the money he makes.

So it’s no wonder why you were suspicious and decided to do a little bit of extra research… It sure as heck seems it could very well be another scam right off the bat. But anyways… Let’s get into the review.

I first went to make it clear that this is a review for the Profit 365 system by Jamie Lewis. There are others out there with the same name and that is why I am telling you this.

In a nutshell, the system is designed to be easy for people to make money online. Basically Jamie provide you with campaigns he has used successfully in the past and tells you exactly what to do. A lot of it is “done for you” and requires little to no work.

Sounds awesome, but of course this definitely doesn’t mean it is going to work out well.

Who Is Jamie Lewis?

If you have read previous reviews I have written on products this guy has released, you probably know I’m not the biggest fan.

Why not? Well… Because this guy loves to over-hype his systems and really show off his life of luxury. Also, he seems to be way more focused at pushing out products as fast as possible so that you can make as much money as possible, rather than really putting all his effort into putting out great quality products where he provides great quality support.

All his different “make money online” systems are promoted as being the next big thing. The promotional video makes it seem like this Profit 365 system is it… It is what you need… It is the “secret” that you have been waiting to uncover… It is the key to success. HOWEVER, I reviewed 2 of his other systems recently, Wealthy Agency and Profit Injector, and they are promoted in the same exact ways. And by the way, they were both just released within the past month, which may make you question how much effort this guy is actually putting into all of these systems…

How You Make Money With This System

You will be making money doing what is called affiliate marketing, which is a judgment business model that I actually have been doing online since 2015 and have had great success with. Basically this is where you promote someone else’s products and earn commissions when you help make sales.

The focus here is on promoting ClickBank products via paid traffic, specifically solo ads, which he will provide you with pre-made email swipes for.

Solo ads or when you pay some with an email list to blast out a promotion to their last. So basically what you will be doing is using the swipes that he provide you with and paying to have them sent out to large lists of people via email. And all these emails will be writing ClickBank products which will hopefully make you money.

Just like pretty much every ClickBank products, there are upsells. If you thought the $34 upfront cost was going to be it, you thought wrong. After buying in, you will be pushed to purchase…

Do you need any of these other products?

Well… Let’s just say that I am not going to be recommending them.

The Problems With This System

The first problem I foresee is that this is just too darn easy. There are too many “done for you” aspects of the system and because of this you don’t really learn much of anything. That means you are 100% reliant on the system and not going to be building a sustainable online business for yourself.

And these are the exact types of systems that Jamie is famous for… They lure in the people looking for ways to” get-rich-quick”, which never really and very well.

I also don’t like the fact that you will be promoting ClickBank products, which are often very low quality and many times “scammy”. Sure, you can use his methods to promote some decent products, but much of what you will be doing is certainly not going to “change the world”, if anything it is going to leave the world feeling a little bit ripped off with the low quality products they were just suckered into buying.

Something else that he definitely does not tell you is that this is NOT going to work out as well as it seems. Just think about it… Everyone is going to be sending out the same darn email swipes. This type of thing gets old real fast and market saturation is a serious concern.

If you do the same thing over and over again, eventually starts to get worn out. If everyone is sending out the same emails they are not going to work near as good and this is always the case with these types of systems.

And of course I just don’t like how over-hyped this system is. It makes you believe that you’re going to be striking it rich… Making up to $2800 a day. That is very unrealistic and you should not expect to earn anywhere even relatively close to that amount.

As I said, this guy is famous for these types of over-hyped systems that get you really excited but usually are a letdown.

I wouldn’t call this system a scam, but I’m also not going to be recommending it because I do not consider it to be very good quality, nor do I think it is going to work out well.

I have reviewed tons of scams over the years and systems that just aren’t that great, and this falls into the category of “not being that great”. While it is definitely possible to make money with the system, I just don’t think it is worth the time nor the effort.

If you want to build a real online income for yourself, and not just be 100% reliant on some system that is going to last forever, and I highly suggest taking a look at this guide I put together that shows exactly how I went from $0 to over $6000 a month online.