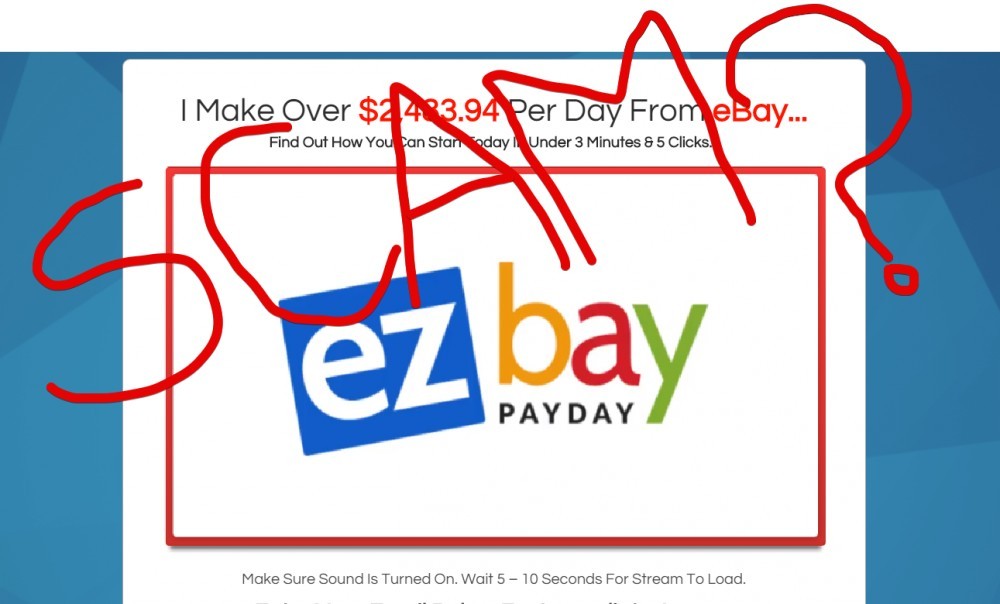 EZ Bay Payday Scam by Steve Richards – Yes This Is a SCAM! [Review] 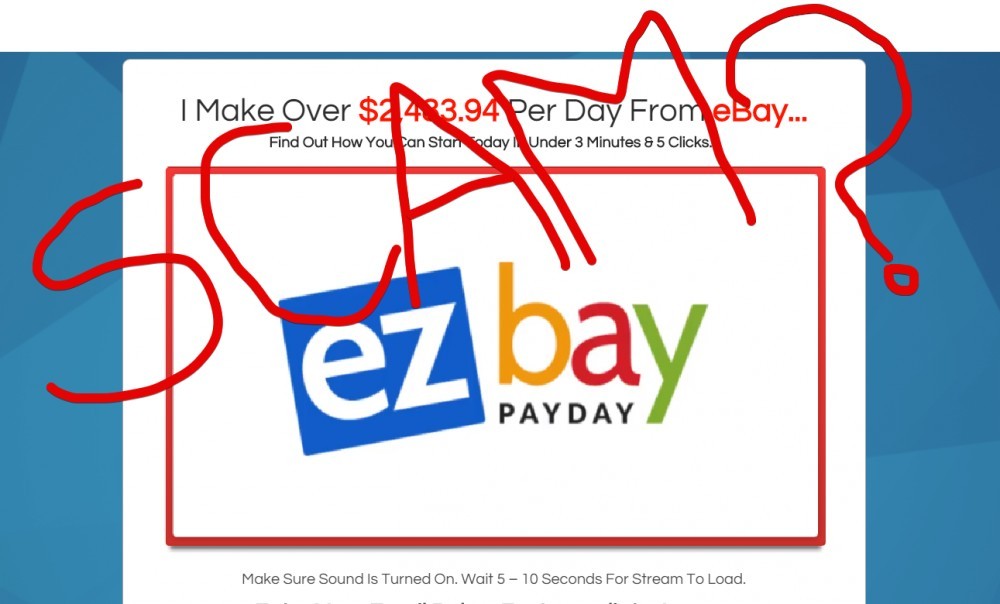 EZ Bay Payday is said to be some incredibly easy way to make $500 or more day online… But of course you can always trust what you hear. Is this the real deal or is this all just a bunch of hype? Is EZ Bay Payday really a scam that you need to avoid at all costs?… A scam that is just going to be a waste of your time and money?

I no you may have gotten your hopes up, but unfortunately this system/program, whatever you want to call it, is not something that I’m going to recommend by any means. In short… Yes, this IS A SCAM and in this review I’ll be going over why this is the case.

I’m guessing you probably came across the system after receiving an email about some amazing new opportunity that you have been selected for, or something along those lines. This seems to be how most people are being introduced to it, but I guess there are probably other ways you could have come across it. Anyways… This doesn’t really matter.

When you first get to the website there is a video presentation waiting for you. Near the beginning of the video, Steve Richards who is supposedly the guy who created the system, logs into one of his accounts to show you all the money he is making. He does this to prove to you that this is the real deal, however this is the first big RED FLAG that, my attention.

He logs into his ClickBank account, yet the name of this system is “EZ Bay Payday”…. And above the video it says “I make over $2483.94 per day from eBay”. So if you is making all this money from eBay then why the heck is he showing you his ClickBank account? It is only like 10 seconds into the video at this point and there are already some signs that this is probably a scam. 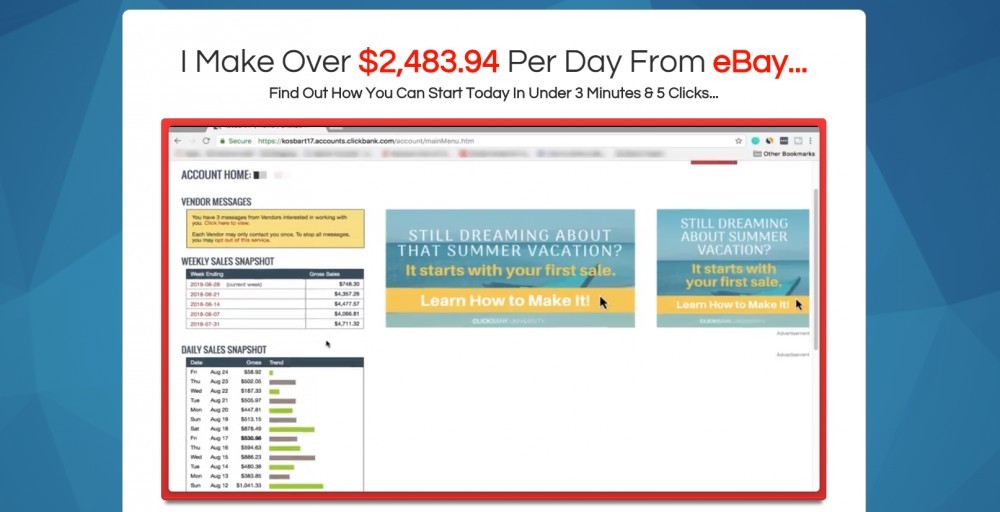 But anyways… He claims that he just opened up the system to a limited number of people in that everyone who joined yesterday has made $500 since and that is very easy to make $500 per day. But of course there are only a limited number of openings left and they are filling up fast… Which is likely a complete lie.

A lot of times, well pretty much every time, scam systems will tell you that there are limited positions. Most of the time this is not true and is just a form of false scarcity to try to get people to buy in as soon as possible. Of course the faster you buy and the less likely you are to do extra research income across reviews exposing the scams, like mine here now.

The icing on the cake is that this only takes 20 minutes of work per day… According to Steve. Of course it only takes 20 minutes… Just like every get-rich-quick scheme out there, which reminds me a lot of some recent scams I’ve exposed such as Profit 24/7 and CB Cash Code.

And of course throughout the video presentation he talks about how you are going to be able to buy whatever you want, shows flashy cars, mansions, vacations, etc. Most of the video isn’t on how the system actually works, but is more focused on telling you over and over again how much money you can make very little time… A common sign of a scam.

In the video presentation he hints at some secret, or little-known website that people are using to make tons of money with. What is this site? It is eBay of course… Only one of the most popular and well-known e-commerce sites out there.

So now that we know this is all about eBay, I still have no idea why he would show you income screenshots from ClickBank, which is a completely different website and has nothing to do with eBay.

As expected, he offers very little information on this in the information that he does provide is vague, not really giving you any idea of what is going on here.

Apparently with this system you get paid when other people by other people stuff on eBay. It allows you to receive a cut of the billions of dollars flowing through eBay, or at least that is what he says…

He describe this as a way to be able to tap into eBay’s traffic and siphon profits from the transactions. Best yet… It is 100% automated which means there is no work for you to do other than to get it set up in the beginning.

Do you have any idea what the heck he is talking about yet? Yeah… Will neither do I and the reason is because it makes absolutely no sense.

He explains how the system works in four steps, but this also offers no additional information and just leaves you wondering.

Step 2: pick a product to sell

Ok….. But how does the system work. I guess we are just supposed to trust that the system does work how he says… By somehow siphoning money from transactions made on eBay, which I have never heard of before even though I have been involved in online marketing since 2015.

Who Is Steve Richards?

As I’ve mentioned, Steve Richards is supposedly the man behind the system. He claims that he used to work dead-end jobs and fell for a bunch of scams while trying to make money online. Then one day he posted something on eBay and it went viral… He got tons of notifications and that is how he discovered this incredible method for making money online, which the system is based around.

Of course he is a philanthropist, which he actually calls himself, and is giving this away for so cheap because he wants to give you a break. Yeah… Like this is true. Pretty much every every scam ever makes this same statement.

I honestly don’t even believe the guy exists. I review scams all the time and they are often promoted under fake names. The real people behind them make up a fictitious character because of course they do not want their actual name known, afraid of the consequences that come from scamming people.

What you have to realize is that there is absolutely no verifiable information provided on this Steve Richards guy. He doesn’t even show a picture of himself.

Here Are Some Proven Lies!

Steve Richards may or may not be a real person, he is probably not and it is probably all a lie, but here are some lies that I can actually prove.

Remember in the video presentation all of the different testimonials from people who claim to be using this system to make tons of money online? Yeah… Well they are all fake.

This right here is pretty much proof that this is all a scam. If the system were really amazing, as it is claimed to be, then it should be very easy to get real testimonials from people who have actually used it. People should be more than happy to review the system and give praise.

But that is not what we see here, below you can see that these are all paid actors available for hire on Fiverr, which is a digital freelance marketplace. I actually recognize these people right away because I have seen their same fake testimonial videos used to promote other scams…

There are some systems that just aren’t very good, there are others that are a little bit scammy that you can make some money with, and then there are ones that are pure scams… This one seems like the latter. It seems like a pure scam that you want to avoid at all costs.

Now I haven’t actually bought into this in tried it out for myself, and I certainly am not going to do so, but from my better judgment this is how things seem to be.

It as the typical get-rich-quick scheme sales page, which probably made you suspicious of it from the start. Any time you come across some opportunity that supposedly can make you tons of money with very little work, it is usually a scam.

I started making money online back in 2015 and currently make a full-time income online, meaning that I have experience and no a fair amount about what works and what doesn’t work.

If you are a beginner then my top recommendation would definitely be the Wealthy Affiliate training program, which is the same program I got started with back in 2015. It is a very good training program that guides you step-by-step to creating your own sustainable online business, which I’m like going to get into here but you can click the button below to learn more…

And if you have any comments or questions, just leave them down below and I’ll get back to you as soon as I can 🙂