Home Income Millionaire – Scam That You Will NOT Make $5,000 This Week With

Home Income Millionaire is a system that anyone can supposedly make really easy money with, and we are even told that “you will make your first $5,000 this week” and that we’re going to become millionaires.

But is it possible that Home Income Millionaire is a scam we should be avoiding? Or is this really the magical money generating system we are told it is?

When it comes to online money making systems you have to be really careful. It’s hard to know what you are getting involved with when you buy into things on the internet–and this is where I come in. I’ve been exposing online scams for years now and unfortunately this “Home Income Millionaire” system looks an aweful lot like one right off the bat.

Thinking about buying into this system? I’d strongly recomment NOT doing so–you will see why.

Home Income Millionaire (found at homeincomemillionaire.com) was supposedly created by some guy named “Mark” who is kind enought to let other people use it to make “truckloads” of money. He literally says that we will be “making money by the truckload” and that we “won’t even lift a finger because other people will do the work for you”.

But it doesn’t end there… Not yet.

He also claims that it will only take a few minutes of work per day! Are you serious??!!

And then he goes on to talke about how we will be able to buy the house of your dreams, buy sports cars and travel the world.

Sounds incredible but obviously this sounds way too good to be true.

I mean, come on now–even if this system really could bring money in automatically by the “truckload”, why would he be sharing it with us? I know he leads us to believe that we have been handpicked because we are the perfect match and what not–but this is a bunch of BS.

The truth is he knows nothing about you and I. The truth is that you probably got an email or something along these lines that talked about some revolutionary new way to make money online and you clicked this link–along with hundreds of others.

The truth is that this is a big fat scam and there are a lot of lies being told by this “Mark” guy just to get you to buy into it–so that he (of the real creator) can make money off of you.

A Video Presentation Filled With Lies..

Nearly half of the video presentation is just a bunch of fluff and lies–a bunch of BS.

Within a minute of starting the video there was this guy (pictured below) claiming that he has made more cash than he could have ever imagined with this system–HOWEVER, this testimonial is a complete fake! 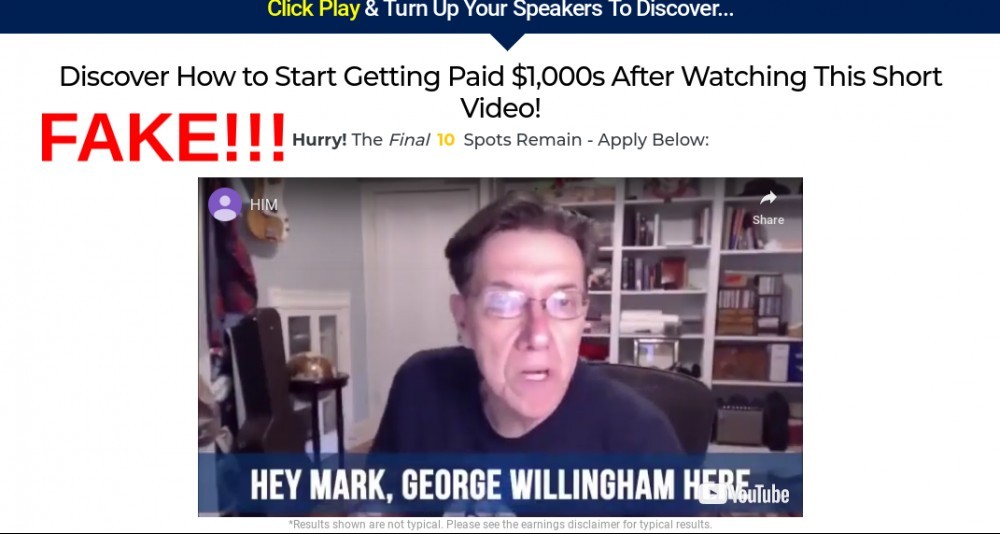 Well, I actually knew it as soon as I saw the video because I have seen this same guy before multiple times in other testimonial videos. The reason is because he is a paid actor that is available for hire on the freelance marketplace called Fiverr… 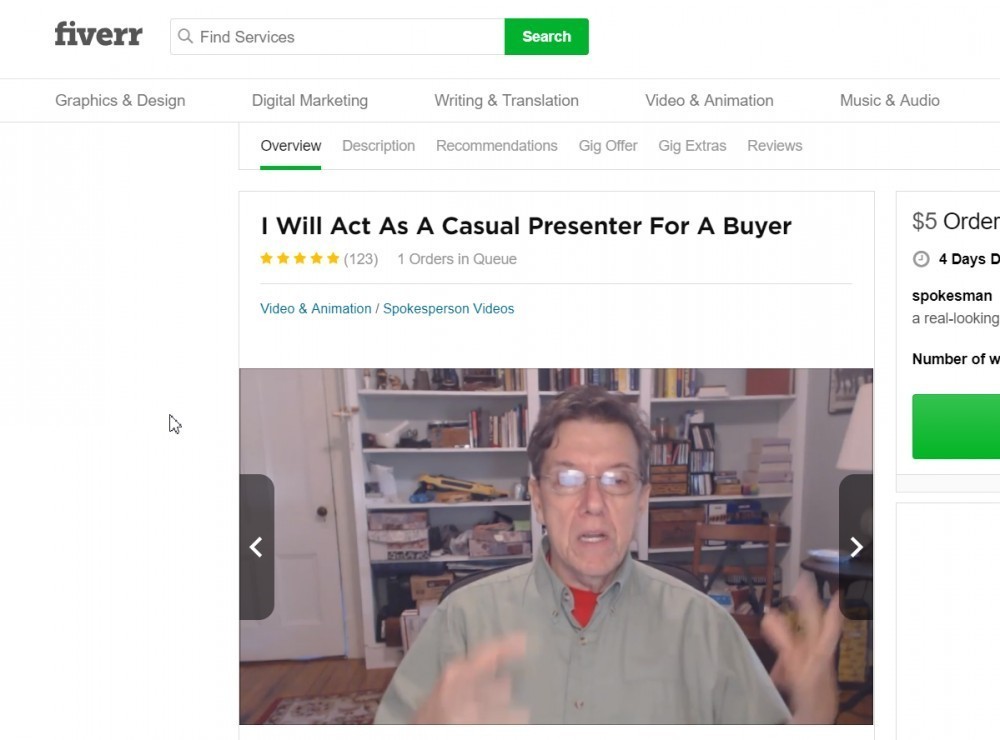 The same goes for all the other testimonial videos that are displayed during the video presentation, such as this guy who claims to have made over $37,000 in a week… 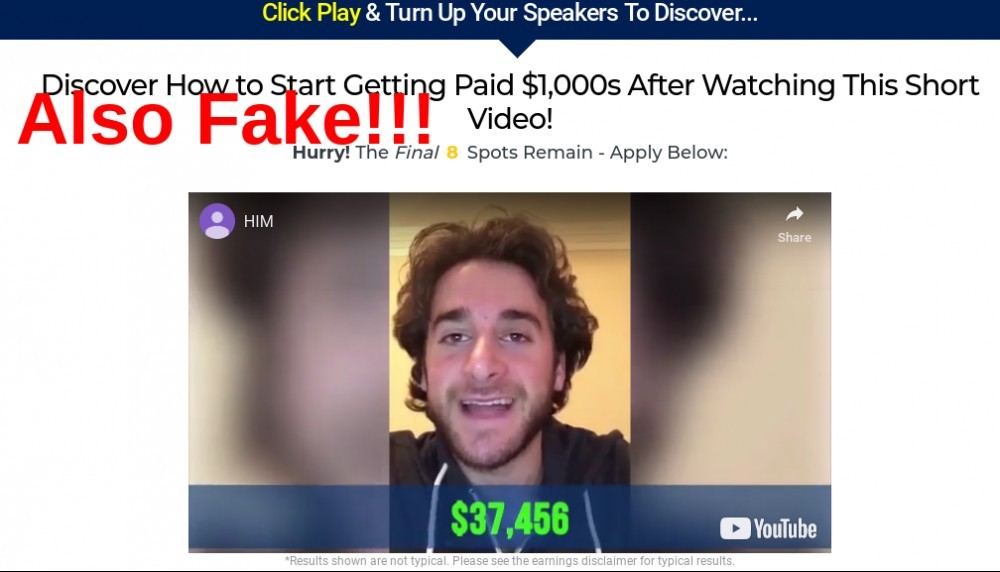 Just About Every Red-Flag In The Book

When I review potential scams I usually look for any reason that they might be legitimate, but unfortunately pretty much everything I see with Home Income Millionaire just makes it look more and more like a scam.

This is nothing more than false scarcity and it is a very common scammy marketing tactic that is used to try to get people to buy in as fast as possible.

Of course there are all of the ridiculous income claims, such as how the guy tells us we are going to be able to make $5,000 in the first week–and of course we are told that we can make these large amounts of money without even lifting a finger.

When something sounds too good to be true, it usually is. This is a great rule of thumb to live by.

No Idea Who This “Mark” Guy Is

The creator’s name is supposedly Mark, but other than that we know nothing about this guy. My guess is that Mark is probably just a made-up name used to promote this deceptive scam. We are given no photos, nothing–just some long backstory that could easily have been made up as well.

No Mention of How You Will Make Money

And possibly the biggest red flag of all is the fact that the entire video presentation gives us no real idea of how exactly this system is going to be making us money. There’s a bunch of talk about how it is going to make super easy money without the need for us to do any real work, but all the information provided is very vague and leaves us wondering what the heck it’s all about.

This is very common with online scams. They provide you a bunch of fluff and overhyped information–then you have to actually buy in before finding out what you bought into.

Conclusion – Scam You Should Avoid

These days I’m pretty careful with what I call a scam or not. If I think something is a scam but I don’t have that much proof, I usually will not specifically call it such. HOWEVER, this system is definitely one of the most obvious scams I have ever come across, so even though I have not bought into this and lost money, I am going to be calling it a scam.

If someone can prove to me that it is not a scam, I will gladly change my opinion in this review, but until then it is a scam in my book.

There is no super easy way to make money online that only takes a few minutes each day. Sure, there are some people who have been working online for years and are now able to work very little and make a lot of money, but these people are far from being beginners. You can’t expect to start out and make “truckloads” of money.

Making money online takes work, real work. If there was some magical online money machine then I would be all over it, and I would have all my family and friends involved–but there isn’t.

If you are looking for a proven and legitimate way to make money online, one that I have personal experience with, then I would highly suggest taking a look at how I make a living working online for myself, which It’s something that I have been doing since 2015.

Alternatively You can also check out my top picks for making money from home.