3D Wealth Machine Review – Wait a Minute… Is This a Scam? 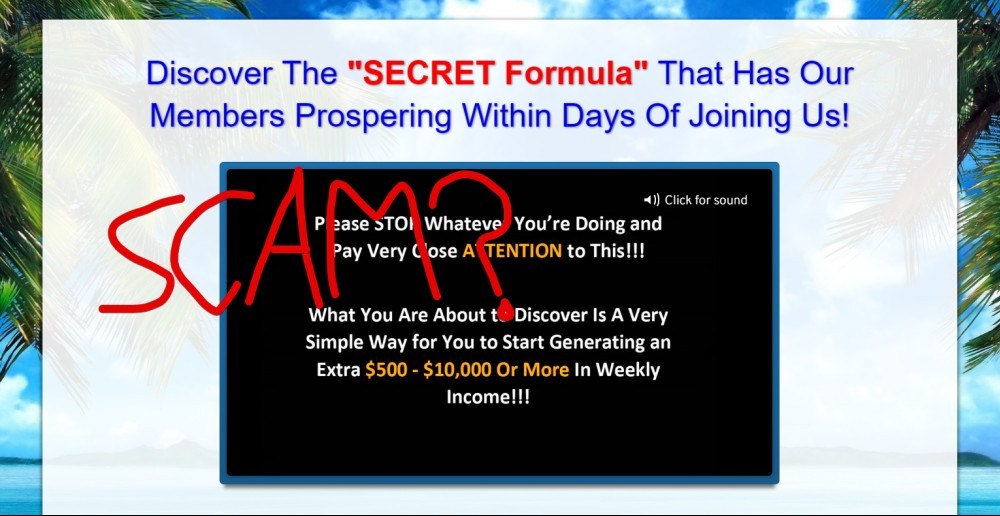 Coach Bob’s 3D Wealth Machine sounds like a super easy way to make money online but is it really? He explains it as a “very simple” way to generate $500-$10,000 or more in weekly income… But doesn’t this sound a little bit too good to be true?

Just think about it… A “very simple” way to generate up to $10,000 per week!!?? That is a heck of a lot of money to be making in a very simple way and right off the bat this sounds too good to be true.

And there is plenty more where this came from. He also describes this as a “completely turn-key 100% automated direct response platorm” that “allows you to site back, relax, and just count the cash”. It is also supposedly “top-secret”, which is far from being the truth.

But anyways…  in this 3D Wealth Machine I’ll be exposing it all so that you know what this system is really all about and what you are really getting into, which he does not tell you. Basically all Mr. Bob does his tells you all the good stuff. He tells you about the massive commissions you can be making and how much of the system is automated, but he leaves out all the downsides. I will be giving you all that you need to know.

What Is 3D Wealth Machine?

3D Wealth Machine it is nothing more than a sales funnel for another program called Leveraged Breakthrough, which

coach Bob is a part of.

What’s going on here is coach Bob is a member of Leveraged Breakthrough and he gets paid to recruit in other members, which is the same thing that you will be doing.

There is no actual system called “3D Wealth Machine”. This is just the sales funnel that coach Bob has created to funnel people into the Leveraged Breakthrough program.

Well… I guess I pretty much explained it all above. How this all works is pretty simple… Leveraged Breakthrough is an expensive program that coach Bob is a part of. They have an affiliate program where members can get paid commissions when they help sell memberships. So what coach Bob is doing is recruiting others any and selling memberships with his 3D Wealth Machine sales funnel.

If you end up buying into this whole thing you will be doing the same thing. You will be promoting Leveraged Breakthrough in one way or another and trying to earn commissions. Why do I say this? Well because that is what the program is focused on as I will explain below…

What Is Leveraged Breakthrough?

Leveraged Breakthrough is what you call a high ticket program, meaning that is very expensive and that you can earn large commissions when you recruit others in.

The program is often promoted as a way to earn $1500-$10,500 per sale or more. So since you are able to earn that much per sale you can imagine how much the memberships actually cost. Of course they have to cost more than the commissions members are getting paid for promoting them.

Within the program there are four different levels of membership, the Gold Level, the Platinum Level, the Diamond Level, and the Ultra Royal Level. Below you can see the cost of buying into these four levels:

The catch to this all is that you can’t just sign up and start promoting the products to earn commissions. You first have to buy in and you only can earn commissions on what you have already bought.

So for example if you buy in night Gold Level and recruit someone in that joins at the Platinum Level, you are not going to earn commissions on that sale. You would’ve had to be a Platinum Level member in order to earn those commissions. You must either be a member at that level or higher to earn the commissions from a sale. This is how they keep the money pouring in… They get you to join at the lower level in then suck the money out of you by enticing you to buy your way up so that you will be able to earn larger commissions.

What Is Leveraged Breakthrough All About?

I’ve been talking all about the price and realize I haven’t even mentioned what this program is all about.

Well basically they sell products for personal development, sales and marketing, and leadership training. It is one of those programs that make you believe you are destined for some fabulous luxurious lifestyle where you are completely financially free, and then of course they push you to promote their high ticket program so that you can achieve this financial freedom.

In my opinion these types of programs are pretty much scams, but some people would disagree with me about this.

It’s A Risky Game To Play

This may sound pretty amazing to you. I mean all you have to do is buy into these expensive products one time and then you can sell them to other people unlimited amounts of times, earning massive commissions over and over and over again. Sounds pretty good right?

Well… I would proceed with extreme caution if I were you. The FTC has been on a rampage lately shutting down these types of high ticket moneymaking scams. Now I am not calling Leveraged Breakthrough a scam right here, but I will say that this program VERY closely resembles some of the other high ticket scams that have been shut down, which include MOBE and Digital Altitude.

Could you imagine buying into this program for thousands of dollars and then it getting shut down, giving you the inability to ever recoup your initial investment? Since it would be shut down you would not be able to recruit others in and earn your investment back, which is the whole point of these types of programs. This may sound a little far-fetched but it is something that you should think about because this happened to many people in both of the two scams I mentioned above, MOBE and Digital Altitude.

It’s Not That Easy Either

Something else that you should know is that promoting these types of programs and earning massive commissions is much easier said than done.

Just think about it… If someone were promoting an extremely expensive program like Leveraged Breakthrough and they told you that if you bought in you would be able to resell it to other people and earn large commissions, wouldn’t you be suspicious of the whole operation? You would probably be doing research online like you are now in wondering if it is a scam.

Or maybe you wouldn’t… But the point is most people would be suspicious of the whole thing and would be hesitant to buy in.

Things may sound easy but they are not quite so simple. Recruiting people went to high ticket systems like this is very difficult and that is the reason most people fail with these types of systems. After all… That is why the FTC is shutting a lot of them down. People are being told about all the money they can make, they are investing tons and then never recouping their money back.

Okay… So let’s recap here for a second. 3D Wealth Machine is the creation of coach Bob, which is really just a sales funnel to get people to buy into Leveraged Breakthrough. The reason coach Bob is promoting this program is because he is a member and he is trying to earn large commissions recruiting other than, which is what the Leveraged Breakthrough program is all about.

Is it a scam? I will let you form your own opinion about this but I will say that the presentation put on by coach Bob is extremely misleading. It makes this opportunity sound like the greatest thing that you could have ever come across when in reality it is far from being such. Making money with this opportunity is difficult and a very risky game since it requires such a high investment.

You can absolutely buy into this opportunity if you want to, it is your money and all, but I am not going to recommend it. Not by a long shot.

If you are looking for a more legitimate way to make money online in a way that is 100x more affordable, then I would suggest the Wealthy Affiliate training program. This is the program I got started with back in 2015 when I first started looking for ways to earn money online. To make a long story short… I now make a living working online.

Wealthy Affiliate is a great start for beginners because of the step-by-step training and the fact that they provide the tools necessary along with the training, kind of like an all-in-one type of deal. But anyways… You can click the link below to read my review if you are interested in learning more:

Please leave any comments, questions, or concerns below and I’ll get back to you as soon as I can 🙂