Is Amazon Secrets a Scam? – What You Should Know 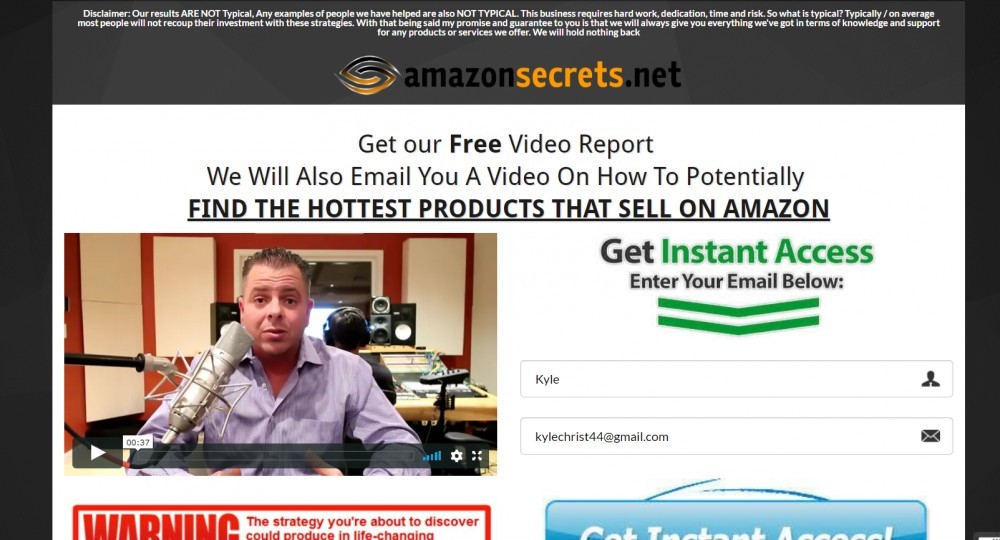 It seems that about half of the “make money online” opportunities out there have to do with Amazon in one way or another. But you have to be careful with what you get involved in because many of them are scams and actually have little to nothing to do with the Ecom giant Amazon. Is Amazon Secrets (at AmazonSecrets.net) just another steaming pile of BS like The AZ Code for example…or is this the real deal?

I have been seeing a lot of people asking whether or not Amazon Secrets is a scam so in this review I’m going to answer that question for you. If you are new to this all there is a lot you need to know. In this review I will be going over a few important things that you are definitely going to want to know before hand.

Upon landing on the Amazon Secrets website you are greeted with a video presentation from one of the creators. Right off the bat things seem a bit strange. The guy says “welcome to the online secrets.com website” in the weird thing is that you you are not even on this website. The program/system is supposed to be called “Amazon Secrets”

But anyways… The guy says that he has some free training videos that he wants to share with you. According to him there is this “inner circle” group of people that he has been training to make money selling products on Amazon and he is now opening up this opportunity to 100 new people. Now whether or not this limited availability is really true is something that I don’t know, but I will say that I do often see false scarcity tactics used when there really are not limited positions. I just reviewed an Amazon related scam the other day called Amazon Cash Websites that used this same tactic.

The two guy’s running this program are Mike Gazzola and Matthew Behdjou. I’ve looked into both of these guys in the checkout. They are real people and they do what they say they do. You are more than welcome to Google their names and looking at them yourself.

The first thing that you get is guidance. Mike and Matt will guide you along the way showing you what you should be doing based on their expertise.

You will have access to a tool that helps you find profitable products selling on Amazon so that you can better choose what you want to sell and have a better chance of success.

Mike will give you access to his sales funnels that you will be able to change up a bit and tailored to fit the product that you are selling.

And besides help from the creators directly you also have coaches on your side. According to Mike, all of the coaches in this program have generated 6+ figures on Amazon, so they know what they’re talking about or at least that is the hope of it.

There or lots of reviews on both sides of the fence. People seem to like it and then there are many people that seem to have lost money buying into this training program and are against it. But this is something you will find with just about any make money online product/program out there. Not everyone succeeds and in industries like this, success is largely dependent on the work that the individual puts in.

There are some extreme cases of failure that you should be aware of. I found some good personal reviews on Quora, one of which was from a guy that claims to have lost over $18,000 from this program. How is this possible? Well after paying several grand to buy into the program he then spent the money to purchase products in bulk from China and have them sent to the Amazon warehouse. Little did he know that the products infringed on a copyright and he then got sued over the whole thing. According to him he claims that Matt guided him through the entire process and kept telling him that the product he had selected to sell is going to be great.

There also some other negative reviews out there, such as ones about the character of the two creators themselves. Apparently this one guy worked for them as a translator in China and claims that they are complete assholes, thinking that they are better than everyone and constantly putting others down. He claims that there are only good at suckering people into their program and leading them on thinking that they will strike it rich.

Take a Look At The Disclaimer

One thing that you should always do before buying into a program like this is taking a look at the disclaimer. Even if the program is a complete scam, which I’m not saying this is, they will usually have an honest disclaimer telling you that the program is a bunch of BS or something along those lines.

When I was on this website the disclaimer was plastered at the very top of the sales page which was nice because it is right out in the open for everyone to see. It states clearly that “typically/on average most people will not recoup their investment with the strategies”.

Just let that sink in for a minute… You more than likely will not recoup your investment.

On the upside, at least they’re being honest. It is better than many other disclaimers I have read that still kind of mislead people.

Now whether or not this is a scam largely depends on your own opinion and how you define what a scam actually is. In my opinion this is not a scam. I do believe the success stories out there and that some people are making good money on Amazon with what they have learned and have been helped with in this program.

Am I crazy to think this? Absolutely not. I was involved in a e-commerce business training program a while back that cost around $3000 (100K Ultra by Aidan and Steve) that I did not succeed with. However, there were people that did succeed and went on to make really good money with their little e-commerce stores. I have been involved in making money online since 2015 and I have come to know that just because something doesn’t work for one person doesn’t mean it doesn’t work for everyone.

Some people are going to fail… That is just the way it is.

I do think that Mike and Matt could be a little more straightforward with what is going on here. They do over-hype this program and use some “shady” marketing tactics to lure people in, which I think they should do away with. But overall the program is definitely not a scam.

Is it worth your money? Should you take out your wallet and throw several grand into it? This is something you are really going to have to think long and hard about yourself. You are also going to have to consider the fact that you will have to invest additional money up front into the products that you’re going to be selling.

I am neither going to recommend nor go against this program. If you want to join then go ahead and do so, just know what you’re getting yourself involved in and know that there is DEFINITELY no guarantee that you will be successful. Just as the disclaimer says… Most people will NOT recoup their initial investment. So if you have some money to play with and are afraid to take some risk then this may be something you want to consider, but if not then I would avoid it.

It has nothing to do with selling products on Amazon, but if you are looking for a much more affordable and much less risky program, that I would say is overall better for beginners, then I would suggest taking a look at Wealthy Affiliate. Wealthy Affiliate is the program that I got involved with back in 2015 when I first started looking to make money online.

The focus of this program is affiliate marketing, which is when you promote products for companies and earn commissions. This means that you never have to worry about inventory, product creation, or anything like that. You simply pick products that are proven to sell and promote them, earning commissions every time you help make a sale

But anyway… If you think affiliate marketing would be something you might like then Wealthy Affiliate is definitely the way to go. They provide the tools and training necessary to be successful in this business. You can read my Wealthy Affiliate review by clicking the button below to learn more.

If you have your own review of Amazon Secrets then I would appreciate it if you left it down below in the comment section. I am also sure that other readers could benefit from what you have to say.

Please leave any comments, questions, or concerns down the comment section below as well. I will get back to you as soon as I can 🙂