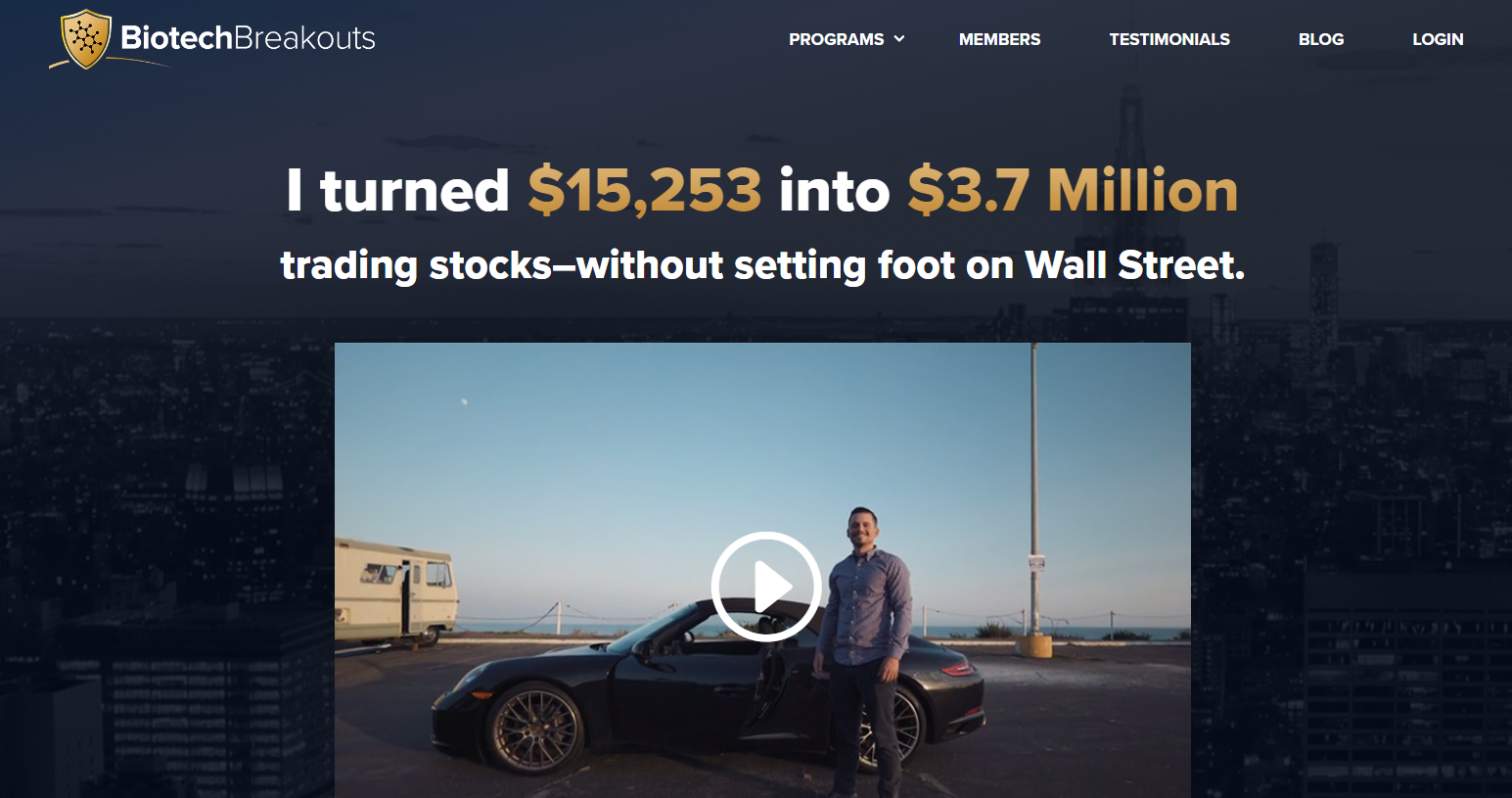 So I recently came across this Biotech Breakouts thing by Kyle Dennis that instantly got my attention. This guy claims to have turned a little over $15,000 into over $3 million in a very short period of time trading stocks in the biotech sector, and of course this Biotech Breakouts product he is selling is going to give you the inside information so that you can to… Or at least that’s what you leads you to believe. But is this all true or is this just a bunch of hype that cannot be backed up? Is this a scam?

In this review I will be giving you my take of it. I am not affiliated with this program in any way so you don’t have to worry about me trying to make it seem better than it is. I’ve done a fair bit of digging around doing research on this is me writing putting it all together.

I first came across Biotech Breakouts when looking into different investment newsletters and reading people’s reviews. I ended up clicking a link at some point that someone posted and it directed me to a video by Kyle Dennis that funneled you into signing up for his webinar which was supposedly starting soon. Here’s a screenshot you can see of it below… 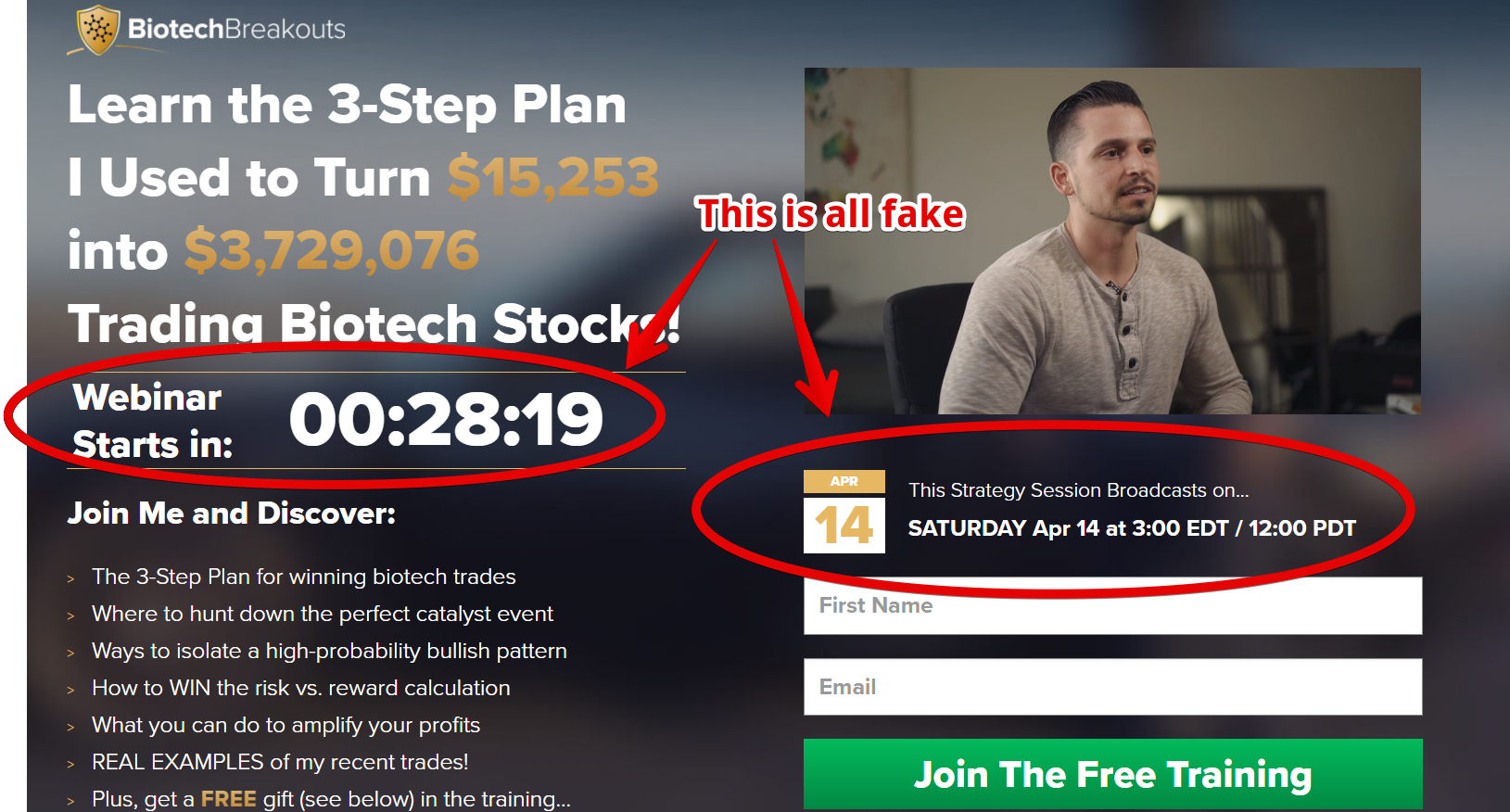 As you can see I circled the times that the webinar supposedly starts in labeled it as fake. This is because the webinar is not life as you are led to believe it is. It is pre-recorded and this countdown timer is just a little tactic used to make people think it’s urgent so that they sign up as fast as possible.

I have reviewed tons of scams that have used tactics like this so it was an immediate red flag for me and made me a bit suspicious.

The next thing that really made me suspicious was that the numbers Kyle was giving didn’t match up. In the screenshot above me that he claims to have turned “$15,253 into $3,729,076” yet in the webinar he claims to have turned $15,000 into $2.8 million. So which is it? This is a very big difference. I guess it is possible that they just didn’t update the numbers on the prerecorded webinar yet, but seriously… They need to get it together. It’s not that hard to do. 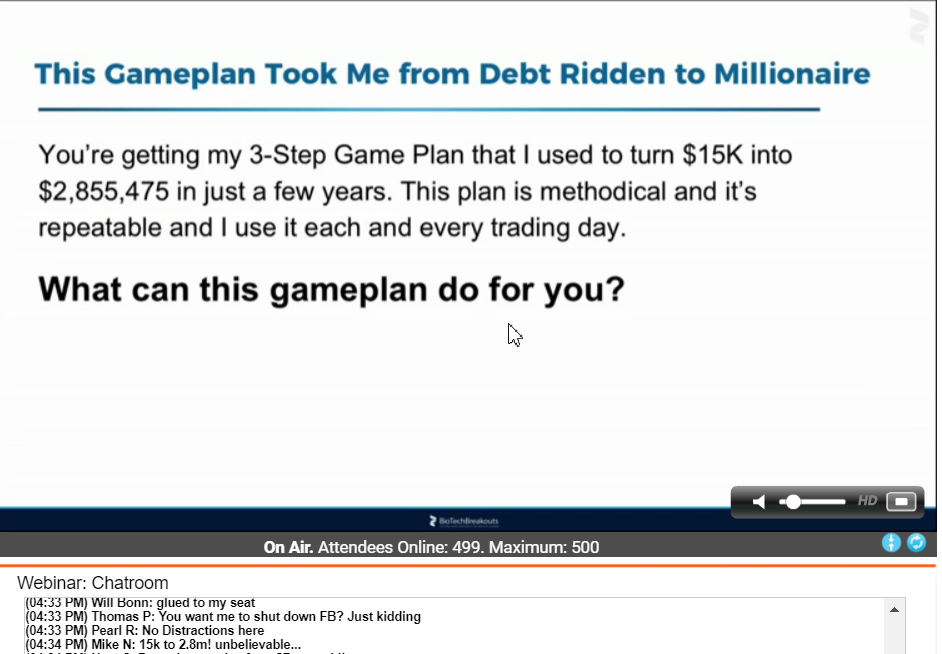 But anyway… I just wanted to go over a bit about how I first came across this Biotech Breakouts thing. I was initially thinking that it was definitely a scam but it seems to be legitimate. Sure the sales pitch is a little over the top and there are some deceptive marketing tactics used that are commonly used for scams, but the product itself is actually legitimate.

What Is Biotech Breakouts Exactly?

Biotech Breakouts is a swing trading newsletter written by Kyle Dennis. Basically what he does is analyze the market, specifically the biotech sector, and alerts to subscribers of what is going on and what trades to make. So the point of signing up for a newsletter like this would be to make money in the stock market, which of course means you would need money to invest before hand.

Kyle Dennis is very young but claims to be “more qualified to teach you how to trade biotech stocks than anyone else”. Now whether or not the statement is actually true isn’t something that I know, but he does seem to be very good at what he does.

He graduated from UCLA with a BS in Biology, having been a pre-med student. At first he started trading as a hobby and realized he could make it a full time job, which he did.

In the newsletter, as I said, he specifically focuses on biotech stocks. His method of trading is swing trading and what he does is matches catalysts up with bullish charts through technical analysis. So basically first he looks for upcoming news that could cause a stock to skyrocket and then make sure that the price chart looks okay based on technical analysis.

In the webinar he gives the example of using biopharmcatalyst.com. This site provides a free information on upcoming company events and data releases that could drive the stock way up. So what Kyle will do is buy into a stock before such information is released when the price is low, ride the profit up and sells out before the news actually hits. This is what some people call “buying the hype and selling the news”.

The majority of reviews that I have found on the internet have been ranting and raving about how great this is, which honestly is kind of strange. For example: on TrustPilot, which is an independent review site where anyone can go and post reviews of various products, it has 0ver 200 reviews with a 5/5 star rating… 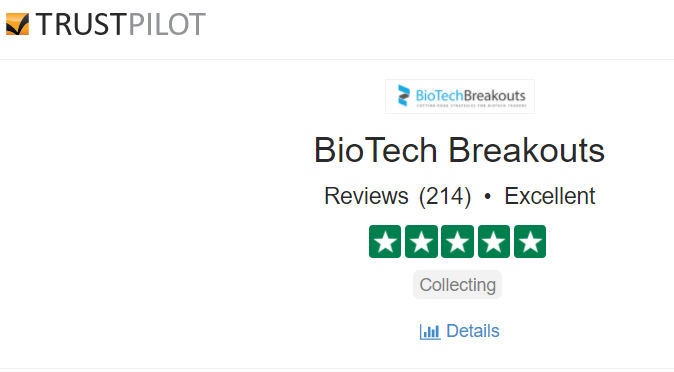 Over 200 ratings and a perfect 5/5 stars? Are you serious? This is very strange to me. I review investment products/services like this quite often, for example The Bauman Letter & Cash for Patriots, and to see this number of reviews with pretty much every one talking about how great it is seems strange. 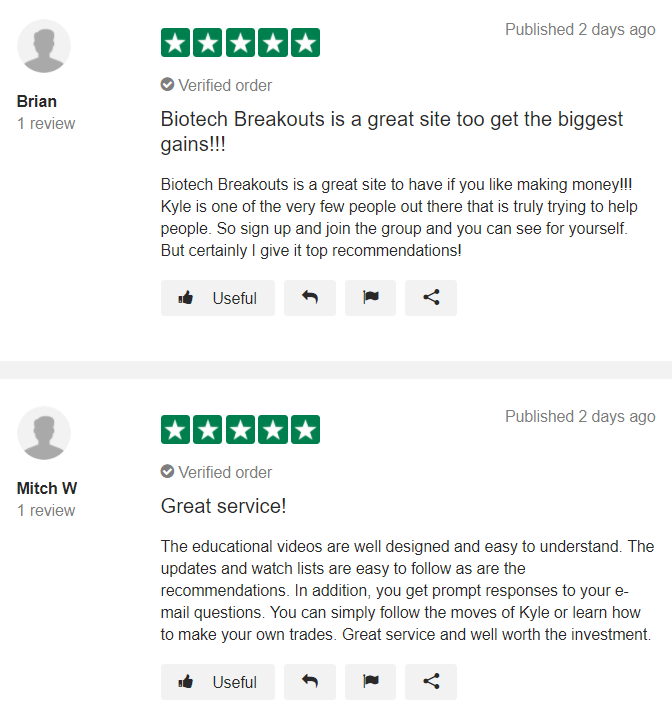 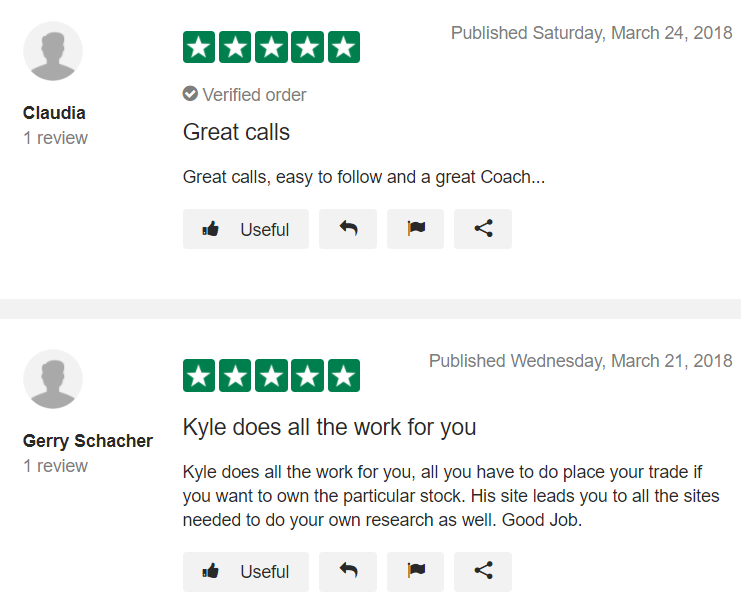 I don’t know. Is it just me or do some of these reviews seem to be fake? Some seem to be legitimate but there are many that didn’t really come across as real to me. This is just my opinion though.

There are some negative reviews but you really have to sift through all the positive ones to find them. They are overwhelmingly drowned out by reviews talking about how amazing this all is.

One of the reviews I came across here is suspicious that Kyle Dennis might be capitalizing on Pump and Dumps and using his subscriber base to make it all possible. Basically what this means is that Kyle would invest in stocks, recommend them to his subscribers such as you so that they buy in and drive the price up, then he would dump his shares. Now this is one heck of a claim which there is no proof of but its worth thinking about. 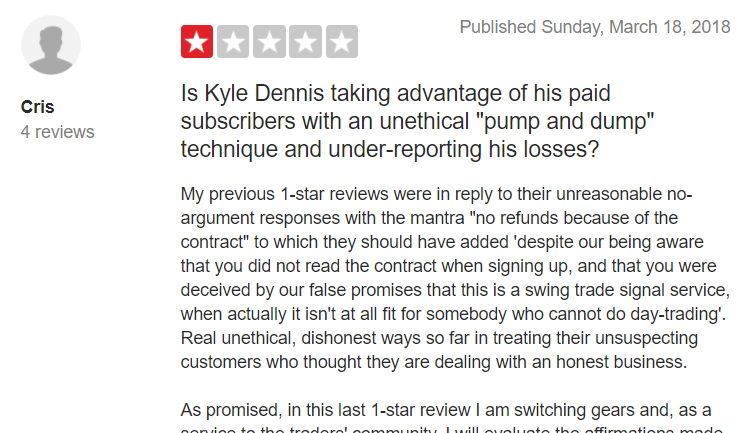 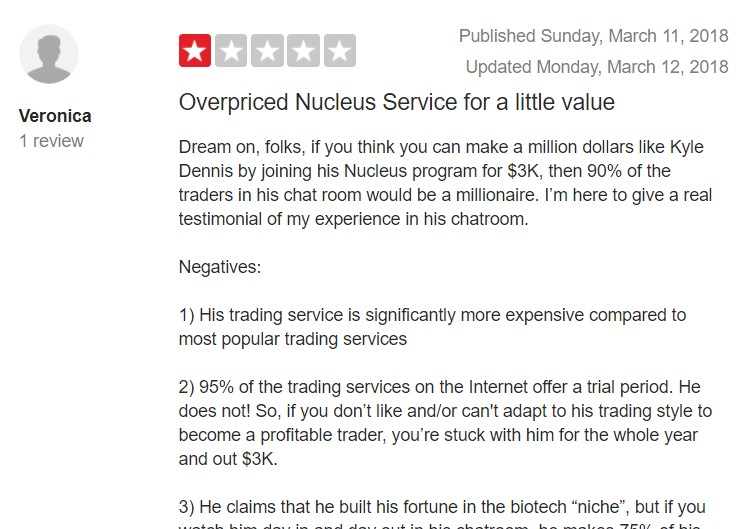 What Do I Make of All of This? What Is My Opinion?

I know this may seem a bit confusing. First I was making it seem like Biotech Breakouts is a scam, then I was saying how it wasn’t and explaining how it works, yet then when going over user reviews I was giving the impression that it was not legitimate yet again. So what the heck should you make of all this?

Well I definitely think that Biotech Breakouts is legitimate. Kyle knows what he is doing and provides good information. I just think this is a great example of a good product that uses overly “salesy” marketing tactics. Much of the webinar is misleading and many of the reviews out there appear to be fake in my opinion, yet the product seems to be legitimate.

Of course we can all form our own opinions of this but this is what I think based on the research I have done. If you are a subscriber of Biotech Breakouts and have been so for a while I would love to hear your opinion of it and if you wouldn’t mind leaving a comment down below that would be great.