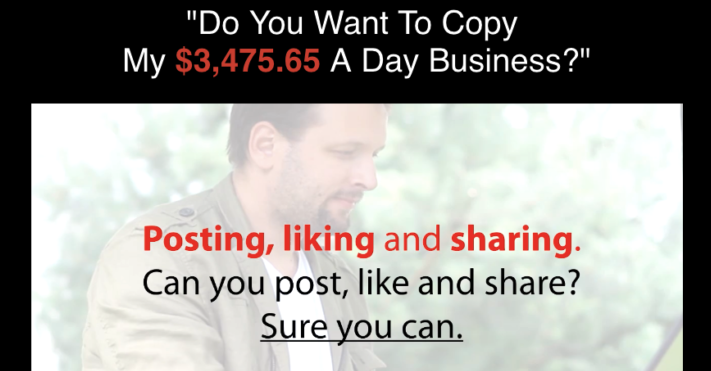 FB Freedom System pretty much claims to be the easiest system ever for making money online. They make this opportunity sound incredible, but is it really so? Or is FB Freedom System a scam like it seems to be? I mean, after all… if it sounds too good to be true then it probably is. That is a good rule of thumb to go by and has saved me from getting scammed before.

I know there are a lot of people looking into this system and are suspicious of its claims. This is the reason I decided to write this review. I’ll be going over a few things you should know and will be giving my honest opinion of this all.

Talk about making some seriously bold and quite unbelievable claims… FB Freedom System claims that if you use their system you will be able to make $300 to thousands of dollars per day…. and of course its as simple as can be. All you have to do is use Facebook. Just by posting, liking, and sharing they claim you can make this amount of money.

I understand how awesome this sounds. After all.. just about everyone uses Facebook these days and posts, likes, & shares anyhow… so why not make a couple hundred thousand dollars per year doing it.. right?

Unfortunately this just isn’t going to work out.

There are a lot of signs that this program is a scam. Of course the first one that you will notice is the absolutely ridiculous claims that I just went over. Come on now… making thousands of dollars per day just by using Facebook. It is never this simple.

I know it is possible to make a lot of money using FB. Of course if you can get your posts to go viral you could promote products and earn money that way. But this is something that is darn near impossible to do. And of course you can always advertise on FB which has massive potential, but this is an entirely different ballgame and is not easy.

If it were as simple as it sounds to make this kind of money on FB then the reality is that everyone would be doing it.

Another major red flag that screams out SCAM are the testimonials in the sales video. They are as fake as can be. I recognized the one woman right away in the one video. These people are not real members that have actually tried out this system. They are just paid actors. You can go to Fiverr.com and hire people to fake testimonial videos like this for $5.

So would you trust a system that paid people to make fake testimonials? If it were real and were really as good as they claim then why not just get people that have had success from it to film testimonial videos? I’m sure that they would be more than happy to if it changed their life around and gave them the financial freedom that everyone wants.

I’m not going to lie to you and say that I bought into this system and tired it out because I haven’t. And guess what? I have not plans of ever doing so.

There is no way that this system is legit. I would be willing to bet my life savings on it that is how confident I am.

This is nothing more than a scam that is going to disappoint a lot of people. It is preying on those desperate to make money and is doing so by using Facebook’s name as a way to promote it. I would never recommend that anyone use this system.

If you are looking for a legitimate way to make money online then I would suggest reading about my no. 1 recommended program here. I started with this program back in 2015 and am still a member to this day. Its an honest program that teaches you to make an honest living online…. simple as that.