Meaghan Harper’s Greedy Mentor system can supposedly make people thousands of dollars within just 24 hours, or at least that is what you are told. However, can it really? Things sound a bit too good to be true, do they not?

Is it possible that Greedy Mentor is a scam that is just going to leave you with less money than when you get started? Should this be something that you avoid at all costs?

Unfortunately… This is not the awesome “get-rich-quick” opportunity that it is presented as. This is what you would call a scam and in this review I’ll be exposing it as such. There are a lot of lies that you are told and this is definitely something that you are going to want to avoid.

When he then on the website for the Greedy Mentor system, you are greeted with a video presentation that starts out with a bunch of people talking about how they have been using the system and making tons of money, such as “Bobby Marshall” from Little Rock, AR, and Leeanne Bakker from Tustin, CA… 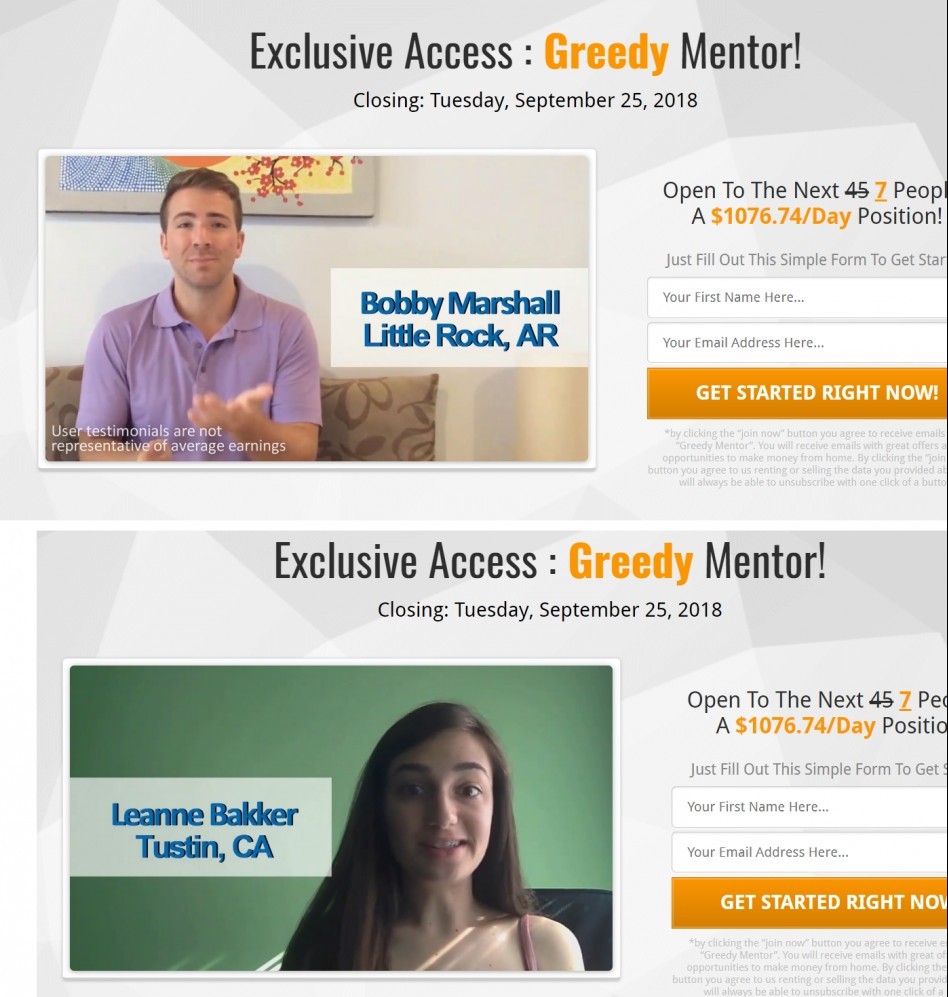 However… Is it just me or do these testimonials seem a little bit fake? For some reason they just don’t seem to be genuine and I have reviewed plenty of scams before where testimonials like this have actually turned out to have been paid actors… So I am always hesitant to trust what I see (these are fake as I will go over shortly)

But anyways, Meaghan talks about how you have been specially invited in doubts that you stumbled upon the website by pure lock. She claims that she is only letting a handful number of people in and that you are one of the select few. HOWEVER… The real reason you landed on this website is probably because you got some spammy email from someone claiming that you can make a ton of money with some new system… Or something along those lines.

She claims that this system has taken people from nothing to over $1000 per day within just 24 hours… And of course it only takes 15 to 20 minutes of work per day.

Everything about this system sounds like a scam to me. It sounds pretty much like you are typical get-rich-quick scam… Being able to make money super fast with very little work.… Which never works out. Sounds like Daily Cash Siphon or the Secret Affiliate Scam.

How Does This System Work?

One major problem that I see, and a major red flag, is that she never really explains to you how the system works. She claims that she is paying people in mentions that you also can be on “her payroll”, but I still don’t really know what is going on here.

If you ended up entering your name and email, you know that there is a second video presentation. In the second video she claims to have set up your account and that her team set you up with a pre-made website. And of course she checks back on your account in several minutes and it all of a sudden has made tons of money.

But how does this work? Well… I HAVE NO IDEA because she never explained it. The explanation that she gives is that it “gives you ability to manipulate and flow all online traffic to your gateway”…

But what the heck is that supposed to mean? I have been making money online since 2015 and I have no idea what the heck this means, which is probably the point. It sounds awesome, but is so vague that no one is going to be able to make sense of it.

Obviously the fact that we have no idea what we are getting into with this Greedy Mentor system is a major red flag. We have absolutely no idea how the system works other than some very vague information given, which really doesn’t tell us much of anything.

In in addition to this there are some other red flags that caught my attention, which are common for online scams. These include…

#1 – Video Will Be Taken Down at Midnight – Not True

In the video presentation Meaghan claims that this video will be taken down at midnight, so you have to act fast if you want to get in on this. However, this is completely untrue. I know this for a fact because I came across this video yesterday, and am writing this review on the day after… But the video is still there. 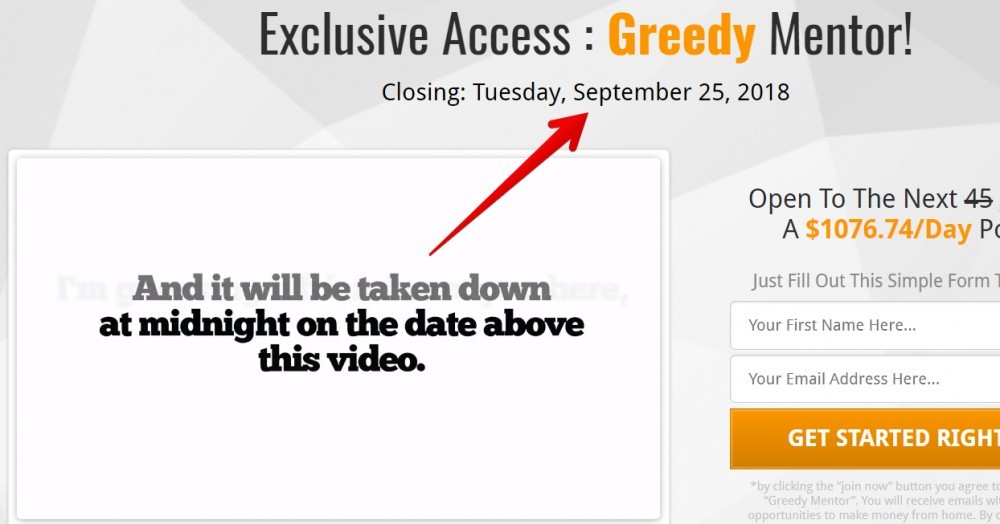 This is a common scam technique. She is just trying to get you to buy into the system as fast as possible.

Something else that is very suspicious is that there are multiple discounts given to try to get you to buy in. I’ll show you what I mean…

If you try to leave the page, you are first presented with a “WAIT!”, Telling you that you can get this system for only $67… 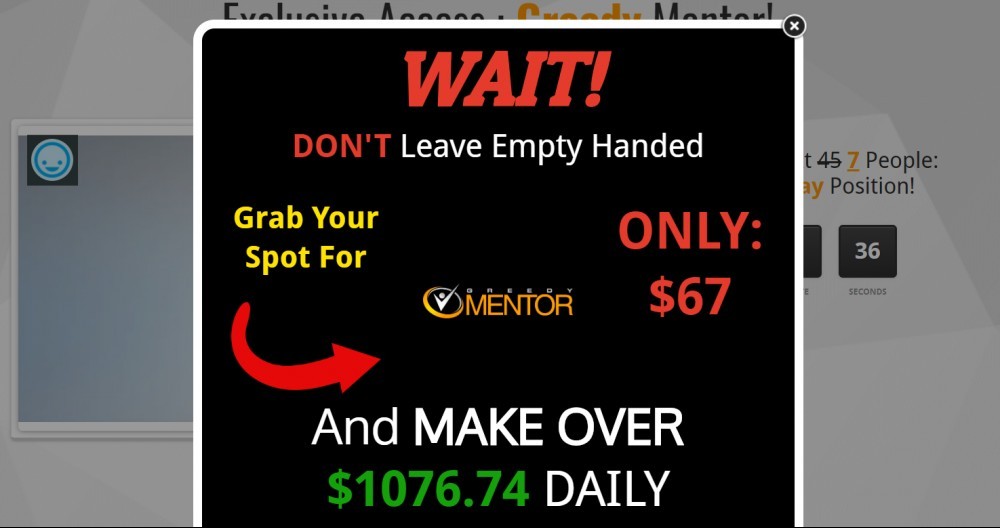 However, what I did is tried leaving a second time and then another discount popped up, this time a “huge 81% discount”. So now I am able to buy into this scam for just $37… 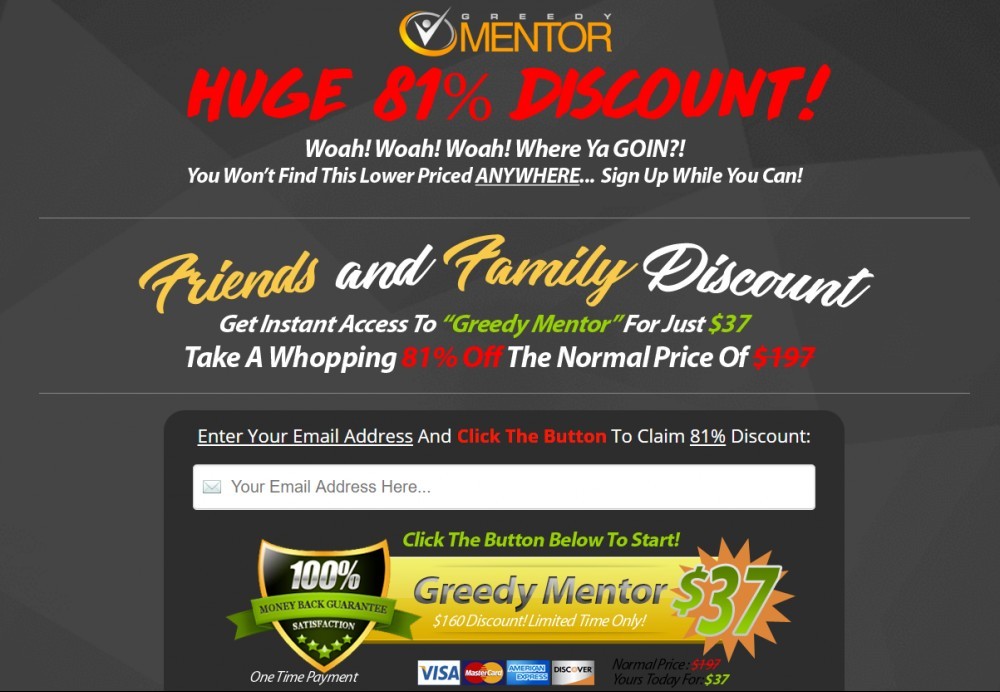 But it doesn’t end there… I then tried to exit again and was able to get the price down to only $27, but this was my “absolute last chance!”… 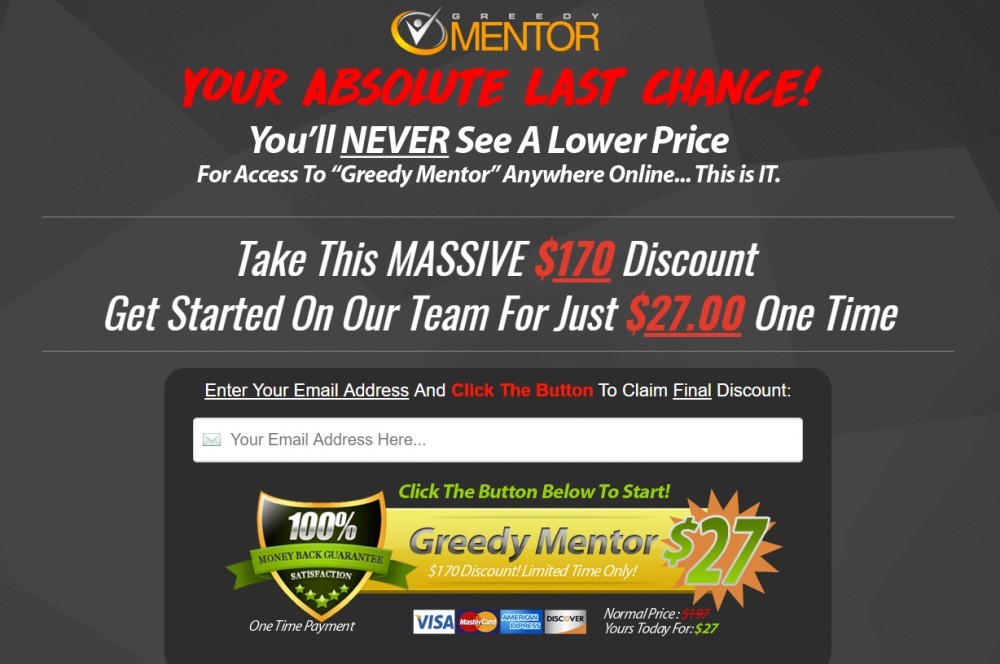 Now discounts certainly do not mean that something is a scam, but when you see multiple discounts over and over again like this, it is definitely suspicious. It is something that is also very common with online scams, from what I have seen reviewing hundreds over the years.

This entire system is supposedly the creation of “Meaghan Harper”, but who is this lady?

Well… I don’t know who she is but I can tell you who she isn’t. She isn’t the woman that is pictured in the video. I ran a reverse Google image search for the picture shown and found out that it is just a stock photo that anyone can purchase on Shutterstock…

I knew this picture was going to be a fake as soon as I saw it. Not only have I seen this 100 times before with other scams, but doesn’t it seem a bit strange that she would put a picture of herself kayaking in a bikini

What I found from my research on this website, there are many things that point to this being a scam. However, if you are still not convinced, I’m sure this will convince you.

One thing that you should always do if you are suspicious of opportunities like this, is find the disclaimer. Usually is located at the bottom of the sales page, but other times you might have to do some looking around.

Now I don’t know if you can read the text I underlined, because it is small, but what it states is that “the typical purchaser does not make any money using the system”.

Yes… That’s right… They tell you that most people who by this do not make any money. However… In the video presentation she talks about how this is super easy to make money with and that can easily take you from zero dollars to over $1000 per day in just 24 hours.

So which is the truth? Which you should you believe?

The truth is in the disclaimer. What I have found is that scams like this can tell you anything that they want to in the sales pitch. They can lie to you and tell you about how you will be making thousands or millions of dollars, which may be completely untrue, but as long as they tell you the truth in the disclaimer I guess it is legal.

There is obviously no way I’m going to be recommending this system to anyone. There are so many lies told throughout the video presentation that you cannot trust this place at all. Meaghan Harper is a lie, the people in the testimonial videos are all lies, and we have absolutely no idea how the system works.

Sounds like a pure scam to me, but of course you are able to do whatever you want with your money. So if you really wanted to buy into this, you could do so… It just definitely is not recommended.

If you are looking for a legitimate way to make money online I would suggest taking a look at how I went from $0 to over $6000 per month online. In this post I explained exactly what I do, how it all works, and even go over how beginners can get started doing the same.

But anyways… I hope you found this review helpful, and if so please like and share this post to help spread the truth so that others don’t get scammed. Also, leave any questions or comments below and I’ll get back to you as soon as I can 🙂