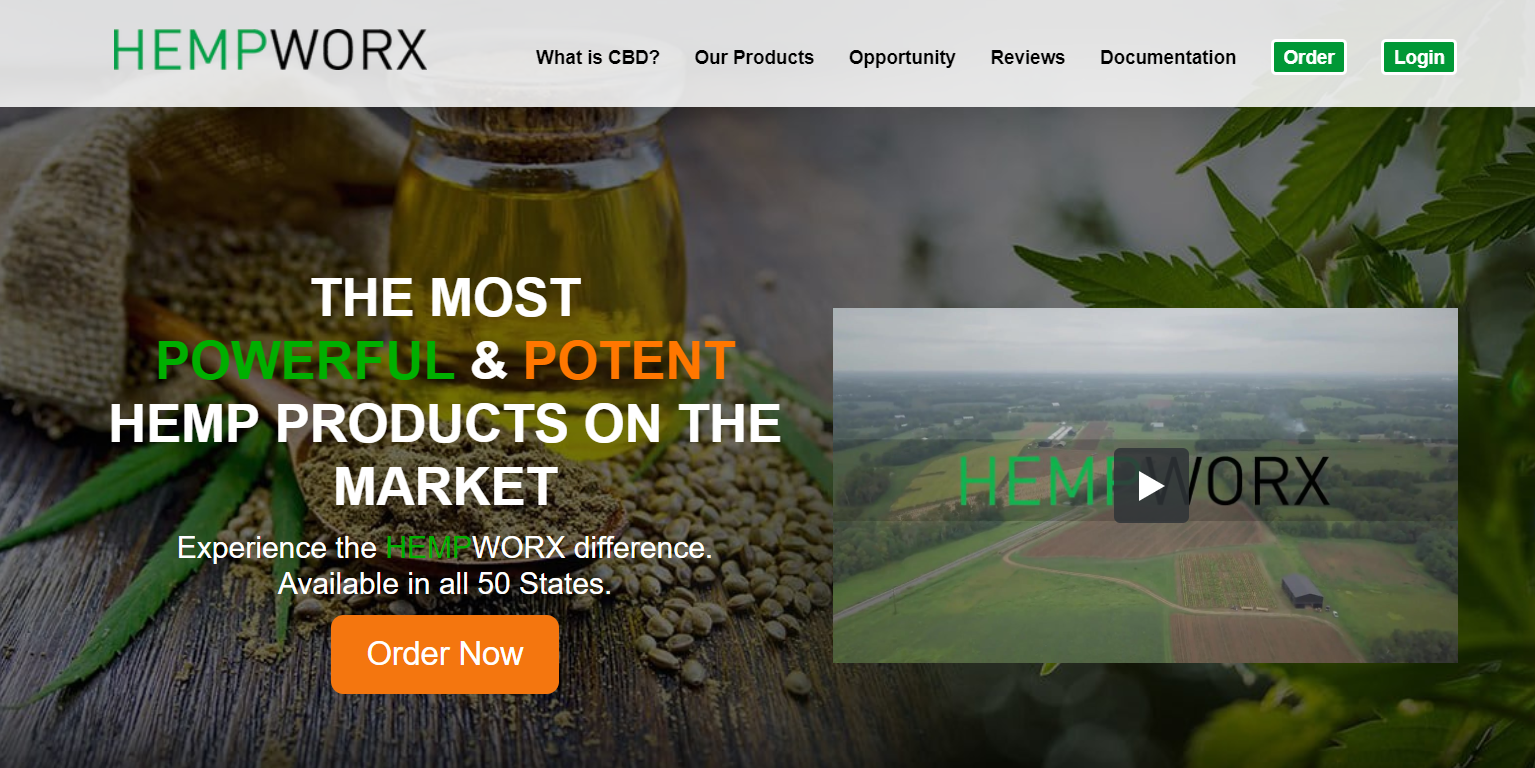 Is Hempworx a Scam?.. Pyramid Scheme Maybe? – My Review

Hempworx claims to provide “the most powerful and potent hemp products on the market”. But are these products really any good? Or is this whole business just some big  pyramid-like marketing scheme that doesn’t live up to the hype? Is Hempworx a scam?

There has been a lot of attention surrounding this business lately so I decided to finally get to writing my review of it. And as a disclaimer: I am not affiliated with Hempworx in any way. So I’m not going to be trying to make this sound better than it really is. I’ll be reviewing both the products that the company sells as well as the business opportunity that they present. But mostly I’ll be focusing on the business opportunity because I know there are a lot of people out there wondering if this is a pyramid scheme or not and this is something that I want to address.

Hempworx it is a MLM (multi-level marketing) company that sells cannabis based products. In particular their products have what is called “Cannabidiol” or CBD. As they stay on their website, CBD is one of over 85 cannabinoids that is known in the cannabis plant. Cannabinoids such as this are increasing in popularity a lot recently due to many of the health benefits they have been found to have.

While there is a lot of hype surrounding this new emerging industry, much of it is well deserved. The health benefits of cannabinoids are becoming more and more well documented and proven with scientific testing.

Hempworx’s products consist of skin creams and drops that contain this CBD. Skin creams are supposed to revitalize your skin health and make it look younger and healthier, and the drops are supposed to be ingested, in drinks or however you want to ingest them really, to improve your overall health.

Are The Products Worth The Price?

This is debatable, but in my opinion they are definitely overpriced. If you go to purchase through the website you will see that it cost $69 plus shipping for all of the products below… And for the 750 mg bottles cost an extra $20. It is common to see inflated prices like this with new emerging markets that have a lot of hype surrounding them… They capitalize off of all the excitement. 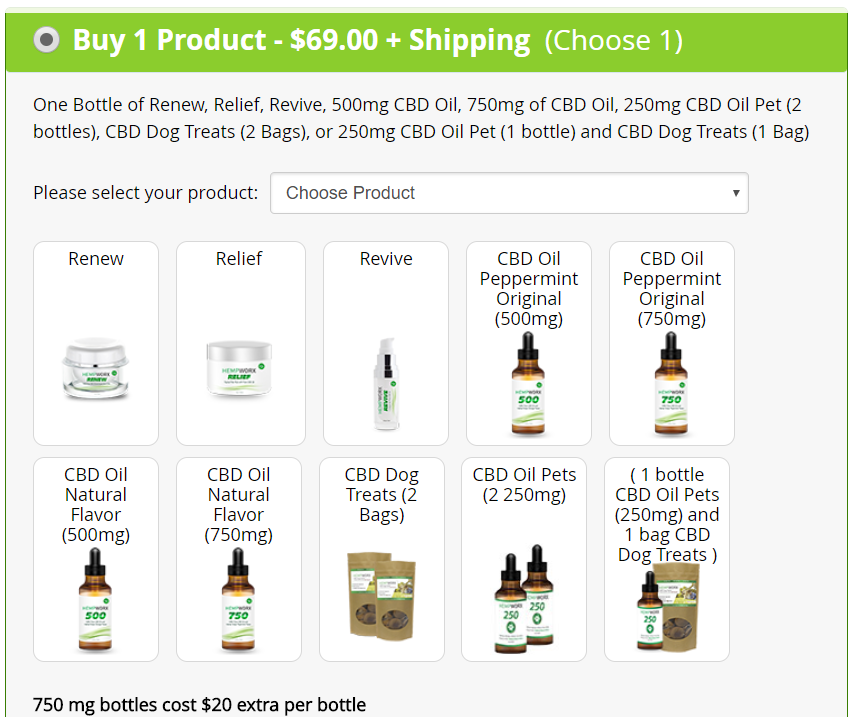 Now will these products work? Or they really what they say they are? Well… Although there is more and more scientific proof of the health benefits that these can provide, it is still all pretty new. But if you want to know my opinion… I’m all for cannabis-based products.

Another reason why these prices might be so high is because this is a MLM business, which are well-known for having overpriced products like this.

Since you are reading this there is a good chance that you were approached by an affiliate of Hempworx and asked to join the company, even there is a reason for this. The reason is because affiliates of the company and recruit in other affiliates to join and make money off of their efforts.

MLM businesses have pyramid -like compensation structures where there are multiple levels and affiliates are able to earn commissions from the people that they recruited in, the people that those people recruited in, and so on. You will also be able to earn retail commissions from the products that you personally sell. How it works is like this: you will be able to receive a 25% discount on the products, which you can buy in then sell at the normal retail price, earning a profit. 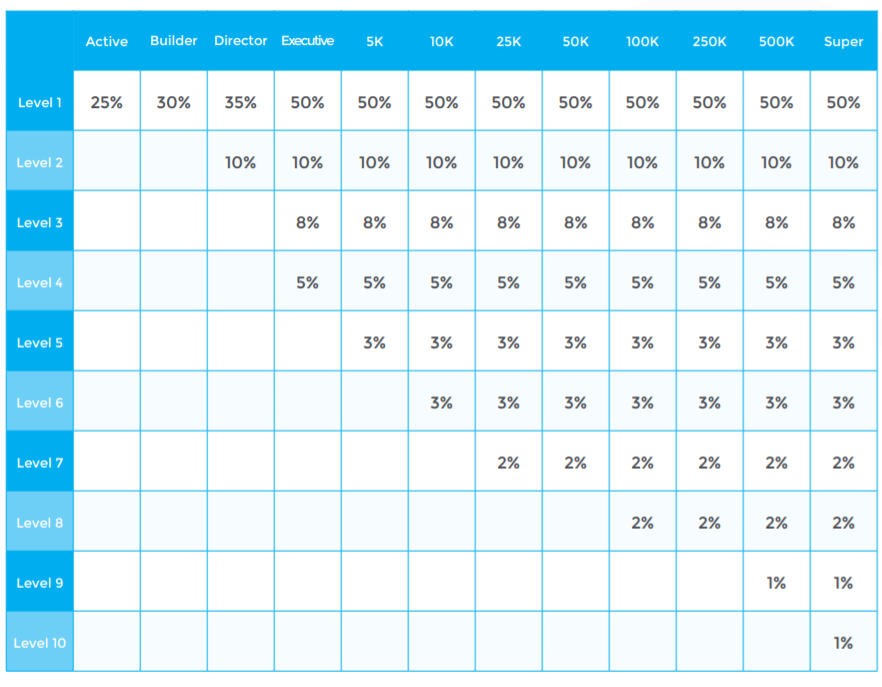 So they give the example if you were at the rank of “Executive”and were selling the Spray Package. As you can see you earn the highest commissions from the levels closest to you and as you go down the pyramid -like structure the commissions get lower and lower. It’s kind of like a trickle effect where the money trickles up the pyramid from those beneath you and into your pockets. 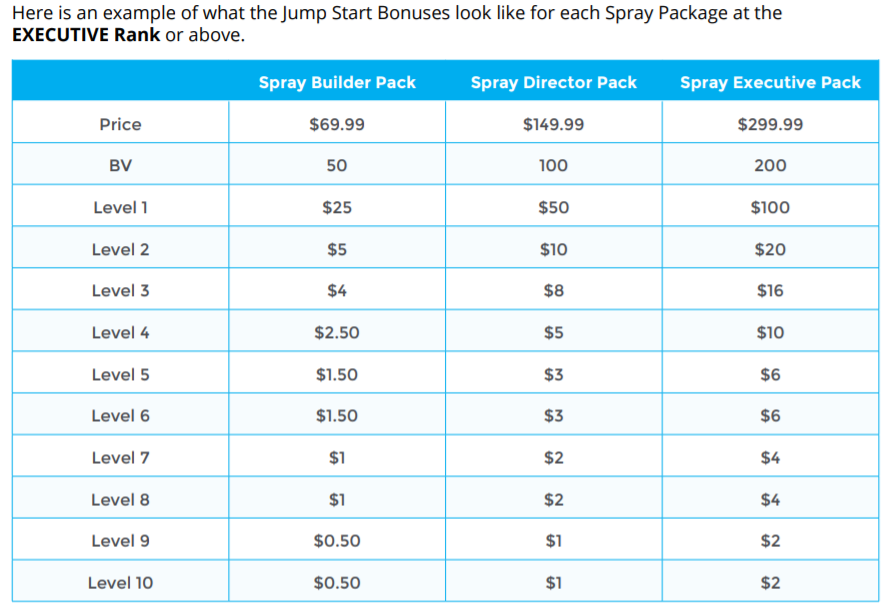 There is also a binary compensation structure in place but I’m not going to get into that here. It’s the same sort of deal where you earn commissions from the people beneath you.

And one thing that is very important to know is that there are many different ranks in this commission structure. The more products you and your team (a.k.a. your downline) sell the higher you will move in the ranks, which will allow you to unlock more of the compensation plan. When you just start out you will not be able to earn anywhere near 10 levels down as was shown in the example above as if you were at the Executive rank.

As you move higher and higher up the ranks the focus begins to shift more towards recruitment and less on your personal sales.

Sounds Awesome… But There Is a Downside

MLM’s sound awesome. They sound like an incredible way to make money, but there is a big catch. The catch is that they make it much more difficult to make money for most of the people involved in them. The reason is because of their pyramid -like structure, where the money gets taken away from those at the bottom and paid to those above them in the form of commissions. So pretty much the people low on the totem pole earn less money than they could potentially be making if there wasn’t a MLM structure and the people high up earn more money. And of course there are always a lot more people on the bottom of a pyramid -like structure which means that the overwhelming majority of people will find it more difficult to make money with.

Which is why mlm businesses always have very uneven income distributions. I review opportunities like this all the time… Rodan and Fields, American Income Life, you name it… its always the same deal when it comes to this.

Pretty much what it all comes down to is how and where they make their revenue. The more revenue that a MLM business makes from sales to the general public, the more legitimate they are.

Conclusion on Hempworx – Good Opportunity or Not?

I would love to try some of these products but I’m not willing to spend the money to do so. It would just be too expensive to purchase these month after month.

And as far as the business opportunity goes, this depends on you. Its not a scam in my opinion but this doesn’t mean its a good opportunity, as you can tell from what I discussed about mlm’s above.

For me there is no way it’s worth it because I just don’t have that salesperson type personality where I would be able to recruit people in left and right. Because the bottom line is that make good money with this you are going to have to recruit others in, and you are going to want to do this consistently. If you don’t you will not be taking advantage of the compensation plan, instead it will be taking advantage of you.

So join if you want but just know that MLM business opportunities like this or not easy to make it in, which is why they always have extremely high turnover rates.

Something else that you might be interested in taking a look at since you are looking to make money with your own home-based business is how I make money online. You can read my make money online guide here where I go over what exactly I do, how it all works, and what I considered to be the best way for beginners to get started.