Is Mingle Cash a Scam? – What You Should Know 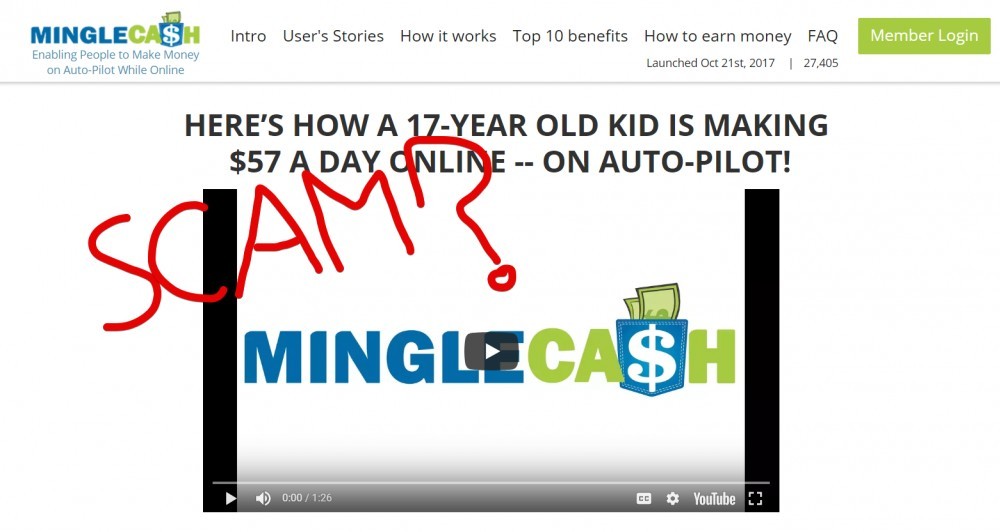 Mingle Cash is a program that I have been seeing promoted online a lot as a good way to make money, but is it really? I’ve seen plenty of different programs/systems that people tell you are amazing but have looked into them and found out that they are complete waste of time. Is Mingle Cash a scam in one way or another? Will it be a waste of your time? Or is this the real deal?

The truth is that this place is not nearly as good as some of the promotional material lead you to believe that is. In this review I’ll be going over the reality of things. I’ll cover how you actually make money with this program, how much you can realistically make, some of the lies and misleading information that you are told, and more.

Mingle Cash is a GPT website that was created by a guy named Andrew Gitt. GPT, if you are unfamiliar with this acronym, stands for “Get Paid To” and these types of websites basically just pay users to perform very simple tasks, some common ones being taking surveys, signing up for free trials, surfing the web and more.

They make it seem like you and make tons of money surfing the web and referring other people to join, but the reality is that you more than likely will not make much. I’m not saying it is impossible. It is possible… Just very unlikely.

They have software that you have to download and install to your computer, which will then allow you to surf the web and make money. How will you make money surfing the web like this? Well the software will display advertisements and what you will have to do to actually make the money is click on the ads. So you don’t actually get paid for surfing itself, but rather for clicking ads that appear as you are surfing the Internet

And I will get into the referral program, where you can refer people into make money doing so, shortly. First I want to go over some of the other ways to earn which include three different sections, Play & Earn, Watch & Earn, and Offer Wall…

Inside the dashboard you will see a section where you can “play & earn”. This section includes games that you can play and earn money. The reason they pay you to play these games is because there are advertisements that you will see and of course companies are paying them to show these ads.

It is the same type of deal when it comes to the videos. You will be able to watch videos and earn money because there also be advertisements displayed that you will see.

The Offer Wall includes a lot of different things. You can earn by downloading apps, subscribing to free trials, taking surveys, and other things.

Overall you will not make much money at all with any of these GPT tasks, especially playing games and watching videos.

Is This Really As Amazing As They Say?

Nope. The short answer is no, it is not.

Playing games, watching videos, and surfing the web will not make you much money at all. There are plenty of different GPT websites out there, like Swagbucks & Time Bucks for example, but none of them pay very much money.

The main way to make money with this program is what the referral program, which is the reason you will see people going around promoting it like crazy.

This creates a pyramid -like structure that branches out towards the bottom in funnels earnings up to you who are at the top of your own little pyramid.

How much will you earn off of each person?

It depends, between 1.25% and 5%. In order to earn 5% you will have to view at least 40 ads per day. And when I say you are earning from the people beneath you, what I mean is that you are earning a percentage of what they earn.

On the promotional page for Mingle Cash they give you an example of how you could make up to $24,000 per day from the referral program. While this is possible, this is one of the most ridiculous and absurd claims I have ever seen. The chance of this happening is pretty much 0%.

If you are just an average person then there is absolutely no chance this is going to happen. You’re going to have to have a means to make mass referrals if you want to fill up a downline 10 levels deep like this. So you’re either going to need a massive social media following, a website that gets tons of traffic, or some sort of resource at your disposal to refer tons of people, which most people don’t have.

In addition to this, many of the people that you do referring to this program are going to end up quitting once they find out that it is a waste of time. The example below assumes that everyone continues to make money with all the GPT offers. 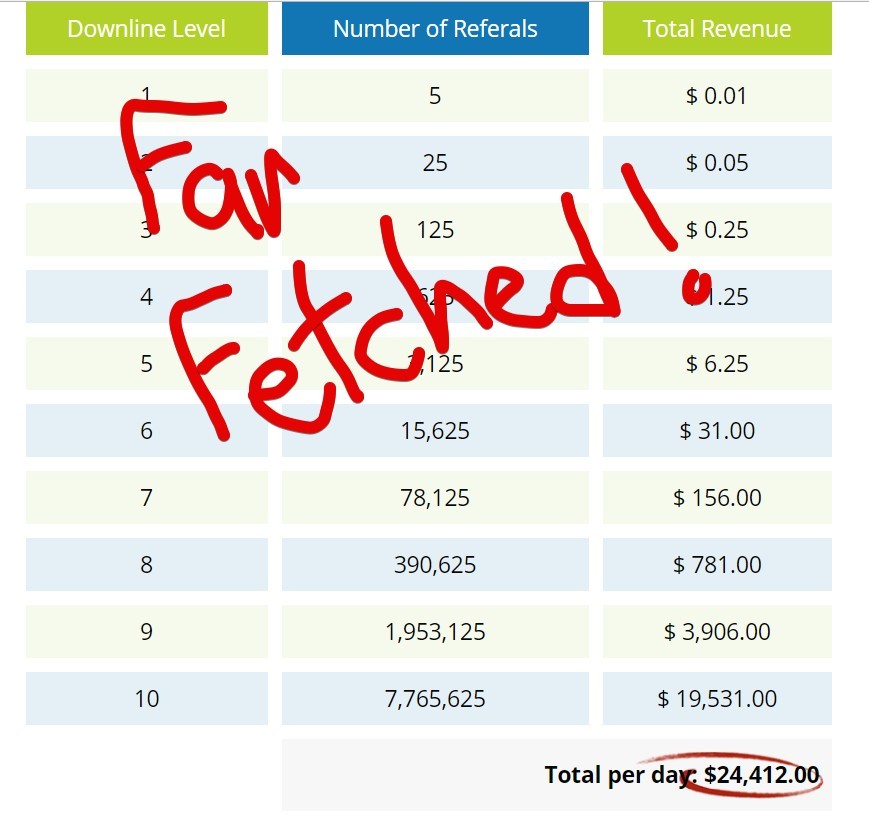 All The “Success Stories” Are Fake!

Something I also want to bring to your attention is that all of the success stories that are shown on the promotional page are fake as can be.

As soon as I came across these testimonials I knew they were too good to be true. The one below it is of a guy named “Bob Wilson” who talks about how Mingle Cash changed his life for the better. I ran a reverse Google image search and found that the picture used here is actually a stock photo that can be purchased by anyone used online. It is a fake! 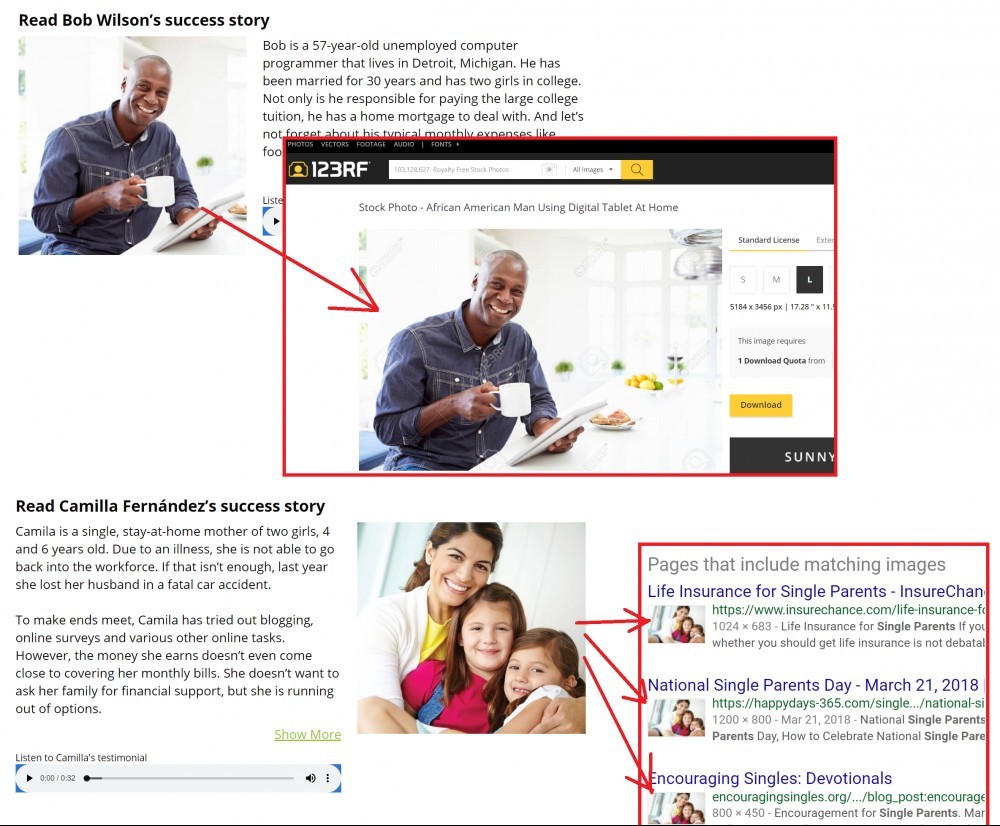 And the same goes for “Camilla Fernandez”… Her testimonial is fake as well. I did the same thing here, ran a reverse Google image search and found that this image is used on many different websites, which probably means that is also a stock photo.

The Video Testimonials Are FAKE Too!

Also on the website they show user video reviews from people of claiming that this program is amazing. As soon as I saw the one woman in the video I recognized her immediately. I have seen her before and other testimonial videos in that is because she is actually a paid actress that you can hire on the digital freelance marketplace  Fiverr.com.

The guys testimonial video is also a fake. These people are just saying what they have got paid to say… 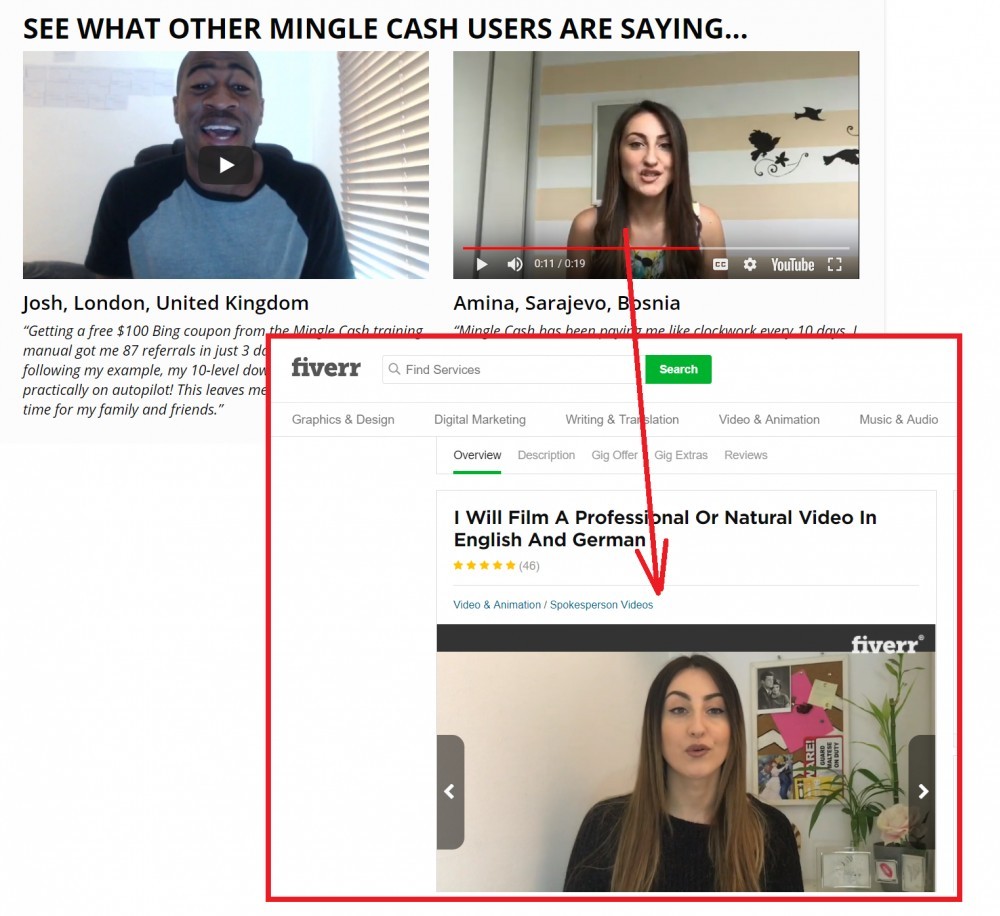 Now I wouldn’t call this place a complete scam, but I guess this is largely based on what your opinion of a scam is. You can make money with this program, it is just that they mislead you a time and make you think that you’re going to make good money or even possibly strike it rich, which is far from the truth.

On a positive note, they do provide you with an e-book that has some valuable information when it comes to making money online like this. So that is good. The downside is that making money with GPT websites is largely a waste of time. There just isn’t much money to be made in this industry because there is no need for these types of websites to pay out anymore. They get plenty of people to take their surveys, watch the videos, play their games, etc. for very cheap.

If You Are Looking To Make Good Money Online…

You can click the button below to see what exactly I do, how it all works, and I’ll show you the best way for beginners to get started…

Please leave any questions, comments, or concerns below and I’ll get back to you as soon as I can 🙂 Also, if you have your own review of Mingle Cash I would appreciate it if you also left that below. I am sure that other readers on my website would to find it helpful to get someone else’s opinion on things.