What Is Smart Dollars Club? – Short Answer: A SCAM!

Smart Dollars Club claims to pay up to $150 per survey, but are things really as they say they are? Or is this just another stupid scam that is going to waste your time and cause you trouble?

It is no wonder why you are suspicious of this place and decided to do a little bit of extra research before moving forward. Most survey sites don’t pay anywhere even relatively close to $150 per survey. That is an absolutely astronomical amount of money to be paying for short online surveys. So should you be suspicious? Absolutely.

Anyways… In this review I’ll be going over what exactly Smart Dollars Club is and what is really going on here… Which is not what you might think and not what you are led to believe.

What Is Smart Dollars Club?

In short, Smart Dollars Club is a scam. No ifs, ands, or buts about it… It is a definite scam.

They lead you to believe that you simply sign up for this site and they then send you surveys that pay up to as much as $150. Now there are a lot of survey sites out there that will pay you to take surveys like this, by sending them right to your email, but as I mentioned above… They pay nowhere near $150.

How survey sites like this normally work, such as Inbox Dollars, is as follows…

Smart Dollars Club does not work anything like this. Not even close and I will show you my experience with this place…

My Experience With This Scam

I was very suspicious right off the bat because I have reviewed many different paid survey sites before and none of them offer anything even close to $100 bonuses. But anyways… I was interested so I decided to enter my email and have them send me my $100 survey

within a couple minutes I received an email that provided me a buy in for my first survey and said that I would be able to get my $100 reward via PayPal, gift cards, or cash, as you can see below…

So I clicked on the button and sure enough… I was blocked. My Internet security software would not allow me to go to the page that the link was directing me to. It is said that the reason was due to spam on the website I was being sent to. Now this does occasionally happen even when I am going to a legitimate and trustworthy website, but 99% of the time this security software does a very good job and because it blocks me from being directed to this survey site I became more suspicious that this was indeed a scam.

Soon after that I was sent another email that said Congratulations!… And went on to tell me that they have reviewed my resume and I have qualified to participate in their surveys program. They claim to only accept less than 1% of all applications and this made me feel special.

However… I never sense in any resume and this email was a complete lie. The only information I ever gave to this place was my email when I submitted it to receive the $100 survey bonus. 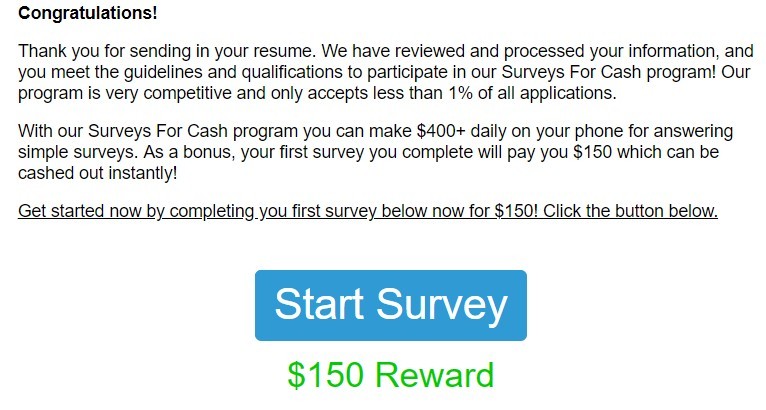 This new email was telling me that they had another survey available for me to complete and that it would pay a $150 reward. Sure enough… My Internet security software would not allow me to access the survey either.

Now I could have changed the settings in my security software to allow me to access this website, but I really was not in the mood for getting a virus on my computer so I decided to stop trying to take these scam surveys.

I decided to do a little bit of research online and found that this place doesn’t even direct you to surveys like they say they do. They might direct you to complete a survey or to sign up for a survey site, but basically they are just directing you to a bunch of random places, including Bet365 which I have seen quite a few people claiming they have been sent to after clicking on a survey link… 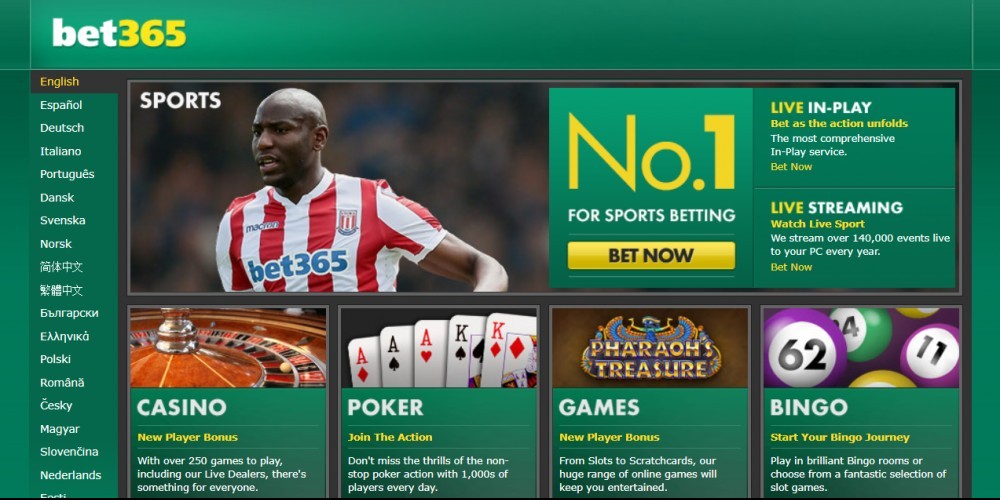 But why would Smart Dollars Club be sending a bunch of people to other websites? What is the purpose of this? Well… I’ll go over this below.

Based on what I know from reviewing hundreds of scams and from what I have seen with related survey opportunities that have turned out to be scams, such as Survey Voices, my guess is that there are two different things that are going on here… Two reasons why this website is around and why they are tricking people into entering their email to complete these surveys that don’t exist…

1 – They Are Selling Personal Data

The creator of this website is probably making money by selling personal data, in this case email addresses since that is the only information you enter. What would the point of this be?

Believe it or not you can make a lot of money selling email addresses. Email marketing is a big business and there are lots of people out there willing to pay money for lists of email addresses they can market to.

So the person behind this website is probably collecting large lists of email addresses and then selling them.

This means that if you did enter your email address to join you will likely start receiving a lot of spam emails with promotions that you are not interested in. This is because your email address was sold and now there are a bunch of online marketers trying to sell you their stuff.

Luckily for me I used an email address that I normally use for probable scams like this that I don’t really care about. So it doesn’t matter if I end up getting a bunch of spam in my inbox.

2 – They Are Earning Commissions via Referrals

The creator of Smart Dollars Club is likely also making money by referring people to all these different websites.

Take Bet365 for example, which I know this place is referring people to. Bet365 has a referral program that I looked into which pays 30% commissions on your referral’s winnings. So when someone actually goes to this website and joins, the creator of Smart Dollars Club will get commissions on their winnings.

There is no doubt that Smart Dollars Club is a scam. They lure people in with the hopes of being able to make up to $150 per survey but no such opportunity exists to make this much per survey.

Anyone who submits their email to Smart Dollars Club in hopes of being able to get a high paying survey is just going to be directed to some website that they have no interest in or to some paid surveys that don’t pay anywhere even close to $150.

If you are looking for a reputable paid survey website that actually does pay, one of the better recommendations I would suggest is FusionCash. They have been around for a while, having A+ rating from the Better Business Bureau, and what is nice is that they offer a five dollars sign-up bonus just for signing up.

What you should know, however, is that any paid survey website out there is going to be low-paying. The reality is that in modern times with the Internet at everyone’s disposal, market research companies no longer have to pay much to get people’s opinions. There is just no need for them to pay much per survey and that is why you can only expect to earn anywhere from $0.25 to $2 per survey generally.

If you are looking for an online income opportunity that has a lot more potential, I would suggest taking a look at  this program. I joined back in 2015 when I first started looking for ways to make money online and to make a long story short, I now make a living working online for myself. This just goes to show that the program does work.

But anyways… If you are interested in learning more you can click the button below. I’m not going to get into it all here…

Questions or comments? Please leave them below and I’ll get back to you as soon as I can 🙂 Also, what do you think about this Smart Dollars Club website? Do you have your own experience with it or a different opinion than mine? Please leave your own review below. I’m sure it will help other readers out.