Is The AZ Code a Scam? – It Certainly Is…

Is The AZ Code a scam? Short answer: YES… its a scam without a doubt. Upon coming across the sales video for this system I knew it was a scam from the start. I have seen this kind of thing a thousand times before during my time working online and looking into “make money online” programs. I’m guessing since you are reading my review right now you were suspicious that it was just another scam as well.

In this review I’ll be going over why its a scam and exposing some of the many lies that they throw in your face.

The first thing I took notice to was that above the sales video it said that I can make up to $3,000 in commissions today from Amazon. $3,000 in a single day from Amazon…. Starting today!!??? Are you kidding me? How the heck is this possible? I knew this was impossible but it definitely grabbed my attention and sucked me in. I wanted to find out what load of BS this guy was going to tell me about how this system would be able to generate profits like this.

In the presentation video he (a guy supposedly named Andrew Peterson) then went on to talk about how people are making $10,000+ per week with this system, such as “Elanor Reeves of Oregon made $9,722”. And of course all of these people are making tons of money each day with minimal work all using this single secret website.

He also makes the bold claim that anyone can use this system to make $500,000 per year and that you can earn so much money that you never have to work again. 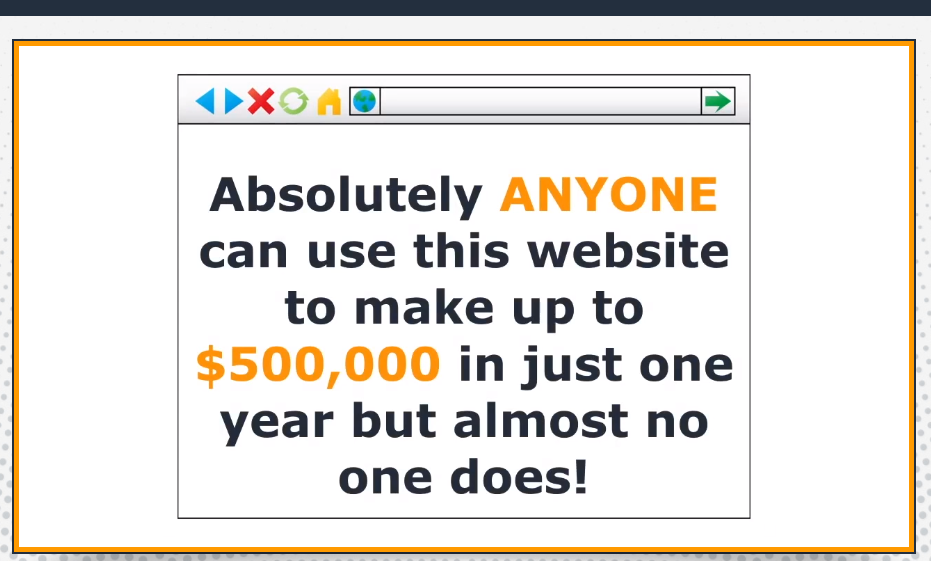 But is this all really true? OFF COURSE NOT. But you have to be careful here. They even show fake testimonial videos from people claiming that they are making tons of money with this. This is the first of the lies that I want to go over…

As an example take a look at this guy below. You should remember him from the video presentation if you watched the whole thing. He claims to have made over $300,000 in 7 months with this system. But unfortunately this is not true at all. What he should be saying is that the scammers behind this program are paying him to say that he made over $300,000 in 7 months with this system.

When I come across obvious scam systems like this I always look into their testimonial videos to see if they check out or not. Its common to find that the people in these videos are paid actors that you can hire on the Fiverr.com website, such as how this guy is… 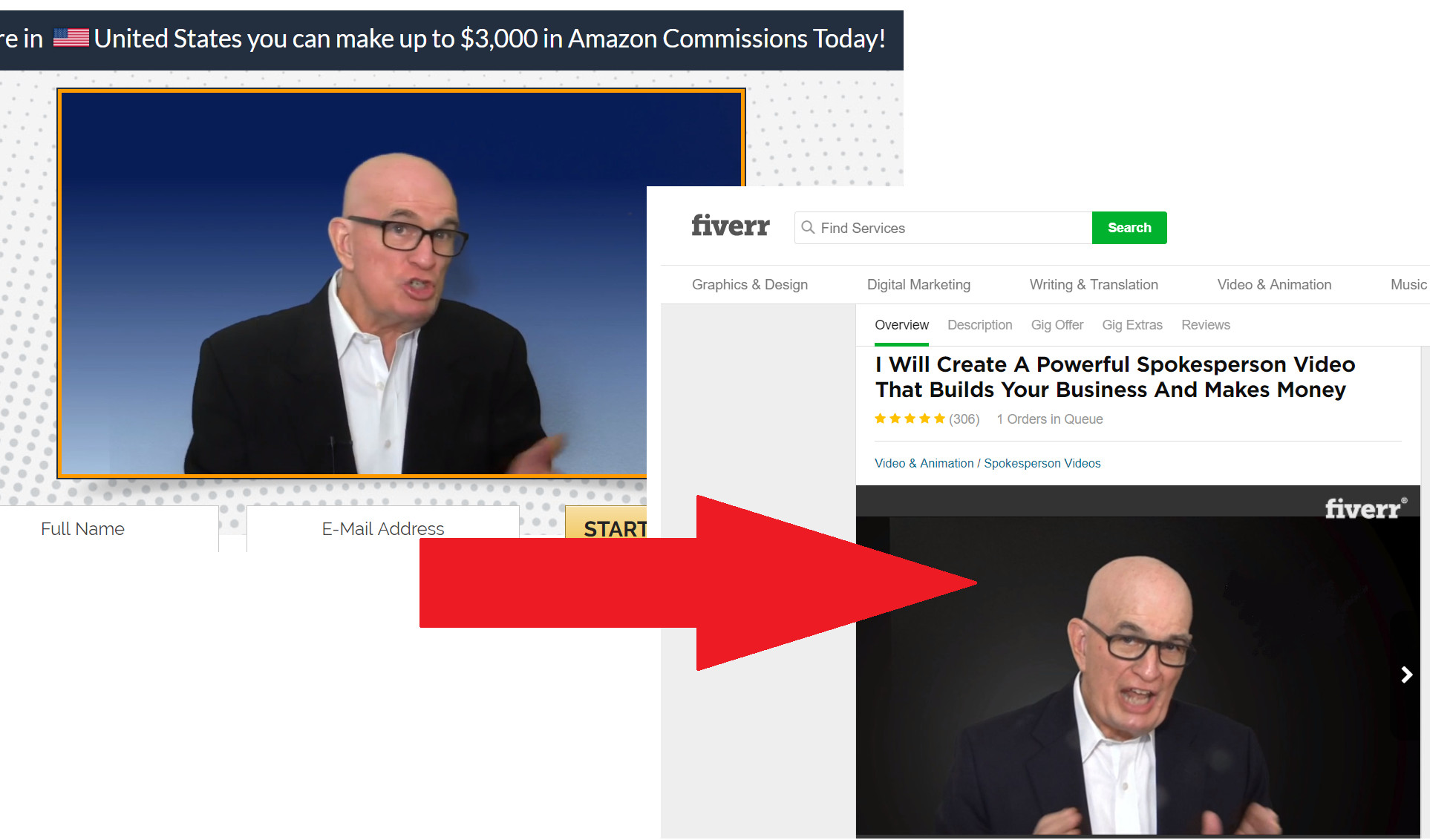 Does Andrew Peterson Even Exist?

The guy tells you his name is Andrew Peterson and that he is from Wisconsin but is this really true? He doesn’t give you any information about himself that you are able to look into and verify in any way, nor does he even show a picture of what he looks like. So pretty much you are just supposed to trust that he is who he says he is even though he just showed a bunch of fake testimonial videos where he paid actors to lie about using the system.

I have no proof that this particular “Andrew Peterson” guy doesn’t exist but I’m guessing that he is made up. Why? Because I have looked into and reviewed plenty of scams with fake creators that were completely fabricated all for the purpose of promoting some scam system…Money Sucking Websites, Free Biz Account, The Computer Geeks and many others do this kind of crap. This kind of thing is very common with scams because of course the real creators don’t want to tell you their name. If they would then you would be able to come after them after being scammed.

Throughout the sales video there are income statements that keep popping up below the video with claims that people just made commissions on Amazon. Take this for example which says that “Darleen just made a $322 commission on Amazon”… 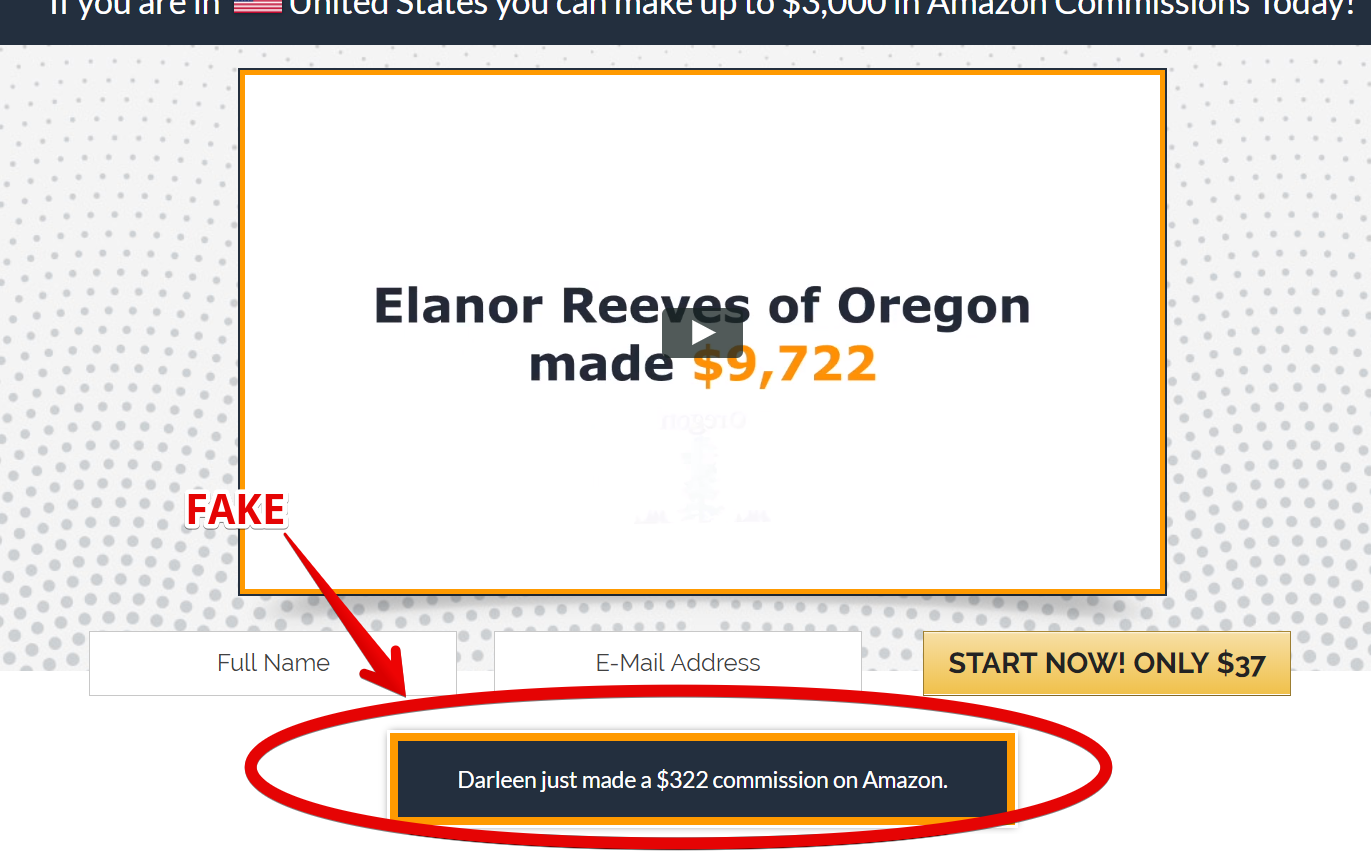 These are completely made up. It doesn’t make any sense how they would know what commissions are being made on Amazon from members of this The AZ Code system. I am a member of Amazon’s affiliate program and I’m the only one who knows how much I make. The information is private so this just makes no sense and I have seen lies like this plenty of times before with scams.

I don’t have to buy the system to know that it can’t work. They tell you that you can make $3,000 today with Amazon. This is an absolutely ludicrous statement to make.

What they are talking about is called affiliate marketing… which is when you promote products for companies (such as Amazon) and earn commissions when you help make sales. This is actually how I make a living and is a legitimate business model but to say that you can earn $3,000 the first day is crazy. I’ve been doing this since 2015 and I can tell you from experience that no one is able to do this when they just start out. To even make $1 within your first day would be a success when it comes to affiliate marketing.

Conclusion on The AZ Code – Scam

Did I try this system? No… so I guess I can’t say that its a scam with 100% certainty but I can say it with 99% certainty. Maybe you can make some money with this system but am I going to gamble and buy into it after seeing all the lies and misleading information they try to sucker people in with? Absolutely not.

This is your typical get rich quick scam that lures people in with the hopes of making super easy money online… and lots of it. As a role of thumb you should proceed with caution if something sounds too good to be true, which you did in this situation because you ended up doing a little extra research and coming across my review here.

If you want to learn how to start affiliate marketing the right way, which as I say is when you promote products for companies like Amazon and many others and earn commissions doing so then I would suggest Wealthy Affiliate. Wealthy Affiliate is the training program that I got started with back in 2015 and I’m still a member to this day… and I make a living doing this stuff now which goes to show that the program works.

You can read my Wealthy Affiliate review here for more info.