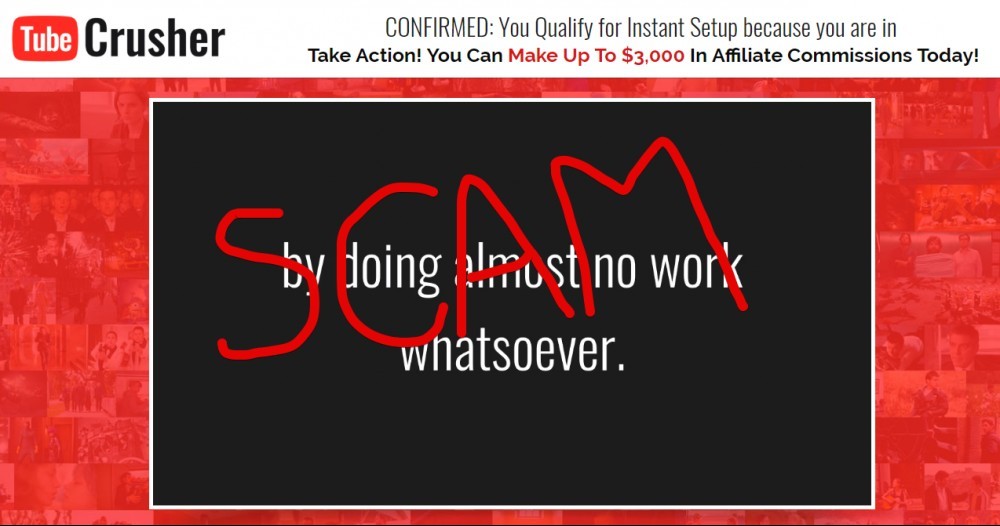 Tube Crusher it is said to be some amazing new system that anyone can use to easily make $2000 or more per day online. However… It is not like we all haven’t heard claims like this before for programs that have turned out to be complete scams. So is this the real deal or is Tube Crusher a scam like the rest of them?

If you are thinking about buying into Tube Crusher you are seriously going to want to reconsider. In short… Yes this is a scam. No one is going to be making anywhere close to $2000 per day with this “system”, if anything at all. What you get when you buy in is not nearly as good as what is stated and there are many lies you are told in the video presentation.

In this review I will be exposing Tube Crusher for what it really is.

Upon landing on the Tube Crusher sales page you are greeted with a video presentation. It starts out talking about all these people who have made tons of money with the system, such as Randy Peterson who made $2048.22…

The spokesperson tells you that all of these people have made this money just the other day but the problem with all this is that there is no verifiable proof of any of it. Anyone could create a video like this and make up income claims. With no proof how can you believe what you see? The answer is you can’t.

He also claims to have beta tested the system with six people, all of which made over $2000 per day starting from day one, after only about 15 minutes of setup time. But again… This is all unverifiable and could be completely made up, which it likely is. 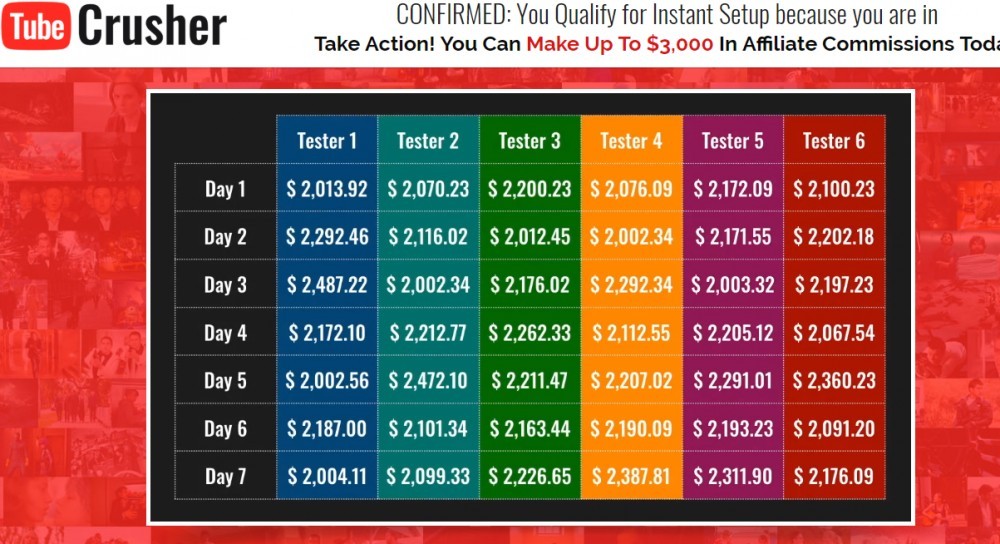 How Will you make all this money with this system to be able to do all this stuff? Well… It is all about using YouTube. What you do is create a YouTube channel and supposedly the system is going to do much of it for you and get you up and running within 15 minutes.

The guy who created the system is named Ciaran. He claims to be a YouTube celebrity and says that you would know him if he would tell you is online alias, but of course he isn’t going to do this. He wants to remain anonymous and is selling the system because he just wants to help other people out. He says that the money and fame don’t mean that much to him anymore… Now it is all just about helping people out.

In this case this saying fits perfectly. This seems too good to be true and it is, making it a scam. Before I get into what you are actually getting when you buy into this, I want to go over a few red flags that caught my eye when I was reviewing this “system”. These are all common scam signs that I often see you with other scams as well. So knowing these will help you avoid future scams as well, hopefully.

$2000 per day is a heck of a lot of money. I understand that there are YouTubers, like PewDiePie, you make millions upon millions per year, but being able to make $2000 in the first day is ridiculous. The successful YouTubers out there who make a living off of their channels have been at it for a while. They don’t just start and then all of a sudden start profiting thousands of dollars per day.

And of course this only takes a few minutes of work each day to keep running.

So you can make tons of money with little to no work? Sounds like a typical get-rich-quick scheme to me.

#2 – No Information On This Guy

Of course this “Ciaran” guy gives us no information about him that we can use to verify what he says. For all I know this guy is completely made up and doesn’t even exist.

This may sound like a little far-fetched claim, but is actually quite common when it comes to scams like this. Of course scammers don’t want their real names out there, so what they do is make up fictitious characters to promote the scam under.

Some other scams that I’ve reviewed recently that do this include Instant Payday Tricks and 30 Day Success Club.

#3 – No Information On How TubeCrusher Works

And of course there is also no information on how the system actually works. You’re just supposed to trust that the system somehow gets your YouTube channel up and running within 15 minutes and gives you the ability to profit $2000 within the first day.

But why should you trust this? There is absolutely no reason anyone should believe this.

This is also a very common characteristic of a scam. Instead of telling you what you need to know before hand, they require you to purchase the system in order to learn more. Because of course if you know what is inside you are not going to want to purchase it in the first place.

In the video presentation there are several different testimonials from people who claim to have been using this system and making tons of money with it. The will and below claims that it was “super easy” and took less than 15 minutes to set up. After that the prophets started coming in automatically.

Unfortunately… This testimonial along with the others are completely fake. These are paid actors/actresses that are just saying what they have gone paid to say. Below you can see a screenshot I took from the video presentation along with this woman’s profile on Fiverr, which is where the scammers hired her for this video…

And like I said, the same goes for the other video testimonials. This guy is also a paid actor on Fiverr who is just saying what he got paid to say…

The last red flag that I will go over is the price, which is only $37.

Think about that for a second… Why would this guy only be selling this system for $37? If it really does give people the ability to easily make over $2000 per day than he should be able to sell it for tens of thousands of dollars.

The truth is that just about every scam out there tells you this and that the real reason it is only $37 is because the product sucks.

What You Are Actually Getting

They call this a “system”, but is really not a system at all. When you buy in you just get access to information about starting your own YouTube channel that you could potentially profit from in the future.

There are no “secrets” given out that will give you the ability to profit instantly as they lead you to believe.

All in all, this product is horrible and it definitely not worth the money. It certainly isn’t going to perform like they tell you.

Tube Crusher is a pretty obvious scam. This scam lures people in by telling them about all the large sums of money they can make very easily in short periods of time, when this is far from the reality. Anyone who buys into this is going to be seriously disappointed, I can guarantee that.

But….. You are more than welcome to purchase this product if you want to. After all, it is your money.

Now if you did already buy into this scam and one your money back, luckily you might be able to get it back. This product is sold on ClickBank, which is a fairly trustworthy digital marketplace that you should be able to complain to in order to get that money back.

I’m not going to get into it all here, but you can click the button below to learn more…