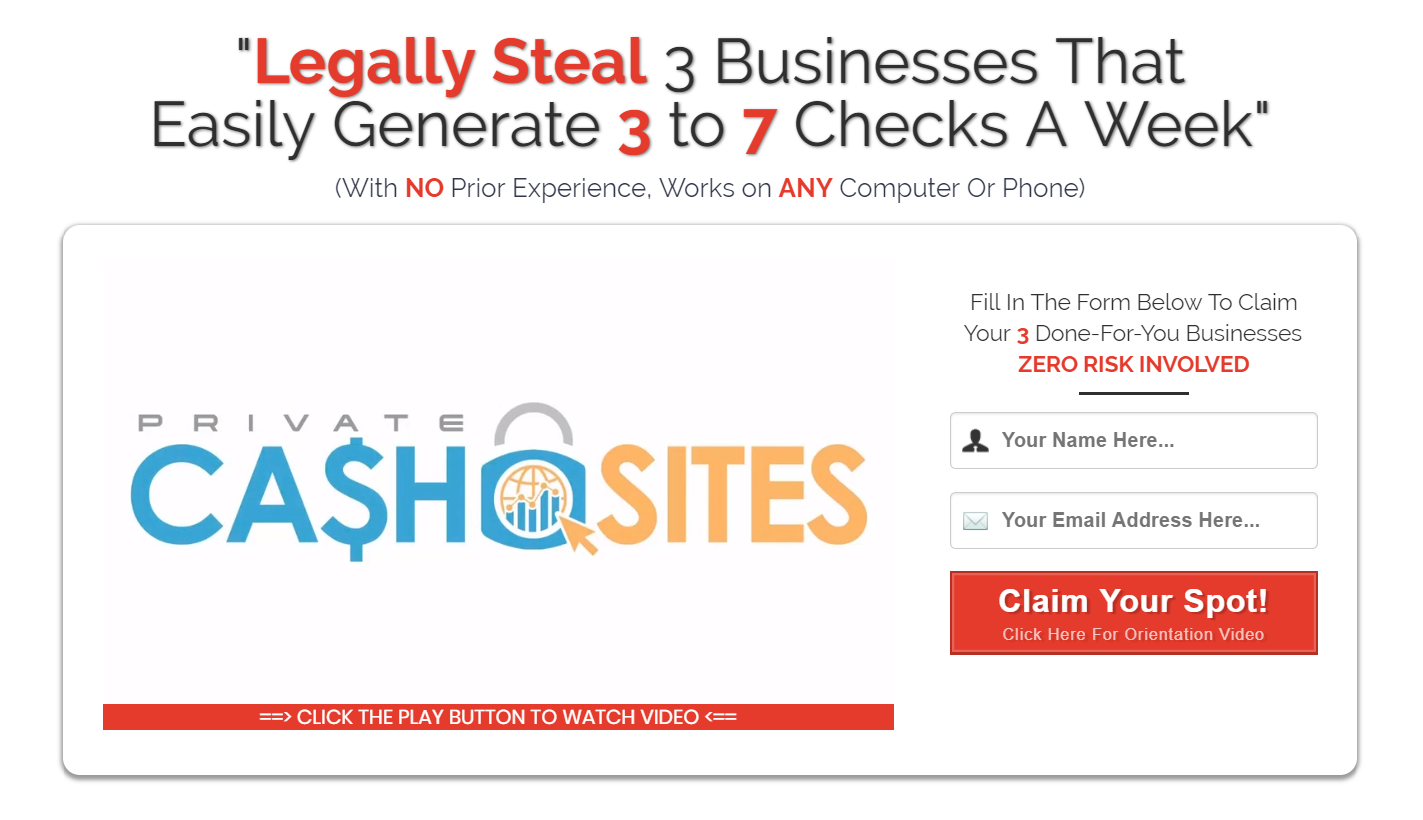 Private Cash Sites is supposedly some incredible new system for making money online that requires no experience and is super easy… But is it really? It is not like this is the first time I have heard similar statements like this, and often times they turn out to be scams. So is this the real deal or is it just another waste of time scam that is going to leave you with less money than when you started?

I'll tell you one thing for sure… Some of the statements made sure as heck made me suspicious of what is going on here. It just all sounds a little bit too good to be true… No experience needed, you can even do this on your phone, and then of course a lot of the focus is on how you will be able to quit your job to enjoy the finer things in life, such as traveling the world and going on vacations.

As the old saying goes… If it sounds too good to be true then it probably is. I'm guessing you're probably thinking the same right about now, which is the reason you are here reading my review in the first place. And it's a good thing you are because this has all the makings of a scam and is something I definitely do not recommend getting involved with.

You probably were led to the Private Cash Sites website after getting some email about some awesome new program that you can make tons of easy money with. But that doesn't matter, there are probably lots of different promotional techniques being used to lure people into this program.

When you get to the website, you are greeted with a promo video that starts out showing a bunch of commissions people were supposedly earning from this system… People making hundreds and even thousands of dollars a day.

The spokesperson in the video is a woman named Felicity, who I'll talk more about in a bit. She never comes out and says that she is the creator of this program, but she is the only name that we know… No other names being mentioned. So I can only assume that she is the one that came up with this whole thing.

Besides the system just sounding way too good to be true, because anytime I hear of a possibility to make hundreds or even thousands of dollars a day with very little work, I get suspicious… There are also a lot of little characteristics of this that point to it being a scam.

For example... She tells you that this system is only letting in a set amount of new people and will be taken down shortly… 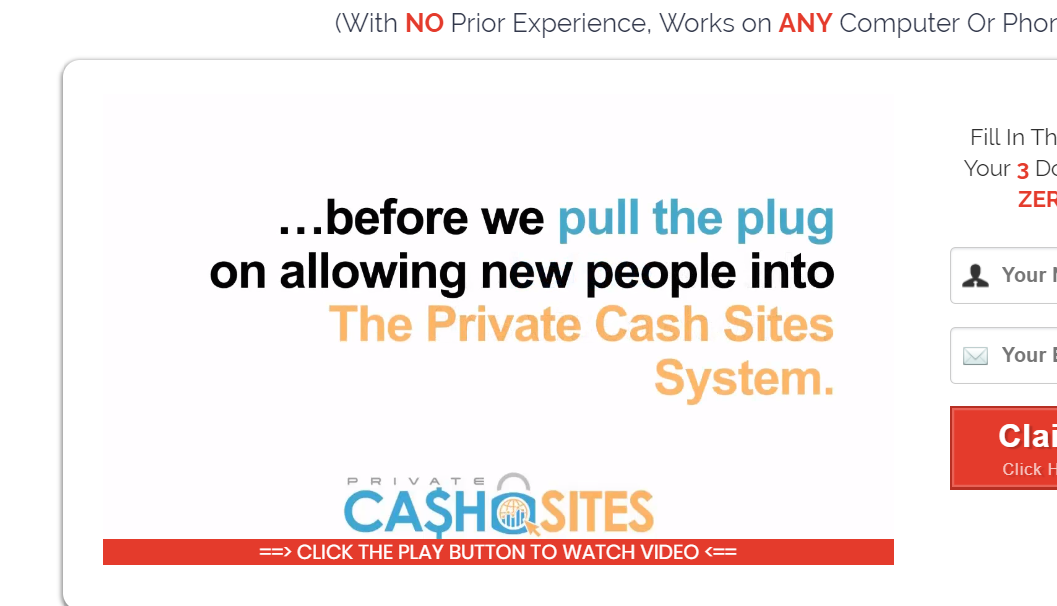 Now I don't know how true this is, but I can tell you that just about every scam out there is going to say the same thing. This just presents a sense of urgency to get as many people to buy in as fast as possible.

Lets discuss what you are told.

You are told that it is all about affiliate marketing, that it only takes a couple of hours to get set up, that is a "turn key business", that is a step-by-step method that anyone can follow, and that you will instantly become an expert affiliate marketer.

A turn key business that can turn you into an expert in a couple of hours?

But how does the system really work? She tells us in the video that it has nothing to do with writing articles, blogs, etc. and you will not have to send out emails or anything like that. So then what will you be doing?

Unfortunately there is absolutely no information given out on what exactly you will will be doing with this system. Everything is incredibly vague and basically you are just supposed to trust the fact that it is some incredible "turn key system" that is going to make you tons of easy money.

Felicity is the only name mentioned… Being the woman in the video presentation. But who is she? Is she the creator of this system? Is this she just a spokeswoman?

There is absolutely no information provided on her and not even a picture given. So how the heck am I supposed to trust her? The answer… I can't. For all I know this is a made up name and the person speaking is just some person getting paid to do a voiceover.

#2) Look what I found in the disclaimer!

When looking into suspicious systems like this be sure to always read the disclaimer, which is usually found at the bottom of the page.

As you can see here, in the disclaimer there is something mentioned called "explode of my payday". Why is this something worth talking about question mark well… Because Explode My Payday is a scam I have exposed in the past.

What is likely going on here is that Private Cash Sites it is just a re-hashed and recycled old scam… Basically a remake of Explode My Payday. I review scams all the time and see this sort of thing often.

#3) Little told about how the "system" actually works

proprietary system for making money through AM

As already mentioned, all of the information provided about how the system actually works is incredibly vague. Based on what we are told in the video presentations, we really don't know anything.

Of course you have to buy into the system in order to find out, which is a major red flag.

#4) Half of what she says doesn't add up

Another big red flag is that half of what she says doesn't even make sense. For example, she keeps mentioning how you will be able to quit your job and stop making other people rich… Yet the business model that this system is focused on, affiliate marketing, is literally about promoting other people's products, which makes them money.

The more I dig around and look into this program, the more it sounds like a scam. While I did not buy into this to find out what is really going on, this is definitely not something I'm going to be recommending to my readers, nor will I be buying into it at any time.

This seems to me like just another typical scam filled with misleading information, lies, trickery, and that is probably going to be some lousy training program that is just going to end up leading you down the wrong path and wasting a bunch of time on things that will not work out.

I wouldn't be surprised if the focus of the training is on getting you to promote Private Cash Sites two other people in order to make money, which is what a lot of these types of scams do.

But anyways… In this review I probably just confirmed the suspicions that you were already having… Which is that this place is a scam.

There our a heck of a lot of scams out there online, but if you want something legitimate that actually works, I would recommend taking a look at how I make money online.

Comments or questions? Leave them below and I'll get back to you soon now 🙂