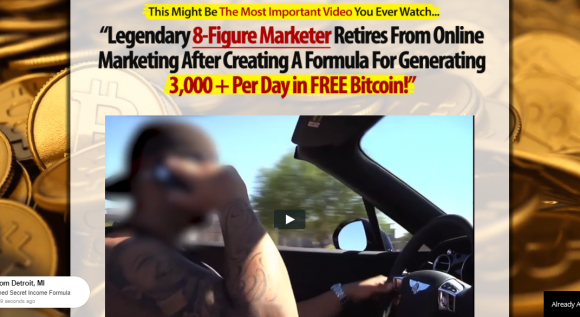 Secret Income Formula, Scam or Earn Easy Bitcoin? – What You Ought to Know

Secret Income Formula is one of Mack Mills’ (aka Mack Zidan) newest systems that he is promoting. It is very similar to many of the older systems he created to make money online except that this one is focused on Bitcoin. If you are wondering if this is actually legit or if Secret Income Formula is a scam then you are right where you need to be. I have done my research and will be going over what exactly this system is, how it works, the downsides to it and more.

I am not promoting this system and am not affiliated with it so this review is going to be unbiased and as real as I can make it. Enjoy…

If you watched the first promo video for Secret Income Formula then you are probably wondering who created this system. In the video they label the guy as “Mr. X”, but if you enter your information and make it to the second video you will find that this guy’s real name is Mack (he goes by Mack Mills and Mack Zidan).

Before I get into what this system is I want to touch upon who Mack is for a second because its important to know the person behind it all.

Mack is a veteran in the online marketing space. I have been involved with online marketing since 2015 and have come to know that Mack is one of the big players. In the video they claim he is a 6-7 figure per year earner and this is true. Every product or system that he promotes he does a great job at. You can probably tell by how professional the website and video are for this Secret Income Formula system.

Some of his past systems that he put together include Digital Income Method and Daily Income Method. They are both very similar to this Secret Income Formula system except this new one is focused on Bitcoin, as I mentioned.

What is Secret Income Formula & How Does It Work

Secret Income Formula is basically a system that promotes several programs. Mack is giving away this system for free so you may be wondering what is the catch and how does he make money from the whole thing. And you better believe he is making a killing from it.

The way he makes money is by getting you to join and invest in 3 different opportunities: iCoinPro, MindSet 24 Global, and FutureMoney.

iCoinPro is a bitcoin mlm educational program somewhat similar to CryptoWorld Network. Basically what they do is provide educational digital products for people who are interested in learning more about bitcoin and cryptocurrencies. They teach you about investing, ico’s, trading, basic things and a bunch more. The training is sold in packages that can get pretty expensive.

The mlm (multi-level marketing) part of it is where you make all the money. You see you can refer people to iCoinPro and when they purchase one of the educational packages you get paid for it. You also get paid from the people that they refer in (level 2), and the people that they refer in (level 3) and so on. The way it is set up you can earn multiple ways from referring others to join. You can earn on as much as 14 levels beneath you. This pyramid-like structure has huge earning potential but there is a major downside to it that I’ll go over later.

As for the MindSet 24 Global and FutureMoney, its the same type of deal. Mack loves mlm’s and this has been what he is known to promote.

Secret Income Formula In a Nutshell

You make money in the same way that Mack makes money. When you sign up you get the exact same Secret Income Formula for free. You will get to send people to the sales page that plays the video with “Mr. X” and really gets everyone excited and hyped up.

So the name of the game is recruitment. You want to recruit (refer) other people into the system because that is how you make money. Once you refer them to Secret Income Formula the system does the rest. The system automatically refers them to join iCoinPro, etc.

The Downside That No On Is Telling You

What no one tells you about mlm systems like this is that they are much more difficult to be successful with then they appear. The reason no on tells you is because everyone is trying to recruit more people in so of course they aren’t going to be telling you the negatives.

As I discussed all the money made from Secret Income Formula comes from iCoinPro, MindSet 24 Global, and FutureMoney. The free Secret Income Formula refers people to these and when they buy in is when you get paid. But there is a fundamental problem with mlm’s like this. The problem is that very few people make money with them and this is due to the structure in which they are set up.

You see with mlm’s, you earn from people recruited in beneath you, in iCoinPro’s case you can earn down to 14 levels beneath you. This sounds awesome but isn’t quite that awesome. For people at the bottom money that they could be making is getting sucked away from them and is used to pay people off that are above them on the pyramid. This makes it harder for those near the bottom to earn because all the money is flowing to people above them.

So if you are good at recruiting and can recruit in people like crazy then this is something that has a lot of potential. But if you are not then you will likely not make it. Mlm’s are a tough business to make it in and most people fail because there are always many more people at the bottom of the pyramid than at the top.

People like Mack and other experienced online marketers will make a killing with this but most people will spend more money than they actually make. That is the reality of it especially with these particular mlm programs that are being promoted through this system.

Conclusion on Secret Income Formula – Good Opportunity or Not?

Secret Income Formula is by no means a scam like the many probable cryptocurrency scams out there (ex: Bitty Cash, The Crypto Genius, etc). Its a legit system that does work and can potentially make you a lot of money. I would say its a bit over-hyped without a doubt but nonetheless it can really work.

That said, I’m not going to tell you whether or not to put your time, money, and effort into this. What I will say though is that I am not going to be getting involved because I don’t care for mlm’s. They are too difficult for me to make money with so I stay away from them. I also don’t find their recruitment oriented business models to be very ethical at times.

What I will recommend is this program that I got started with back in 2015 when I first started online marketing. I currently make a living online and have owe it all to it. You can check out my review of the program I’m talking about Here.

Also, if you have any questions, comments or concerns just leave them below and I’ll get back to you soon 🙂