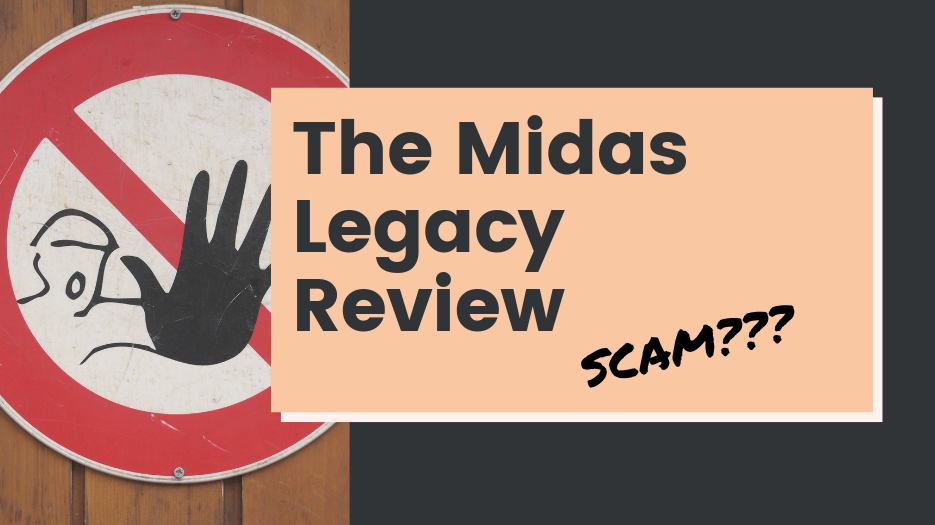 When I first came across The Midas Legacy it seemed like it was going to be a scam for sure. I’ve reviewed hundreds of scams online and this fit the description pretty good at first glance. However, after looking into it further things got more confusing for me. First it seemed like a scam, then it didn’t really, but overall it is definitely not something I’d recommend buying into.

In this review I’ll be guiding you through the mess of confusion that they throw at us so that you can see what The Midas Legacy really is.

There are probably many different funnels to get people to buy into this whole thing, but sucking people in via email seems to be at the top of the list. One email that has been going around says that you can “add over $800 to your [bank] account in the next 7 minutes”— which sounds awesome and all but it also sounds like a big fat scam.

The story, as “Jim Samson” claims, is that they have uncovered these secret “bank codes” that are what is going to be able to make you $800 in the next 7 mintues–and apparently all you have to do is put these codes into your computer and that is about it… then you make money.

The guy talks about how the greedy elitists and banks rip off all of us normal folk and that this new money making secret that he has uncovered is a way to get back–to stick it to the man.

He calls this system for making money that he has discovered a “legal loophole” and even a “money machine”.

And of course he acts like you are super lucky to have gotten the invitation to be a part of this all. Apparently there are limited offers for people to get in on this and it is very secretive… well, that is what he tells us anyhow. But the truth is that this is not secreative at all and he is blasting emails out to probably thousands of people to get in on his system–so that he can make money off of us all.

*Note: This is just one of the sales pitches that I came across. There might be others suckering people in from totally different angles.

But anyways… enough about the sales pitch. It obviously sounds like a scam when you first come across it, but of course you can’t always judge a book by its cover–which is why I decided to dig a little deeper and see what this Midas Legacy is all about.

When you actually go to the main site for The Midas Legacy (themidaslegacy.com) you might actually be surprised. Why? Well, because the website isn’t riddled with the scammy claims and of being able to earn tons of easy money or anything like that.

The company behind it all is called TML Group, LLC and they are listed as having their physical office at 1220 Winter Garden Vineland Rd. Suite 108 Winter Garden FL 34787 USA.

Money Mentor – This is a financial newsletter that you can sign up to receive every month. Members are provided with stock recommendations, reports, alerts and training.

Stock Code Breaker – This is a 10 part monthly course that teaches people how to trade stocks. Members learn how to trade profitably no matter what the market is looking like (bull or bear). In the description we are told that “each stock price pattern has a kind of code in it, and this will give you the key to unlock it”. (sounds a bit familiar!)

Stock Raider – This is another 10 part monthly course that supposedly exposes the “dark side” of Wall Street. Members learn how they can “turn the tables” using strategies that lead to profit as the end result. This course starts off assuming that members don’t know a thing about trading stocks, so it is said to be a good place to start out.

Who Is Jim Samson? Does This Guy Even Exist?

On the website Jim Samson is stated as being a bestselling author, as having been quoted in the International Business Times, as having called the financial bubble in 2006 and more…

But who is he really?

Well, there is very limited information on the guy and to be honest I was starting to think he might be a fictitious character made up just to promote this opportunity–as I’ve seen plenty of times before with other online scams–and all the other articles online saying that this is a scam and that this guy might not exist certainly didn’t help.

HOWEVER, I came across a Youtube video where he actually makes an appearance. So he does appear to be real–can’t really argue against this anymore…

Looks More Legit, But Some Things Still Don’t Quite Add Up

While things do look more legitimate, there are still some, red-flags that I see and things that just don’t make much sense to me–which still lead me to believe that this could be a scam.

For example, at the bottom of the website they say “as quoted in: International Business Times”, “As seen in: The New York Times” and so on, yet I have looked on these other websites and have found no mention of The Midas Legacy or Jim Samson.

So is this all made up?

Potentially I think, but I’m not completely sure. It’s not like I haven’t seen it 100 times before too. Online scams often claim to have been featured on the news and such because it adds credibility to their name–although it is a complete lie.

When you search around for complaints about The Midas Legacy you won’t find all that much that aren’t about the ridiculous sales pitch.

Most people are complaining about the incredibly deceptive marketing tactics being used to promote their products/services. You are led to believe that you are going to be able to make some guaranteed money pretty much instantly when the reality is much different–and not nearly as great–which just leads to disappointment.

There are a few complaints with the BBB about this, such as this…

Why can’t they just market their products/services in an honest and straighforward way? I don’t know, but this reminds me a lot of the “freedom checks” and “congressional checks” opportunities that I exposed in the past as being very misleading investment opportunities.

There are also some complaints from people claiming that they have been overcharged or charged money when they didn’t know they would be, but these are few and don’t seem to be anything to worry about.

While there are a lot of red-flags in the marketing material that is out there for The Midas Legacy, such as for “the midas legacy bank codes” and such–and while the information given is often very misleading and lures people to buy into their products/services without really knowing what they are getting into, it is hard to say whether or not this should be called a scam.

They do seem to be a legitimate company that provides a legitimate service. The problem is mostly coming from the marketing material and how they lure people in.

There are still a lot of unknowns when it comes to this company and the products/service that they offer. Much of what they say in their marketing material seems to be untrue or at least misleading to some extent, which is the reason I was suspicious that this might be a scam in the first place.

All in all I haven’t come to a solid conclusion on this place due to the lack of information, lack of transparency, etc. And because of this I am not going to be recommending it to my readers.

But you can do as you wish. That said, if you are looking to make money investing there are certainly better and more honest, straightforward and legitimate services out there than this.

So anyways–I hope you enjoyed this review and found it helpful. If you are looking to make money online be sure to check out how I make a living working for myself–or alternatively you can check out my top picks for making money from home.