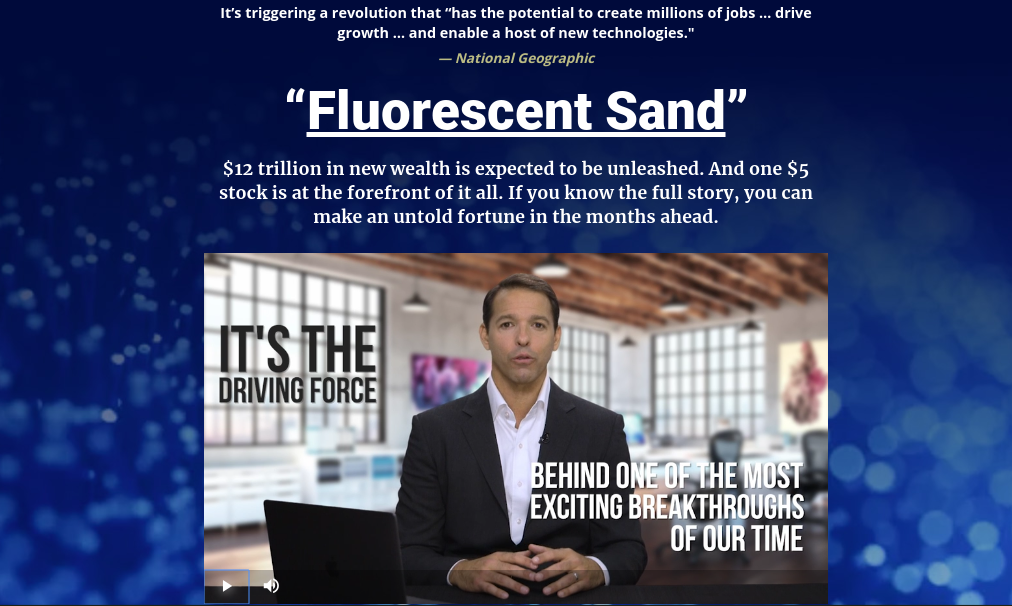 Is “Fluorescent Sand” a Scam or Amazing Investment Opportunity? [Review]

The whole “Fluorescent Sand” teaser by Ian King is a bit over-the-top and get’s down-right confusing. If you watched the video presentation or read the written version, you probably have quite a few questions.

Is “Fluorescent Sand” a scam investment opportunity? Is this the incredible bargain that he claims it to be? What $5 company is he talking about that we can invest in for double, triple, and even quadruple digit gains??

In this short review I’ll be telling you what you need, and want, to know. I won’t be beating around the bush–I’ll be going over what the heck this investment opportunity is, why it’s probably not quite as good as Ian King tells us, the cost of what he’s trying to sell us and more.

First let’s talk a bit more about the sales pitch and what we are told..

According to Mr King, “Fluorescent Sand” is the driving force behind one of the biggest breakthroughs of our time.

He claims that Scientific American says “it’s about to change your life” and MIT Technology Review has been quoted as saying “it’s going to blow you away”–and even the past White House Advisor on science and technology, Susan Crawford, said that it is as “central to the next phase of human existence as electricity was a hundred years ago”.

But as I will go over–these people aren’t actually talking about “Fluorescent Sand”. This is just a term that Ian King made-up to lure people in and make this opportunity sound more unusual and unheard of.

It’s all about 5G and we are told that the 5G revolution is being made possible thanks to this sand–which “looks and feels exactly like sand on a beach”.

Stephen Mollenkopf, the CEO of Qualcomm, estimates that up to $12 trillion in revenue will be brought in from this development.

And most important of all–there is a company at the forefront of this revolution that can be bought at $5 a share, which is your chance to strike it rich–which he claims is the best opportunity in the stock market right now.

What Is Fluorescent Sand?

He talks about how Sir Charles Kao, a physicist, found out how to transform sand into pure glass–and how it can be made into long skinny strands that can transmit lasers carrying data.

After far too much time, he finally get’s to the point and tells us that he is talking about fiber optics here.

But what’s so special about fiber optics right now? I mean, this technology has been around since the 1950’s and has been used in the US for decades.

Well… the truth is that, while it has been being used, much of it’s potential is still on the table. Right now the US has been “quietly” building a network of fiber optic cables across all 50 states. Only a very small portion of these cables are actually in use and the unused strands are being bought by large companies such as Microsoft, Verizon and Amazon.

They are buying these unused fiber optic cables in anticipation of the 5G rollout, which is going to be coming soon.

The Company He Wants Us To Invest In

As you already know, there is this one “$5 company” that is going to be critical to bringing the 5G fiber optics revolution to life–or at least this is what we are told.

He hints that “this firm makes the device that links you to the fiber optics and to the wireless 5G networks”–and this device is the size of a thermostat that can be placed anywhere in your home.

So what the heck is this device that he is hinting at and what company are we talking about investing in here–to possibly make quadruple digit gains???

According to StockGumshoe, the company that is being teased here is likely Inseego, which is an equipment maker that manufactures hotspots–the things that will be tapping into the 5G network and turning those signals into household WIFI. Inseego matches up with all the little hints that Mr King gives us, and is close to the $5/share range.

But as far as why this particular company is the “best bargain” out there and is going to suck up much of the $12 trillion in revenue that is predicted to come from this 5G rollout–well, who knows..

The truth is that the whole “fluorescent sand” shenanigans is a far-fetched sales pitch to lure people in so that Mr Ian King can “give us” a copy of his new book ‘The $5 Stock Leading the 5G Revolution”.

No… But really… The real point here is to get people to subscribe to his new financial newsletter service called Automatic Fortunes. You can get a copy of his new book for “free”, but you have to pay to subscribe to his members subscription service first. 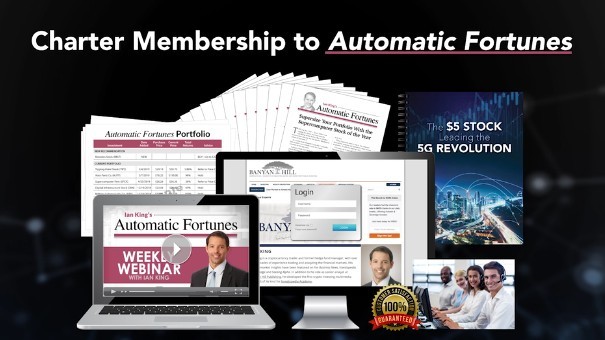 What you get when you subscribe to this subscription service includes…

Obviously the sales tactics being used here are a little sneaky. I mean, we watched that ridiculously long video presentation about “fluourescent sand” to strike it rich with some incredible opportunity… but of course we have to pay to find out what this opportunity is (well, you normally would have to, but I just told you what the opportunity probably is).

Who Is Ian King?

After all the hoopla and mumbo jumbo being thrown at us, it’s completely normal to wonder if this all might be one big scam–and wonder if Ian King is really who he says he is.

Surprisingly he actually is. You might expect a smooth talking salesman (as he appears in the video presentation) to lie about himself and his credentials, but this guy is the real deal. It is true that he started out at Salomon Brothers, worked for Citigroup as an analyst and became head trader for a hedge fund–and he has been on Fox Business, writes on Investopedia, etc.

He knows what he is doing.

First off, they are not accredited with the BBB and have a fair number of complaints + low customer reviews. 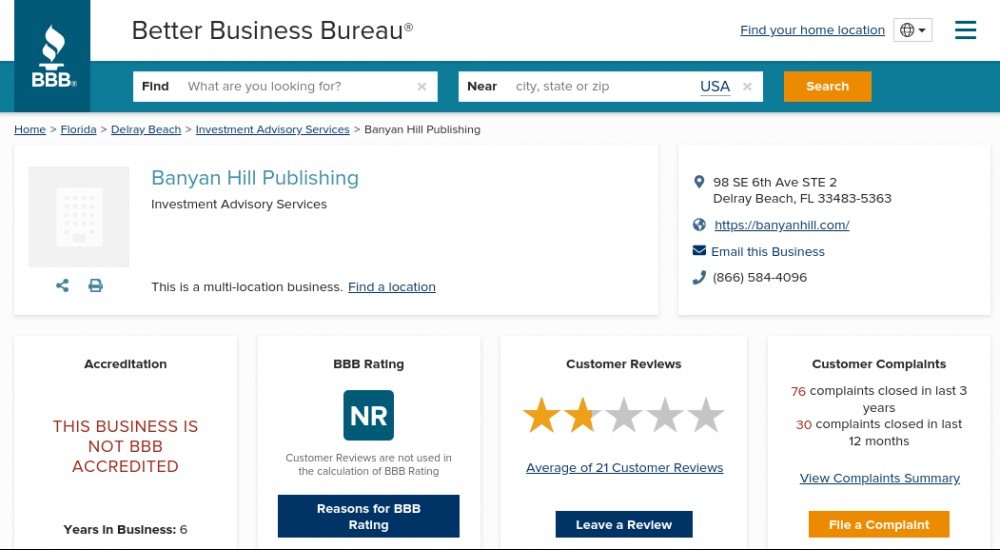 The fact that it is not BBB accredited doesn’t really matter much to me, but the high amounts of complaints about this company and their publications is a problem. 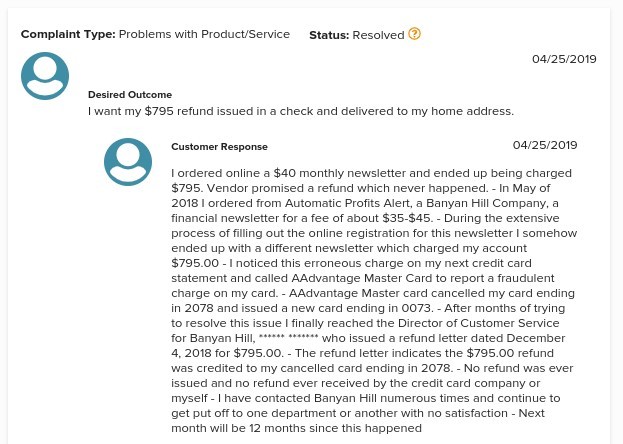 There are also quite a bit of complaints from people who are sick and tired of getting bombarded with promotional emails from this company. Apparently once you give them your email address for any reason, you will be having your inbox filled with promotions for their different newsletters. So you might want to use an email that isn’t your main email–you could always set up a another free gmail account for free.

A History of Misleading Sales Tactics

I first came across Banyan Hill after being lured into a promotion for what they called “Freedom Checks“. Basically what they were claiming in the sales pitch was that American citizens could add their name to some list and start collecting checks–which was incredibly misleading and deceptive.

The truth was that they were trying to get people to buy into a different newsletter subscription and the “freedom checks” were actually dividend checks that people could potentially collect if they would follow the investment advice of the newsletter service and invest in certain companies–NOT AT ALL WHAT YOU WOULD EXPECT.

There was another deceptive sales pitch for what they called “Kennedy Accounts” which was similar in a lot of ways. I also reviewed this opportunity and have received a plethora of positive comments from people thanking me for saving them from the ridiculous scammy marketing tactics going on here.

The cost of a membership depends on what subscription you purchase. They have 3 different subscriptions available…

With the Standard Subscription you only get access to the material digitally and with the other 2 more expensive subscriptions you get digital access as well as printouts mailed to you, along with some bonuses.

*Note: These subscriptions autorenew every year! So be careful.

So is this whole “fluorescent sand” thing a scam?

The truth also is that with this very misleading salespitch people such as you and I are being lured into subscribing to Ian King’s financial newsletter service–which costs money.

BUT… the truth ALSO is that this does provide value and Mr King does have the credentials to justify such a service–and you could make money from it.

So what do you think?

I’m not a fan of the marketing material behind this whole thing, but that is just the way Banyan Hill likes to do things, which is why they get a lot of people filing complaints with the BBB and writing very negative reviews all over the internet.

Okay, so let’s do a quick recap here because this is all pretty confusing.

I’m not going to be telling any of my readers what choice to make. If you want to subscribe to Ian King’s Automatic Fortunes newsletter than that is up to you. The point of this review was to cut through all the BS and help you see what you are really looking at here.

I hope you enjoyed this review and found it helpful. What do you think about this “Fluorescent Sand”? Feel free to leave any comments or questions below 🙂