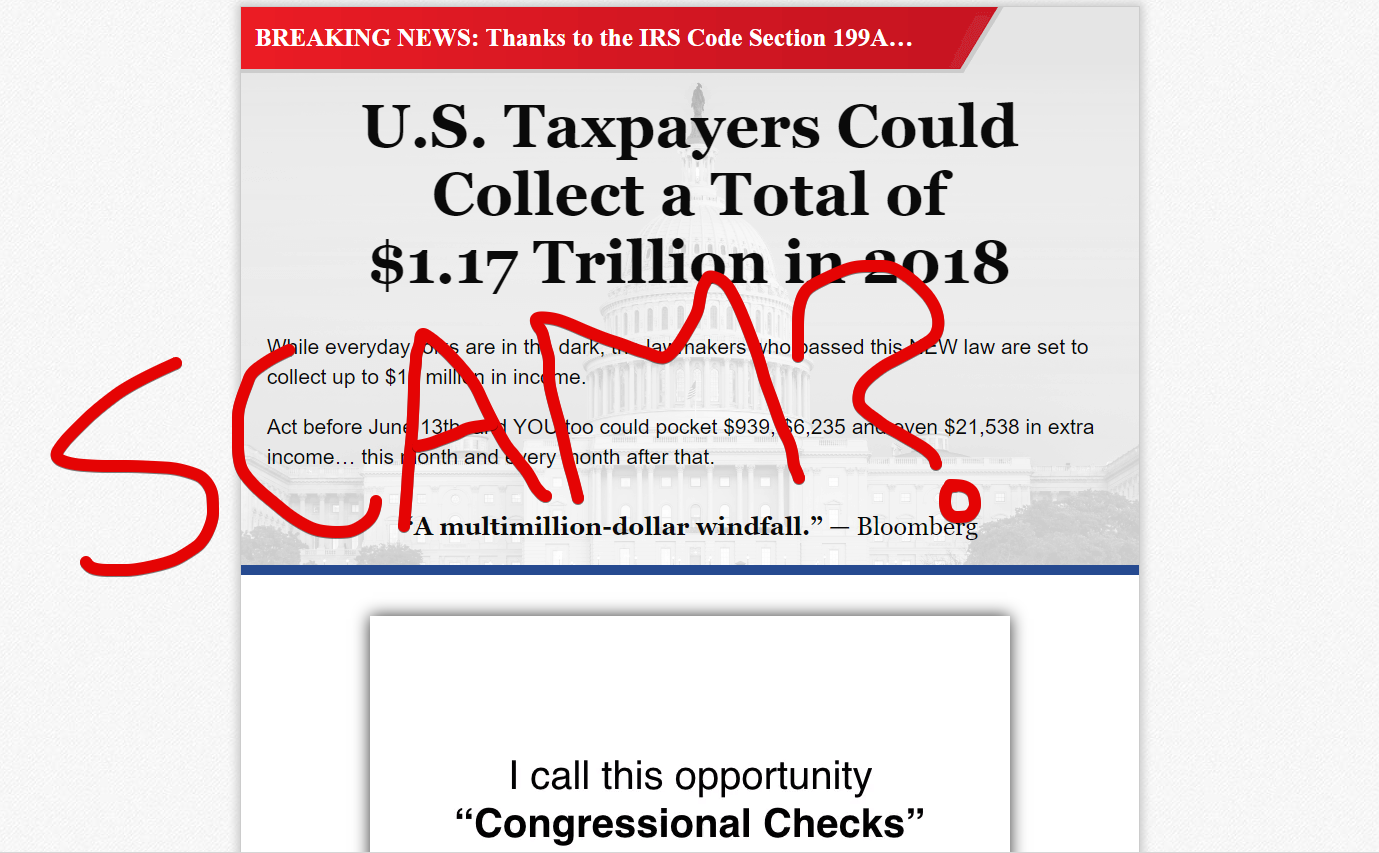 “Congressional Checks”, Scam by Zachary Scheidt? – A Review You Should Read First!

Zachary Scheidt claims that there is a new provision to the tax code that allows ordinary everyday Americans to collect “Congressional Checks” on a regular basis without doing any work. He lead you to believe that all you have to do is add your name to some list to begin collecting these checks. But can you really trust what he says? Or is this all just a bunch of misleading hype to sucker people in?

Unfortunately much of what he tells you is either a lie or very misleading. Throughout this review I will be going over the absolutely ridiculous video presentation that I came across for these Congressional Checks and all of the deceptive information given out.

I’m guessing that you are suspicious of the claims that Zachary makes. After all, you are reading my review of it right now for additional information. It’s a good thing you are because if you were to buy into this thinking that you are going to add your name to some list and start collecting these “Congressional Checks” then you would just be disappointed.

The Sales Pitch – Deceptive To Say The Least

So I came across this whole “Congressional Checks” thing after finding an ad on Yahoo that you can see below. Dad said that there was this new law that allows the benefit of collecting a monthly check from the US government. This ad was below the featured headline stories on the Yahoo homepage…

But anyways, it doesn’t really matter how you came across this “Congressional Checks” sales pitch. There are probably many different ads and marketing tactics used to sucker people in.

What Zachary tells you is that there was a last minute provision added to the tax plan that could put in extra $6235 or more in your pocket this month and every other month. This “last minute provision” is section 199A. How does this provision allow you to collect these checks? This is something that he never explains… Probably because it’s not true.

He tells you that congressmen are collecting millions in free checks from this provision but most Americans have no idea it even exists. He really tries to strike a nerve and get you fired up because of course no one likes politicians passing laws and making provisions in which they benefit more than the everyday American.

He goes on to show a bunch of screenshots of these “Congressional Checks” that people are supposedly collecting but the problem is that they are all fake. He should people, such as “Kevin L” acting checks for as much as $44,577 but this is all a lie… 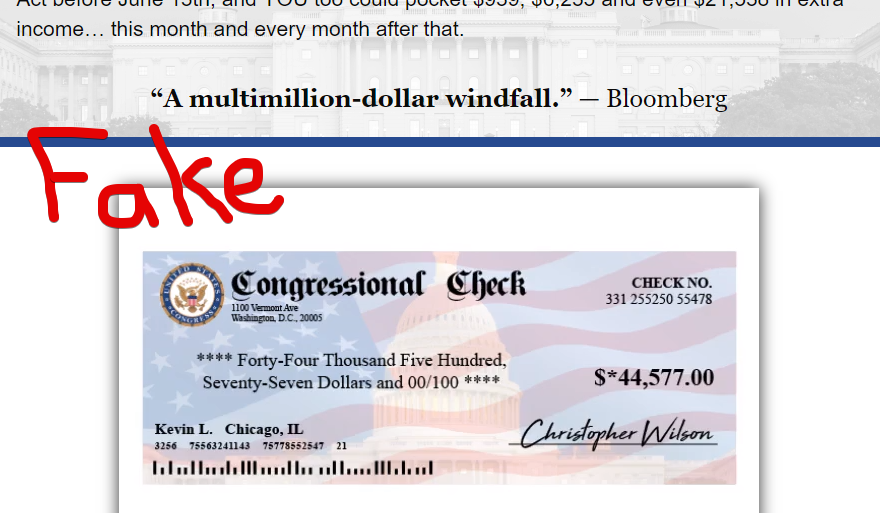 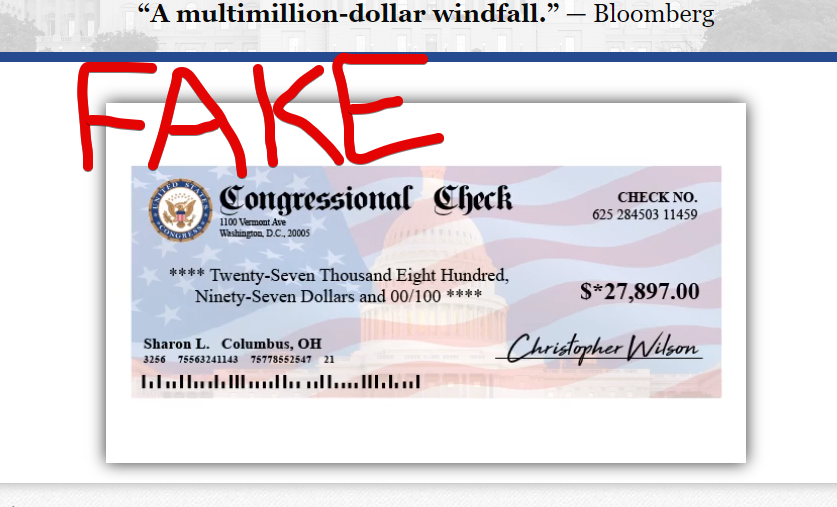 About half of the video presentation consists of him just showing these fake checks to make you think that this opportunity is much more incredible than it really is. Why do I say that all of these checks are fake? Well because as you will see there are no such thing as “Congressional Checks”.

Throughout the video presentation I also noticed that he kept saying that I had to act “before June 13”. The funny part is that you could tell the “June 13” part did not fit in the video. You tell it was pasted in there because Zack’s voice sounded different when he said that part. The reason for this is because this part of the video keeps getting updated. Whenever it reaches a June 13 the video will just be re-edited to say a later date. This is nothing more than false scarcity to try to get people to buy into this as soon as possible. 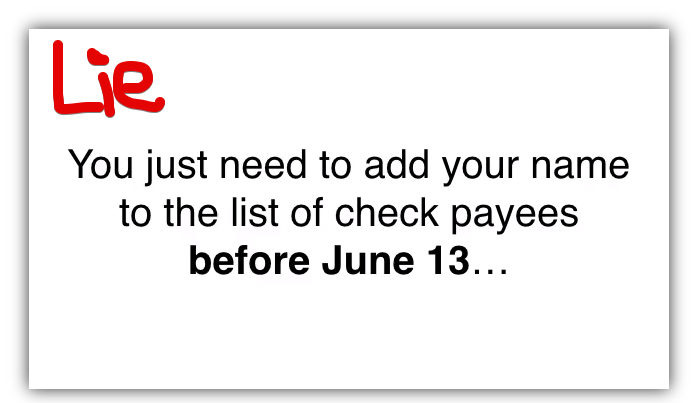 I would also like to point out that all of the quotes that are displayed in the video presentation, such as this one from “Harry F” are more than likely fake as well. There is no proof that the quotes are reeling anyone could have easily made them up, which is likely based on the other misinformation given during the presentation.

Are These “Congressional Checks” Given Out By The Government?

The marketing tactics used here are quite poor. The information given is very unorganized and seems to go against itself at some points.

For example, the ad that I clicked on Yahoo stated that these checks were being given out by the US government, but during the video presentation Zach tells you that this has nothing to do with Social Security or any government program. So this obviously makes no sense.

What The Heck Are “Congressional Checks”?

If you ended up sitting through the entire video presentation, which was like 40 minutes long, then you may have started to figure out what these “Congressional Checks” are that he is talking about. He never gives you a straight answer at all throughout the entire presentation but there are a few clues that you may have caught.

He tells you that there are “fiscally transparent entities” that are benefiting from this new tax provision and are required to make regular payments to their partners. He also says that “nothing is guaranteed” and that “all investing carries risk”.

“Congressional Checks” Do Not Exist

As I’ve been saying, these “Congressional Checks” do not exist. They are just a name that Zach made up as part of his luring sales pitch to sucker people in. The same goes for the BS “freedom checks” sales pitch that you may have heard.

The truth is that these checks he is talking about are really dividend payments that you are able to collect from investing in company stocks. Misleading isn’t it? The whole time you were led to believe that you could easily collect of these checks by adding your name to a list and now you find out that this whole thing is about investing in stocks and collecting dividends.

In Zach’s book he identifies some of these entities that you can invest in which will supposedly pay out the highest dividend, or what he calls “Congressional Checks”.

This book is given away for free and he told you that you will be shown exactly how to collect these checks. He tells you that this book will not be sold anywhere in that he wants to keep it a secret that only a small group of people know about. But of course this is just another pile of BS that he feeds you wish doesn’t make any sense because their advertising this opportunity everywhere. 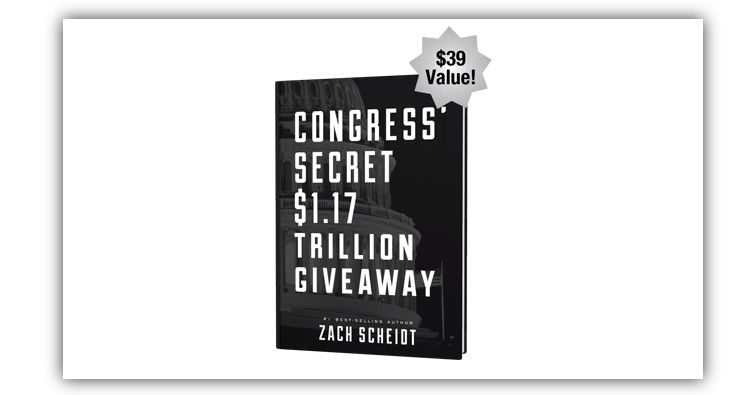 Why is he giving away this book for free and only requiring you to pay a processing fee? Well because this book is just used as a way to get people to sign up for “Lifetime Income Report”, which is an investment newsletter that Zachary Scheidt is the editor of. You will be signed up for a 30 day free trial of this newsletter and if you do not cancel before the trial is up you will be charged for an entire year, which is where they make all their money.

A Look at Lifetime Income Report

Lifetime Income Report is a subscription-based newsletter published by Agora Financial (which is well known for shady marketing tactics like this by the way). The subscription is purchased on a yearly basis and with that you will receive 12 copies of the newsletter, one every month. Each copy will provide investment advice and look into a new investment opportunity. As a subscriber you will also receive email alerts if there are any immediate actions that need to be taken for recommended investments.

I actually wrote a review of Lifetime Income Report already, and the newsletter itself doesn’t seem to be all that bad, the main problem seems to be from the ridiculous sales tactics used to get people to buy into it.

Is This All a Scam?

The truth is that there is value provided in Zach’s Free book and the Lifetime Income Report newsletter. Zach is very experienced and really was a hedge fund manager as he stated. So he definitely is someone that has the ability to provide good advice. However… People are lured into this opportunity in a very deceptive way. You are lured in thinking that you are going to be collecting these checks by signing up to some list and what is really going on here is you are getting signed up for his newsletter service, which has absolutely nothing to do with collecting checks in this manner.