Is Survey Monster Legitimate? – It’s Not What You Think! 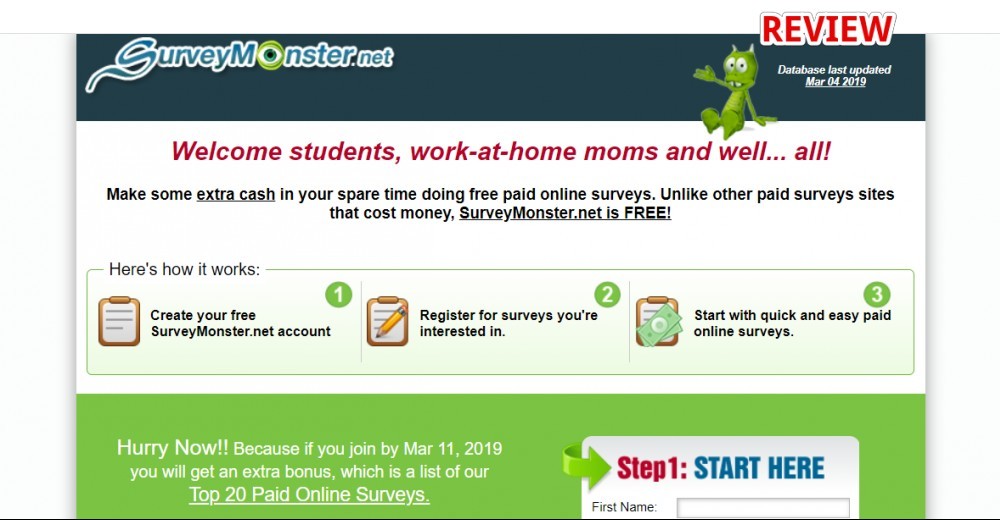 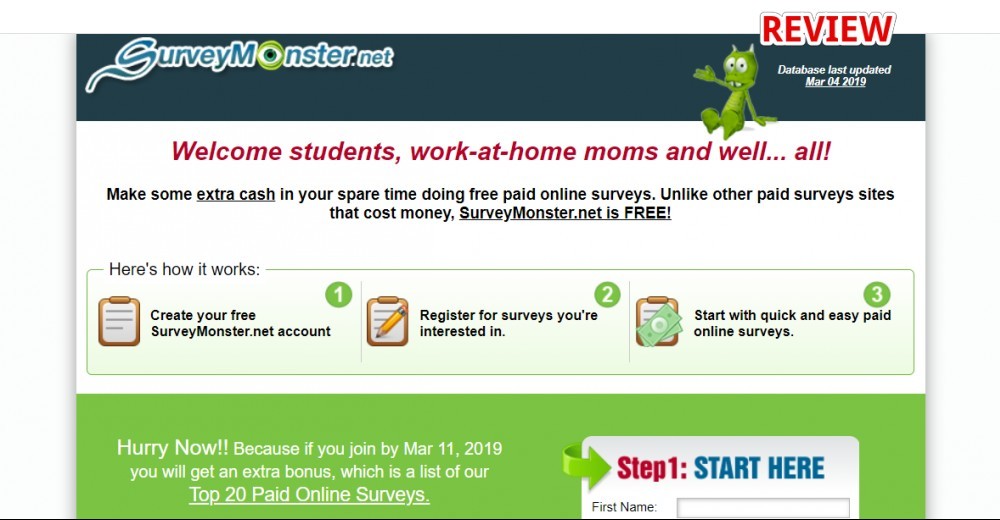 Survey Monster is not the survey site that it claims to be, and I’ll show you why in this review.

Is Survey Monster legitimate? The answer is both yes and no, but mostly NO. It is not like this site is doing anything illegal, but it is very “scammy” and I would definitely not recommend anyone to join.

I know, I know… It is promoted as a great way to earn some extra cash in your spare time, which sounds awesome, but this place is just going to be a waste of time.

*Before I dive into this review I want to make it clear that I am reviewing the Survey Monster site located at SurveyMonster.net. There is also a SurveyMonster.com website but this is for people looking to create surveys, not take them and make money online.

What Is Survey Monster?

Well… At first glance it appears to be pretty much a typical paid survey site, in which you would take surveys provided by them and research companies that they work with, and make money from them. It does look a little run down, but not too bad I guess. HOWEVER, as I said it is not as it seems.

Basically what Survey Monster really is, is a “scammy” website that lures people into joining a bunch of other survey sites just so that they can make money off of you.

Don’t worry, you will see what I mean in a bit.

When I first came across this site I decided to register and give it a try just to see what it was all about. They had testimonials displayed (like that pictured below) which make it sound pretty awesome…

Also, you can see above that they are telling me to hurry up and register so that I get an “extra bonus”. So I decided to give it a try.

Sounds pretty simple… Just create your account, register for surveys and get paid…

But, of course, as you can imagine, it probably isn’t quite what you would think at first.

My Experience (Not Good)

So after entering my personal information to join, which included things like my name, date of birth, ZIP Code, gender, email, etc., it then was asking me to join a bunch of other paid survey sites.

You can see in the screenshot I took below. It was asking me to join popular survey sites like Toluna and Global Test Market, which I am very familiar with. HOWEVER, just because I am familiar with the sites doesn’t mean that I want to join them. 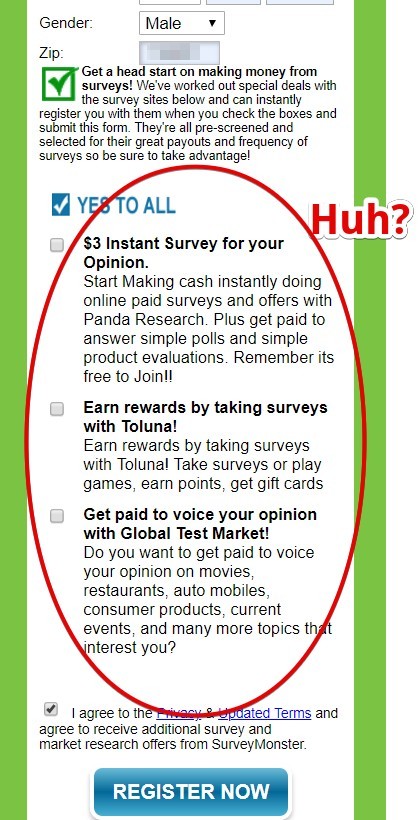 This was the first of several red flags that popped out at me and seemed very “scammy”.

Why would this place be asking me to join other paid survey sites? I thought I was joining Survey Monster to take surveys and make money online…?

Then after submitting my information I was then taken to a page that told me I could “earn up to $150 or more per hour” and that “on average you make around $20 per survey, which takes 10 -12 minutes”.

Are you freaking kidding me?

I can potentially make $150 or more per hour and on average make $20 per survey?? That sounds incredible… But unfortunately it also sounds a lot like a scam.

Below that they had a list of their “top paid surveys” that I could sign up for.

But is not what I was expecting when I first came across this website. It is not like I could click on surveys, take them and make money. Instead, it just provided me with a big list of other paid survey sites that I could join.

…that I am very familiar with and have reviewed in the past. 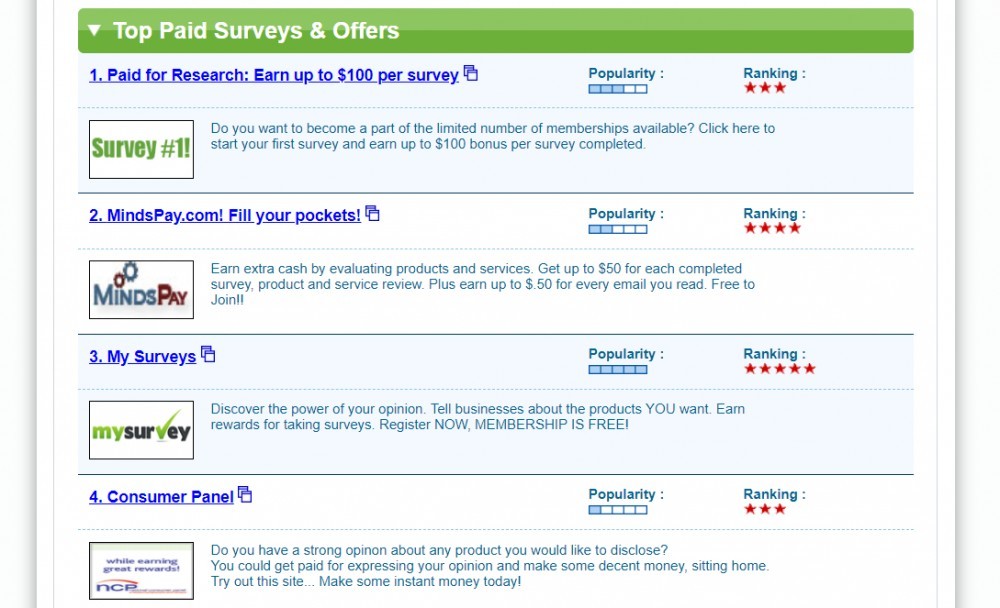 The problem is that there is absolutely NO way you were ever going to make close to $20 per survey on average or $150 per hour. This is a ridiculous claim that has absolutely no truth to it.

These websites that it is recommending that you sign up for are your pretty typical paid survey sites. Generally speaking you WILL NOT MAKE MUCH!

You can expect to make 1 to $2 per survey that you take and once you factor in all the time that you waste getting disqualified from surveys and things like that, you are pretty much guaranteed to make much less than minimum wage.

Doesn’t Seem Very Legitimate to Me!

So is Survey Monster legitimate?

I think you can see the answer now. I mean, I guess they aren’t doing anything illegal, but what they are doing is definitely scammy.

They are lying to people just to get them to sign up for other paid survey sites.

Maybe it is illegal… I don’t know.

The point is that there is no way that you are going to make $20 per survey on average and they know this darn well. The reason they say that is because they want to make it sound like the greatest opportunity ever to get as many people to join as possible.

The Reason They Lie to You

The reason they are lying and trying to get people to join these other paid survey sites is simple… They make money from it!

Yes, you can actually make money by getting other people to join paid survey sites. If you have ever been a part of survey sites in the past, you probably already know this. They all have referral programs, and although you won’t make much, by referring massive amounts of people the money adds up.

This is the same thing that other sites like My Survey Jobs does, which is another scam I exposed here on my site.

There are a heck of a lot of paid survey sites out there, many of them legitimate and many of them scams. While I wouldn’t call this a complete scam, I would definitely say that it does lean towards the more scammy side of things. And for this reason I am not going to be recommending any of my readers join it.

There are a lot better paid survey sites out there. If you want a personal recommendation from me, I would suggest Swagbucks. Swagbucks has been around for a while and is well trusted.

That said, one thing you have to realize about any paid survey site is that you are not going to make much money. This sort of opportunity is best for people looking to make just a little bit of pocket change in their spare time. If you want to make good money online then I would recommend reading this guide I put together that explains how I do so, and how you can do.