Is Quick Paid Surveys a Scam? – What You Should Know

If you are looking to make money taking surveys online then Quick Paid Surveys (aka Quick Pay Survey) it is one of the options you have. But is this a very good option? That is the real question. After all, there are many different paid survey sites out there and you are by no means limited in your choices. So is this place worth your time or is Quick Paid Surveys a scam that you should be avoiding?

In this review I’ll be going over different aspects of this survey site and giving my opinion of whether or not I think it is worth your time or not. I will be going over how it all works, the different ways you can make money, getting paid, complaints and more.

When I first landed on this survey site I was a bit skeptical. What I noticed is that the name of the website “Quick Paid Surveys” is different from the registered trademark name which is Quick Pay Survey. But anyways… This is in that big of a deal. It was just something that stood out to me and seemed a bit strange.

Quick Paid Surveys isn’t anything out of the ordinary when it comes to paid survey sites. They offer several different ways to make money besides taking surveys, it is free to join, and they don’t pay all that much… Which is how every paid survey sites out there is like nowadays.

Overall this site does not appear to be a scam, but it is not a survey site I would recommend, and you will see why in this review.

Well… First off you have to sign up. This is for you to do and you will get a $3 bonus for doing so. After signing up you will have multiple ways to earn money. You can take surveys, complete offers, read paid emails, or refer friends to join Quick Paid Surveys as well.

Generally the surveys pay between $0.50 and a dollar, as they tell you on the website. This isn’t very much at all obviously, but at least they don’t mislead you into thinking you will be making more. They tell you like it is.

All the site really does is hosts surveys from other sites. As you can see below there are surveys from Global Test Market, MyThoughtsCount, SaySo Rewards and so on… 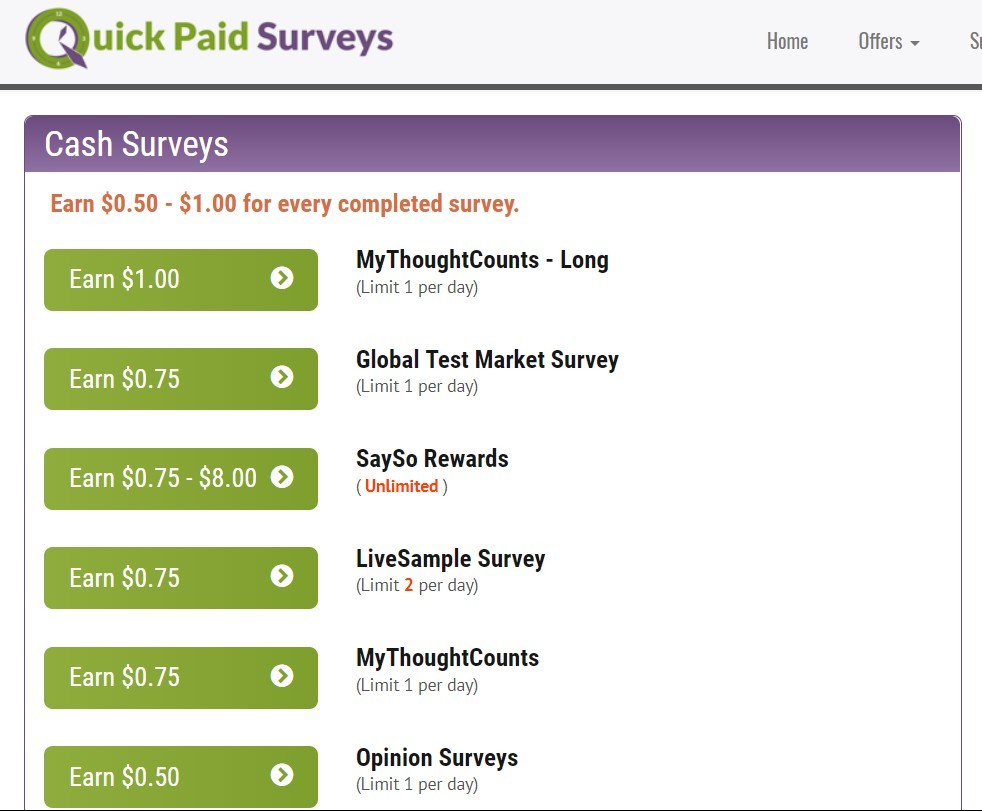 These survey will usually take anywhere between 10-25 minutes. Usually the longer surveys pay out more but this depends.

And although you can expect to earn between $0.50-$1, there are some surveys you will find that will pay higher… Although rare.

Another option that you have to make some extra money is by completing offers. When you are logged into the dashboard of Quick Paid Surveys you will see a tab that you can click on to see all the available offers. Many of the offers will just be to take surveys, which is strange because I don’t see why they don’t just include this in the surveys tab, but there are other offer such as: signing up for credit cards, signing up for other offer sites, signing up to receive coupons in free samples, and so on.

When it comes to the offers there is really no telling what you might find here.

Have you ever heard of getting paid to read emails? Will this is a real thing. Even some other paid survey sites like  Inbox Dollars, for example, pay people for this.

Here you will earn between 1-5 cents per email and can choose to get them daily if you want. However, these are not unlimited and the higher-paying emails you choose to get, the faster you will run out of available emails.

How Much Can You Make

The answer is not much. Just think about it… Making up to $1 per survey and up to five cents per email that you read… Is barely anything.

This opportunity is best looked at as  way to make some extra pocket change in your spare time. It is certainly not money that you can depend on for anything.

The payout method that they have is PayPal. They do not give you the ability to redeem your money or points for gift cards, but PayPal is good enough in my opinion. PayPal is good old-fashioned regular money that you can use for anything, so what is there to complain about?

Also, they pay out to PayPal within three days which is pretty fast compared to some other survey sites out there.

The downside is that you will have to reach a $15 minimum balance in your account before you can request a payout. All survey sites, will just about all them, have a threshold that you have to meet like this, but $15 is fairly high I would say. Many of the survey sites out there have their threshold set at $10.

Why do they have this minimum payout threshold? Well what I think is that, for one, it obviously reduces the amount of work that they have to do processing payments. If people were able to cash out after every couple cents they earned then the team working behind the scenes at Quick Paid Surveys would be working day and night just processing payments. In two, I think that one of the reasons they set a threshold like this is because they are well aware that many people will give up before ever reaching the threshold and then they will not have to pay them for their time. Now this of course is just my own little theory, but I’m pretty sure it’s true.

Some complaints I do have however, include…

Making $0.50 – $1 per survey is not very good of a deal. All paid survey sites or low-paying, but you will find ones that will pay up to two dollars much more regularly.

Also, just think about the money you’re making reading emails. You’re making five cents at most, which means that you will have to read 20 emails just to make one dollar… Pretty darn low. In the offers aren’t really any better. The amount you will make per offer varies a lot more because the offers differ a lot and you never know what to expect exactly, but there isn’t anything to get excited about with them either.

Much of the time that you spend on this site will be a waste of time. Why? Well because you will start to take a survey and then be disqualified.

The reason for this, or at least much of the reason, is because Quick Paid Surveys does not require you to file profile. Most survey sites will require you to fill out a profile where you will fill in information about yourself. This is important because it is used so that they can match you up with appropriate surveys. Quick Paid Surveys does not do this and just gives you random surveys, many of which you don’t actually qualify for and you won’t find this out until after you waste some of your time trying to take them.

Honestly Quick Paid Surveys is not a good paid survey website, which is why they are so unpopular. This place has been around since 2009 in there is still almost no information on them, which is because no one uses this place.

They just barely pay anything,  don’t offer much opportunity to earn, in the whole disqualification thing because they don’t require a profile is a big problem that will lead to a lot of frustration.

There are much better survey sites out there. If you will are looking for a better one than I would suggest Swagbucks. Swagbucks offers a lot more ways to make money, is a heck of a lot more popular, makes things a little bit more fun, and is just all around better.

That said… You have to realize that paid survey sites like this pay extremely little and are largely a waste of time. If you want a better way to make money online in your spare time then I would suggest taking a look at how I went from $0 to over $6k a month online, which is a heck of a lot more than you could ever make taking surveys.

Please feel free to leave any questions, comments, or concerns below and I’ll get back to you as soon as I can 🙂