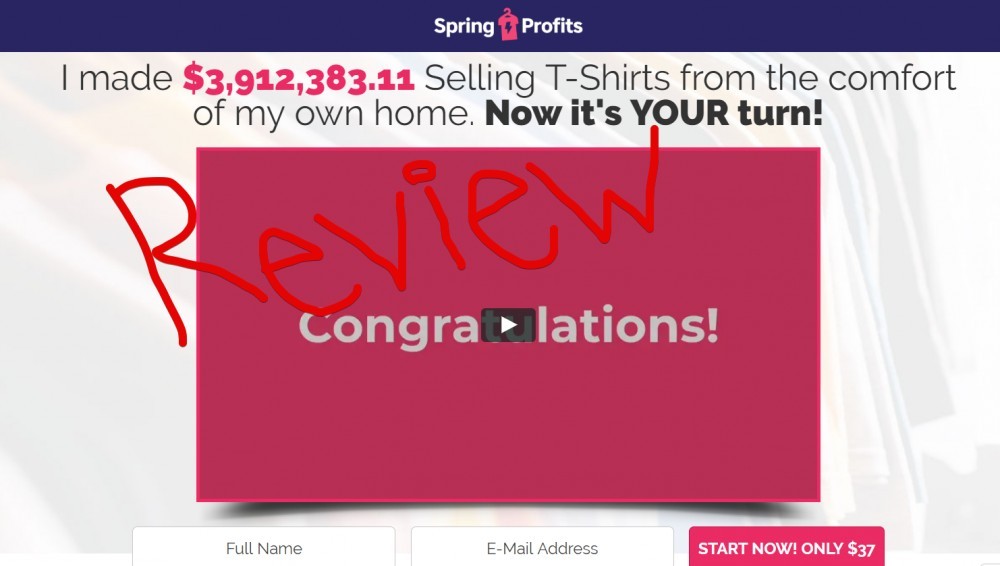 Can you really make money with the Spring Profits system? Or is this just another scam?

Daniel Green, the guy who supposedly created this system, claims that “I made $3,912,383.11 selling t-shirts from the comfort of my own home”.

Over $3 million?? That is a heck of a lot. And if it is true that is pretty incredible.

But is it really true?

After all, it’s not like I haven’t come across similar looking systems that have turned out to be scams many times in the past. Right off the bat I was suspicious of this place. It just sounds a little bit too good to be true. And you know what they say about things that sound too good to be true… They probably aren’t true.

Red Flag #1 – My Link Has Been Activated

In the video presentation one of the first things you are told is that “your link has been activated”.

But what link? What are they talking about?

This might get you excited but I have heard similar sorts of claims many times before, from programs that were scams and that I exposed, such as Copy My Cash Code and Money Sucking Websites. Usually they will say something like “we are setting up your account now”, “we are activating your money making system”, or something along those lines. 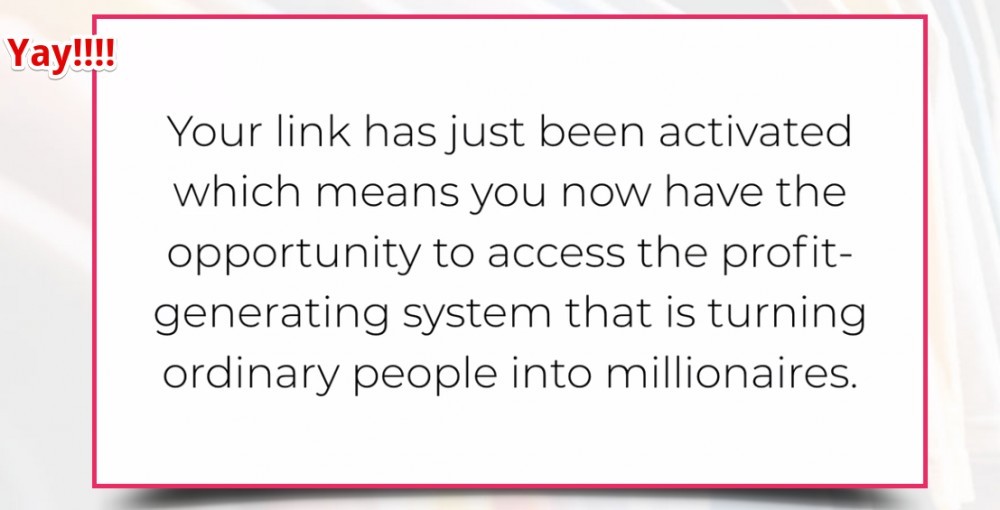 They also tell you that you are “one of just a few lucky individuals who will ever hear this message”.

However, I know for fact that this is a big fat lie. There are tons of other people who have been hearing this message because there are tons of people promoting this system like crazy.

You probably ended up coming across the system after getting some email about some new awesome way to make money online. And believe me, there are thousands of other people who have gotten that same email.

There certainly are NOT just “a few” people to hear this message.

You are also told that “average Joes have been making in excess of $25,00 every single week”.

And of course it only requires 10 minutes of work per day.

Now if that doesn’t sound too good to be true then I don’t know what does. I’ve learned a thing or 2 over the years and one thing I have learned is that when something sounds too good to be true, especially when it comes to “make money online” programs, it is probably a scam.

You also probably noticed that the guy offered absolutely no proof of this being true.

Remember the videos that were shown in the presentation… The ones from people claiming to have been using the system and making tons of money with it? 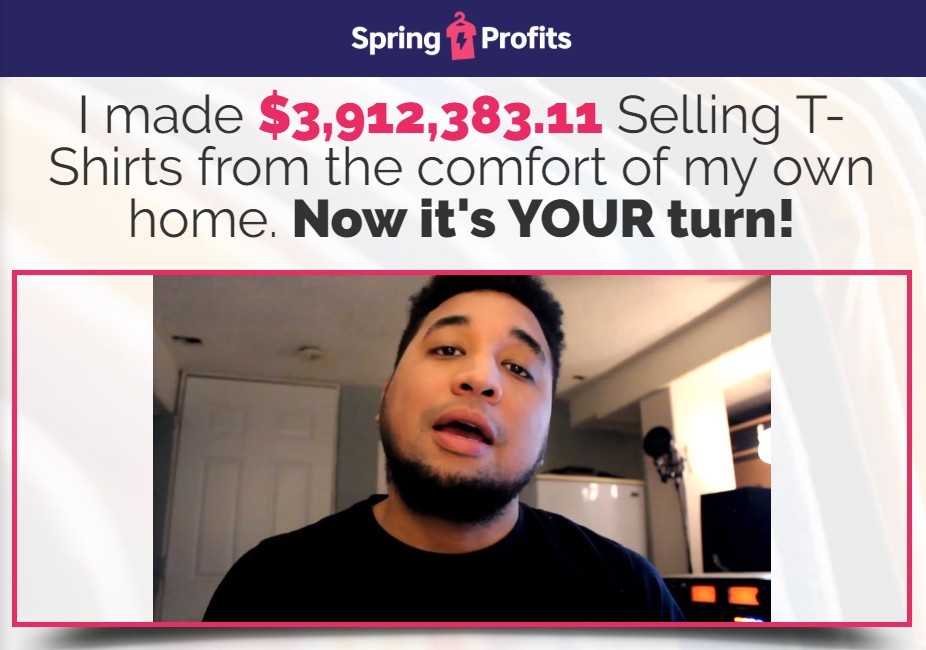 Ya… Well unfortunately they are all completely fake. The people shown in these videos are actually paid actors. After doing a little digging around I was able to find this guy’s profile on the freelance marketplace website called Fiverr. As you can see anyone can pay him to make a spokesperson video… 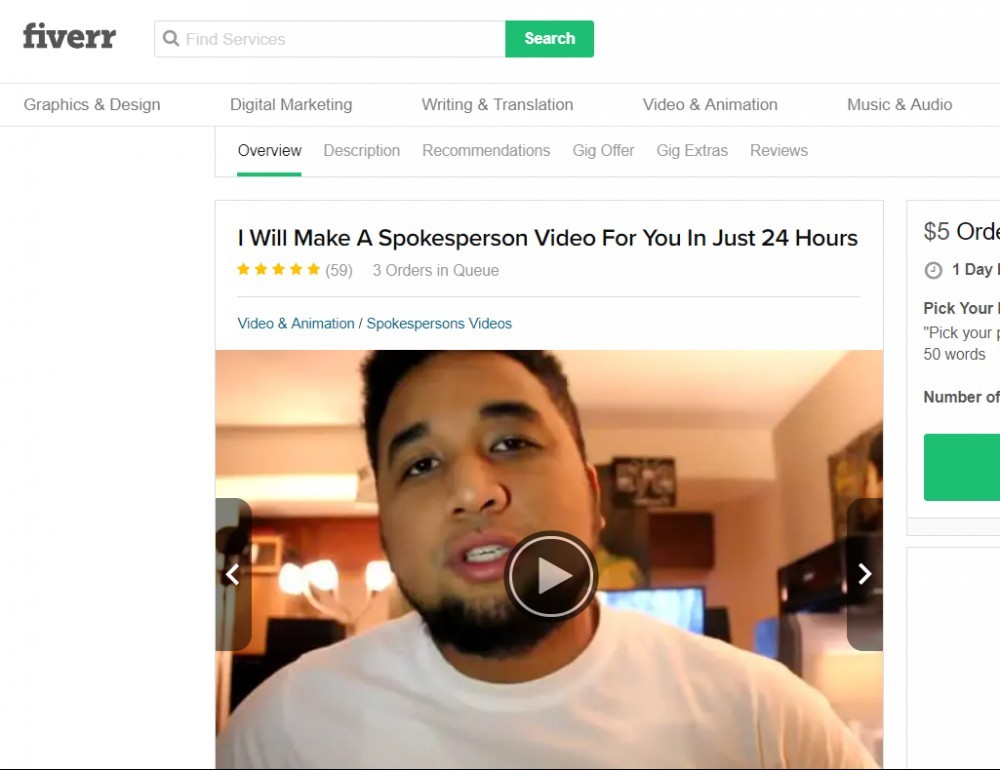 Another major red flag is that we have no idea who this Daniel Green guy even is. He brags about how much money he is making with this system, but of course he offers absolutely no proof of any of it being true. This information could easily be made up, and I’m guessing that it probably is.

And why does he never show his face? Why doesn’t he provide any verifiable information? If this really is the amazing system that he claims it is, you would think you’d be more than happy to stand behind it and show himself.

The fact that the creator remains hidden for the most part, other than the fact that he says his name is “Daniel Green”, is a major red flag and a common characteristic of a scam.

So there are a lot of red flags, and this definitely seems really scammy, but does it have any value? What exactly is Spring Profits and can you make any money at all?

The truth is that this place is not a complete scam, and yes it is possible to make some money, although I definitely do not recommend it.

What Is Spring Profits?

In a nutshell, Spring Profits is a training course that teaches people how to make money selling T-shirts online through a website called Teespring.

Teespring is a website where people can design their own merchandise, such as t-shirts, phone cases, mugs, etc. and sell them online. This is an easy way to go about it because you don’t actually need to get involved in the manufacturing process, you just make your design and they handle the rest.

From what I understand, this place doesn’t require any upfront payment and they manufacture your designed products as you sell.

This is a completely legitimate way to make money online and, although “Daniel Green” may be completely fake name and he may have not made any money doing this, I do know for a fact that there are people making some good money selling T-shirts this way.

That said, it is a heck of a lot more difficult than this guy makes it seem.

It Is NOT Easy, Nor Is It Free

In the video presentation the guy makes it seem like this is the greatest opportunity to ever bless this earth, and he makes it sound super easy, but it is not.

Can you really only spend 10 minutes a day in the make millions doing this? Well I guess it might be possible, but I sure as heck would not count on it. That would be like counting on winning the lottery jackpot, chances are incredibly low.

You have to have the right design and market it to the right audience…. which is easier said than done.

You also should know that this WILL cost money…. Upfront.

He only tells you all the things that you want to hear, and of course no one wants to hear about the money they’re going to have to spend, so he just doesn’t tell you this part.

When it comes to selling T-shirts there is a lot of competition. You are not going to be the only one and this makes it a lot more difficult. In order to make sales you will have to drive traffic to your products, and paying for advertising is not easy nor is a cheap. Sure, if you get everything right it can potentially be very profitable, but you can also blow your money like crazy doing this.

Well… The front end product is only $37 so I wouldn’t expect to get much.

This seems to me like another very over-hyped product that probably is going to be a disappointment. That is usually how it goes for products that are promoted like they are the greatest things ever… They turn out to be massively disappointing.

I don’t know how good the training actually is, but based on my experience online I would not expect much. They probably provide some pretty basic training that will show you how to get everything set up and what you have to do, but that’s probably about it.

It seemed like a scam when I first landed on the video presentation and after reviewing it more it still seems like a scam, for the most part anyhow.

It sounds too good to be true, we have no idea who this “Daniel Green” character is, there is absolutely no proof of the money he claims to have made, the testimonials shown are fake, and so on.

This definitely does not sound like something I would buy into and I am not going to be recommending it to my readers.

If you want a legitimate way to make good money online, I would highly suggest taking a look at how I went from $0 to over $6000 a month online working for myself.