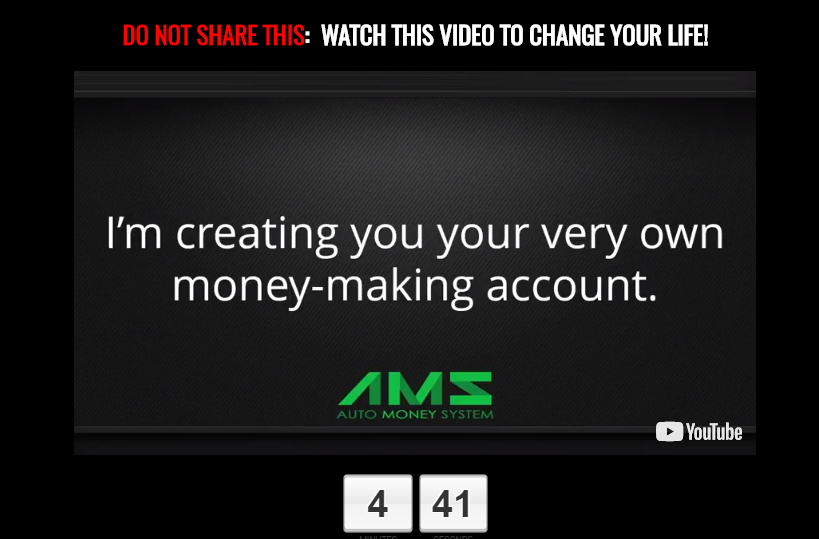 I decided to write this review because I know there are going to be a lot of people out there that can benefit from it. Many people, such as you, are going to be suspicious of this program and will look for more information about it to see if its legit, which its not as you will see.

The Auto Money System claims to be pretty much the easiest way to make money online that I have ever heard of.

It was created by “Kathy Graham” and she claims it only takes 1 click to start generating commissions with this system. That’s right… just 1 click. The rest is completely automated. You can then just sit back and enjoy the money coming in.

The only downside to all of this is that it is a complete scam and you won’t make any money with this system. You will just end up with less money than when you started.

This scam is actually a duplicate to One Click Pay Day, which I recently reviewed. The only difference is that One Click Pay Day is said to be created by “Kathy Evans”, other than that the sales video is the same.

Some Things You Should Know

The testimonials that are shown in the promo video are fakes. Its unfortunate because it would be great if people really were making money like they claims… but they aren’t

I knew they were fake the second I saw them because I have seen the people in these videos before. They are paid actors/actresses from a site called Fiverr, where anyone can go to pay people to create videos like this and more.

One example I have for you is this guy… He claims to be making around $20,000 per week with this system…

And all the other testimonials are fake as well. I think showing one is enough to prove this point though.

Is “Kathy Graham” Even Real?

In the promo video that I watched the lady speaking claimed that her name is “Kathy Graham”, but I doubt this is true. If she was real and this program was real then this lady would be a superstar. Having created a program like this that can make you money in 1 click, she would be all over Forbes magazine and others.

But the problem is that there is no information on her having to do with anything like this. The lady does not exist.

Be Sure to Read The Disclaimer

One thing you should always make a point to do is to read the disclaimer for programs like this when you are suspicious of them. Usually in the disclaimer it will tell you the truth of whats going on. This is how scams can operate legally online. They can tell you all the BS they want but as long as in the disclaimer they tell the truth then they are good to go.

Anyways, check out what the disclaimer for Auto Money System says…

It literally says that “the typical purchaser does not make any money using this system”, yet throughout the whole promo video the guy talks about how easy this system is and how you are pretty much guaranteed to make money.

And a strange thing I’d like to point out is that in the disclaimer it also refers to the “Easy Internet Plan” program. My guess is that this disclaimer was taken from this old scam program and re-hashed here.

Conclusion on Auto Money System – Scam for Sure

This system is without a doubt a scam and I’m sure you already knew that in your gut. As if the bold and ridiculous claims that are made aren’t enough to prove it, they literally tell you that it is a scam in the disclaimer.

The bottom line is that there is not super easy, 1-click, completely automated way to make money online. Everything takes work and effort. This is the realization I have come to since I started making money online in 2015.

Questions, comments, concerns? Leave them below and I’ll try to get back to you soon 🙂