Is Digital Formula a Scam by Neil Carter? – EXPOSED

Digital Formula is supposedly some incredible new “formula” that a guy named Neil Carter came up with for investing in cryptocurrency that could make you a fortune. In fact… He claims that with this you could make $2254 in the next 24 hours. But is this really true? Or is Digital Formula a scam that you need to stay away from?

Since you are reading my blog here I am guessing that you are suspicious of the whole thing. If this is true then you are on the right track. The fact of the matter is that Digital Formula it is not the incredible system that is said to be. In short… This is a scam. A very misleading one.

So Digital Formula is the creation of Neil Carter, who claims to have been a software engineer that lost his job and developed this incredible system for investing in cryptocurrencies after becoming obsessed with bitcoin.

When you land on the sales page for Digital Formula you are greeted with a video presentation that starts off telling you that you have been carefully selected to view the video. This is not true by any means. It is just a way to try to make you feel special so that the opportunity seems better than it really is.

He tells you that you could be earning up to $2254 in the next 24 hours and says that some people have been making over $15,000 using this system already.

It sounds too good to be true, but then he shows you a video clip of someone who has supposedly use the system and this guy claims that it has made him over $15,000 and he has paid off his debts, booked a holiday vacation and more.

HOWEVER… This guy actually has never used the system a day in his life. He is a paid actor that the people behind this program hired from the site Fiverr, which anyone can go to in order to hire a spokesperson for their product/progra. In other words… This video means nothing and everything that he said was a lie. 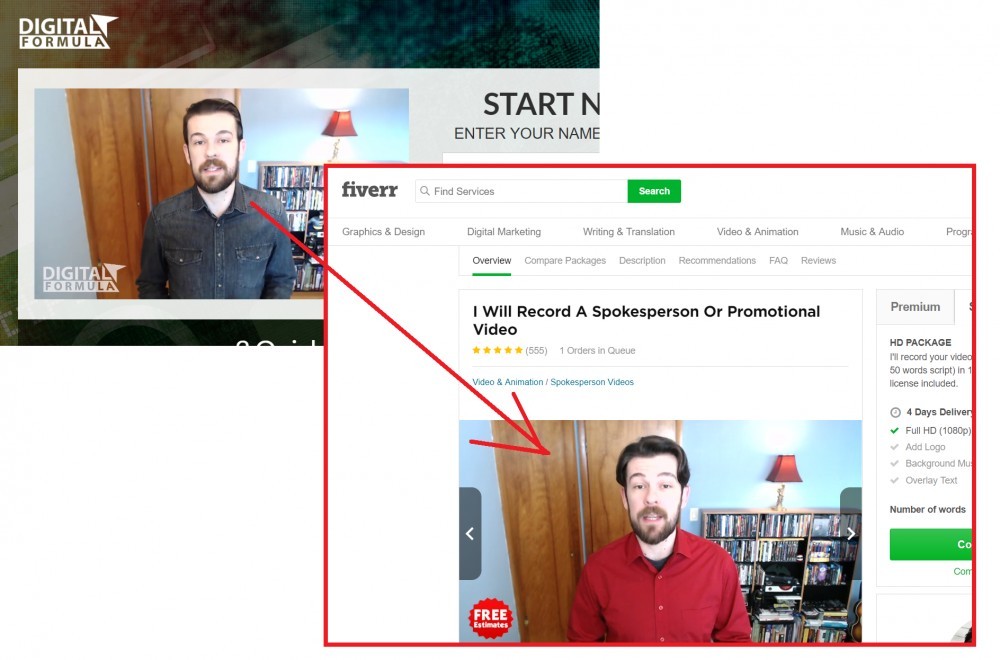 But anyways… This formula is supposedly very controversial and exploits the cryptocurrency marketplace.

It is some “secret strategy” and literally everything that you are told seems very suspicious. I have reviewed countless scams on the site, many of them dealing with cryptocurrency. Cryptocurrency scams seem to be on the rise due to the increased popularity and this seems like many known scams that I have reviewed in the past, such as Crypto Cash For Beginners and Crypto Coin Sniper.

He tells you that you could be earning $2254 in the next 24 hours but doesn’t really give any details on this. The system is supposedly focused on investing in making profits from your investments but this still doesn’t give me much to work with.

I mean if I was a millionaire I could invest $1 million and even with just a 1% return I would be making $10,000. But a 1% return really isn’t any good, especially when we are talking about cryptocurrencies here.

The point I am making is that saying you could make $2254 and 24 hours is a stupid thing to say. The amount you make will largely depend on the amount you initially invest, and this is something that he doesn’t know.

Did you ever get the feeling that this Neil Carter guy was completely made up? That he doesn’t even exist?

Well I have and that this is not out of the question by any means. There is absolutely no proof that this guy does exist and there is no way for me to verify any of the information that he tells about himself.

I’m guessing that he is made up for the sake of promoting this scam system because I have seen it 100 times before with similar scams.

As I already went over above, the testimonial videos are all fake. The creators of the scam paid actors to fake videos for them so that they can have a better chance of tricking people into buying this.

If this program really were all that great, as it is claimed to be, then why couldn’t they get real testimonials from people who have actually tested it out? It should be easy to do this and I am sure people would be more than happy to if they were making thousands of dollars per day with it.

One major red flag is that the spokesperson seems to have absolutely no idea what he is talking about. The reason for this is likely because, as I said, the guy is a fake.

He talks about how the system provides the framework so that you can get started investing in cryptocurrency and then shows you how to do it, but then goes on to say that with this system you will “quickly learn the skills you need to trade cryptocurrency confidently and profitably”…

This just doesn’t make any sense in this guy obviously has no idea what he is even talking about.

If this system, program, method… Whatever you want to call it, were really as good as it is said to be, then why is it only being sold for $17? This guy could be selling it for tens of thousands of dollars easily.

Of course you are led to believe that he is doing it because he is just that kind of person… Out of the kindness of his heart he is selling it for so cheap. However, the real truth is that this program is junk and is definitely not worth any more than that.

The video presentation is just absolutely filled with BS.

The guy claims that this system has been beta tested with over 100 people in that they have all made consistent money. Saying that they have made “consistent” money is one of the biggest mistakes he could have made.

I have been involved with cryptocurrency investing and trading for well over eight months now and anyone who has been involved in this for an extended period of time would know darn well that nothing is “consistent” about it.

While the cryptocurrency markets have seemed to calm down a bit recently and are not as volatile as they once were, they are still extremely volatile when compared with more traditional markets, such as the stock market.

I am mostly active as a cryptocurrency trader and there are many days where there isn’t really much to do, and other days there might be plenty of good trades to make, meaning that some days I will make good money and other days I’ll make next to nothing. The same goes for investing.

Should You Trust This Place?

What it all comes down to is trust. This program is supposedly going to be presenting you with the most profitable opportunities out there but how do you know that these are going to be any good? It is just as easy to lose money investing/trading in cryptocurrency as it is to make money.

And how can you possibly trust this place? After all I just showed you… After all the lies and misleading information you are told?

This is deceptive marketing at its finest. They lure people in by telling them exactly what they want to hear… That you can make super easy and fast money online with little work. But of course the reality is much different than that.

If you really are interested in getting started in cryptocurrency investing then there are plenty of free resources out there that you can look into. My advice would be go to YouTube where you can learn how to actually open up an exchange account and purchase cryptocurrencies in the first place. Then after that I would suggest doing your own research and finding what cryptocurrencies you personally think have good potential.

What I definitely would not do would be to trust this Neil Carter guy who probably doesn’t even exist and who has lied to you over and over again throughout the video presentation.

You can absolutely buy into this if you want to, but I can pretty much guarantee you will regret it. As I’ve said, I review products like this all the time and after reviewing them I always get people commenting on my blog asking how they can get a refund in things along these lines.

Please leave any questions or comments down below and I’ll get back to you as soon as I can 🙂 I hope you enjoyed my review.