Is Digital Payday a Scam? – It Sure Is! [Review Exposes It] 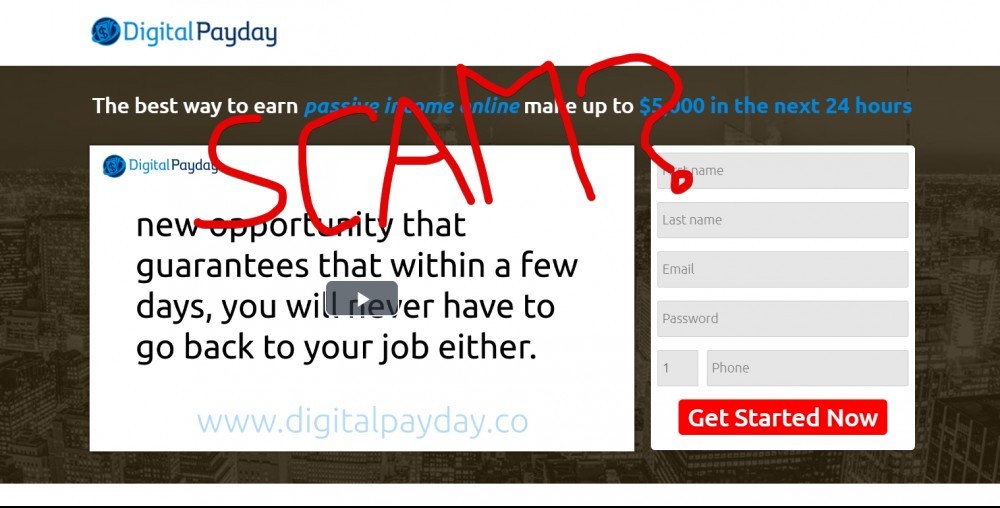 Digital Payday it is said to be some incredible way to make money online that most people do not know about, but is it really? Are people really making tens of thousands of dollars each month with this super easy automated system? Or is Digital Payday a scam that you need to avoid at all costs?

It may sound enticing and the video presentation may look legitimate, but Digital Payday it is far from being a legitimate way to make money online. You ended up going with your gut feeling and were suspicious of the claims that were made, so you ended up doing a little bit of research and came across my review here. While it is a good thing that you did because the system is a definite SCAM.

In this review I’ll be going over what they tell you, some red flags that show this is likely a scam, and how they actually scam you out of your money.

Digital Payday is supposedly some automated system that uses a “little known method used by Google and Facebook” that is earning people tens of thousands of dollars each month. And of course the doors are opening up so that 50 more people are allowed to use the system… Which is a way of pushing people into signing up as fast as possible without doing the extra research and finding out that it is indeed a scam.

However, there is no verifiable proof of what this guy is telling you. He easily could be just making up a bunch of names and after reading the rest of my review you will realize that this is exactly what he is doing… These income claims are not true.

The the entire video presentation is filled with a bunch of absolutely ridiculous income claims, one of the most ridiculous being that he “guarantees that within a few days, you will never have to go back to your job”.

The guy behind this all is named Daniel Bluth, as I said, and he claims to be a self made millionaire. He says he has tried and failed to make money online many times, but of course this all changed when he came across this “secret” that Google and Facebook are using to make tons of money.

But you can forget all about what he says about himself because this guy is likely completely fake. I ran a reverse Google image search of the image they show for him on the website and found that there are multiple other websites using this image… Which means that it is likely a stock photo that anyone can purchase online and use as they wish…

Okay… So there are unverifiable income claims, everything just sounds too good to be true, the alleged creator of this program is likely a fake… What’s next?

Well what’s next is that you are presented with a bunch of fake testimonials. Next stop there are a bunch of videos of people that have claimed to use the system and say they are making tons of super easy money. It would be nice if this were all true and we all could make it rich so easily, but unfortunately all these testimonials are as fake as can be. Take for example the one below, this woman is just a paid actress that is for hire on the site called Fiverr… She is just saying what she is getting paid to say… 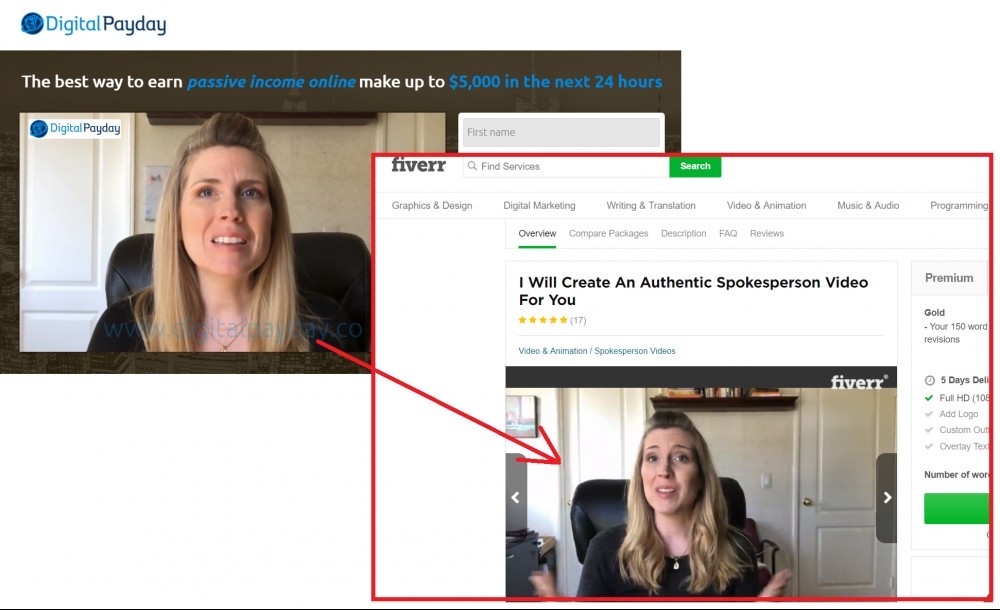 The video presentation goes on to feed you a bunch more lies. One of the most ridiculous that I heard was when the guy said that Mark Zuckerberg himself actually gave a speech on Digital Payday and how it is changing lives. On the screen he showed some photoshopped image of Mr. Zuckerberg supposedly doing this, but of course it is all a complete fake.

How This System Makes You Money (allegedly)

It is all about running ads, which the guy tells you is the single easiest way to make money online. He says it is super easy but the reason most people don’t do is because they don’t know where to start.

What the system supposedly does is automates the digital ad process by connecting users to some “secret website”.

This secret website that he is talking about is called Clicks Dealer, which I have encountered in the past. In fact, I have actually written an entire review on it to warn people about this nasty scam.

Red Flags That Point To This Being a Scam

There are many red flags that point to this whole thing being a scam that you should be aware of. Of course there are the ones that I already went over, such as Daniel Bluth probably being completely made up, the fake testimonials, the unverifiable income claims, etc. Some others that you need to realize and think about include

Whenever something sounds too good to be true then it probably is. This is a very good saying to live by and will save you from many scams if you do live by it.

They claim that all you do with the system is pick which ads you like and everything else is completely automated… It then starts pumping out tons of money for you by flipping these ads. The one woman in the video testimonial said that all she does is clicks the refresh button all day long and watches her money grow.

Come on now…. Things are never this easy.

Of course not only is it easy but it is also a way to make insane amounts of money. Beware of systems that make massive income claims. There definitely are ways to make good money online, and lots of it, being able to make tens of thousands of dollars each month by doing nothing more than selecting some ads… Things do not work like this.

And of course the system is free to use… Mr. Daniel Bluth is letting you use it out of the kindness of his heart. What a nice guy, right?

You may be wondering… Well how can they scam you? How can this whole thing be a scam if they allow you to use it for free?

Well… I’ll tell you how:

After you join the Digital Payday system for free you will be directed to a broker where you can deposit your initial funds. Of course you’re going to need to deposit some money to get everything started. The system will then use this money supposedly to purchase ads on your behalf and then flip them for you, making you money.

HOWEVER… They will be directing you to a completely unregulated broker that is far from being trustworthy. What happens in these types of scams is that the people behind them get paid commissions when they refer people to these brokers. Every time someone signs up through this scam system and deposits money to these brokers, they get a kickback and profit from it.

If you do end up going through the whole thing and do deposit money to one of these brokers you will likely never see that money again. They might make you think that your money is growing, by showing the amount of money in your account increasing, but these are just numbers on a computer screen. If you then try to withdraw that money you will find that you will not be able to.

There are a bunch of scams out there like this. Some of the more recent ones that I have reviewed include: Daily Banner Profits, 1K In 1 Day, and Crypto Dukes.

I have reviewed the scams like Digital Payday plenty of times before. They are nothing new to me. This one is a definite scam, no doubt about it. If I thought there was any chance of this system being legitimate then I would say so, but there is no doubt in my mind that it is a scam.

You are more than welcome to join and test it out for yourself, but I certainly am not going to recommend doing this.

If you want a legitimate recommendation from me then I would look no further than Wealthy Affiliate. Wealthy Affiliate is the same program I got started with back in 2015 when I first started looking for ways to make money online. To make a long story short… I am now making a living online which goes to show that it does work, but of course is no “super easy” “completely automated” system… It does require real work and real effort.

You can click the button below to read my review of Wealthy Affiliate if you are interested in learning more. This is definitely a good program for beginners, I know this from experience.