Fast Cash Club is some new “ecom profit system” that was created by a guy named John Harris. He claims that people with no experience or skills whatsoever can make $2000 per day easily with this system, but is this really true? Is this really the “first ever drag and drop ecom profit system” as he tells you? Or is this all just a bunch of BS? Is Fast Cash Club a scam that you need to avoid?

Unfortunately, what you are told and what is the truth are two different things. What I mean by this is that, put simply, Fast Cash Club is a scam. You are not going to be making $2000 per day with this system and I have reason to believe that you will not make anything.

In this review I’ll be exposing this scam for what it really as. If you are possibly thinking about buying into this, you are definitely going to want to read over my review in its entirety and rethink it all.

You are probably reading my review now because you are a bit suspicious of the claims made about the system. It probably sounded too good to be true and you wanted to do a little more research before possibly getting scammed. And rightly so… The video presentation is absolutely ridiculous and sounds like a fairytale. It reminds me of some recent scams I’ve exposed like Ad Formula and AZ Sniper.

The video presentation starts off with John Harris talking about how this could change your life forever and that ordinary people, just like you, are making thousands of dollars per day like clockwork… Over $2000 per day each and every day.

Then early on in the video presentation he shows you a video testimonial from some guy he was supposedly making thousands of dollars with the system, and this is one of the first major scam signs that I spotted.

Why was this a major sign of a scam? Well… Because I have seen this guy plenty of times before. He is not someone who is actually using the system, this guy is actually a paid actor that is available for hire on the freelance digital marketplace called Fiverr, as you can see from the screenshots I took below…

But anyways… Just because this video testimonial is a fake, this doesn’t necessarily mean that this is all a scam.

Moving on… John claims that 117 people have already tested out the system and have been making over $2000 per day. He also claims that this video is like nothing you have ever seen before… It is not the typical garbage that fake gurus try to sell you. He makes it very clear that this is not like anything you have ever seen, although he offers no good reason why it is so different…

There our obviously red flags everywhere, and I could go on forever talking about all the reasons this closely a scam, but below I’ll go over six major red flags that really stood out to me in which you should be aware of.

Obviously it is a major red flag that he claims you can make $2000 per day with this system. $2000 per day is a heck of a lot of money and 99% of the time systems that claim to be able to generate easy income like this turn out to be massive scams.

Another major red flag is that there is little work required. He doesn’t specifically say what the work is that will be required and how long it will take, but he does say it will take just a “few clicks”, that it takes less than an hour per day, and at one point in the video he claims that he only works for 15 minutes per day online.

I can say from experience that I have never came across a “super easy” way to make money online. I’ve been involved in online marketing since 2015, and make a living online currently, but I do not know of any system that requires only 15 minutes of work per day.

Another red flag is how he bashes other “fake gurus”. He claims that the system is unlike anything you have ever seen and that he is different from all the other gurus out there. However, he never offers any good explanation as to why this is true. As far as I see, he is just another fake guru selling a fake scam product that isn’t going to make anyone any money.

John Harris claims that he used to be broke and “on the brink of suicide”, having got laid off from his job and not having much money, but then somehow became some mastermind in e-commerce and was the “go to guy” in online forums when it came to e-commerce related questions.

After big investments and lots of testing, he supposedly created this “Ecom profit system” that can make anyone money. However, is any of this true?

The answer is more than likely NOT.

After doing a little digging around I found that this “John Harris” guy probably doesn’t even exist. The picture that is shown of him below the video presentation is actually a stock photo that is available for purchase online… 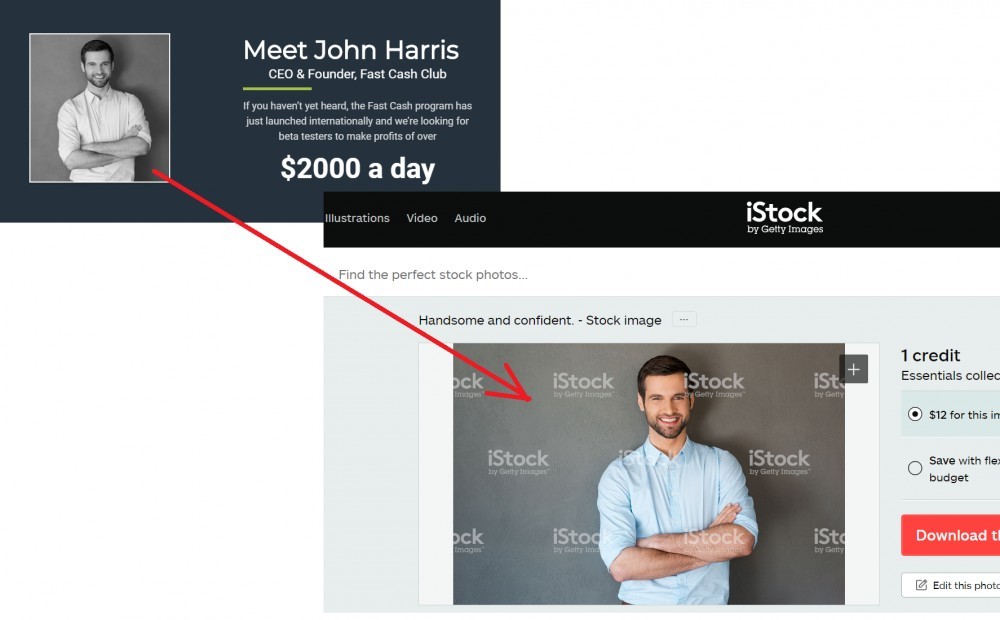 So since the photo is a known fake, can you really trust anything he says? Half of the video presentation talks about how he is different from other fake gurus and how you can trust him, but it seems that there is absolutely no reason to trust him.

He is more than likely completely made up. I see this type of thing all the time when it comes to online scams. Of course the real people behind these fake systems do not want their names known. So the easiest thing to do is to make up some fictitious character and promote the system under fake names.

#5 – The Testimonials Are Fake

And as we already know, the testimonials are fake. I already showed you the one guy, who was a paid actor on Fiverr, above. In there is more where that came from.

Later in the video presentation there are other testimonials shown, which also happened to be from paid actors/actresses on Fiverr. One example is this woman… Who claims to be making thousands of day with this Fast Cash Club system… 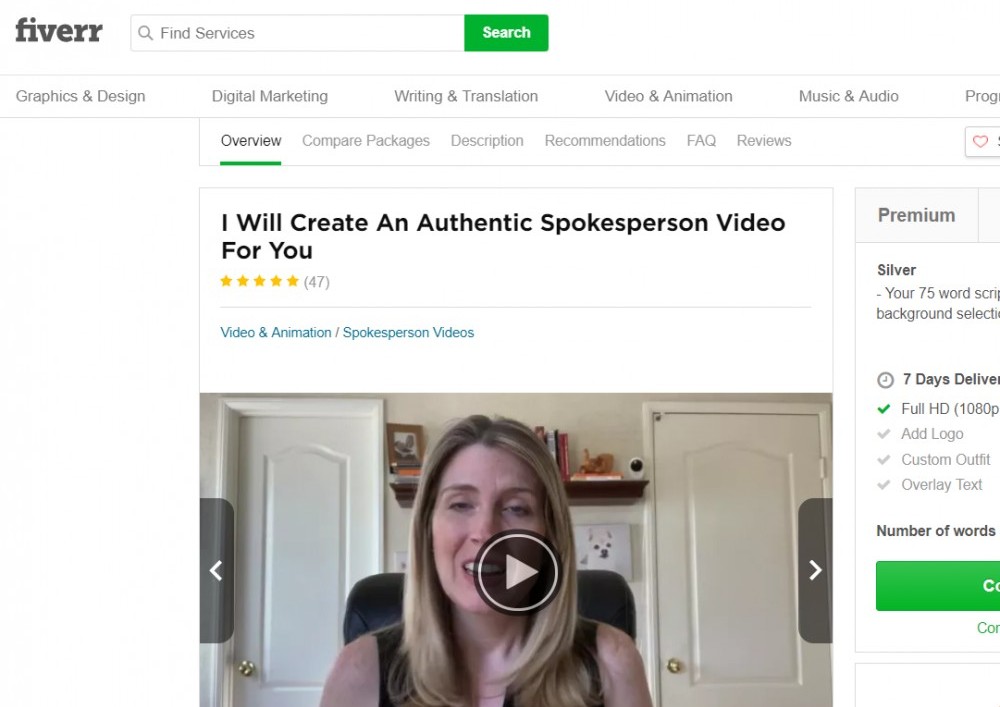 And the last red flag that I’m going to go over is the disclaimer, which I always suggest reading before buying into any sort of “make money online” product. In this case, the disclaimer is somewhat contradictory to what you are told in the video presentation.

HOWEVER, if you read the disclaimer it clearly states that “there is no guarantee that you will earn any money using the techniques and ideas in this product”…

“John Harris” tells you that the system is all about Shopify and talks about how Shopify is booming in making tons of money online, but unfortunately he never actually explains how the system works. All he really tells you is that this system is easy to follow and all you have to do is follow his lead and “watch the money come flooding into your account”.

What the heck is that supposed to mean? What type of an explanation is that? How are you actually going to make money with this system?

These are all questions that should be answered, but are not… And this is another major red flag and a common sign of a scam. Often times scams will lure people in with talk about making tons of easy money online, but never provide any details on how they actually work. Of course you have to buy into the system before finding out that it was all a scam.

I was actually involved in e-commerce and had my own Shopify store a couple years ago so I have some experience with this business model. Making money online via e-commerce with Shopify stores is definitely something that can be very profitable, but there is a heck of a lot to it and I certainly would not trust a shady system like this provide me with training.

So buy into this if you wish to, but this is definitely not something that I’m going to be recommending by any means.

If you are a beginner looking to make money online then I would suggest taking a look at how I went from $0 to over $6000 per month working online. What I do could be described as “beginner friendly” and you can click the button below to see exactly what I do, how it all works, and how beginners can get started doing the same.

Questions or comments? Just leave them below in the comment section and I’ll get back to you as soon as I can 🙂