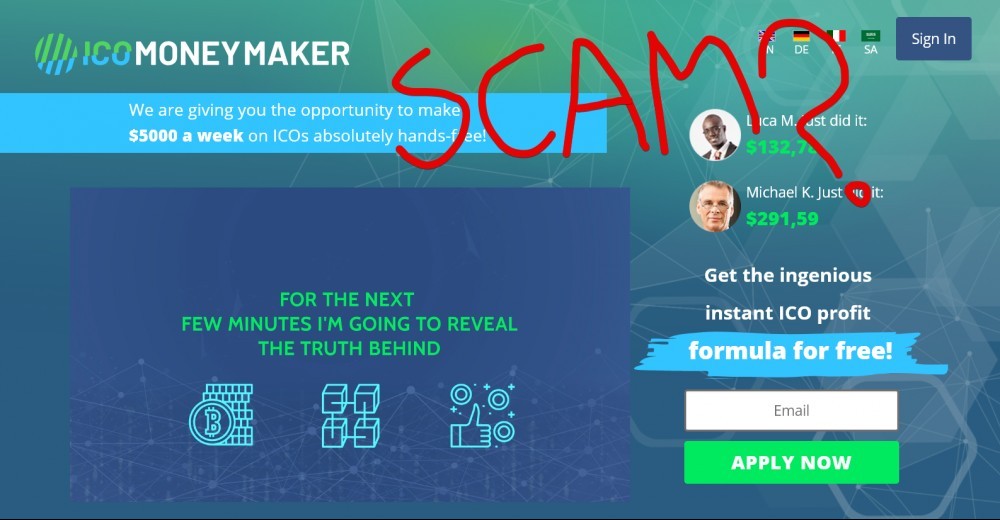 ICO Money Maker is supposedly an incredible opportunity to make up to $5000 per week “hands-free”. But is it really? I have seen many similar softwares like this before that claim to run on complete autopilot and make you thousands of dollars but they usually turn out to be nasty scams. So is this the real deal or is ICO Money Maker just another stupid scam that is going to leave you with less money than when you started?

The truth is that this place is not what it is claimed to be. It is not the incredible software that is going to make you thousands of dollars without you doing any work. If you were thinking about buying into this you are going to want to take the time to read over my review and hear what I have to say. In short… Yes this place is a scam and I’ll be showing you why and how they scam you.

When you land on the website for ICO Money Maker you are greeted with a video presentation that starts out with the spokesperson, who you later find out is named Tony Shaffer, telling you that you have been “chosen” to access this video as if you have been carefully hand selected to test out this software.

He tells you that he is going to show you the truth behind bitcoin and other cryptocurrencies, in particular ICO’s. One of the more bold claims that he makes is that this is “guaranteed to make you more money this year than you have in the past five years”…

But this is all a bunch of BS. Just think about it… How would a statement like this ever be accurate? This guy has no idea how much you make in the first place. At this point is is already really sounding like a scam, similar to Crypto Coin Sniper and Crypto Cash for Beginners.

But anyways… In the video presentation he goes on to show some charts of cryptocurrencies that have skyrocketed in price. He shows some that have increased by over 100,000% within one year and tells you that you can turn one dollar into $100,000 just like that… Super simple.

Supposedly this Tony Shaffer guy is a mathematician, programmer, hacker, and business owner. He says he along with a team developed some complex algorithm for this ICO Money Maker that trades at 97% accuracy. But of course this isn’t enough for him… He is looking to improve this and wants to put together a focus group to test it out, and of course you are one of the lucky picks.

At first he tells you that the software exploits the blockchain technology and rakes in tons of money on autopilot. But of course this tells you absolutely nothing… Is just a bunch of very vague claims that doesn’t really tell you much of anything.

He then goes on to explain how it is all about ICO’s, which are called initial coin offerings. You see.. Every cryptocurrency, well most of them, start out at an ICO stage. This is when the cryptocurrency project is looking for funding for the project and allows initial investors to buy tokens. The tokens are purchased for very low prices and the people buying in are doing so with the hopes and dreams of the price skyrocketing later on so that they become rich.

There or lots of cryptocurrencies out there that are worth thousands of times more than they were in the ICO stage. So if you would have gotten an early, you would be very wealthy.

But anyways… He says that this software automatically buys and sells ICO tokens. It monitors thousands of ICO’s and buys and sells with 97% accuracy… All on complete autopilot of course.

However… This is all complete be asked and I’ll explain why it makes no sense at all.

The software is supposedly all about ICO’s, in particular, it is about trading ICO’s… Buying them at very low prices and selling them at much higher prices. All sounds good, right?

Well what doesn’t make sense here is this: ICO’s aren’t available for trading yet. When cryptocurrencies are in the ICO stage you can’t buy and sell them whenever you want… It doesn’t work like that. You can buy them in the ICO stage but in order to sell them you will have to wait for them to hit cryptocurrency exchanges, such as Binance, Bittrex, KuCoin, etc. and guess what? This could take months.

This software is supposedly buying and selling these ICO’s in short periods of time… Which makes no sense. And of course he offers no explanation on how it is actually doing this. The reason for this is because there is no explanation… It simply cannot happen like he tells you.

The fact of the matter is that this ICO Money Maker place is full of lies. Pretty much everything they tell you is a lie.

If you look below the video presentation you will see a bunch of cryptocurrency exchange and cryptocurrency news outlet logos. They tell you that all of these places are partners with ICO Money Maker however this is not true at all. I could find absolutely no information whatsoever on any such partnerships and I can’t imagine any of these exchanges/news outlets ever partnering with a scam like this.

Tony Shaffer Is Likely a Fake

“Tony Shaffer”, as mentioned, is the guy that supposedly created the software. However, he is likely a complete fake. There was no information provided that I was able to verify for proof that this guy actually exists. As far as I am concerned, he is a fictitious character that was created just to promote this scam.

I see this sort of thing happening all the time with many other scams, so it is nothing that is out of the question. The real scammers behind this scam don’t want their names known so they create some character instead.

I have reviewed many automated cryptocurrency trading scams before and this has a lot of the common characteristics that I often see. I am talking about things like ridiculous income claims, no good explanation on how the software actually works, fake characters, and of course… What I will discuss below… How they actually scam you.

If you want, you can read my post about  spotting cryptocurrency scams for more information.

You might be wondering how this place can possibly be a scam if it is free. The software is free to use so how are they going to scam you out of your money? Well if you noticed, the guy tells you that all you have to do is fund your account to get the software going in making profitable trades for you.

This is how they scam you… When you fund your account. What happens is you will be directed to deposit your money with a completely unregulated broker and the scammers behind ICO Money Maker will receive a commission for referring you there. This is how they get you. Once that money is deposited you likely will never see it again. Inside your trading account for ICO Money Maker they may make it appear as if you are actually making money, but when you go to try to withdraw that money you are in for a rude awakening.

When I begin to review an opportunity like this I try to go in with somewhat of an open mind. I was pretty sure right off the bat that this was going to be a definite scam, but I still gave a chance and looked into it for any reason to be proven otherwise. All that I found was many more reasons that this is a scam. Everything that I see about this place points to it being such and because of this there is definitely no way I will recommend anyone buy into this… Of course unless you want to be scammed.

With the rising popularity of cryptocurrency there are a lot of these little cryptocurrency scams popping up everywhere so you really have to be careful. This is just one of many and there are definitely going to be many more to come. Proceed with caution when you come across something like this and always do your research before buying in or not.

Anyways… I hope you enjoyed my review here and found it helpful. Please leave any questions or comments below and I’ll get back to you as soon as I can 🙂

Also, if you’re looking to make money online as a beginner and don’t know where to get started, check out how I went from $0 to over $6,000 dollars per month working online.