Will Insider Profit Groups Scam You? – EXPOSED In This Review

I’m guessing you probably came across some email in your inbox talking about this great new money making method, it had a few links and you clicked on one that then led you to the video presentation for this opportunity. You probably thought it sounds a little bit too good to be true, so you decided to do some extra research into it, which then led you to my review here.

And it’s a good thing that you took the time to do more research, because this product is not what it seems to be.

Yes, it does present a real opportunity to make money online, and money definitely can be made, but is not nearly as easy as you are led to believe and might be a big disappointment.

The spokesman in the video talks about how jobs are being slashed all ever, these are extremely hard times, and even how he used to be a baker but ended up losing his job, his home, and really struggling.

Then… Of course… He talks about how this is the “biggest opportunity the Internet has ever seen” and how you are going to be able to get in on it here today. This type of statement sounds a bit reminiscent of scams I’ve reviewed in the recent past, such as The Silk Road Effect and The Ecom Freedom Blueprint.

This it’s pretty typical fear mongering right here. Yes, these are “hard times” and a lot of jobs are being lost, but is Insider Profit Groups really the solution? Well of course that is what he wants you to believe because he is trying to sell it to you, but it probably isn’t.

But anyways… Enough talk about the misleading sales pitch he throws at you. Let’s get into the review…

Insider Profit Groups is all about making money via Facebook groups. This is the new awesome opportunity that he is talking about. He claims that he has a Facebook group with over 20,000 members that is making him $1175 a day… 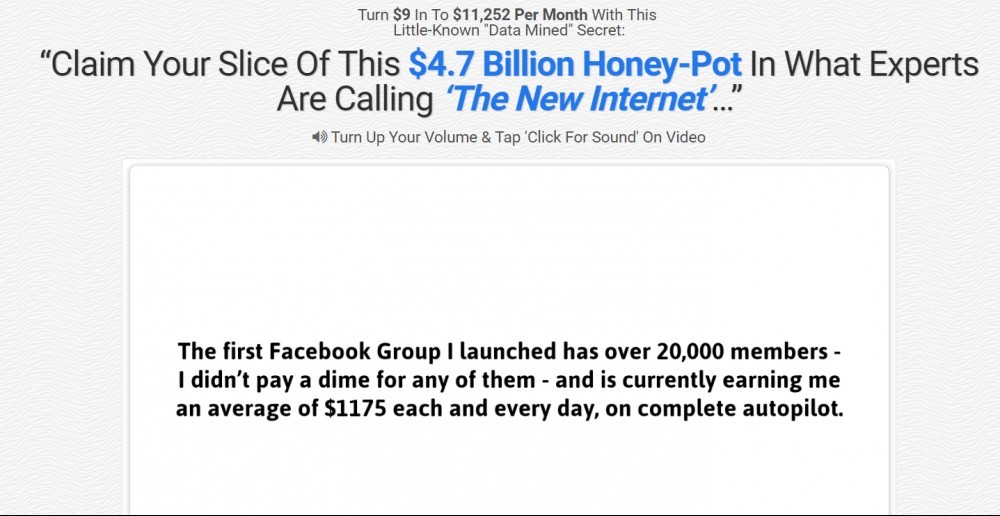 … But of course there is absolutely no way to prove what he is telling you is true.

And besides, this is definitely not some new opportunity that is just now being brought to light. People have been making money via Facebook groups for years.

Facebook groups are private communities within Facebook that anyone can create for free. You could create a private group about cats, cool shoes, shooting bows, politics, stopping deforestation, and literally anything you want to.

Then, you will be able to monetize these groups by promoting relevant products to them. So for example if you have a group about cats, you can promote cat toys to the group via affiliate links.

You will be able to earn money through affiliate marketing. This is when you promote products, other people’s products, and earn commissions when you help make sales. It is a completely legitimate business model and actually one that I have years of experience in.

Sounds good… But don’t buy in just yet. You might not want to.

What You Get If You Buy

He talks a big talk, and acts like if you buy in your going to be able to make “$2563 a day” like he is, but the reality is much different.

What you are getting here is not some in-depth video tutorial course that is going to hold your hand through the entire process and really help you get things going.

Instead, you will be getting an e-book that outlines the process of how this all works and how you can do it. Yes, an e-book. This is why this product is being sold for only $9.

He calls this “the world’s first and only Facebook profit group blueprint for complete beginners”, but this is far from the truth. In fact, while this e-book does provide good information and lays it out for you in an easy-to-follow way, all this information can definitely be found for free online. And I’m sure many people reading this would rather watch a YouTube video explaining the process then read an e-book.

The Reality of This

This is promoted in a way that is definitely a bit misleading. The guy claims to have stumbled across some “special tool” that big companies in Silicon Valley are using to spy on different methods of making money online, which he then used to come across this method he is teaching in his e-book. He makes it sound as if you came across this method, and then BOOM… Now he’s making thousands of dollars every day.

But the reality is much different. This will certainly take time.

You can’t just go out and create a bunch of Facebook groups thinking that they are going to grow in immense following overnight. This takes a lot of time and effort.

First you have to provide value in your Facebook group. This is what will attract new members and keep them around. You can’t just expect a bunch of people to join your group and then promote product after product, milking them for every penny they have. This does not work out and if you do it you’ll just end up with a bunch of people leaving the group and absolutely no trust.

You have to be active within the group and become an authority figure that people trust. This means posting valuable content regularly, answering questions, commenting on things and so on.

He somewhat leads you to believe you’re going to be able to get group members with little to no effort and then be able to milk them like cattle, but this is far from the reality.

I wouldn’t call the product a scam, because it does provide some value and is only being sold for $9, which I think is fair, but I will definitely say that the marketing around this all is without a doubt misleading.

So people who buy into this thinking that they are going to be able to make money in no time are likely going to feel scammed by the whole thing. This guy gives you unrealistic expectations and because of that there’s going to be great disappointment.

But overall the method of which he is talking about for making money online is completely legitimate. There are definitely some downsides, such as the fact that you have no real control over your group and are completely reliant on Facebook, but it is something that money can be made with online.

I actually do affiliate marketing for a living, and have been since 2015. However, I did not do affiliate marketing on Facebook. Rather, I create my own websites which has a lot of perks to it, because of course you have full control over them. I think this method is a lot better because of that and if interested, you can read my guide I wrote here for information on how to do the same. My guide is free by the way.