Is AZ Formula a Scam? – It Sure Is and I’ll Show You Why

The AZ Formula is said to be some incredible automated profit system that ordinary people are making $10,000 per week with… But is it really? Is it really this super easy system that you can tap into and start earning tons of money with in very short periods of time? Or is AZ Formula just another scam that suckers people and with lies of being able to get-rich-quick?

If you are suspicious of the claims made on the sales page for AZ Formula then you are not alone. You should be suspicious when you hear of programs/systems like this that are claimed to be super easy and can make you tons of money. Typically these sort of over-hyped programs turn out to be massive scams. As a general rule of thumb, if something sounds too good to be true then it probably is. This old wise saying really fits this particular situation.

I looked into the AZ Formula and you might be surprised with what I found… Well, maybe not. As suspected, this program is indeed a scam and in this review I will be going over why I came to this conclusion.

The AZ Formula is supposedly some “done for you affiliate profit system” that ordinary people are making thousands of dollars per day with. The system was created by guy named “Steven Cook” and this guy calls it his “one click profit system.

It is supposedly one of the systems where you just plug in and start making tons of money… Or at least that is what you are led to believe.

However, you are right to be suspicious of it all because this is more than likely a scam. Below I’ll go over some signs that this is a scam which caught my attention. They sucker people in with lies and very misleading information.

Signs That This Is a Scam

Just about every scam out there says something along these lines. They want you to believe that their system/program is some great new invention that you need to buy into immediately… Which is never the case. Just some sleazy marketing tactics, that’s all.

No… Not the type of fake news that you are thinking of, different type fake news.

You may or may not have noticed, but below the video presentation or a bunch of different logos for big media companies, such as Forbes, Business Insider, Yahoo, CNBC, etc. The purpose of these logos being pasted on the sales page is to get visitors to believe that this program has been featured on all of these different large media outlets. HOWEVER, this program definitely has not and never will be.

You can go to any of these different media sites and run a search for “AZ Formula”. You will not find anything related to this.

This is actually something else that is a very common sign of a scam. I have reviewed many scams that paste news logos on their sales pages to try to come off as more credible and more legitimate. My Home Success Plan, Amazon Cash Websites… they all do this crap.

Would you believe me if I said that this “Steven Cook” guy was fake?

Well would you believe me now that you can see his picture is completely fake, as you can see below…? 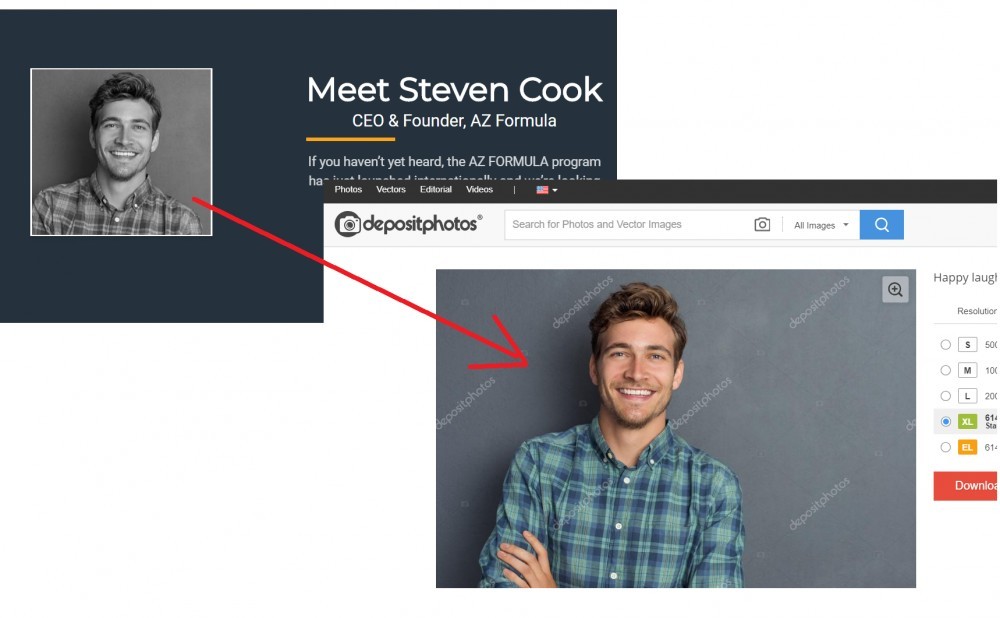 This Steven Cook guy’s photo is really just a stock photo that anyone can purchase and use as they wish online. I found this out by saving the picture that was displayed on the sales page and running a reverse Google image search, which led me to the stock photo.

This is yet another very common sign of a scam. Of course the real creator behind this scam program does not want his/her name known. I mean why would they? After all… They are scamming people and those who do buy into this program are going to more than likely be very upset

Using a fake name like this protects the scammer from the backlash that they would likely receive had they used their name.

Testimonials can be very convincing. Before buying into any programs/products like this, it is always nice to hear from people who have actually used the program/product.

In this case there was a woman who claims to have been using AZ Formula for two weeks and has supposedly made over $11,000 in profit with it. Sounds incredible… HOWEVER… Unfortunately this testimonial is completely fake and this woman has never used this program.

As you can see below, the woman in this testimonial video is a paid actress that is simply saying what she is getting paid to say. Below I took screenshots of her from the video presentation as well as one of her gigs on the freelance marketplace Fiverr, which is where the scammers hired her to create this video… 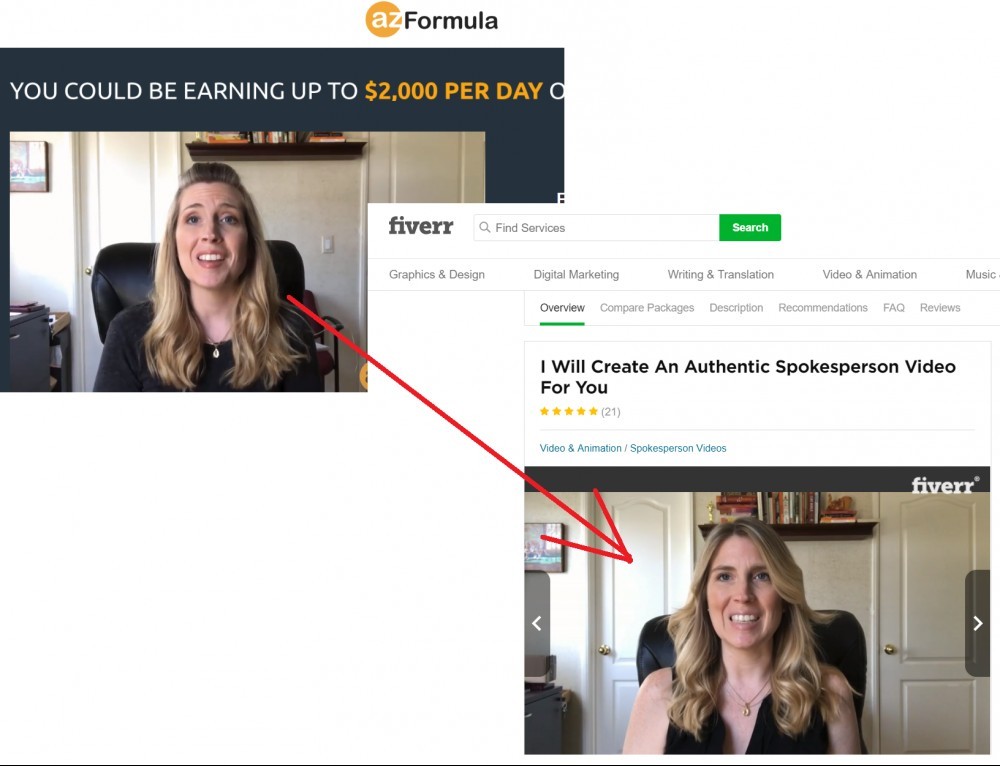 Another big red flag is that this program doesn’t really make sense… Well at least the video presentation for it does not.

In the beginning of the video presentation you are told that this is some “done for you affiliate profit system” but then throughout the video they talk about this being about e-commerce and the whole thing seems to be focused around selling products on Amazon… Which would mean this would have nothing to do with affiliate marketing. 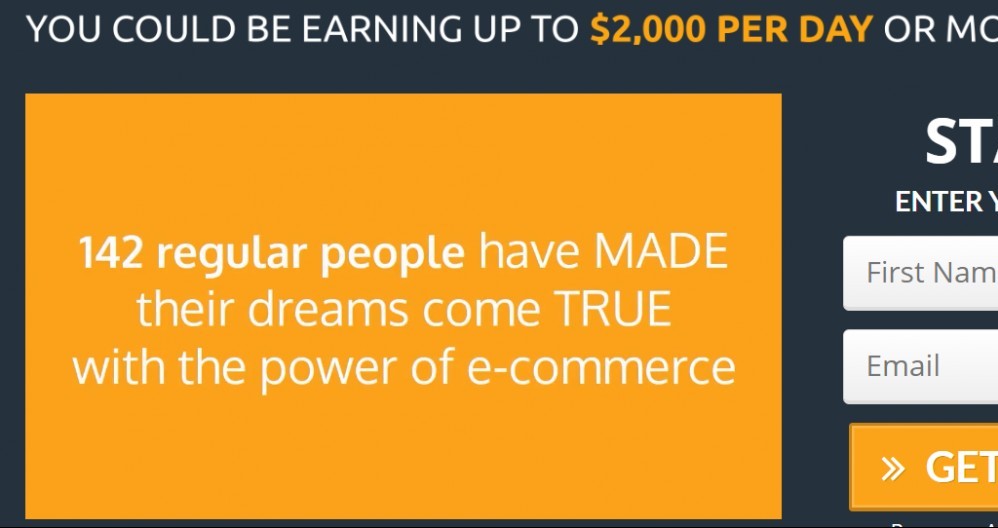 Not making sense is another common sign of a scam. Scams often are way over-hyped and many times tend to get caught up in the misleading information and lies that are given out. This is just one of those cases.

Well… First of all, this program of course is not going to make you $10,000 per week. And second of all, it is not just $37. $37 is just the upfront cost. After buying in you will be pushed to buy into 2 up sells which include:

Why People Are Claiming This Program Is So Great

So you may be wondering, well why is this program being promoted so much? Why are people claiming that this is so great and I am saying that it is a scam?

The reason for this is simple… The people promoting this are making money. This AZ Formula program is listed on multiple different affiliate offer websites and is giving people 75% commissions.

You have to be careful when it comes to online products. Now there is nothing wrong with affiliate marketing, and earning commissions from promoting products online, it is just that when it is done in an unethical and deceitful way, such as this, then it is wrong.

Okay… So let me summarize this whole thing:

AZ Formula claims to be some program that uses some secret formula no one has ever seen before that is making people $10,000 per week with the click of a button. That said, the man behind the whole thing, Steven Cook, is a fake so how can you possibly trust anything that he is saying? On top of that the video testimonial in the video presentation is fake and the people behind this paid the actress to create it. And on top of that they push you into higher priced up sells that you are unaware of when you originally buy in for $37.

Just think about that for second… How can you possibly trust this place?

Well… AZ Formula is undoubtedly a scam, and a very similar one to The AZ Code. As a full disclosure, I have not actually purchased this program, nor do I intend to. I have however reviewed hundreds of different online scams and know what to look for when it comes to the sort of things.

AZ Formula has all the makings of a scam. Right off the bat I suspected that it was a scam due to the ridiculous income claims and throughout my research I was convinced more and more that this is indeed a scam. Everything about this place points to it being another typical get-rich-quick scheme that is only going to lead to people losing money quick, not making it.

So anyways… I obviously am not going to recommend this program to anyone. If you are looking to make money online and don’t really know where to start, I would suggest taking a look at my #1 pick here. This is where I got started back in 2015 when I first started looking for ways to make money online.

Questions or comments? Please leave them below in the comment section and I will get back to you as soon as I can 🙂