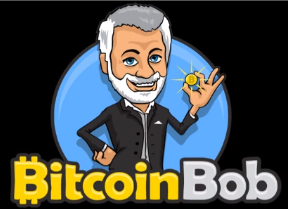 Is Bitcoin Bob a Scam? – I’d Avoid This One

There is a program going around called Bitcoin Bob that is claimed to be a mastermind group created by a guy named Bob that helps regular people cash in on Bitcoin and make a ton of money. But is this too good to be true? Should you trust this place? Is the advice given even any good? Is Bitcoin Bob a scam program that will just leave you with less money than when you started? These are all questions that are important to answer before moving forward.

In this review I’m going to be giving my opinion on it all. I am not promoting this program and I would actually advise to avoid it. You will see why I’m saying this as you read on.

Bitcoin Bob is a simple 3 step “system” that will supposedly help you make money with bitcoin. It claims to contain “100%” free training & information along with your own personal coach that will help you get everything going.

Seems a bit fishy doesn’t it? How are they going to give you your own coach if you aren’t even paying? Well the truth is that your “coach” isn’t really as you are led to believe. The coach’s name is Phillip and he is just the guy that made the short training videos…. not really a coach in my opinion.

Overall the system is very easy to go through and there is no doubt that you can make money with it. However, there is one serious flaw which is the reason I am saying avoid it. This flaw will ultimately lead to most people losing money instead of making money as far as I see.

I’ll go over each step of the system so you see what I mean. 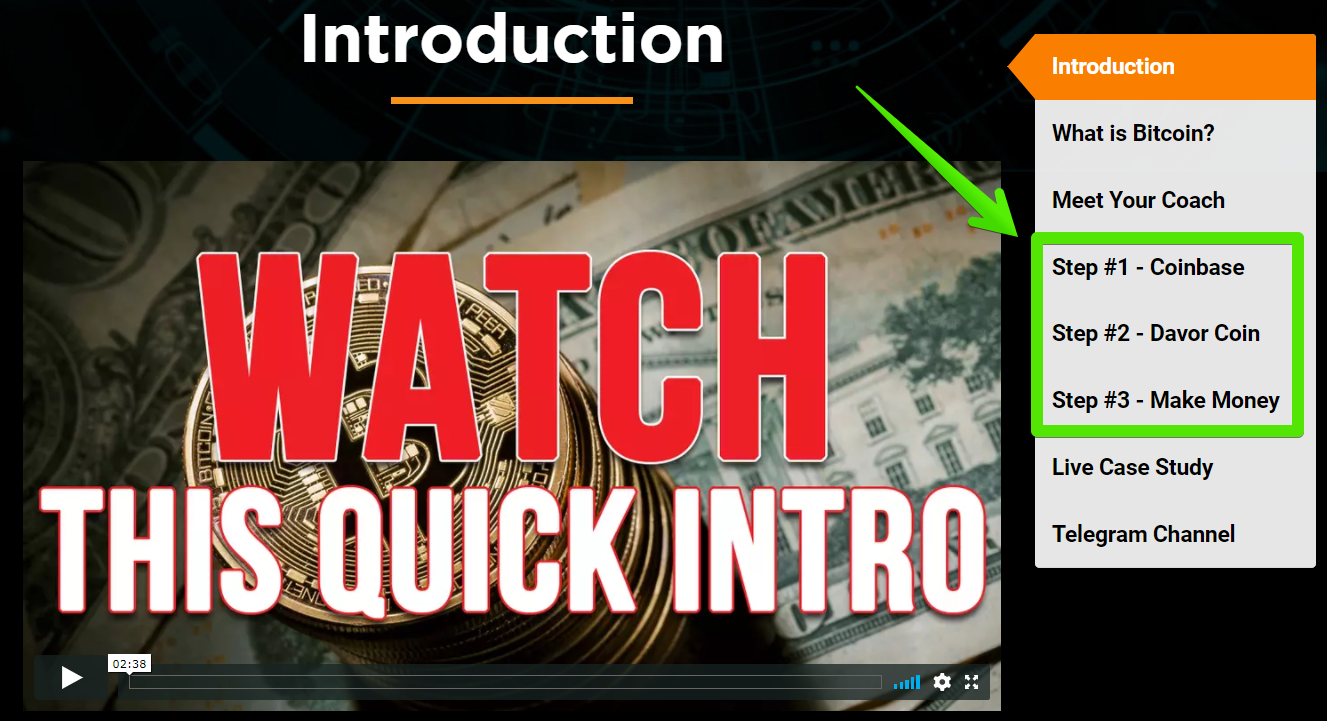 This step is going to show you how to purchase Bitcoin and I have nothing against this first step. Coinbase is one of the most trusted exchanges out there and it is where most newbies buy their first bitcoin from due to its simplicity and safety.

I have used Coinbase quite a bit early on however I longer do anymore due to the fees. GDAX, which is another exchange owned by Coinbase, provides the same amount of security but charges pretty much zero fees. This is their more professional cryptocurrency exchange.

But anyways… in this step you are going to have to purchase bitcoin from Coinbase. You will be able to do so with your credit/debit card, bank account, or even with a wire transfer.

This is the “fatal flaw” of this system. In this step of the process you are going to be signing up with Davor and sending your bitcoin over to the platform.

Davor is a cryptocurrency lending platform and this is how it works: You buy Davor Coin and you then “lend” your Davor Coin back to the platform. They then take the money you just lent back to them and invest it in new ICO’s (initial coin offerings) and capitalize on price differences on exchanges through crypto arbitrage trading.

You then will be able to make an average interest rate of 1-2% per day doing this, which equals out to about 48% a month (so they say).

This sounds awesome and all but I’ll go over why I’m really negative on all of this in the next section.

In this step you will just learn how to use the lending platform on Davor.

My Problem With This

Ok, so after you buy Davor Coin and then lend it back to them, they claim to invest that in new ICO’s or do arbitrage trading, either way making money with it. Then they pay out their members with the earnings that they claim to make doing this.

My problem is that they give no evidence of any of this being true. When you lend your Davor Coin back to them you don’t know what the heck they are doing with it. They don’t show you trades they are making or the ICO’s they are supposedly investing in.

This all reminds me too much of the infamous Bitconnect and BitconnectX scam. If you are unfamiliar with Bitconnect… basically it was a nearly identical lending platform that imploded and people lost tons of money. At its peak it was valued at over $2.5 billion and then crashed hard to under $100 million. Some of the more heavy investors in this platform lost hundreds of thousands of dollars and there are lawsuits going around like crazy.

Bitconnect was more than likely a massive Ponzi scheme that wasn’t doing what it said it was. The money coming in from new investors was being used to pay off the older investors (highly likely). There are a lot of furious people over this but the problem is that no on knows the people behind it.

A Look at The Creators of Davor

Oh no…. there is no information about the creators of Davor either. This is a major problem because its impossible to know whether or not you can trust this place.

If you want to read my review on Davor Coin you can do so. I go over a little more in detail about all of this.

This is the reason that “Bitcoin Bob” is providing this free training. Because when he gets people to join Davor and invest money… he gets paid.

In the Davor compensation plan you can earn down to 6 levels beneath you.

Is The Risk Worth It?

Ok so lets go over the 2 main scenarios that I see happening here:

Scenario 1 is that Davor is completely legit and that you make a ton of money. Everything is awesome and you strike it rich.

This is highly unlikely because the creators are hiding their faces and because some things on their website make absolutely no sense. Take for example this… I don’t expect everyone to catch this but the problem with the statement made on their website makes no sense. They claim to use blockchain technology but then go on to talk about how you can store your coins on your computer drive, smartphone, etc. 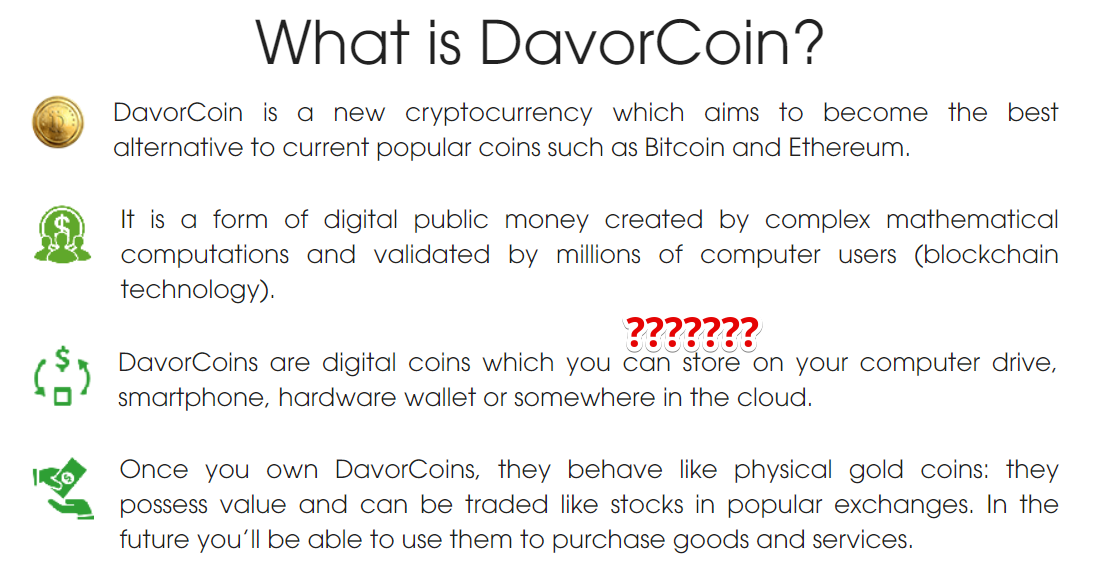 The reason this makes no sense is because with blockchain tech your coins are not stored in any single location. They are stored all over the world due to the decentralized aspect of it all, which I’m not going to get into.

In this scenario Davor turns out to be a big Ponzi scheme (highly likely) and you end up losing your money. When the rate of new investors begins to slow and the money isn’t coming in quite as fast these schemes collapse.

Ponzi’s are doomed from the start and are completely unsustainable. They provide no value and only rely on new investments. They are guaranteed to collapse.

But Can You Make Money?

You can definitely make money with Ponzi schemes. Early investors make a killing if the scheme is good. The problem is that you never know when it might collapse.

In ponzi’s the majority of people involved lose money. That is because there are always more people on the bottom of the pyramid than the top. This is something else that is guaranteed in Ponzi’s.

Honestly I think you would have to be crazy to invest in this right now, especially with what happened to Bitconnect. Everything about Davor reminds me of Bitconnect. When I come across a platform like this I am always skeptical that its a scam and look for ways to be proven wrong. In this case there is nothing about Davor that proves my assumption wrong. There is no proof of their operations being as they say and as far as I see this is a very untrustworthy Ponzi scheme.

You can invest if you want to just be really careful and don’t invest more than you can afford to lose.

Also, I suggest reading over my post on 10 ways to spot a cryptocurrency scam. Davor has quite a few of the characteristics described here.

On a different note, you can check out one of my top picks for making money online here. This has nothing to do with cryptocurrencies but I find that many people looking into opportunities like this Bitcoin Bob thing are just looking to make money online. I’ve been doing this since 2015 and make very good money with it. You can learn more here.