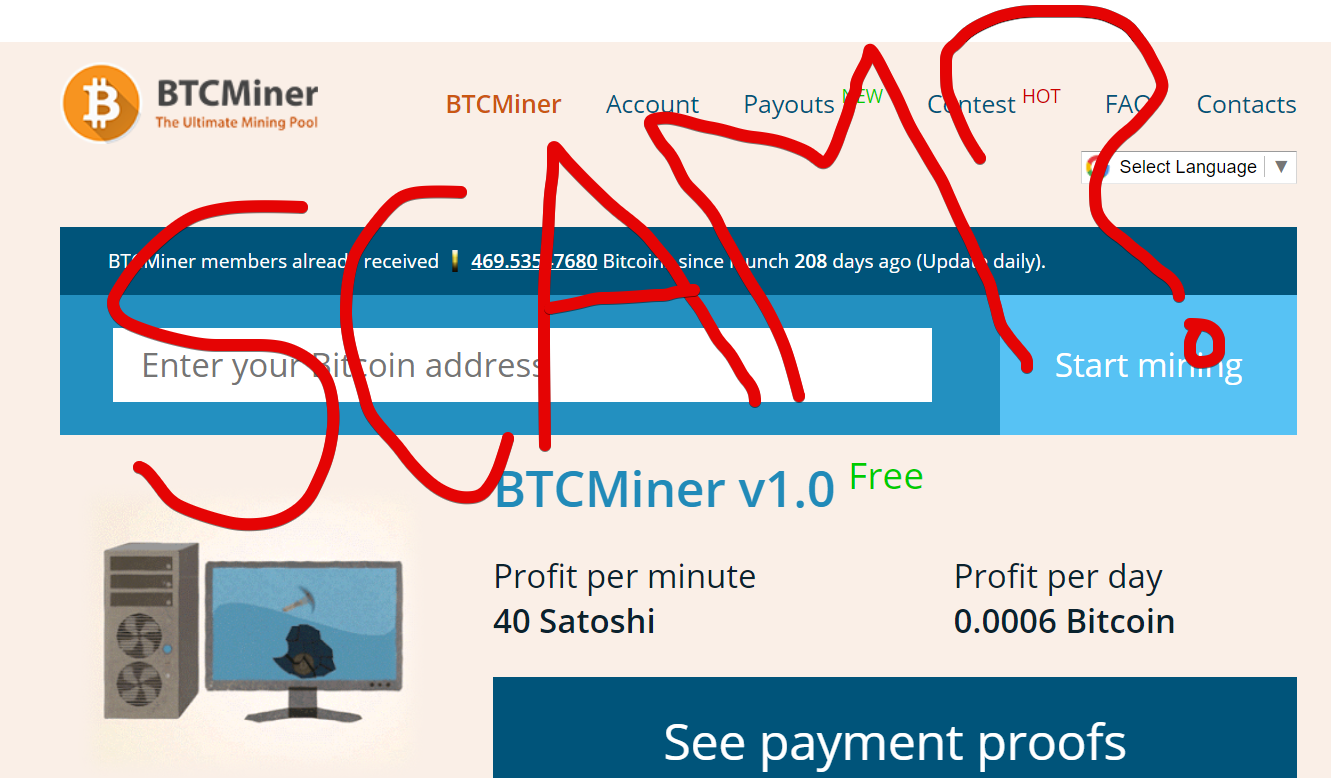 If you are looking to invest in BTCMiner (at btcminer.me) then I highly suggest you read this first. Why? Well because this places is more than likely not what it claims to be. There are lots of complaints and many red flags. Is BTCMiner a scam? You can decide for yourself after reading.

In this review I’ll be going over what BTCMiner claims to be, how you supposedly make money, some serious concerns I have, some of the common complaints I’ve found online and more.

BTCMiner claims to be a mining pool in which anyone can participate and earn bitcoin from their mining operations. Its kind of like a more rundown version of HashFlare if you have ever heard of them.

Mining pools are basically groups of investors that come together and put money into mining equipment then share the profits from the entire operation based on how much they invested. The reason mining pools exist is because mining bitcoin these days is extremely expensive and not many people can afford to do it on their own.

There are legitimate mining pool operations going on out there but there are a lot of mining pool scams as well. This is what you have to be careful with.

Near the end of this review I’ll be going over some concerns I have with BTCMiner and why I think it very well might be a scam rather than legit. First I’m going to go over the payment plans though.

Like I said, you invest money to make money. When you invest you are investing in the mining operation costs and by doing so you are getting a piece of the profit.

As you can see you can invest anywhere from 0.001 to 0.5 bitcoin to get started and you can supposedly earn up to 1 whole bitcoin per day if you invest in the highest investment plan.

But I have one question here…

How Can You Possibly Make This Much? 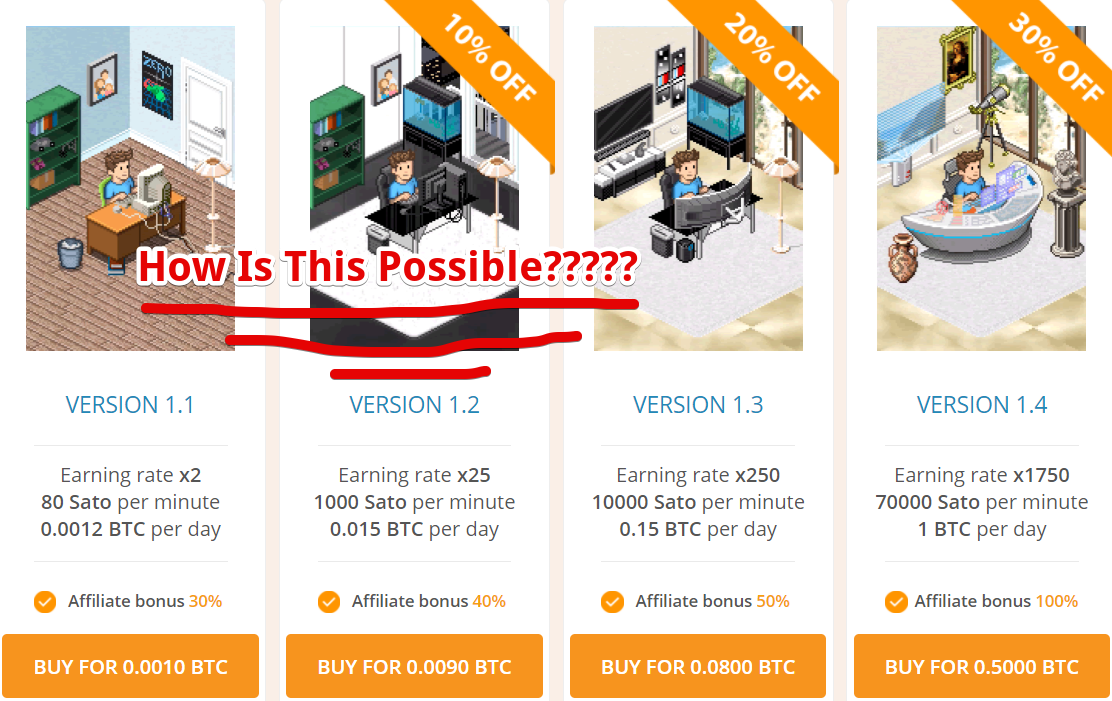 Lets just think about the version 1.4 plan for a second. They claim that you can buy this plan for 0.5 BTC and that you will earn 1 bitcoin per day. That is insane… Literally in just one day they are telling you that you can double your bitcoin.

This is a major red-flag and seriously unrealistic. I know bitcoin mining can be profitable but it isn’t this profitable. Doubling your money in a single day??? Come on now. This is absurd and in no way possible.

Concerns About This Place

Besides the income claims being massively unrealistic, there are a few other things that I want to point out about BTCMiner.com that leads me to believe its nothing more than a scam.

For one, they don’t show you any proof of what is really going on here. For legitimate mining operations you will see lots of information about the actual operation. They will show you pictures and provide details about where their mining equipment is located, they will keep you updated on the status of whats going on, etc. Here they do not do any of this.

You are supposedly investing in this mining operation but have no idea where its located, what it looks like, who is running it? You don’t know anything because they don’t tell you anything.

Crypto mining pool scams are usually some type of Ponzi scheme. Why? Well because its easy to operate a ponzi under the cover of a mining pool. Its the perfect cover.

With ponzi’s there is no real value being provided. Instead of making a legitimate return on people’s investments the older investors are paid by the newcomers. These will work for a certain period of time but are doomed to collapse at some point once the amount of new investors coming in slows down.

There are rumors that BTCMiner might be a ponzi and I agree. It very likely could be one and probably is judging from the lack of information and transparency given.

It also really pushes members to recruit others to come invest in BTCMiner. They promise some pretty high referral bonuses this is something that yet again seems very unsustainable to me.

But they show payment proofs?

This doesn’t matter. Ponzi’s pay people too. Just because they are paying people doesn’t mean they aren’t a scam. They show payment proofs but they don’t show proof that this money is coming from the mining operations.

I’m not the only one that has negative views about this site. If you do some research you will find plenty of complaints. I for one have not actually invested bitcoin here but there are others that have and claim they have not received any payments… 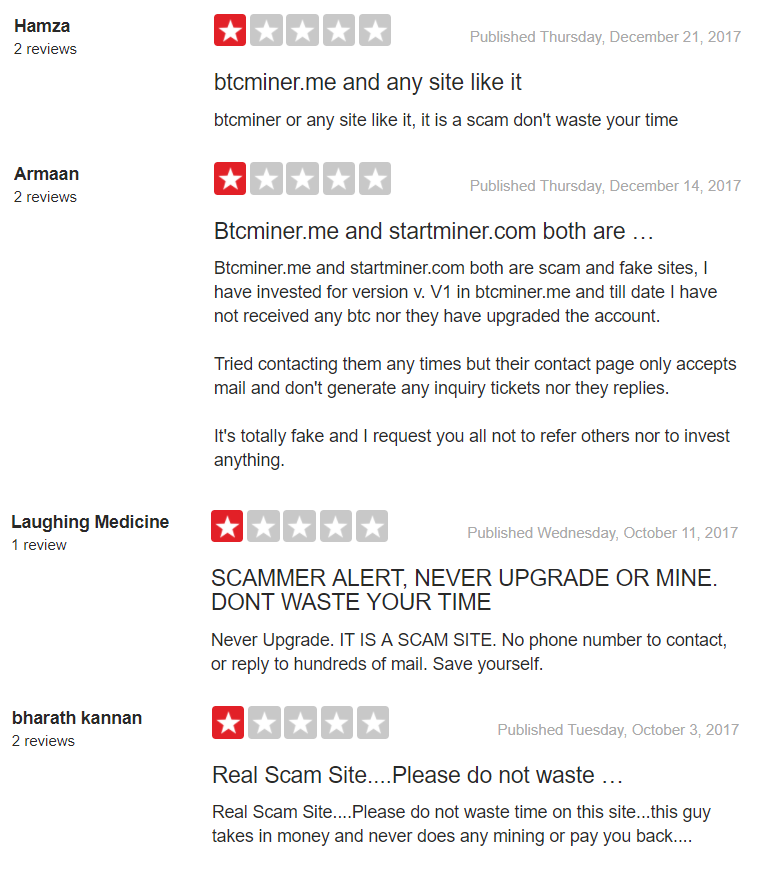 Conclusion on BTCMiner – Is There Any Chance You Will Make Money?

You might make money but I sure as heck wouldn’t count on it. Its either a pure scam where they don’t pay out at all or its a ponzi scheme type scam where they will pay out but it will eventually collapse. Either way its a terrible idea to invest in. There are a heck of a lot of scams in the crypto space and this place has many of the common signs of scams that I see over an over again looking into opportunities like this.

As always I suggest doing your own research on things before putting money into them. I have provided a good bit here but if you are still interested in investing in BTCMiner I would definitely do more research because I really don’t recommend it and think you have a good chance at losing money overall.

On a completely different note. If you are looking to make money online it is probably a good idea to not put all your eggs in one basket. I always recommend this program for newbies that are looking to make an online income. It has nothing to do with cryptocurrency or anything but I just thought I’d mention it because I’ve been a members since 2015 and make some good money with it.