Is Crypto Coin Sniper a Scam? – Yup… You Will Want To Avoid This! 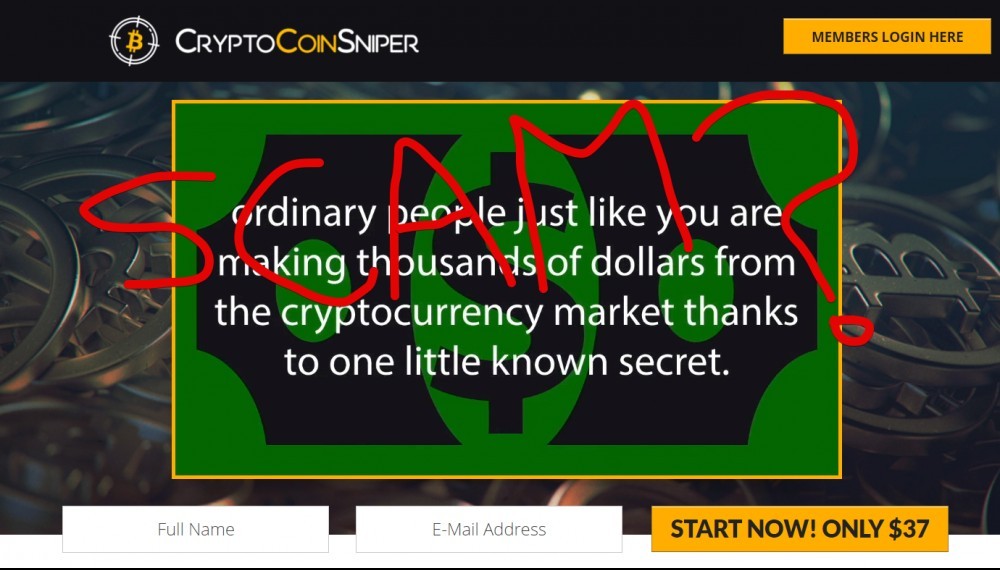 The Crypto Coin Sniper claims to be some amazing new trading software that can make you $3000 or more per day trading cryptocurrencies. But can it really? After all… People can tell you all the lies that they want to and just because you are told something online does not mean it is true. So is this the real deal or is Crypto Coin Sniper a scam that is just going to lead you into a hole?

In this review I’ll be going over what Crypto Coin Sniper it is and why I definitely do not recommend anyone buy into it. Anyone who buys into this is going to be seriously disappointed. You are just going to end up with less money than when you started and you will also have wasted time on this whole ordeal.

When you land on the Crypto Coin Sniper website you are greeted with a video presentation. It starts off with the spokesperson talking about how ordinary people like you are making thousands from a “little-known secret” in the cryptocurrency market.

He says that making thousands of dollars per day is perfectly normal when it comes to cryptocurrency and that with this “secret” you can make up to $20,000 in a single week…

So right off the bat things seem way too good to be true, don’t they? Making $20,000 in a single week!?? That is a heck of a lot of money to be making and if you really can make this much with this software then why is this guy selling it to other people? After all, when it comes to trading you don’t want a bunch of people making the same trades as you. That just makes it less profitable for you. It is really starting to sound like some other crypto scams I’ve reviewed such as One Bitcoin A Day and Bitcoin Focus Group.

But anyways… The spokesperson then goes on to show some screenshots from the cryptocurrency exchange Binance. He claims that he makes an average of $3,125.66 daily with this software and then goes on to tell you that this “top secret crypto trading software” can make you up to $3000 today…

And of course it does everything for you… It is completely automated. You can’t forget that. You can’t have a nice good old-fashioned get-rich-quick scheme without talking about how it is “100% automated”.

And don’t worry about having any experience or knowledge of anything. Luckily this is as easy as tying your shoelaces… Which is what the guy tells you LOL.

Oh weight… And also only takes 10 minutes of your time per day. Can’t forget that either. Anything more than 10 minutes per day would just be too darn much.

But but anyways… This is obviously a scam as I am sure you were at least suspicious of. After all… You did take the time to do a little bit of extra research and came across my review here which you are now reading. Below I’ll go over why this is a scam and why it is absolutely IMPOSSIBLE to work out like this guy tells you.

Like many online scams out there, the Crypto Coin Sniper features the typical fake video testimonials from people claiming they have tried out the software. These people are nothing more than paid actors that are saying what they have gotten paid to say.

You probably picked up on this when you sell a video. There’s just something about the videos that seem fake… They do not seem genuine by any means. 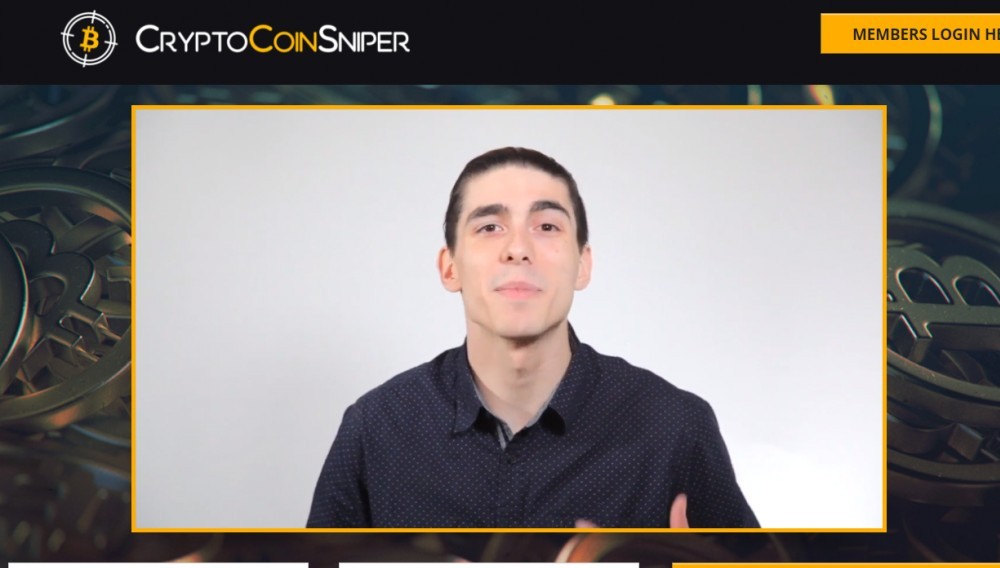 The man behind this all claims to be a guy named “Paul Scott”, who is supposedly from Philadelphia. However, there is no picture given of the sky and no information that allows me to do any research on him to see if he is really who he says he is.

For all I know this guy could be completely made up, fabricated just to help promote this scam. And actually this is what I think is going on here. I have reviewed so many scams like this with fictitious characters that were made up and this seems like just one of many.

Of course the real creators behind scams like this do not want their names to be known. They know that they are going to be making a bunch of people very angry and of course they do not want people coming after them.

If you are new to the world of cryptocurrency then the potential income figures that he gives you may seem realistic, but any experienced cryptocurrency trader/investor, or just anyone who has kept an eye on the market for a while will know that making the amount of money he claims is absolutely impossible.

He claims that you can make $3000 today from a $50 investment. Can you imagine how insane that would be? That would literally be a 6000% return within 24 hours.

These types of things don’t happen anymore, especially with the well-established and well-known cryptocurrencies, such as bitcoin and Ethereum. And based on my research this trading software tells you to place trades for the main large cryptocurrencies.

Now if you get into new and up-and-coming cryptocurrencies there is potential to make it very large profits very fast. But with the well-established ones this just isn’t going to happen. Bitcoin and Ethereum did not make anywhere even relatively close to 6000% jumps within a day. This is ludicrous and there is no way anyone is going to make these types of returns.

Not As Bad As Other Crypto Trading Scams But Still Bad

There are a heck of a lot of cryptocurrency trading software scams out there that I have reviewed. Luckily, this one isn’t nearly as bad as some of the others I have seen.

Some of the others out there will lure you in with the hopes and dreams of making tons of super easy money and will then direct you to some unregulated broker to deposit money into your trading account. What many people don’t know when it comes to trading cryptocurrency is that there is NO NEED FOR A BROKER. Legitimate trading softwares should be able to connect to your cryptocurrency exchange accounts via API.

Luckily, for Crypto Coin Sniper they do not refer you to some scam broker. Instead this software just tells you what trades to make it basically and then you have to go make them on your own. So it is not nearly as bad as some of the other scams out there, which I guess you could say is good.

Should You Buy Into This?

Well let’s think about this for a second.

First, the guy lies to you about being able to make $3000 in your first day with just a $50 investment. As I have explained above, this is absolutely impossible to do in the current cryptocurrency market and has been for years when it comes to the mainstream cryptocurrencies. Second, the guy who is telling you all of this is likely a made up fictitious character. There is absolutely no way to verify anything about him and based on what I have seen I am guessing he is a fake. Third, the people behind this software went as far as to hire paid actors to talk about how amazing it is and how much money they are making. If it were really that great why couldn’t they get real users to make testimonials for them?

So should you buy this? Well as far as I see there is no reason for anyone to trust what is going on here. Why would anyone in their right mind to buy into this after reading what I have just explained? Now if you are new to the world of cryptocurrency and bought into it right after the video presentation, I can understand, but after seeing everything I just went over… There is no way I would buy into it that’s for sure.

All in all, this is your pretty typical get-rich-quick scheme when it comes to cryptocurrency. It has many of the common signs of a crypto trading scam. They lure people in with the idea of being able to make thousands of dollars daily online with extremely little work, only 10 minutes of work per day.

Now who wouldn’t want that?

I’ll tell you what… If this really did work out I would be all over it. I would already have bought in would be using it right now to make my daily $3000. But of course I am not buying it.

But anyways… Click the link below to learn more…