Is MOBE a Ponzi Scheme? – What You Should Know

If you are looking to buy into MOBE you may be hesitant to do so due to the recruitment aspect of the business. Many MOBE members go out and recruit others in as much as possible and this raises the question of it being a possible Ponzi scheme. Is MOBE a ponzi scheme? Is it a legitimate mlm? Is it any of the above?

In this short review I’ll be going over the payment structure that MOBE has in place and how things work. And by the way, I am not a MOBE member so I’m not going to be trying to make it sound better than it is.

What Exactly is a Ponzi Scheme?

Before getting into the meat of this review, its first important to know what a ponzi scheme actually is. In a nutshell, a ponzi scheme is “a form of fraud in which belief in the success of a nonexistent enterprise is fostered by the payment of quick returns to the first investors from money invested by later investors”.

Its basically a big flow of money with no value being provided. The only way they stay afloat is by bringing in new investors who’s money goes to paying off the older investors, all the while everyone is thinking that they are actually making money legitimately.

A Look at MOBE’s Compensation Plan 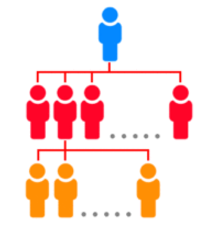 MOBE has what they call a 2-tier affiliate program and how it works is like this: As an affiliate, when you go out and sell MOBE products to other people you will earn a commission on those personal sales. On top of this you will also earn commissions from the sales that those recruits make…. that is it.

There aren’t 10 different levels with money flowing up a massive pyramid-like structure. The comp plan is very simple and small. I suppose you could consider it a mlm because there are multiple levels, but even this doesn’t really seem to fit. You are only making money from what you do and what the people you recruit do.

MOBE at its core is not a ponzi scheme. However, I feel that in a way, the affiliates who go out and really mislead and sucker people to buying in make it seem like a ponzi scheme. Let me explain…

Ok, so as you may know. MOBE is well known for having affiliates go around and promote all sorts of crazy get rich quick ideas that funnel people into buying MOBE. I review MOBE funnel sites all the time that are way off-based and extremely misleading.

In fact I just reviewed this funnel site called Get Money Relief where MOBE was being promoted as some sort of “personal stimulus package” where you could make money from some economic government aid loophole, which is so far from the truth it is comical. And there are plenty more where this came from, including Optimize Success Portal & My Hidden Pages. Its every week that I see a new very misleading promotion going on for MOBE.

MOBE is still not a ponzi scheme because once you do buy in you realize what it really is. You might be extremely disappointed depending on how much you were mislead with the promotions but you do find out what it really is, which is a digital marketing training/tools platform.

And in order to make money with MOBE you can either apply the tools and training to another online business or promote MOBE.

You are not making money from the belief in a nonexistent enterprise at this point so quite simply… it is not a ponzi scheme.

The Problem With MOBE

The problem with MOBE is its rogue affiliates that go out and promote this program in very misleading ways. Its a serious problem and leads to many people being victimized and buying in without knowing what they are buying into. MOBE could crack down on its affiliates but this has been going on for years and honestly I would say its as bad as its ever been right now. So I don’t see it changing.

I also would like to see MOBE back off some from pushing members to promote MOBE. Its true that members can apply the tools and training to any online business but members are also pushed to promote MOBE more than anything else. The main introductory product to MOBE, which is their 21 step program, pushes people to promote MOBE right off the bat. This is something I don’t like to see.

The Cost… People Are Forced to Pay Large Amounts of Money

If you buy into MOBE knowing the truth of the matter then there is no problem here because you know what you are getting into. However, these people that are getting suckered in by rogue affiliates that promote it in a very misleading way find out the hard way.

When you buy into MOBE, and if you decide to try to make money promoting MOBE, which you will be pushed to do, you are going to have to buy into the more expensive upsells.

Most people buy into MOBE with the $97 introductory course that consists of the 21 steps but the core products are much more expensive. The reason you have to buy them is because not only will they provide more training and tools, but most importantly they will provide you with a way to make more money. With MOBE you can only sell the products that you personally buy. So if you want to make money selling their way OVERVALUED high ticket products you will first have to buy them.

Based on the definition of a ponzi scheme MOBE is not one of them. However, I can see why people are asking if it is. When you go out and see people misleading and suckering others to buy in, then you see that members are pushed to promote MOBE and are forced to buy into the upsells if they want any chance of making good money, then yes it is logical to at least think MOBE could possibly be a pyramid scheme.

In closing: MOBE isn’t a pyramid scheme. They do provide good training/tools. They push members to promote MOBE. Many MOBE members promote the opportunity as a misleading get rich quick scheme. You will have to pay a lot of money to make a lot of money if you sell MOBE.

If you are looking for a much more affordable program for making money online my recommendation is Wealthy Affiliate. You can read my review of this program here.