Secret Millionaire Bot (at secretmillionairebot.com) is claimed to be a fully automatic “push-button” money making robot that you can supposedly make $2479 per day, but of course none of this is true. Just as you were probably suspicious of the moment you came across the ridiculous promotional video, this is a SCAM.

There are a lot of red flags that probably popped out at you when coming on the website, such as…

It just seems too good to be true, does it not? It sounds like other scams I’ve exposed recently, like Spring Profits for example.

I mean, why would you be one of the lucky few to be allowed into some “secret club” that uses a “push-button” and “fully automated robot” to make absolutely insane amounts of money each day? Why would they choose you? That is a question you have to ask yourself.

And as a rule of thumb, whenever you come across some push-button, fully automated system… It is best to proceed with extreme caution and do some research beforehand, because it is probably a scam.

In this quick review I’ll be giving you undeniable proof that it is indeed a scam and you are definitely going to want to avoid it.

What Is Secret Millionaire Bot?

At first this seems like an incredible way to make money online. It sounds like you just sign up, get access to this robot software and start bringing in tons of money on autopilot.

But, as you can imagine, it is nowhere as good as it seems. It is very over-hyped and anyone who buys into this will surely be disappointed. What you actually get access to is a bunch of poor quality training for affiliate marketing, which is just going to be a waste of your time and money.

It is not some system that you just plug into and start making money, not even close.

The system was supposedly created by some guy named “Charles Allen”, but I doubt this guy even exists. They never show his face in the video presentation and never provide any sort of verifiable information. I have reviewed plenty of scams over the years and they are almost always promoted under fake names, because of course the real people behind them don’t want to be known.

How It Works.. (Allegedly)

He claims that him and his team have created this automated software system that “identifies the most lucrative money-making-opportunities on the internet”. And it then targets and copies these opportunities into your account.

But what the heck does this mean?

Well… Your guess is as good as mine. This type of vague information that makes absolutely no sense is very typical of online scams like this.

They don’t want it to make sense. They went to make the system sound as awesome as possible, like something you have never heard of.

But of course it is all a lie.

Just About Everything Is Fake!

Do you remember the person pictured below from the video? She claims she has made over $221,000 in just over 2 months using the robot… 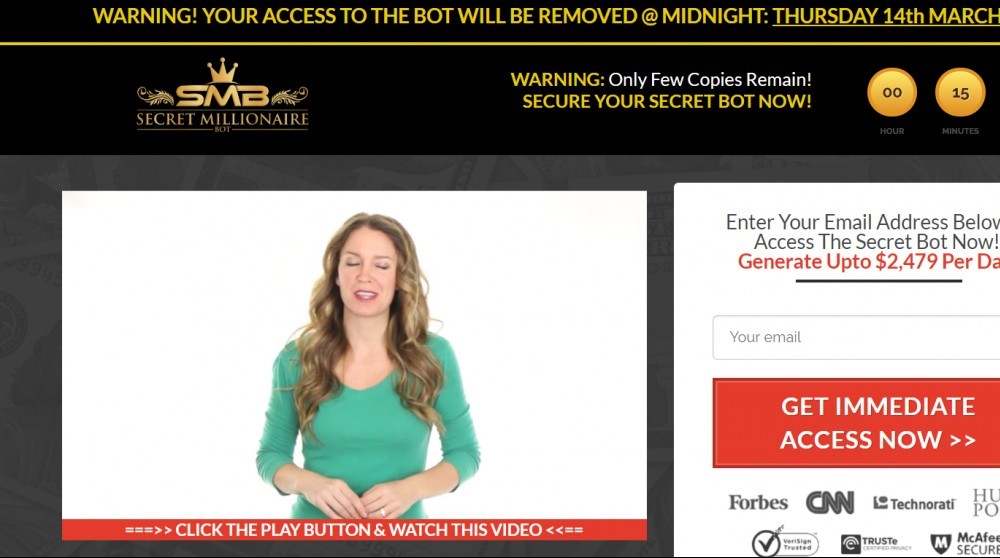 Now that would be pretty darn amazing… If it were real. But of course it is not real and this is just a paid actress from the freelance marketplace called Fiverr, which you can see here… 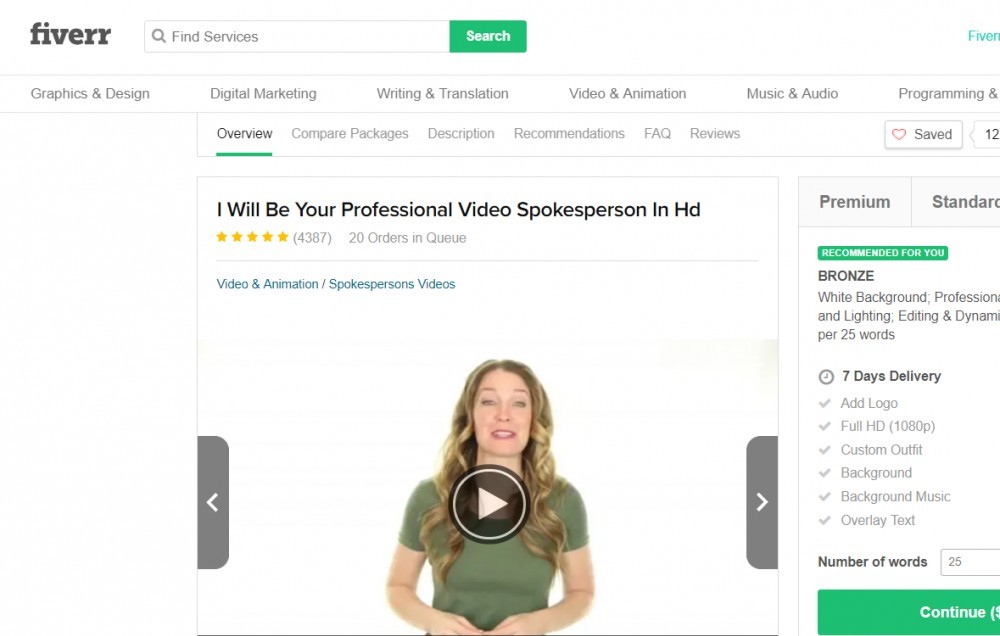 And all of the other people in the video presentation that claim to have made tons of money with this system are paid actors as well. They are all from Fiverr and I actually knew this before even looking into it because I have seen their videos online for other scammy “make money online” systems in the past.

The “real reviews” are fake too! 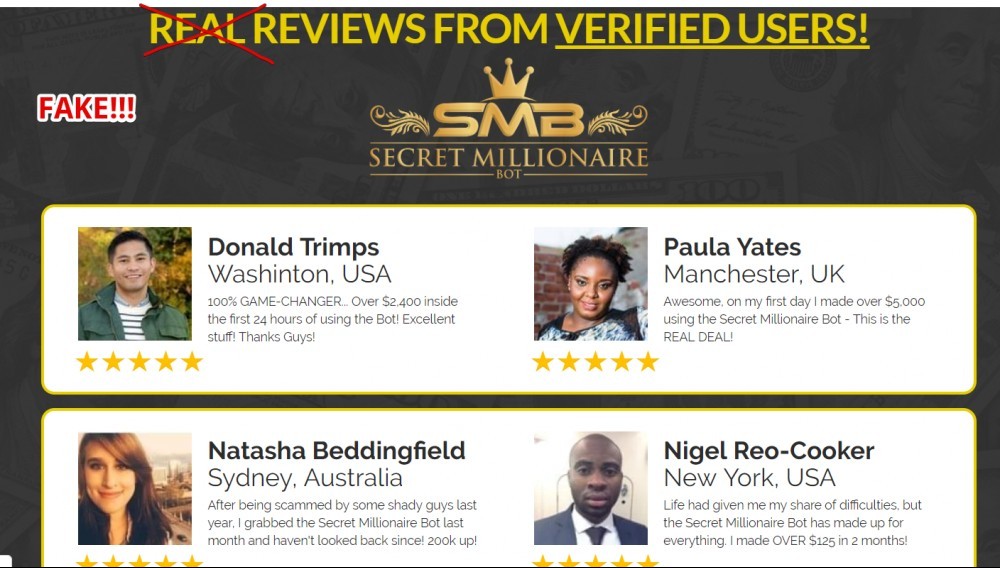 I had my suspicions since I already knew that the video testimonials were fake, so I decided to dig a little deeper and found that these pictures are all over the place online. As you can see below, I did a reverse Google image search and found them all over Google on various random websites, which more than likely means that they are stock photos anyone can purchase and use as they wish…

And the “social proof” is another lie

The social proof that they show below that, which supposedly comes from Facebook and Twitter, ya, that is also fake…

And don’t worry about the warning displayed at the top of the website. They say that the video will be removed that midnight, but this is another easily proven lie. You can simply leave the website and come back the next day to see this for yourself. The website and video will still be there… Not that it really matters because I don’t recommend buying into this crap anyhow.

As mentioned, you aren’t really getting some fully automated system like you are led to believe. You’re basically just getting a bunch of training on affiliate marketing, and not very good training.

This is why pretty much anyone who buys into this is going to be extremely disappointed. You are not getting anything nearly as amazing as you are told.

Affiliate Marketing Is Legit But Certainly NOT This Easy

Affiliate marketing is when you promote products online and earn commissions doing so. This is a completely legitimate business model and one I have years of experience with. In fact, I actually make a living doing affiliate marketing and have been involved in it since 2015.

I can tell you with absolute certainty that it is NOT as easy as they make it seem.

Sure, there are many upsides to making money online, one of which is that you can automate many of the processes, but no matter what route you take it WILL take work. There is no push-button system out there for making money like this.

Everything about Secret Millionaire Bot is a scam. Often times I’m pretty lenient when doing my reviews, but this particular product is extremely scammy so I’m not going easy on it.

I guess there is some value provided with the training that you get if you buy into it, but when you are expecting something completely different and much better, this isn’t going to seem like much value at all. It is only going to seem like a scam.

So anyways, obviously I do not recommend anyone buy into the system. And if you have already, I would recommend trying to get your money back as soon as you can. Luckily it is being sold through the ClickBank platform and getting your money back within 60 days should be relatively easy.

That said, if you want to know something that I actually recommend, I would highly suggest taking a look at how I went from $0 to over $6000 a month working online for myself. I explained exactly what I do, how it all works and how others can get started doing the same. This is something that I know works from my own experience.

Please leave any of your questions or comments below. I will get back to you as soon as I can 🙂