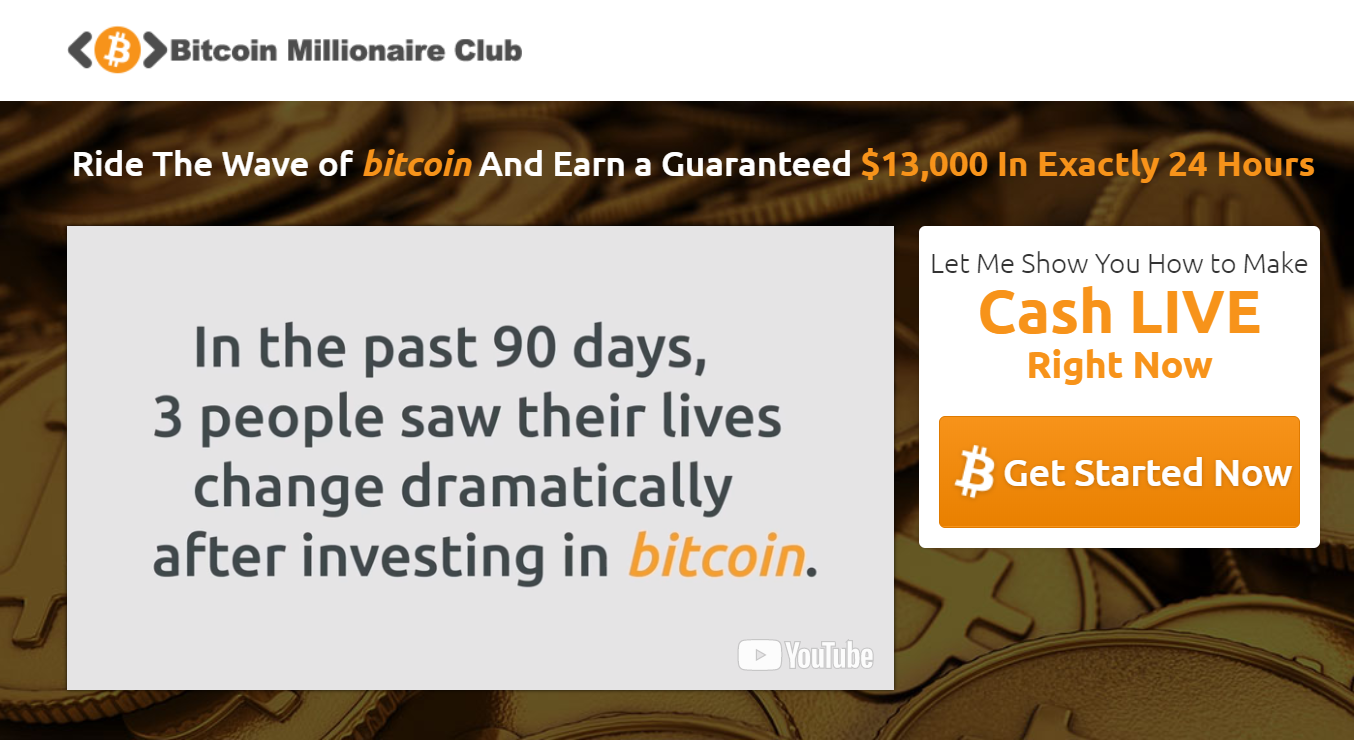 Is Bitcoin Millionaire Club a Scam? Or Can You Really Make $13,000 Per Day? – Must Read Review

If you are wondering is Bitcoin Millionaire Club a scam then good on you. This system sure sounds like a pure scam and you can never be too sure with all the new cryptocurrency scams that are popping up on pretty much a daily basis. I saw an advertisement for this software recently and after finding out the truth I knew I had to write a review on it.

To make a long store short…. you are NOT going to want to buy into this. It is NOT what it claims to be and you will just end up with less money than when you started. In this review I’ll be exposing this for what it really is…. a scam.

Bitcoin Millionaire Club is pretty much your typical “get rich quick” cryptocurrency software scam. It claims to be a completely automated, easy, and super fast way for people to make tons of money online. Who wouldn’t want to get involved with this right? I mean it sounds awesome but when something sounds too good to be true then it probably is…. and in this case that saying really fits.

Bitcoin Millionaire Club claims to be some software that some guy named “Steve Banks” created that flips bitcoin ads and can make you over $13,000 in just 24 hours…. Are you kidding me? $13k in just one day? This is really over the top. Just about everything about this software is a scam and I’ll prove it. This place is just filled with warning signs that its a scam.

First I want to go over how this software claims to work though.

How The Software Makes You Money

Well of course…. just as I expected… he tells you nothing about how this is actually going to make money. All he tells you is that it “flips bitcoin ads”. Well what the heck is this supposed to mean?

“Flips bitcoin ads”???? What? I actually trade cryptocurrencies on a daily basis, I am somewhat heavily invested in them, and I also work as an online marketer. So I know a fair amount about making money with cryptocurrencies and just making money online in general but I have no idea what the heck this guy is talking about.

He claims that the software is free but you have to make a $250 minimum investment. This makes it sound like its some sort of trading software but that makes no sense because he claims you are flipping Bitcoin ads.

Honestly I don’t know what to say here. It just makes no sense… period.  But it doesn’t really matter. This whole thing is just a massive scam as you will see as I go over all the lies they tell you…

All the Lies They Tell You

He then shows you 3 pictures of people which turn out to be completely fake. The pictures shown are nothing more than stock photos that anyone can buy and use online. I did a reverse Google image search for the one and sure enough found it for sale online as you can see here… 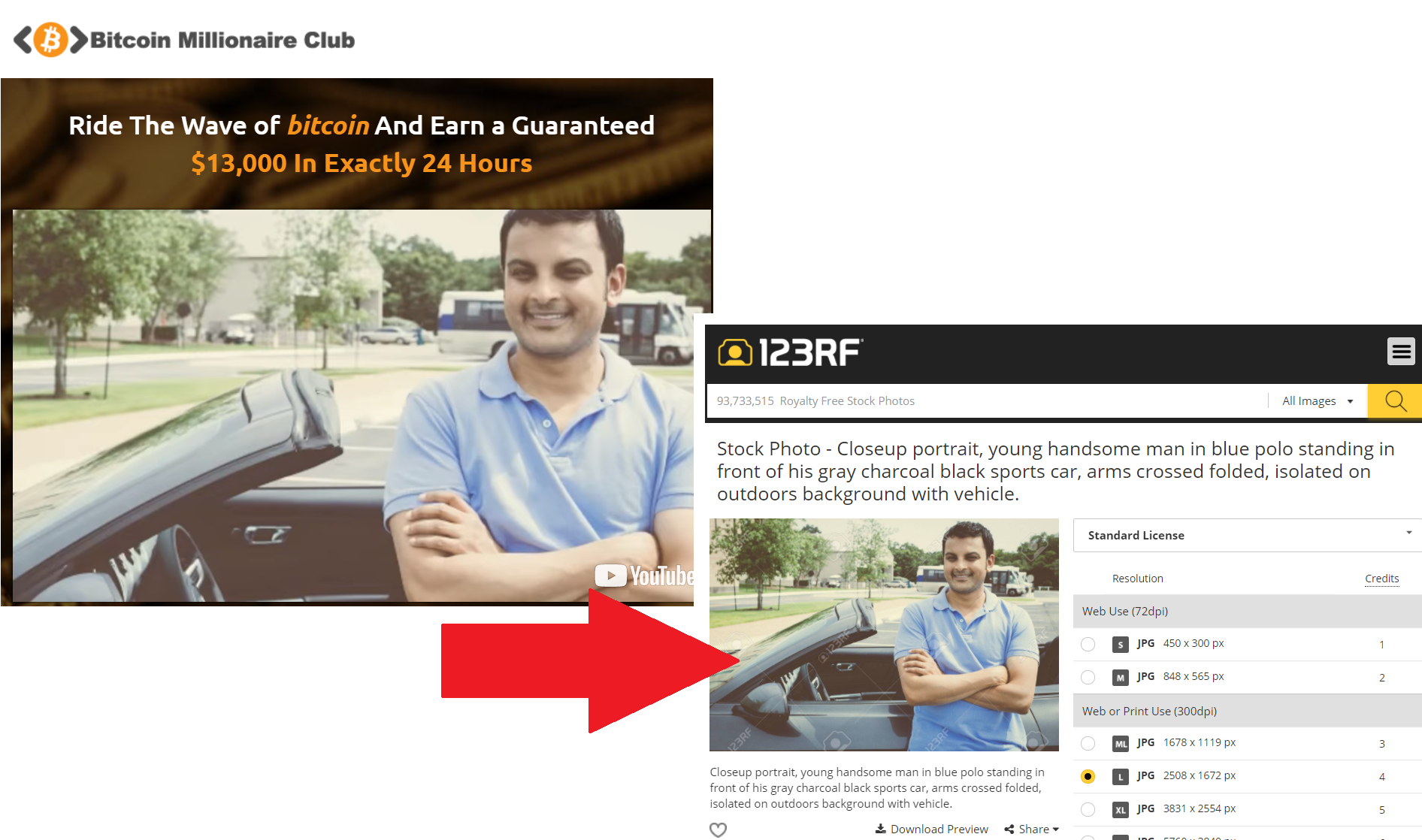 At one point in the video they show you a few testimonials from people claiming that they have made all sorts of money with this system. Unfortunately…. you guessed it …. THESE ARE FAKE TOO!

I knew they were fake as soon as I saw them because I review scams like this all the time. The people in these videos are paid actors from Fiverr that I have seen more than once. Anyone can pay them to fake testimonials like these… 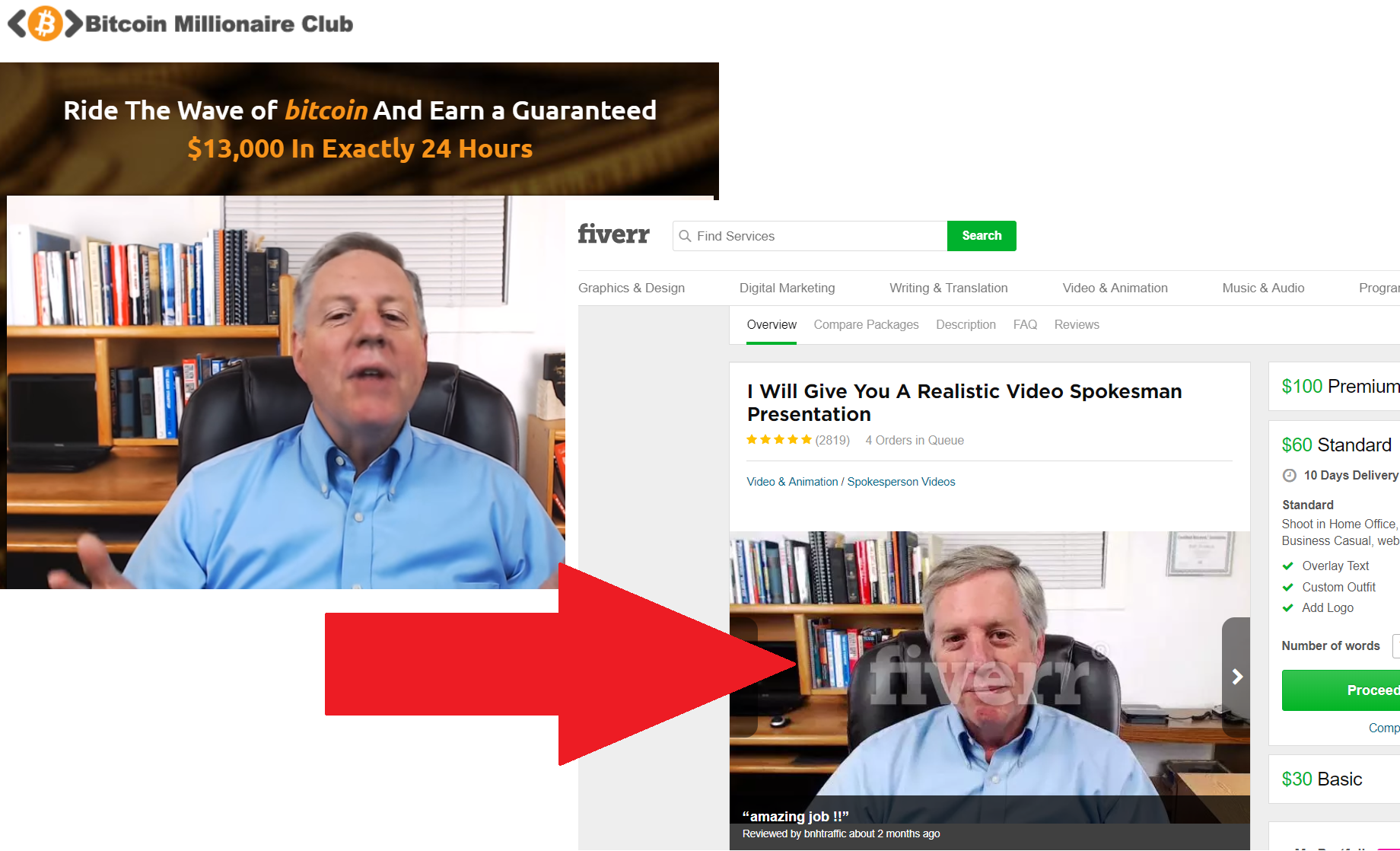 Steve Banks… Is This Guy Even Real?

The man behind this whole thing claims to be “Steve Banks”. He claims to be a software developer that is not a big time investor. He goes on to say that he has even been featured on the front cover of Forbes, the Wall Street Journal and other magazines.

Steve says that 3 years ago he had nothing to do with investing and knew nothing about what he knows today. He says that his old boss had him develop some bitcoin ad flipping software for over a year and this is what eventually made him rich.

But of course this is all made up and Steve is more than likely completely fabricated. I found out that this Steve guy is the same buy from The Bitcoin Code (another bitcoin software scam), only they changed up his last name…. clever…

Conclusion on Bitcoin Millionaire Club – Scam For Sure

I would only recommend this software to people who are looking to get scammed…. No but seriously. This is a scam and I would never recommend anyone buy into this. These scams systems are disgusting and prey upon those desperate to make money online.

If you were about to buy in consider yourself lucky that you read this over. And if you did buy in then I don’t know what to tell you. We all make mistakes. At least now you will be more careful in the future. There are tons of similar scams like this out there so you really have to watch out. CryptoRobo, Crypto Money Maker, etc are all scams. If something sounds too good to be true then its probably a scam.

In the online world there are way more scam programs than legitimate ones so it can be difficult filtering out the scams and finding the right opportunities. One program that I will always recommend if you are looking to make money online is this program. I’ve been a members since 2015 and make a living working online now. This has nothing to do with cryptocurrency but I know many people looking into this are just looking for a way to make money online.

You can read my review of this program Here.