Is Viral Traffic Machine a Scam? – No, But I Would Not Buy It 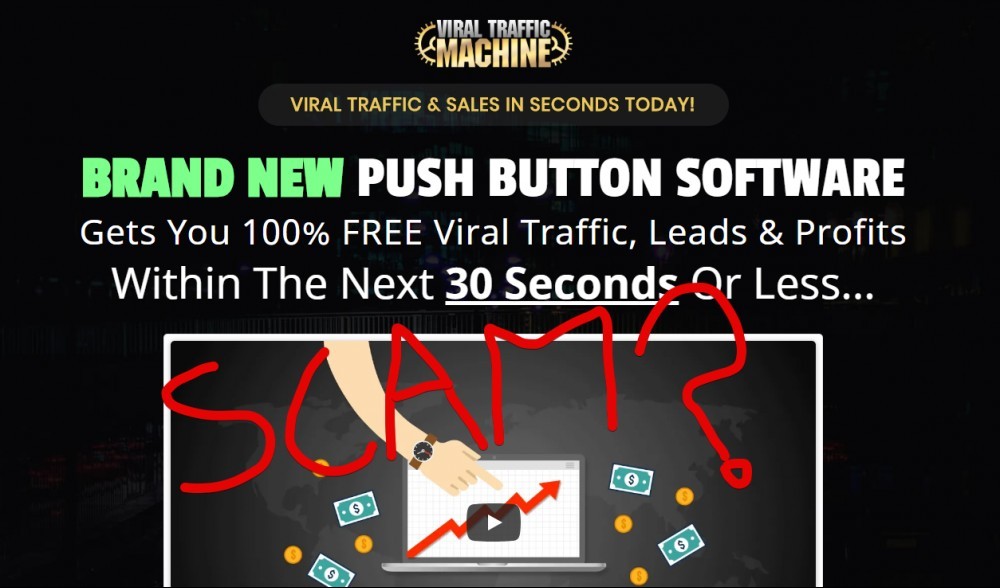 Viral Traffic Machine is said to be some new “push button software” that will get you 100% free viral traffic, leads and even have you profiting within the next 30 seconds or less.… Well at least that is what they tell you. But is it really that great? Should you be jumping on this opportunity or is Viral Traffic Machine a scam that is just going to be a waste of your time?

I’ll get straight to the point here and tell you that Viral Traffic Machine is not nearly as amazing as it is said to be. It certainly does not guarantee viral traffic and for many people who purchased this, it is not going to work out for them. In this review I’ll be going over how this software really works and why it is going to be a waste of time for many people.

Viral Traffic Machine it’s all about getting you a free viral traffic and sales… Or at least that is what it is supposed to do. It is said to work for complete newbies and only takes a few clicks of the mouse.

Having been created by Billy Darr in dollars, I was expecting this type of product. I have reviewed some of his other products in the past and he has a history of putting out overhyped products that just don’t work, plain and simple.

According to the sales page, all you have to do is activate the software with the click of a mouse and to sit back to enjoy all the viral traffic and profits that you will be making automatically. Sounds a bit like Viral Money Method and Viral Cash App so far, which I also definitely don’t recommend.

They claim that this viral traffic you will be getting “will convert into boatloads of cash for you”, but this is just another very misleading claim that is completely untrue. You will see why shortly.

When you are in the members area you will be able to import your social media accounts and connect them with the app. Then you will set up a campaign in which you will add the target URL for the offer you are promoting. This could be your own website, a landing page, in affiliate link, etc. Most people buying into this are probably just going to be using affiliate links since they more than likely don’t have their own websites.

What you will then do is add a title for the post, a description, and an image. The software will automatically show that post across all the different social media sites and this is really all it does.

The Idea Behind It

The idea behind this viral software is great, but it simply is not going to work out as planned.

The idea is pretty simple… You will be able to share a single post on multiple platforms with the click of a button and hopefully this post will go viral on one of the platforms.

There is not much better than viral traffic. You don’t have to pay for… And you don’t really even have to work for it. Once something goes viral it just gets is shared over and over again amongst its viewers without any effort on your part. But of course getting things to go viral is not a walk in the park.

Why This Will NOT Work As Planned

As I mentioned earlier, there were other viral online marketing products that I reviewed in the past and they all have one thing in common… They just don’t work as planned.

Getting something to go viral doesn’t have a procedure. It’s not like you can do this step, then this step, and then this… Which will cause it to go viral. Some things go viral when others don’t… It is a look of the draw most of the time, or at least that’s how it seems.

For example: you can have two of the same videos on YouTube, one will get millions of views and go viral while the other one will lie dormant and not really even get looked at. Going viral is very much a snowball effect and without the initial catalyst there could be a massive difference in traffic. And of course finding this magical catalyst to suddenly spark a post into virality is the hard part.

Viral Traffic Machine it certainly not going to get posts to go viral for you. If I use the software to post something about the weather today, such as it being sunny today this is definitely not going to go viral. You are also going to need good, attention grabbing, share with the content and even if you do have this… There’s a good chance it will go viral.

The bottom line is that getting things to go viral and getting viral traffic is like shooting in the dark… It is a hit or miss, most of the time and miss. This is why viral traffic is totally unreliable and why you will never see a veteran online marketer relying on viral traffic to make money. It is great and all, just not reliable by any means.

Is It Really Worth The Money?

So is Viral Traffic Machine really worth the money? This is open to anyone’s opinion, but in my opinion is definitely not worth the money. The only thing you are getting with this software is the ability to share content on multiple platforms in one go. Sure… It will save you some time rather than going to all of the platforms individually and posting the content, but the whole point of this thing is to get viral traffic. After all, it is called “Viral Traffic Machine”.

The name is totally misleading… A viral traffic machine is definitely something that this software is NOT.

Might you get viral traffic when using this software? Maybe. What will you? More than likely not.

A More Reliable Way To Get Traffic & Make Money

There are a lot of different traffic generation techniques out there, but one of the best in my opinion, especially for beginners, is Search Engine Optimization. This is when you get your content ranked in the search engines, like Google, Yahoo, Bing, etc.,  and get free organic traffic from people searching online.

If this is something that is of interest to you, I would suggest checking out the Wealthy Affiliate training program. This is the program I got started with back in 2015 when I first started looking for ways to make money online. To make a long story short… I now make a living working online which goes to show that it works.

At Wealthy Affiliate you are provided with the training and tolls for online business. It is a great program for beginners who know nothing and search engine optimization is the main focus of traffic generation, which is nice. But anyways… You can click the button below to read my full review because I’m not going to go into detail here…

Questions or comments? Please leave them below in the comment section and I’ll get back to you as soon as I can 🙂 I would also like to know what you think of Viral Traffic Machine. Do you think I was too harsh in it? Or do you think it is just another overhyped product that is a waste of money?