Is it true that you can make $500 today with Kids Paid Money? Is this actually a legitimate way to make money online or is this just another scam?

They claim that you can get paid to take surveys, watch videos and invite friends, however it is probably not how you think.

I joined this place recently just to investigate whether or not it was a scam and you will see why in this review I definitely do NOT recommend anyone join.

They make it seem like it is super easy to make tons of easy money, just by going around sharing your referral link on social media, but as I said… IT IS NOT LIKE IT SEEMS.

What Is Kids Paid Money?

When I first landed on the website sounded like a pretty typical paid survey type of site, like Swagbucks for example, yet I was suspicious because they claim you can make $500/day.

I am very familiar with paid survey sites and I know that making anywhere even close to $500 in a single day is out of the question. Paid survey sites often pay between $0.25 and $2 per survey, and what you factor in all the time being wasted getting disqualified from surveys and such, you end up making less than minimum wage.

So right off the bat I was thinking that this sounds a bit like a scam, or I guess I should say A LOT like a scam.

Also, what made this place seem even more “scammy” was the fact that there really wasn’t much to the website. It seemed kind of like some rundown website with not all that much information. And in the FAQ section they didn’t even mention anything about taking surveys or things like that. The only talked about referring others…

So now, at this point my investigation, I’m thinking that this might just be some type of referral scheme, which it basically is as you will see. In a nutshell this opportunity is not legitimate. It is a misleading recruitment scheme where they scam people and make money off of them.

The Signup Process [Redirected to Another Site]

So on the Kids Paid Money website I clicked on the “sign up” button in the top menu as you can see below, but what happened next was unexpected.

So I was expecting to go to some sign up page for Kids Paid Money, but instead I was directed to a different website called Kids Earn Cash, which pretty much looks like the exact same opportunity except for the name is different.

This got me wondering… Why would they change their name?

I have come across quite a few scams in the past and one thing I know is that scams often change their names because, once they are labeled scams, it is a hard label to get rid of. So they just change their names and rebrand themselves as some new opportunity, when really they are just some re-hashed old scam.

But I wasn’t exactly sure whether or not it was such, it just made me more suspicious. 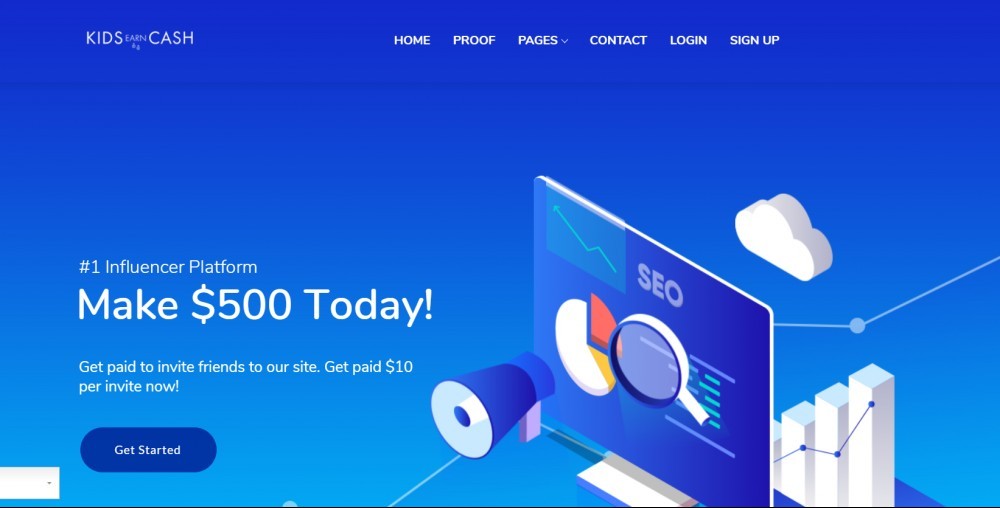 After entering my name, email and creating a password on this new Kids Earn Cash website, I had access to the dashboard where I would supposedly be able to make money…

So above you can see the inside of the members area, a.k.a. the dashboard. There really isn’t much to it. As you can see the first thing that pops up in front of you is your referral link and some statistics about your earnings, clicks, referrals, etc.

Below that there is a menu and I did see an option to take “$30 surveys”.

And again, this is something I was very suspicious of. As I just mentioned above, most paid survey sites only pay between $0.25 to $2 per survey. Getting paid $30 and one survey, that is a heck of a lot.

But I decided to click on it and check it out… 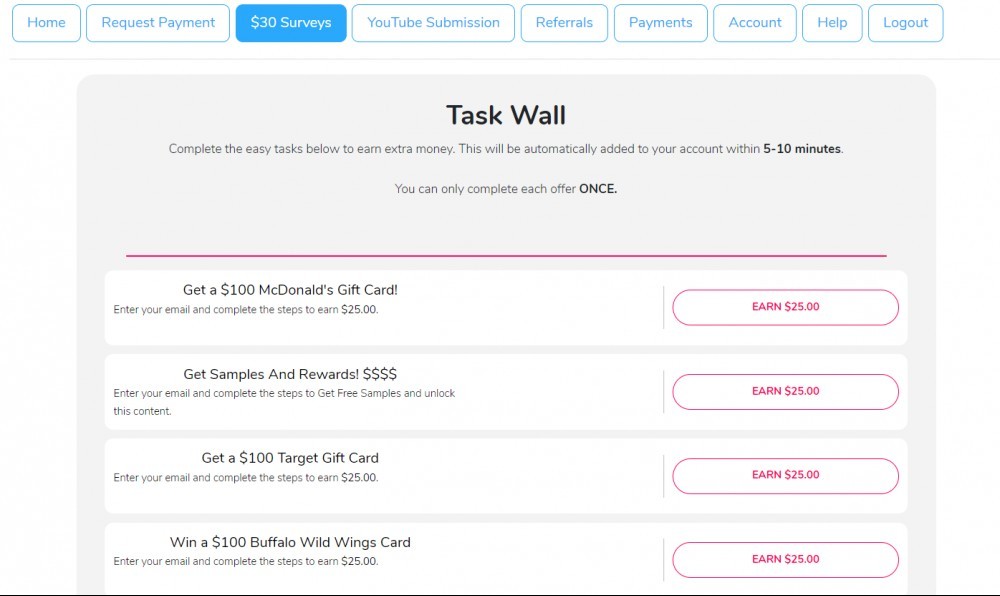 Most of these opportunities are to earn gift cards. I decided to try to get the $100 McDonald’s gift card and see what happeneds.

At first they made it seem really easy. It seemed like I was just going to have to take one survey and I would end up with this $100 McDonald’s gift card, which I should’ve known was a lie because it seemed way too good to be true.

One survey turned into two surveys, and then that turned into 2 surveys plus being forced to join some free trial offer… 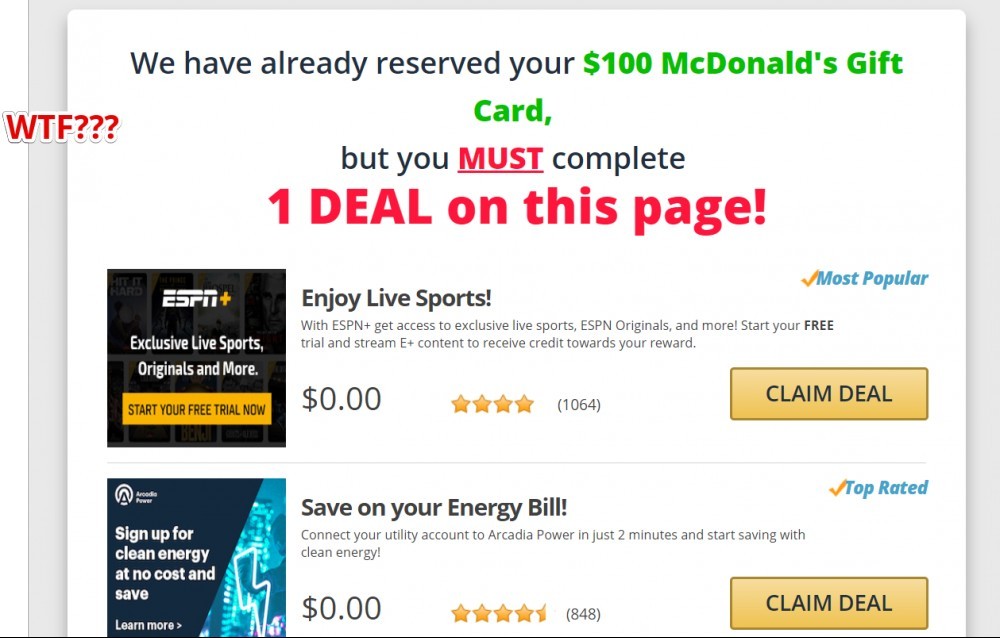 So anyways… It seemed like some endless loop where I just kept getting pushed into taking more surveys and completing more offers. It didn’t seem like I would ever get to the point where I would actually be able to claim a $100 gift card… So I gave up.

Ca you actually earn these high-priced gift cards? Who knows… But I have a good idea it is probably darn near impossible.

Definitely Not a Good Way to Make Money

Overall this website is very scammy. They lead you to believe that you are going to be able to make super easy money, up to $500 in the first day, but this is far from being true.

Instead you just run around in circles chasing your tail trying to claim gift cards that never come. And during this whole process you end up being forced to share a bunch of personal information which is going to ultimately of end up with you getting tons of spam emails in your inbox among other things.

Can You Make Any Money With This?

But of course the “main” way to make money is by sharing your link and referring others to join.

Can you actually make money by sharing your link like this?

This is another question that I did not have a concrete answer for. HOWEVER, I certainly do not trust this place and if you were to refer people I don’t know if you would actually be able to get paid.

I have come across many other opportunities like this that scam people and do not pay members as they should.

Another problem is that… Even if they do pay… How are you going to make money?

They make it seem so simple to share your link on social media, but the reality is that it will be much more difficult than it seems. And they provide absolutely no training whatsoever.

I have been involved in online marketing since 2015 and I can almost guarantee you that you will make little to no money sharing a link for an opportunity like this on social media. Most people don’t have massive social media followings and this means they don’t have much potential to begin with. And without proper training on how to market something like this it just isn’t going to work out well.

If you do end up signing up for this place then you have pretty much been scamed. You are suckered into thinking that you can make $500 in a single day from this opportunity when I don’t think there has been anyone to ever do this.

So don’t go out and scam other people.

Don’t promote this crappy opportunity just to try to make money… Which they might not even pay you in the end anyhow.

The bottom line is that this place is NOT legitimate and that it is NOT a good way to make money.

Why Not Earn Money a Legitimate Way?

What I would suggest is what is called affiliate marketing.

Affiliate marketing is great for beginners and is actually how I got my start online in 2015. It is when you promote products online and earn commissions when you help make sales.

If interested I would highly recommend reading my guide on how I make over $6,000 a month online doing this and the best way to get started.