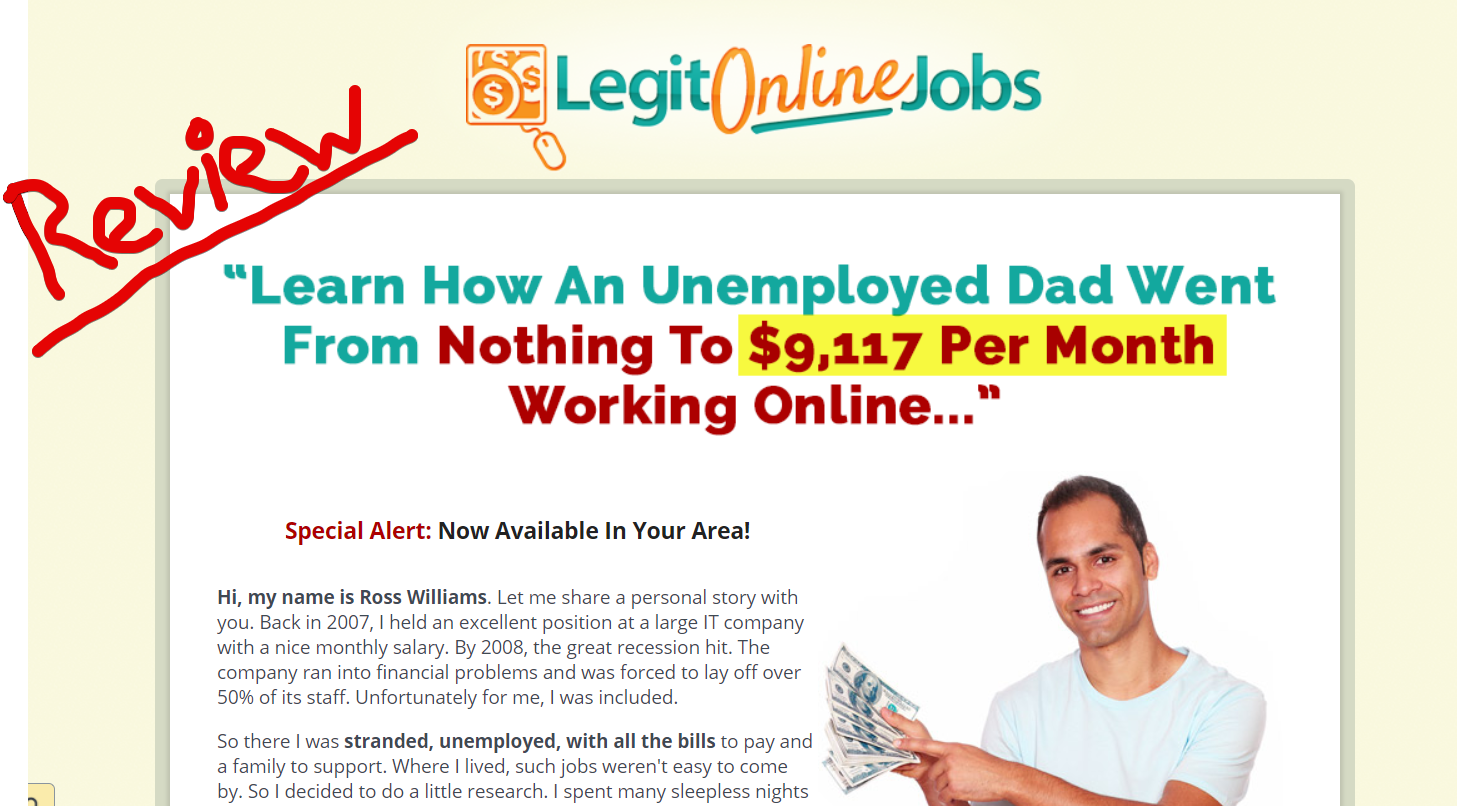 Legit Online Jobs (at legitonlinejobs.com) is a a website created by guy named Ross Williams that can supposedly give you access to some “secret system” that he is making $9000 per month with. He claims that it is very easy and that anyone can do it regardless of their experience or skill set… But is this really true? After all it seems that most of the “make money online” programs out there are nothing more than big fat scams looking to rip people off. So is Legit Online Jobs another scam or is this the real deal?

Well… I don’t like to disappoint but unfortunately this is a scam. I know I know, it sucks that you aren’t able to make $9,000 plus per month this easily but that’s just the way it is. The only person that is going to be getting rich with the system is Ross Williams the creator. You will be getting rich by suckering people to buy into it.

Legit Online Jobs is supposedly created by guy named Ross Williams, which you can see in the picture above. This guy supposedly used to have a great IT job but then got laid off back in the 2008 financial crisis. After scouring the web and wasting a lot of time looking into scams he finally found something that worked… Which of course is this program that he is now presenting to you.

With this program he claims there are no special skills needed and you do not need any experience. Anyone can do it of course and of course it is super super easy… Like I haven’t heard this before.

Ross explains to you that you will be posting short text ads for companies and working on your own schedule. He claims that “Companies worldwide are desperately searching for people just like you to type up their ads and post them online” and of course that you’ll make a ton of money doing so.

From what he shows you it seems that all you have to do is create an account with this Legit Online Jobs system, select companies within the system, and then just post a bunch of links everywhere. He suggests using social media, classified ads, online forums, etc. to post these ads.

And of course Ross claims he is making over $9,000/mo doing this stuff. He also provides an income calculator that you can enter in different variables and see how much you can potentially make doing this. But this is all a bunch of BS as I will explain. 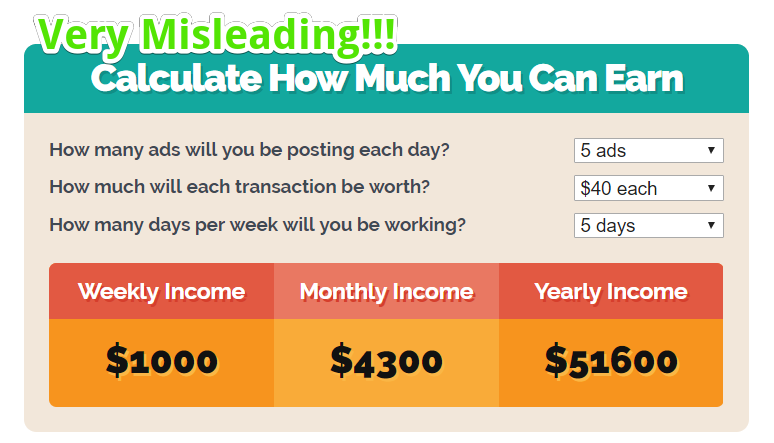 The Truth Behind The Lies

Ross makes it seem as if you are just posting these short text ads for companies all over the place and you are going to make tons of money doing so. However, as I’ve mentioned multiple times, this is a bunch of BS.

Big companies like the ones he claims you’re going to be doing this for do not pay regular everyday people to post ads for them. They have massive marketing teams made up of professionals that work on this.

This system that Ross is explaining seems to be loosely related to what is called “affiliate marketing”. Affiliate marketing is actually how I make a living working online so I’m very familiar with it. It is when you promote different products for companies online and earn commissions when you helped make sales. So is not like you’re just posting ads for companies and getting paid to do so. You are permitting various products and only earning commissions when you helped make that final sale.

The income calculator that Ross provides, which I took a screenshot of above, is extremely misleading because you never know how much you will actually make promoting products. You only get paid when you helped make the final sale and you never know how many people are going to click on your affiliate links and actually follow through to purchase the product. There is no way possible of accurately predicting this. To say that you’re going to make $40 for each ad or promotion is absolutely ridiculous.

Why Using This System Will Not Make You Money

While in some of what Ross tells you is true to some extent, it is very misleading. He tells you that you will be posting ads for companies and making money doing so which I guess is not too far from the truth, but anyways that is not the point. The point is that even if you do use the system you will not make money.

Why? Well because none of these companies want people going around spamming ads (promotional links) everywhere.

Companies like Amazon, Walmart, Target, Best Buy, Adidas, Nike, and pretty much every other big company out there have affiliate programs where you can get paid to help promote products and earn commissions doing so as I explained above. However these programs don’t just allow anyone to go out there and promote their products. You first will have to apply to become an affiliate and if they see that you are just spamming links everywhere they’re going to kick your butt out. This is the type of stuff they do not want any part of.

Lots of Similar Scams Out There

This reminds me a lot of many other scams I have reviewed over the years called “Link posting” scams like Home Based Wealth System, Link Cash System, The Computer Geeks, etc. Basically what they will tell you is the same type of thing. They will say that can make tons of money posting links for companies and will provide you with income calculators as if you’re going to make a set amount of money for every link that you post. And of course if you buy into their system you get set up with these companies and they tell you what links to post and where to post them.

As a general role of thumb, if something sounds too good to be true than it probably is. This little saying will save you from a lot of scams that are out there and is something to think about. This Legit Online Jobs opportunity sounds way too good to be true. How can you make $9,000 per month doing very little work like this? The answer is you can’t. If it were this easy everyone would be jumping in on the opportunity and this added competition would just make it less lucrative. But of course it’s a scam so most people are avoiding it.

It would be much better if they would just change their name to Scam Online Jobs. This would much better represent the opportunity at hand and people would know what they’re getting themselves into. But of course that would defeat the purpose. The purpose of this website is to scam people out of their money. If they told you it was a scam then they would not make any money out of it.

Oh and by the way, this Ross Williams guy probably doesn’t even exist. I mean I know there are lots of people out there with the name Ross Williams but what I am saying is that this particular Ross Williams is more than likely made up. I did some digging around on him and couldn’t really find anything to prove that he does really exist. With scams is very common to see made up names and fake images used because of course the scammers did not want to reveal their true identity knowing that they are going to create many enemies from ripping people off.