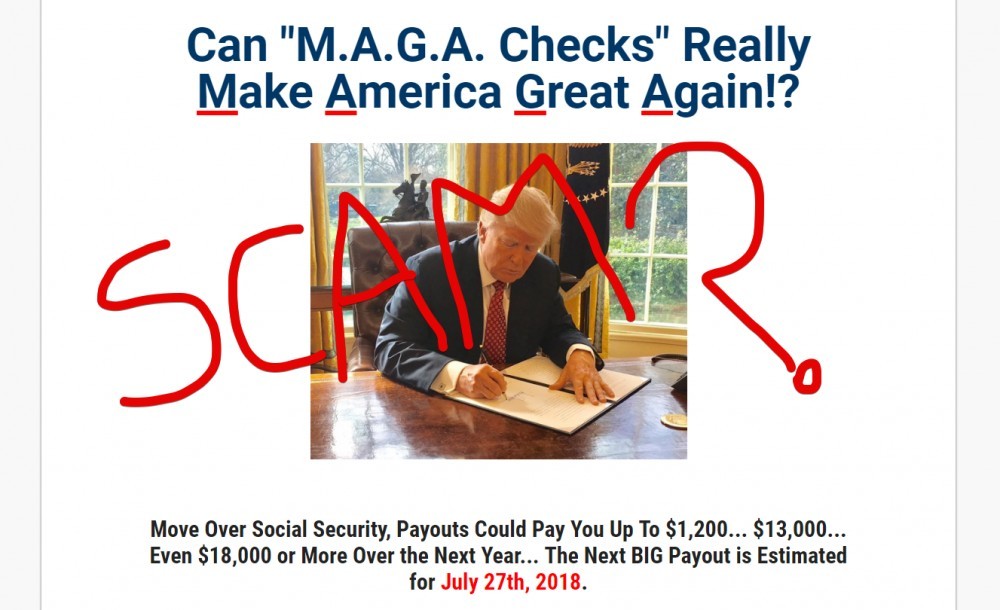 “MAGA Checks” Scam Exposed – What Is Really Going On Here?

Can you really start collecting “MAGA Checks” on a regular basis for thousands of dollars, or even tens of thousands of dollars? Is it really that simple? Did Donald Trump really passed some new law to allow you to start collecting these checks, regardless of your age, political affiliation, etc.? Or is this all a bunch of bunk… Is it possible that MAGA Checks are a scam?

As you are probably somewhat aware, or at least I assume you are, these MAGA Checks are not what they seem to be… Or at least not what you are led to believe they are. I’m guessing that you probably heard or saw an advertisement for these checks and thought it sounded a little bit too good to be true, which lead to you doing some research on your own and eventually you came across my review here.

In this review I will be exposing this scam for what it really is. While I guess some may argue with me on whether it is a scam or not, there is no doubt that the opportunity is incredibly misleading and that many people feel scammed who get sucked into it.

The sales pitch is put on by a guy named Dr. Steve Sjuggerud. He talks all about how you can start collecting these “big cash payments” from the MAGA Checks that Trump has something to do with.

Right off the bat you are probably thinking that these are some sort of government approved checks and are something like Social Security, but then he tells you that this has absolutely nothing to do with the government and Social Security.

Throughout the pitch there are a bunch of statement shown about people who are supposedly collecting tons of money on a regular basis with these checks. However, there is absolutely no proof that any of this is true or that you these people even exist for that matter.

I would say that nearly half of the sales pitch is just a bunch of talk about people collecting all this money from these checks but there is no proof offered at any point that these claims are real.

But anyways, what the heck are these checks that he is talking about anyhow? They sound pretty darn amazing but throughout the sales pitch he only gives you small hints at what they are and never actually provides any good details. This is all the work of a salesman… He keeps you wanting more and of course you have to take action and subscribe to the newsletter, that I’ll talk about in a bit, in order to find out what you are really getting into.

What Are MAGA Checks Really? Do They Even Exist?

So what the heck are MAGA Checks?

Well, I can tell you one thing… These checks do not exist in the sense that you are led to believe. There aren’t any checks that are actually called “MAGA Checks”. This is just a stupid name that Dr Steve Stuggerud my stuff came up with.

There are some hints at what these checks actually are throughout the sales page, such as how you will need money to invest and how companies are distributing these checks, but there is no clear picture given. You are also told that it is all about real estate and have something to do with companies renting other companies large amounts of land.

What it all comes down to is some law that “helps revitalize an obscure government real estate program from the 1960’s” which Trump has something to do with.

What Are They Really?

But anyways, was get to the point here… These checks are really just dividend payments that anyone can get after investing in certain companies, and in this Casey is specifically talking about real estate companies that rent mass amounts of land to other large companies.

He claims to have selected 225 “Trump approved institutions” that he wants to share with you. Apparently these companies pay out “3 times more than other MAGA check companies”.

What’s The Point of This Ridiculousness?

So you may be wondering, what is the point of all of this? If this guy is willing to go to quite ridiculous lengths to put together this incredibly misleading sales pitch, there has to be a reason for. In the reason probably has to do something with money, right?

Well… You would be right to assume this. The point of this entire deceptive sales pitch is to lure people into subscribing to a newsletter called “True Wealth“, which is similar to other investment newsletters I have reviewed in the past like True Momentum and  Real Wealth Strategist. This is a newsletter edited by Steve Staggerud in which he basically makes recommendations for assets that he thinks have profit potential.

The cost of a subscription is $49 for one year, but of course it was normally priced at $199 and you are getting some type of a “special discount”..

The Shady Company Behind This

The company behind this all is Stansberry Research, which I also have reviewed in the past. Misleading promotions and advertisements for their latest newsletters like this is nothing new… It is something this place is very good at and often participates in. In fact, in the past their founder, Mr. Porter Stansberry himself, was forced by the SEC to pay back 1.5 million to subscribers after they determined that he had defrauded them by making misleading statements that he knew were false in order to lure in new customers. You can read more about this in this US News article.

If you do a little bit of research on this company you will find plenty of negative reviews. On the BBB’s website they have an overall rating of 1 out of 5 stars, which is pretty darn horrible if you ask me. Most of the complaints made seem to be from people who have made a one time purchase, or thought it was supposed to be a one time purchase, of a $49 investment book (also in $19 investment book) and then were charged for additional subscriptions without them knowing. Pretty much all the reviews are about this sort of thing.

Okay… So there isn’t anything actually called “MAGA Checks”. The opportunity is way overhyped and made to seem like some fairytale investment opportunity. The company behind it all is incredibly shady and has had run-ins with the law in the past.

Oh yeah, how about the fact that he completely leaves out and forgets to mention how you will have to have a significant amount of money to invest in order to make profits like those mentioned in the sales pitch. Remember, these checks are really just the dividend payments and if you want to collect thousands of dollars regularly then having just a couple thousand to invest isn’t going to cut it.

It may seem that this guy is doing some great American deed by helping out “hard-working Americans”, but in reality he is doing the opposite. He is preying on people that are desperate to secure a good retirement, mainly targeting the older conservative Republican population.

Subscribe to this newsletter if you want to, I mean there are some people that have left good reviews about it, but I am certainly not going to recommend getting involved. This is just not the type of business I think is worth getting involved with in there are for more negative complaints out there than positive ones.

But anyways, I hope you enjoyed this review and found it helpful. Please leave any questions or comments down below and I’ll get back to you as soon as I can 🙂