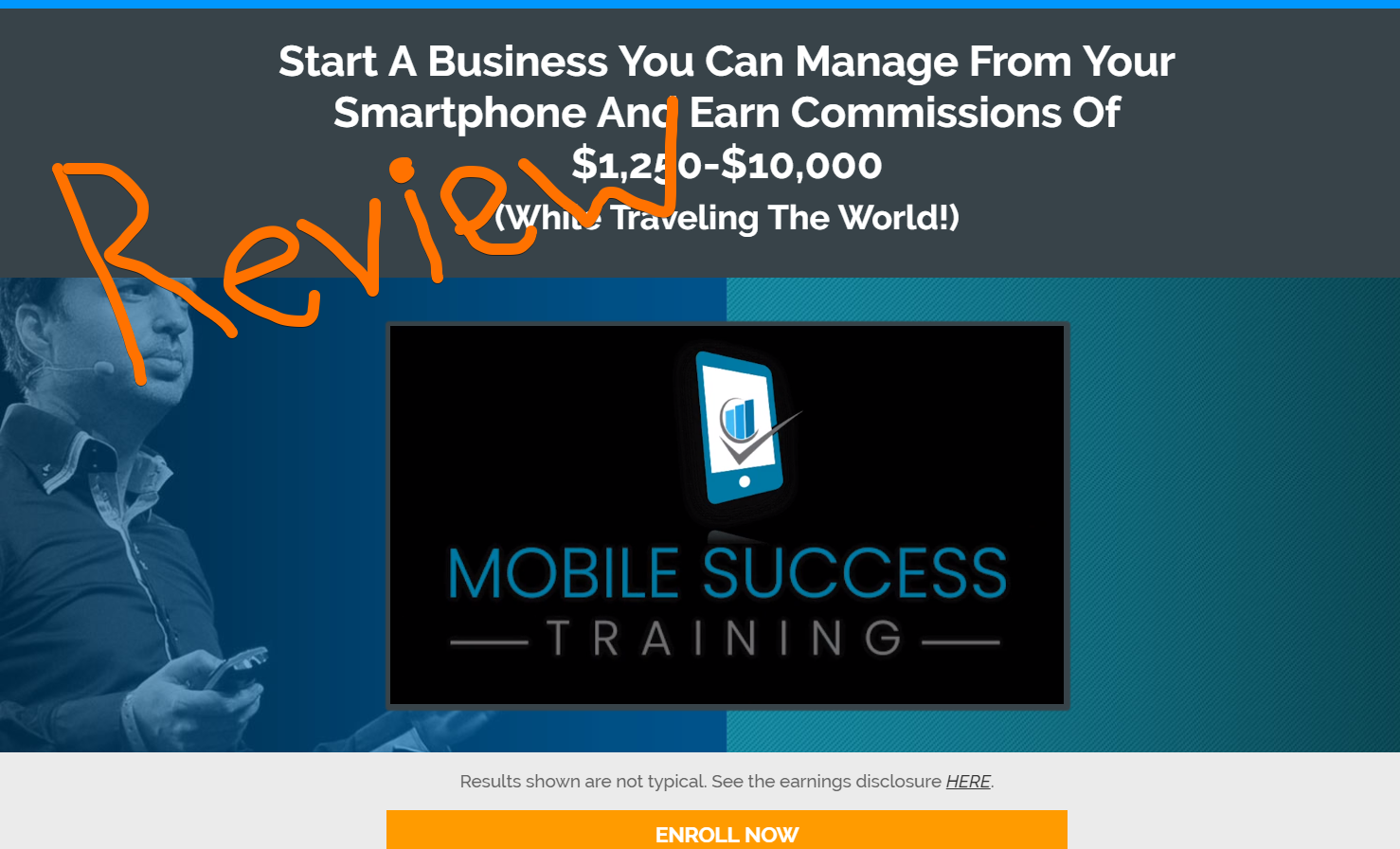 Mobile Success Training, or MST, is a money making opportunity presented by Paul Mahoney where you can supposedly make up to $10,000 commissions online. But is this opportunity really as good as it seems? After all it seems like pretty much every opportunity has some sort of catch to it. So what’s the downside… What is the catch?

While this particular opportunity that Paul is promoting is something that you can make money with, there is a catch to it… A big catch. In this review I’m going to be diving into the reality of this opportunity, how it really works, and hopefully give you all the information you should know to make a better choice about whether to buy and are not.

There are probably multiple video presentations for this program but the one I watched started out kind of like your typical get-rich-quick scheme permission. It started out with Paul talking about how he is about to cross the $1 million mark using the system after having worked in a 9-to-5 job at a Guinness brewery. The video presentation was pretty flashy with talks about being able to travel the world while you make money along with beautiful and captivating vacation pictures to get people excited and ready to jump on board.

However I will say that Paul is much more honest and straightforward than many of the other people I have seen promoting this particular opportunity. He doesn’t lead people on thinking that they are going to make tons of money super easily. He tells you that not everyone makes a lot of money with this and he also provides a link to the earnings disclaimer page so that you can get a real idea of how many people are making money with this, which I will go over shortly.

But what the heck is this program that he keeps talking about? What is this opportunity that you can supposedly make $1250-$10,000 commissions with?

The Real Program being Promoted Here

If you paid close attention in the video presentation you may have noticed this. When Paul is talking about how this program has paid out over $75 million in commissions he shows you videos of life events where people were getting handed large checks. And if you look closely at the top left corner of these checks you will see that it says MOBE… 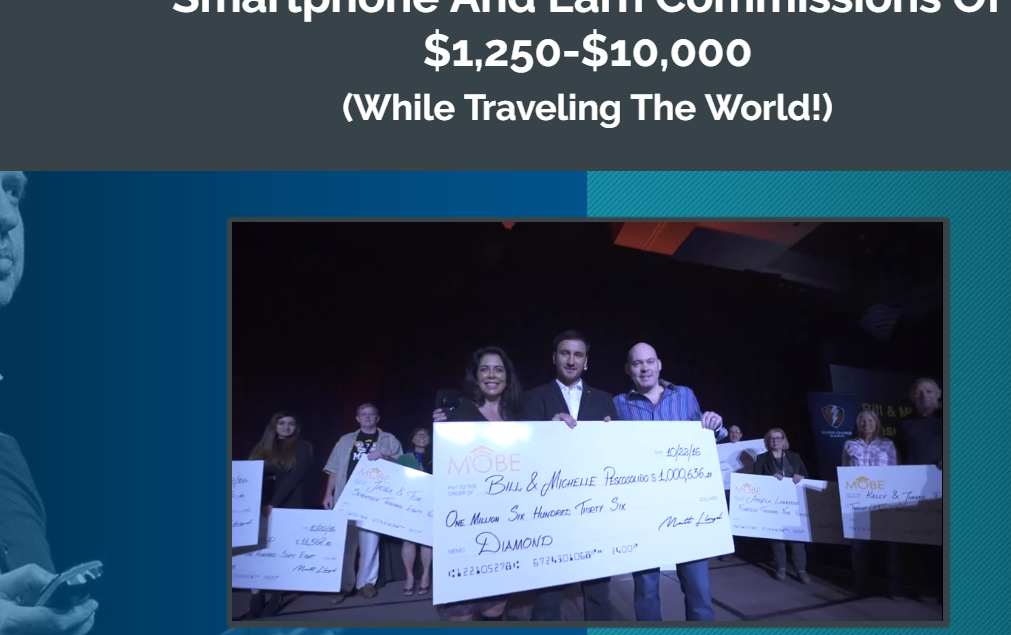 So What The Heck Is MOBE?

MOBE is a digital marketing platform that provides training, tools, and holds live seminar events all over. Basically what it is, is a program that’s goal is to provide a way for people to make money online.

The $75 million in commissions that were paid out from MOBE that Paul was talking about… All of those commissions came from members selling memberships to new people that are joining. It is possible to apply the tools and training that MOBE provides to any online business, but the whole system is mostly focused on getting people to promote MOBE and make money this way.

What You Aren’t Told…

It is true that you can make $1,250-$10,000 commissions with this program. How is this possible? Well because there are multiple products, or memberships, that MOBE has in that you can sell and make commissions with. So as you can imagine, if you’re going to make a commission of $10,000 by selling a single product than the product you’re selling must cost more than $10,000. In this is true. MOBE is what you call a “high ticket” program because it is extremely expensive and you can earn really large commissions selling these extremely expensive products.

What exactly are these high ticket products that you’re selling? Well they basically come with digital marketing training, tools, access to live seminars, coaching, etc. There core products that MOBE sells range in price from the low $1,000’s all the way up to $29,997 as you can see in this chart…

Okay… Sounds good… You can make massive commissions selling high-priced products. So…… What’s the catch? What are they telling you?

Will the catch is that you first have to purchase the products before you can sell them and make commissions doing so. So if you want to earn large commissions you will first have to pay large amounts of money to buy the product yourself. This is what they don’t tell you upfront and this is where they really crank in the money because the system lures people in with talks about being able to earn massive commissions but does not tell them that they will also have to pay massive amounts of money.

The introductory product to buy into all of this is only $49 but this is just the beginning of things. You will have to purchase upsells and spend lots more money if you actually want to be successful here.

Can You Really Make Money With This?

Although I do not care for these kinds of systems at all, that are just based around selling memberships for the system, I have to be honest in this review and tell you that yes you can make money with this, although it will not be easy.

If you look at the earnings disclosure statement that they provide you will see that there are some people making a heck of a lot with this. Some people are making over a million a year. However… The majority of people are making close to nothing and not nearly enough to live off of as you can see…

Okay, so Mobile Success Training really is nothing more than a funnel created by Paul Mahoney to get people to join MOBE. Paul is a member of MOBE and he is doing exactly what the system teaches people to do, which is go out and recruit others to join the system. He makes money getting people to join and if you join you will be pushed down the same path. I am very familiar with MOBE because I review funnel systems created by MOBE members like this all the time, such as Rookie Profit System, Your Easy Business, Secret Society of Millionaires, and plenty others.

Now is this all a scam? Well can come to your own conclusion on this. I guess this all depends on what your definition of a scam is. At the very least I would definitely say this is a shady business model that almost entirely revolves around recruiting new members in and then teaching them to recruit new members in.

Whether you want to join or not is up to you. But let me just tell you this: I sure as heck will not be joining a program like this.