Paid 4 Clout is another one of these websites claiming you can make up to $500 today just by referring people through social media. They also claim to give out a $25 bonus for signing up, but the problem with all of this is that it isn’t true.

Paid 4 Clout is a scam and in this review I’ll be going over why.

I’m sorry to disappoint, but unfortunately making money online isn’t quite this easy. There are a lot of scam websites out there identical to Paid 4 Clout that are luring in unsuspecting individuals, getting them to do work, but then scamming them and not paying.

My guess is you probably saw Paid 4 Clout promoted on social media, or maybe you even go an email with a link from someone promoting it. Unfortunately the people promoting it think they are going to make a bunch of money, just as P4C tells you, but they will end up being disappointed in the end when they find out they don’t get paid.

We are told that we can supposedly make $500 today and there is even a $25 sign up bonus just for signing up, for a limited time of course.

Right off the bat this sounds a little bit too good to be true… well… actually a LOT too good to be true. And you being the logical person that you are decided to take the time to do a little extra research beforehand, thus leading you to my review here.

At the same time the website looks pretty professional, they claim to be the “#1 influencer network”, and the sound of making such easy money is very tempting. Not only that, but they also have all sorts of testimonials from people who have supposedly made a bunch of easy money through them.

How (They Claim) It Works

Sounds easy enough… all they say that you have to do is 1) join, which is free and you supposedly get a $25 bonus for doing, 2) invite friends, share your influencer link and get paid $10 every time someone else joins, and 3) get paid via PayPal, CashApp, Bitcoin, checks in the mail and more.

They even have a calculator on the website where you enter in the # of followers you have on social media and it tells you how much money you could make on a daily basis.

I entered 300 just to see what it would say and it is telling me that I could make $73/day… which is pretty darn good considering this takes almost no work. 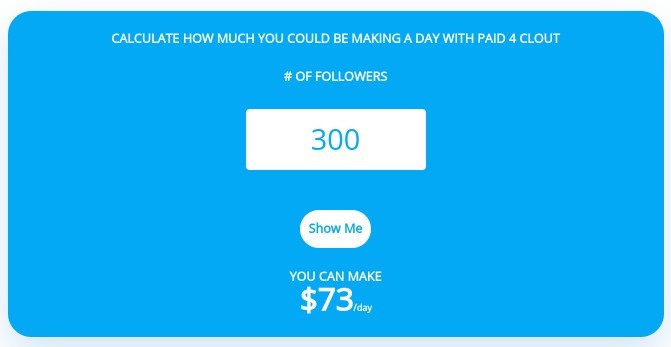 However, this is mostly a bunch of lies.

Why it Does NOT Work Like They Tell You

Let’s talk about that income calculator, which is a bunch of BS.

How could it possibly estimate how much income you can make just by having you enter the amount of social media followers you have?

They know nothing about your social media followers and how interested they might be in an opportunity like this. It’s ridiculous and is just some stupid feature they added to the website to try to make it seem legit.

Come on now. This is getting more and more ridiculous. How on earth can they afford to be paying people $25 just to sign up?

The answer is that they can’t… and shortly I’ll show you what actually happens when you sign up.

When you go to the Testimonials section of the website there are tons of videos from all these people who claim to have used this program to make loads of easy money. However, they are all fake.

Well, at least that is my assumption because I know for certain that some of them are fake.

Take for example the video shown below… 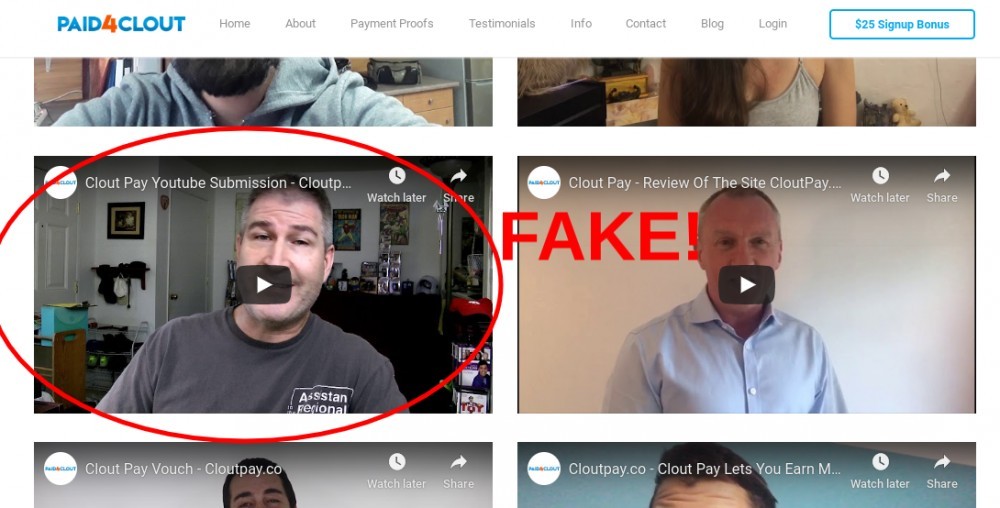 As soon as I saw this guy I knew it was a fake. I’ve seen him many other times while reviewing scams online and this is because he is actually a paid actor that is available for hire on Fiverr. So the scammers behind this Paid 4 Clout scam paid him to make a video about it.

Here you can see a job posting of his on Fiverr… 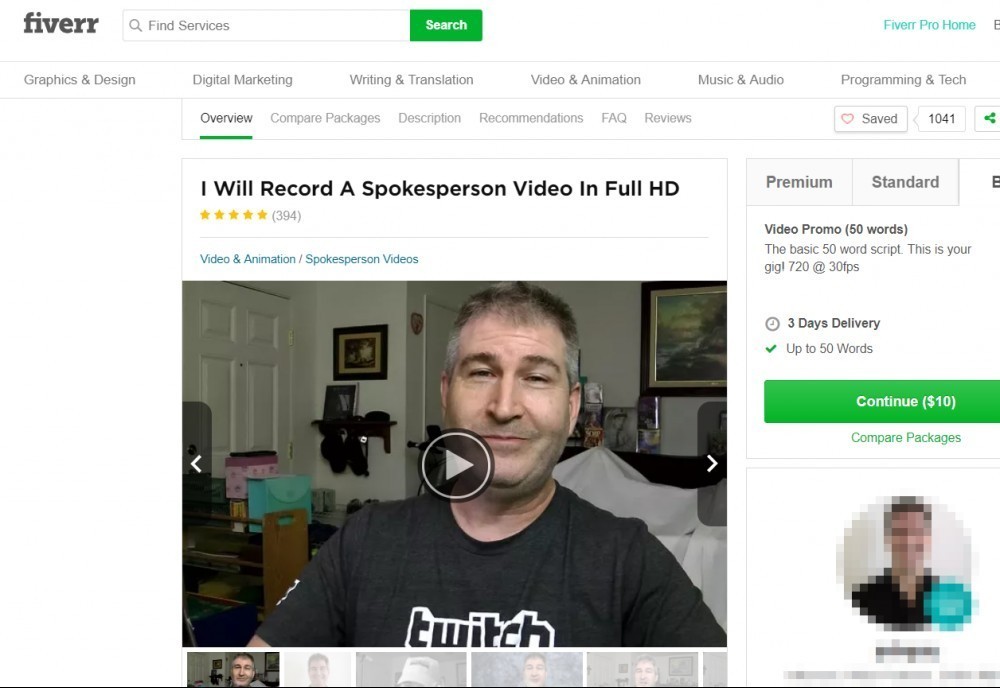 Lies About The Number of Members

The truth is that you can’t really trust anything this place tells you. Not only are the video testimonials proven to be fake, but the statistics they give us are ridiculous.

However, I did a WHOIS search and found that this website was just registered in July of 2019… making it absolutely impossible for them to have gained this many members and paid out this amount of money in such a small amount of time. 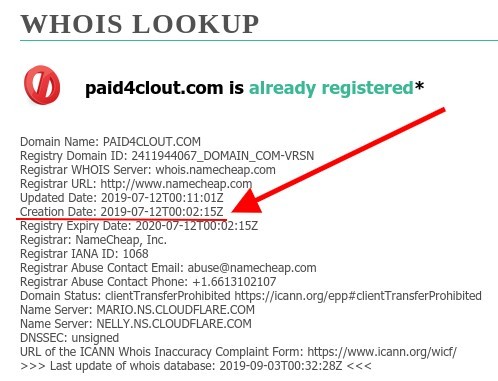 There are also quite a few complaints you will find online from people who have tried to withdrawal their earnings without having any luck.

Take for example this complaint from ScamAdviser…

Want to know how this really works? I’ll show you…

This Is What Happens When You Join

The first thing that happens is you get this ridiculous message saying that not only can you earn $10 when you get someone to join, but you will also earn $2 for every person that simply clicks on your link… 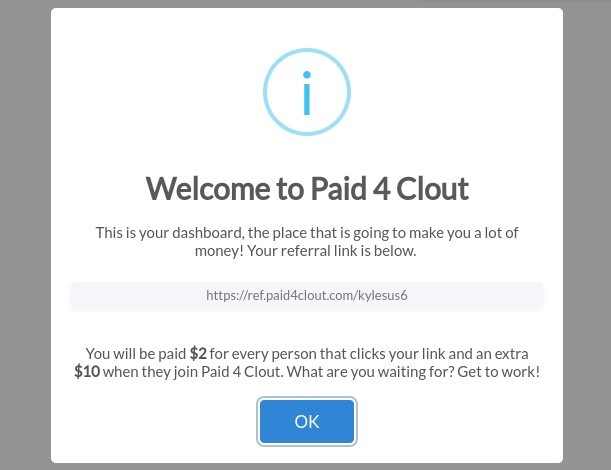 How the heck can they possibly have the money to pay us $2 just when someone clicks our links? They can’t!

You can see that right in the center you get your referral link that you can share. This is the main part of all of this.

I was thinking $30 is a heck of a lot for taking surveys. I’m used to sites like Swagbucks that usually only pay $0.50 – $2 per survey. It sounds too good to be true but I checked it out anyhow…

Sure enough! It was too good to be true.

Sounds amazing to be able to win free smart phones and get paid up to $30 from Paid 4 Clout at the same time, but unfortunately this isn’t going to happen.

What happens is you are taken in a never ending circle of filling out information so that you can supposedly win the phone, but you never end up making it to the end. It’s basically a way for these scammers to extract as much personal information as possible from you, which they can then use for marketing purposes.

There was actually an identical scam a while back called Viral Pay that did the same thing. It also claimed to be the “#1 influencer network” and had a bunch of scammy looking offers, one of which was to win a $100 McDonald’s gift card… 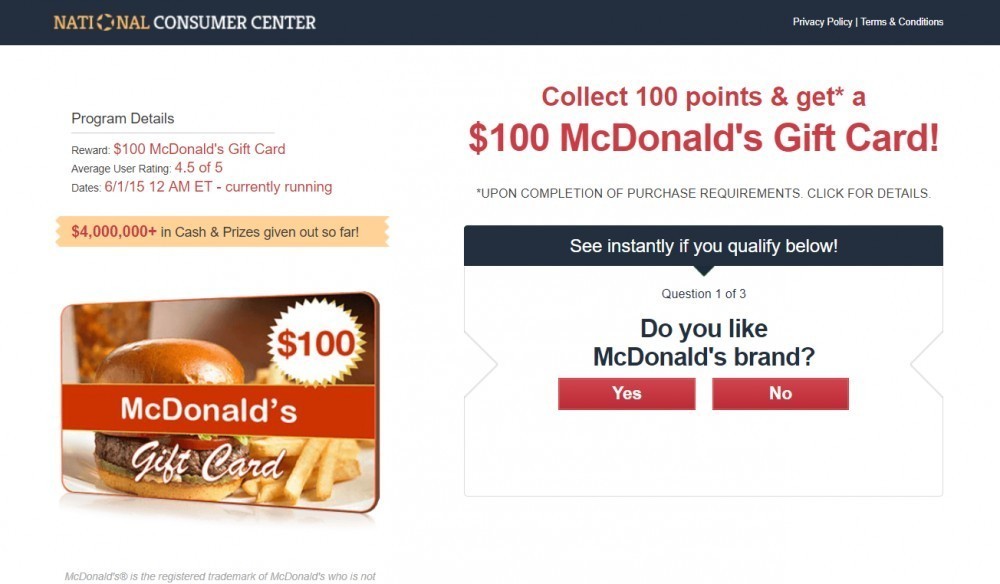 It would tell you that you have to collect 100 points to get the gift card, but would lead you around in circles and I’m pretty sure it was impossible to ever collect those 100 points. It would basically direct you to a bunch of different websites to enter information, sign up for things, etc… just to collect all the personal information it could from you.

All in all there is nothing legitimate about this website. To me it seems like one big scheme to harvest as much personal information from people as possible.

They trick people into promoting this opportunity with the hopes of making money online and then trick everyone to enter more and more information when trying to win offers.

Don’t expect to make any money and don’t expect to win any offers. What you can expect is to get a ton of spam in your email inbox after signing up for all sorts of things they push you to sign up for.

Looking For a Real Way to Make Money Online?

If you want something that is actually proven to work then I highly suggest Wealthy Affiliate, which is the same program I’ve been using since 2015 to make money online.

Why do I recommend this program? Well, simply because I know from experience that it works.

You can read my review of Wealthy Affiliate here to find out more.

Take care and be sure to leave any comments or questions below. I’ll get back to you as soon as I can 🙂