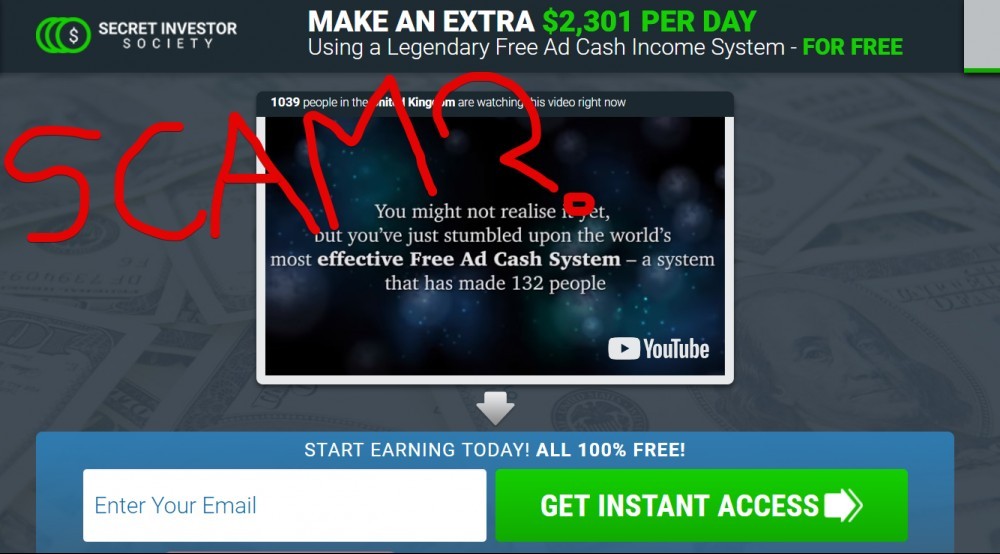 In this review I’ll be going over all you need to know about this place. Read it over… You are going to want to. If you are considering buying into this then you are definitely going to want to reconsider. This place is not as it appears to be and I will be exposing the truth.

Secret Investor Society is supposedly the creation of Simon Green, a.k.a. “the flipper”, or at least that is what he calls himself.

He claims that this is the “most effective free ad cash system” that is out there and when you hear this you probably have no idea what he is talking about at first. A “free ad cash system”… What the heck is that supposed to mean?

But anyways, he claims that hundred and 32 people have become “filthy rich” in the last 2.5 months using this system, so it has to be good, right?

In the video presentation he tells you that you are probably suspicious of it all because of all the scams out there. He says that most people claim to be able to make you money online but actually have no clue how to do it themselves. But of course he does and he “will change the way you think of money”.

He goes on to say that after today you will never need to worry about money again and that you will be able to earn $25,000 per week by “flipping online real estate”.

The way this software supposedly works is by flipping advertisements for you, which only takes a few clicks of the mouse… Of course.

In just on cue, he tells you in the video presentation that the video contains sensitive information and could be taken down at any time, which means that you have to buy in right now if you want to.

I’m guessing that you are reading my review here because you are suspicious of it all, and rightly so. The video presentation is pretty much the typical get-rich-quick sales pitch.

Of course you can make tons of easy money, very fast, the opportunity will not be available for very long, and of course it is some secret new method that no one really knows about. Typical.

Below I’ll go over some of the red flags that you should be aware of, which point of this being a scam, and after that I will go over how this scam really works… How they actually scam you out of your money.

Red Flags You Should Be Aware Of

The first major red flag is all of the ridiculous income claims that Simon makes. He says that he will change the way you think of money because it will be so easy for you to make all this money with the system.

Any online system that claims to be able to make you tons of money with very little work is likely a scam. In fact, I have never seen a system that makes claims like this that does actually work.

#2 – The Testimonials Aren’t Even Real

Do you remember seeing those testimonial video clips in the video presentation from people who have supposedly been using this system in making tons of money?

Like this guy for example, who says that he didn’t think it was possible at first but ended up making over $3000 in the first 48 hours. Unfortunately… These testimonial videos are completely fake. The people in these videos are paid actor’s that are available for hire on the freelance marketplace called Fiverr, as you can see below…

The same goes for the other testimonials. This guy says that with this system the checks keep piling up and that he has no more worries about money. Same thing here… He is a paid actor that is available for hire on Fiverr…

Can’t forget the false scarcity. The scammers behind this have to make it seem urgent that you buy in immediately, this way you don’t take the time to do a little bit of extra research and come across reviews like mine.

Simon Green, who is probably completely made up by the way, says that the video presentation contains sensitive information in that big advertising companies don’t want you to know about what he is doing. So they are trying to shut him down and if you leave the page you might never be able to come back to it.

He goes on and on about this BS about the advertising networks trying to shut him down and of course he is only letting a few lucky people into the society because he wants to keep things small and less noticeable. Luckily you.

How It Works (What He Tells You)

Here is his explanation for how this “free ad cash system” works:

Supposedly you log into the system, it find you the best online advertising opportunities, and you just pick which ones you want to buy, which you will then be able to sell for profit.

So pretty much he tells you nothing at all about how it actually works. I guess you have to believe in magic in order to believe in the system.

The the idea behind it makes some sense… You buy ads that are low in price and then sell them after they start to perform well and are worth more. You flip them.

But it is all just a bunch of BS and this is not how it really works.

How It Really Works

How it really works is like this… Which he doesn’t tell you.

The minimum balance needed is $250 and if you do deposit this good luck ever seeing that money again.

This is actually an old scam that has been rebranded under this new name of “Secret Investor Society”. It used to just go by the name Free Ad Cash System, as he calls it by numerous times throughout the video presentation. The funny thing is that I actually reviewed this  Free Ad Cash System in the past. There are also others like it, such as  Bitcoin Advertising. They are all the same “ad flipping” scams.

You can avoid 99% of scams out there just by thinking about whether or not something sounds too good to be true. If something sounds unrealistically good, it is probably a scam…. Especially when they claim you can make super easy money with very little work, and tons of it.

You obviously did a good job with this scam… You got that gut feeling that it was a scam and proceeded to do your own research. You didn’t fall for it, or at least hopefully didn’t, and this just saved you a bunch of money.

Secret Investor Society is a pure scam. If there was anything legitimate about this place then I would say so, but there is not. Everything you are told is a lie and everything about it is a scam. You will not make any money with this.

What will probably happen, based on what I have seen with similar scams, is you will deposit your money and it will appear as if the system is actually working. You will think that you are making money but when you go to actually withdraw that money you won’t be able to.

So anyways… I obviously do not recommend the system to anyone, unless of course you like to be scammed.

If you are looking for a legitimate way to make money online that is “beginner friendly”, then I would suggest taking a look at this program. This is where I got started back in 2015 when I first started looking for ways to make money online. To make a long story short… I am still a member and I now make a living working online, which goes to show that it does work. But anyways… Click the button below to learn more, I’m not going to go into detail here:

questions or comments? Leave them below and I’ll get back to you as soon as I can 🙂