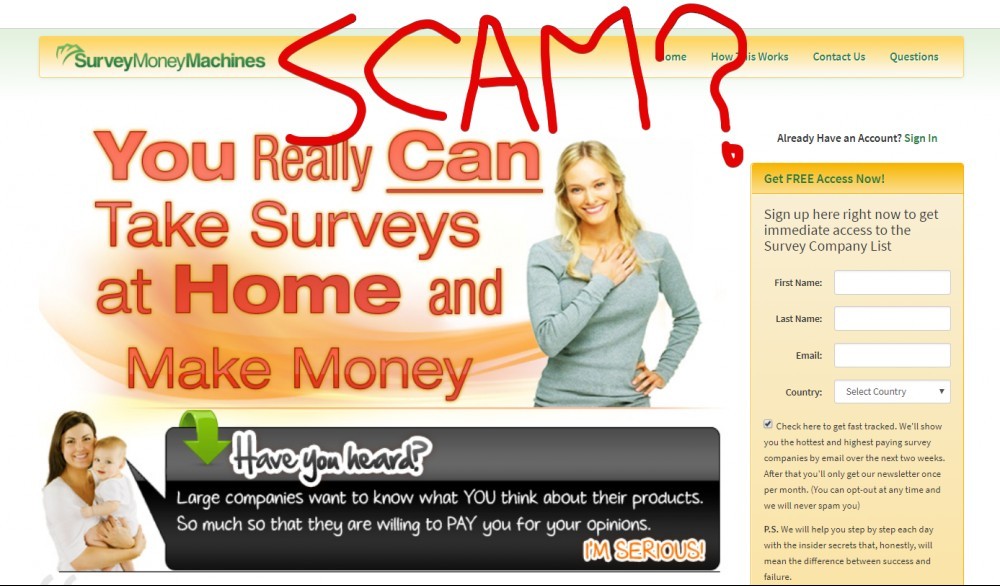 Survey Money Machines is presented as an amazing way to make money online taking paid surveys. But is it really as amazing as it seems to be? Or is this all just unnecessary hype for something that is just going to be a waste of your time? Is Survey Money Machines a scam  that you should avoid?

These are all questions I’ll be answering in this review. I will be going over what Survey Money Machines actually is, how it works, whether or not I think you should use it and more.

Spoiler Alert: I would avoid using the site. There is just no point in using it in the first place.

Survey Money Machines it is a site that is supposedly the creation of a woman named Hailey Gates, but who knows if this is actually true or not. I’m guessing not.

Why do I say this?

Well because I ran a reverse Google image search for one of the pictures of her from the website and found that is used on multiple other websites. It was actually cut out of a larger picture as you can see below… 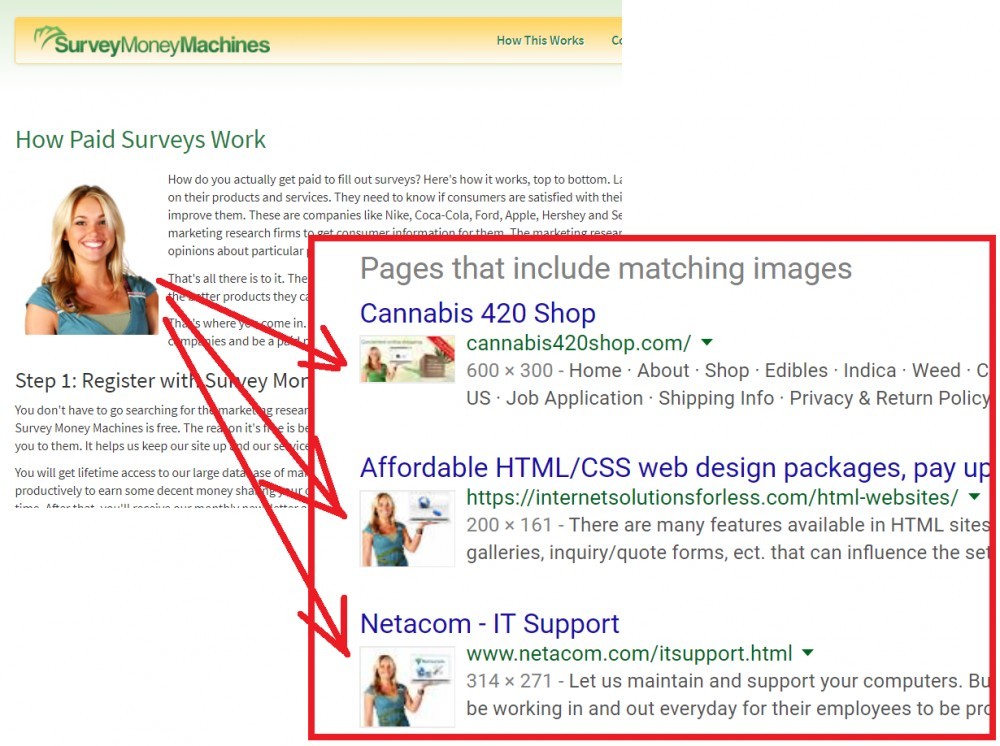 But anyway… She tells you that the “secret” to making good money with online surveys is to sign up for as many survey sites as possible. This way you will receive many more survey offers.

And of course she is going to tell you exactly which survey sites are the best ones to sign up for so that you make as much as possible.

Well first off let me say that this is definitely not a secret. Anyone can easily figure out that since survey sites have limited surveys available they should be able to sign up for multiple sites to increase the opportunity they have. This is not rocket science and certainly not a “secret”.

The survey sites that are recommended you sign up for our nothing special either. She leads you to believe that you will be getting access to little-known hidden gems of survey sites when in reality she is just referring you to popular mainstream paid survey sites that everyone knows about. 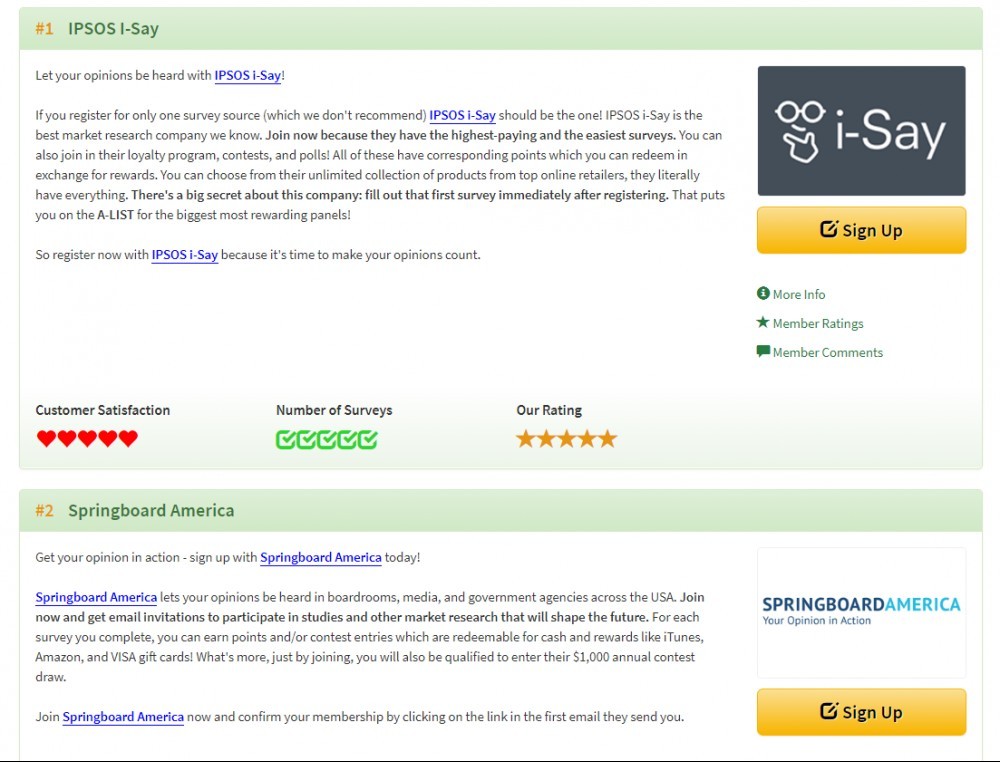 The ones that I was presented with include the following…

These are all your pretty typical paid survey website, definitely nothing special here. With any of the above mentioned sites you are looking at making around $0.50 to $2 per survey, generally speaking. They are all your typical “run-of-the-mill” paid survey sites.

The Highest Paying Survey Out There!!??

On the Survey Money Machines website there was a “special note” that caught my eye. In it Haley said that there is one survey site that she is only allowed to share with you via email and this is because it is the highest paying one. I was curious what was going on here so I clicked to enter my email and proceeded forward.

What I found out is that this was actually just a clever little lure to get you to sign up for Haily’s “7 Days To Survey Success” challenge where she keeps telling you to sign up for survey sites. There was no high paying site that she revealed here. In the email she just told me to sign up for Ipsos and Springboard America.

You could call it a “hidden” agenda, but is not really hidden. If you go to the “How This Works” page she will tell you that marketing companies are paying her to refer people like you to their sites.

That’s right, she is getting paid when she refers users to sign up for these paid survey website. Just about every paid survey website out there has a referral program where they pay people to do this and anyone can do it. Myself I actually active in the referral program for Swagbucks and earn a little bit of money getting people to join that site.

Usually the sites pay anywhere from a couple cents to a couple dollars per referral, it varies a lot.

There is nothing wrong with getting paid to refer people to sites like this via referral marketing, I just don’t like the way that she goes about doing it where she is constantly shoving paid survey websites down your throat telling you to sign up for them. This reminds me of a few other sites like this that you may have heard of, including Survey Sheep, BigSpot,

Prepare To Get Flooded With Spam

If you do follow through with what she tells you to do, signing up for her mailing list along with joining the paid survey websites that she recommends, prepare to get flooded with spam. You’re going to need to put your rain boots on when you go to check your email inbox.

If you do sign up a good tip would be to create a new email address that you only use for paid survey sites.

It would be different if this please provided something of value, but they do not. I have seen other similar websites to this, that refer you to a bunch of paid survey sites, but actually have value. For example, one that I reviewed allowed you to enter in all your personal information a single time on their website and then they automatically entered it in when you would sign up for all the recommended sites, which saved you a lot of time.

But Survey Money Machines really doesn’t do anything besides pushing you to sign up for all the different paid survey sites out there, none of which are anything special.

Like I said, just go straight to the source instead of using this Survey Money Machines site. Don’t give the person behind this site, who probably is NOT named Hailey Gates, a reward by signing up through her links. There is nothing wrong with getting paid to refer people in of itself, but when you do it in a tricky way like this there is a problem… but of course this is just my opinion and what the heck do I know.

So ya… just go sign up directly at the different survey sites. I listed the ones that this place refers you to above so you know what to look up in Google. I would also recommend Swagbucks if you are going to be signing up for different sites.

You might also want to think about the fact that you will be earning extremely little money before signing up for these other sites though. Paid survey sites are notorious for paying very low these days. Like I said, you can usually expect to earn $0.50 – $2 per survey. This may seem good because a typical survey only takes 15-20 minutes or so, but once you factor in the disqualifications you will get and things like that you are earning even less per survey, or maybe I should say per attempted survey.

Something else you might want to take a look at before you go is how I make money online. This is something I started out doing in my spare time in 2015 and now I make good money with it. You can click the button below to see what exaclty I do, how it works, and how beginners can start doing the same.

Please leave any questions, comments, or concerns below and I will get back to you as soon as I can. Also leave your own opinion of Survey Money Machines down there. I’d appreciate that and I’m sure other readers would too.