Survey Queen claims that you can make $100 “sharing your opinion”, but unfortunately this place is not what you think. Is it a scam? No, I wouldn’t call it that, however, this is not a place I’m going to be recommending to my readers and for good reason.

In this review I’ll be going over what exactly Survey Queen it is, what they have to offer, how it all works, why don’t recommend it and more.

So when I first landed on the website I was thinking it was going to be your typical paid survey site. These types of sites are very common and I am very familiar with such. Basically how it works is that they host their own online surveys along with third-party online surveys and you get paid for taking them, usually anywhere from $0.25 to $2 a survey.

Market research is a big deal these days. Companies want to know as much as possible about consumers and through paid surveys is how they get a lot of this information. So this is how you make money from them in the first place, the companies pay the survey sites and the survey sites pay you as a small incentive to take the surveys.

But Survey Queen is NOT your typical paid survey site.

I first got a hint that this was the case after scrolling down a bit on the homepage and seeing a bunch of other sites being promoted. You can see in the screenshot below that for some reason they are promoting Best Day Ever, Survey AllStars, and Inbox Pays. 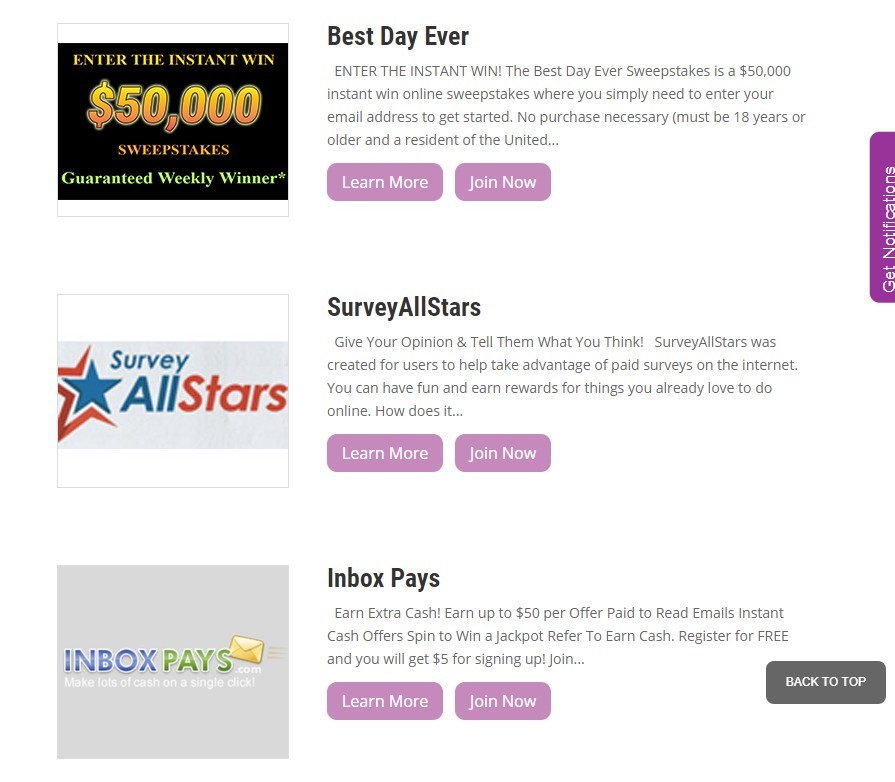 I thought I was going to take surveys and make money… Not join other survey sites?? And besides, Best Day Ever isn’t even a survey site. It is a sweepstakes site.

But anyways, I saw in the top menu there is a link for “all surveys” so I decided to click it and see what they have to offer… 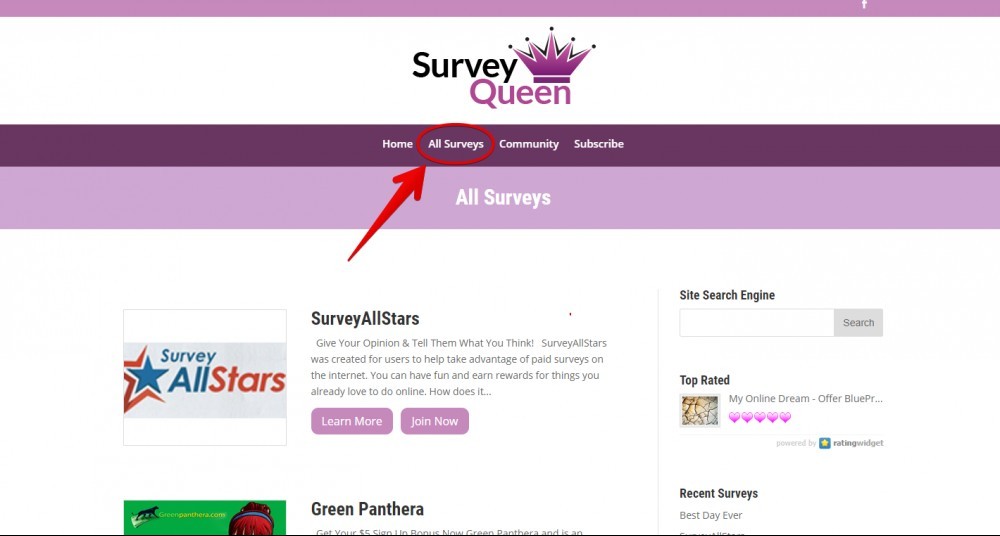 Unfortunately it was the same sort of deal. They just provided me a list with a bunch of other paid survey sites along with some sweepstakes sites and others mixed. The list they gave me included…

There was also a link on the top menu for “community”. I checked this out and it was just to some Facebook page that was not up-to-date and I saw no point in joining.

Basically it is a Facebook page (which isn’t even called Survey Queen) that promotes paid survey sites, just like they are doing on the website here.

The the only other link at the top menu was to “subscribe”, so I decided to check it out. Here is where they said I could “make $100+ sharing your opinion”.

Of course this is not necessarily a good thing. Making $100 or more sounds great, but what if it takes you 500 hours to make that $100 or more? That would be pretty horrible right? 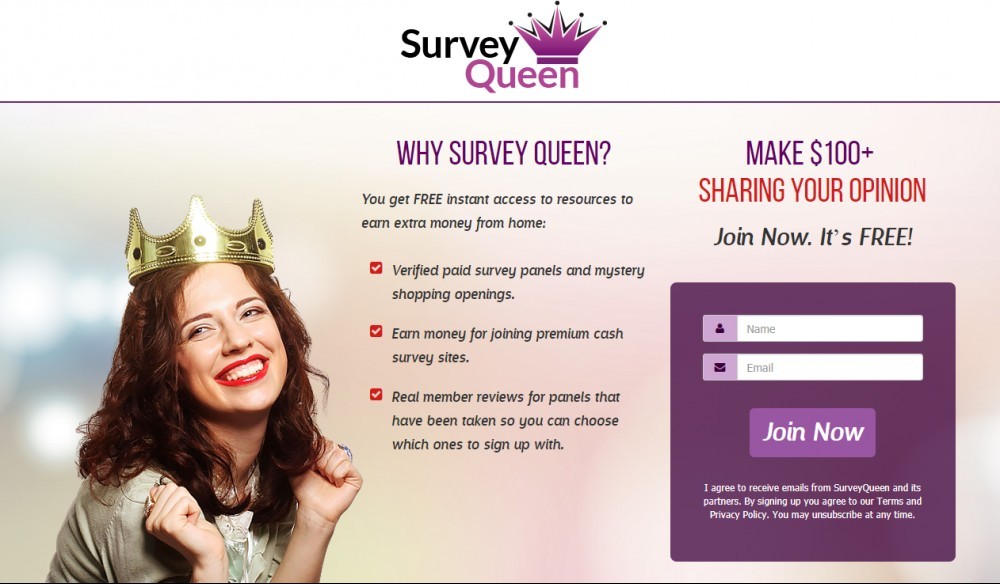 One thing that I want to point out is that after I entered my name and email address, up popped a bunch of promotions. There were promotions for newsletters, email alerts, job alerts, health insurance and more… 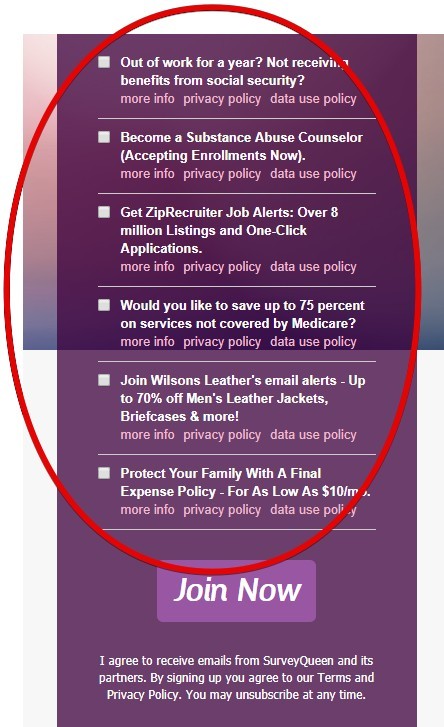 And below the “join now” button there was small print that says you agree to receive emails from Survey Queen and “its partners”…. But more on this in a second.

After clicking to Join Now I was then redirected to the page you can see here, which says that I start making money in 3 easy steps… 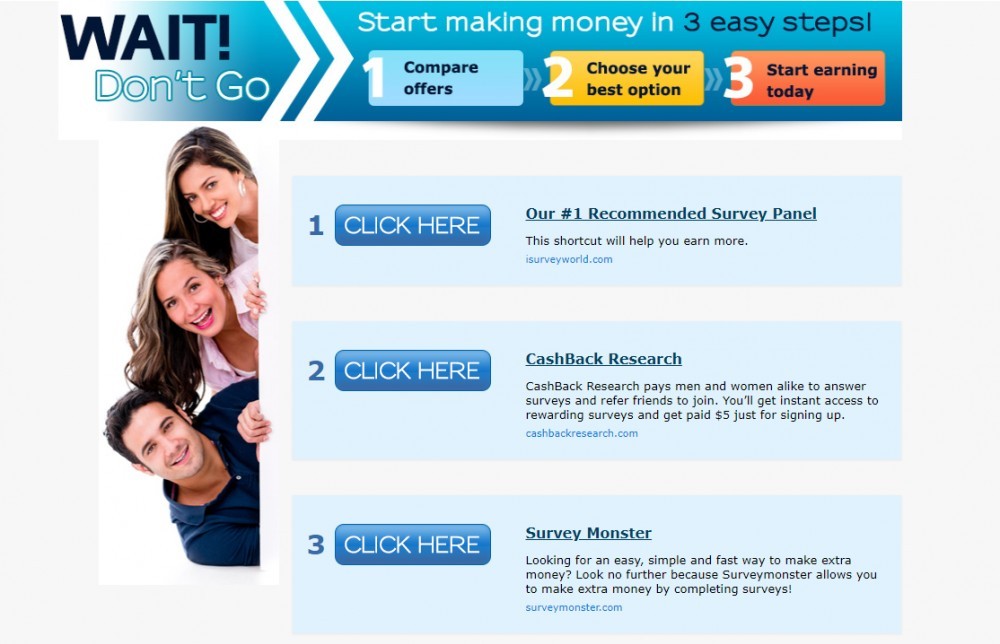 And guess what? That’s it!

That is all this place has to offer. On the page you can see pictured above there was nowhere to go any further. This was the end of the line. They presented me with a list of paid survey sites, for like the 4th time, and I could either join them or leave.

There was no step number 2 or anything like that.

What Is Survey Queen Really?

This place isn’t much, I’ll tell you that.

The only thing this place does is refers you to a bunch of other paid survey sites and similar sites, like sweepstakes sites, product testing sites, etc. Along with that they also try to get you to take up offers that are completely unrelated, such as getting life insurance (which was promoted when I first entered my information to join).

This is not the paid survey site that I was expecting at all.

There is absolutely no value here and no point I see in joining this place. For some reason I have been coming across a lot of really crappy sites like this lately. In fact, I just reviewed a place called Survey Monster recently that was the same type of deal. And I’ve come across others, like My Survey Jobs, in the more distant past.

These places just sucker people in just for the purpose of making as much money off them as possible.

There is absolutely no reason I see for anyone to join this website, unless of course you want to get a bunch of spam emails in your inbox. This is the only thing that is going to come from it if you do join, because remember, you have to agree to receive emails from their “partner” sites, and we have no idea what all this includes.

If you do actually want to make money taking paid surveys online, then I would suggest trying a well-known and trusted survey site like Swagbucks. They have been around a while and offer a variety of easy ways to earn some money.

That said, you should know that paid survey sites like this pay out very little. They are best for earning a bit of extra pocket change in your spare time, but not much more than that. If you want to actually make good money in your spare time online, I would highly suggest taking a look at how I went from $0 to over $6000 a month working online for myself.