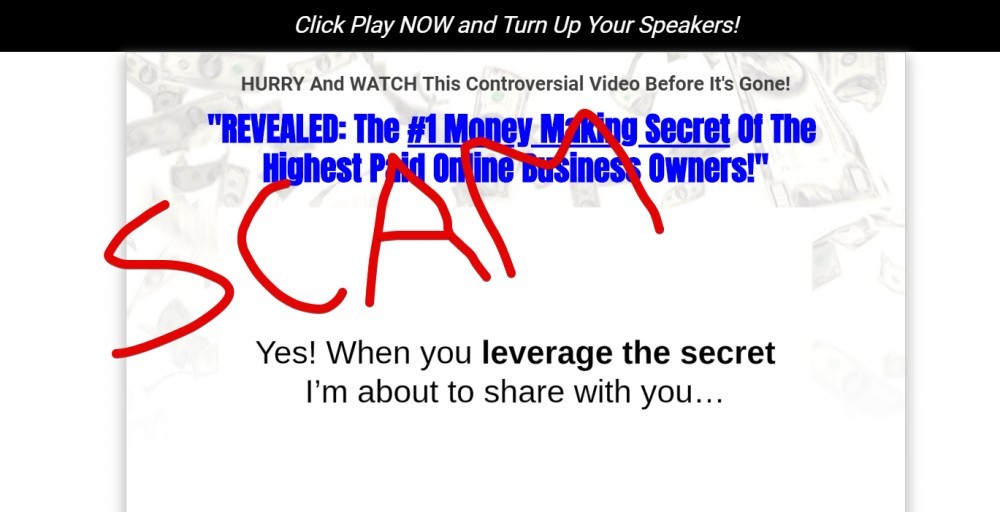 The Ecom Freedom Blueprint Scam – This Isn’t What You Think!

Is Teo Vee’s new program called The Ecom Freedom Blueprint a scam? Ya… pretty much it is and you will see why.

The guy tells you that this is pretty much your one-way ticket to financial freedom, being able to earn money on autopilot from your very own e-commerce store… But of course things are not always what they seem and you definitely cannot trust everything you hear online.

I’m guessing you probably came across one of the video presentations and thought that it sounds a little bit too good to be true. Luckily, you took the time to do a little bit of extra research, which you always should do, and ended up coming across my review here.

And… It’s a darn good thing you did because this “The Ecom Freedom Blueprint” is NOT what it seems to be.

Teo Vee acts like this is all a walk in the park, like this is some sort of system that you can just “plug into” and get fast results with, like it is some “secret” formula or something. He tells you that you can get predictable and reliable sales day after day using the system and that other people are making tons of money with it, but I’m going to show you what’s really going on here.

There are several different video presentations that funneled people into the system. I’ve come across 3 of them which I took screenshots of that you can see here… 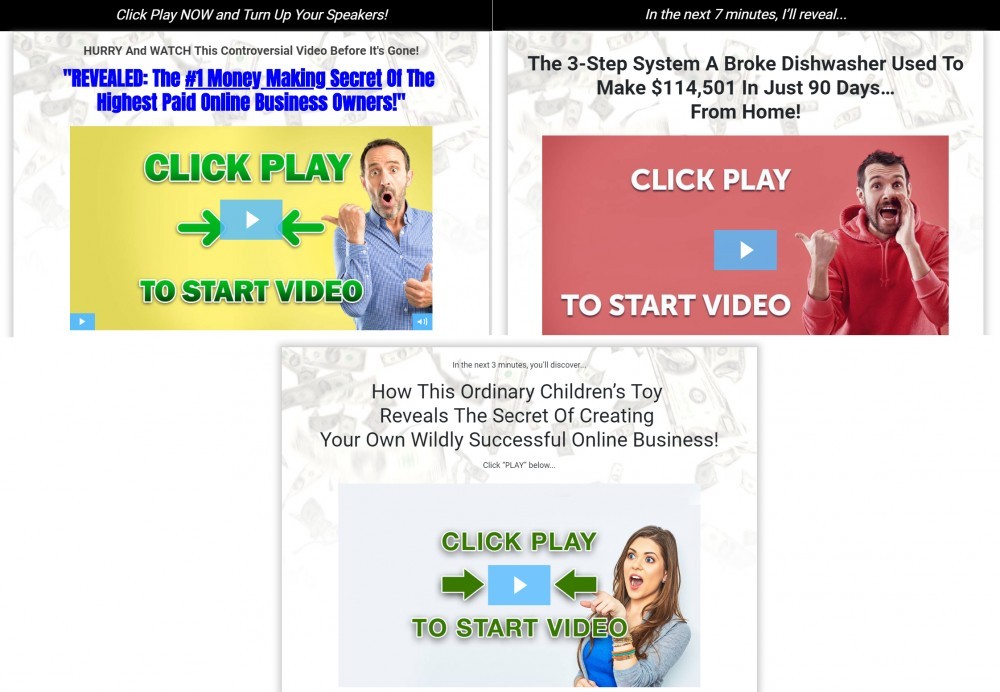 All 3 of these sales funnels have a different starting point, but they all lure people into the same thing, which is The Ecom Freedom Blueprint.

As you can see above, the one video is about the “#1 money making secret”, another is about a “broke dishwasher… made $114,501 in just 90 days”, and the other is about some children’s toy that holds the secret to successful online business.

These sales pitch is are very over-hyped and who knows what you can actually believe. Most of the information provided in them is probably just made up.

Teo Vee acts as if this is the greatest system to have ever been invented and claims that is super easy. I don’t know if he said this in all of the sales videos, but in one of them that I watched he claims that it only takes 3 simple steps, which include…

What he tells you is so misleading it’s hard to believe. It makes you think that this is some sort of done for you system that is just going to start cranking out cash after you buy into it, which is completely untrue.

Too good to be true?

Ya… Obviously this is too good to be true and I’m sure that you had your suspicions of this already.

I’ve actually reviewed some sales pitch is from this guy in the past which have gone along similar lines. There usually extremely over-hypes, very misleading, and just overall very “scammy”. They lure people into something that they really don’t know what they’re getting involved with by use of deceptive and misleading information.

One of the sales pitches I reviewed in the past from this guy was called the Click and Flip System and basically he was telling people that you could make tons of money online by simply clicking your mouse. Now I guess this is true to some extent, because if you are going to be working online your definitely going to have to click your mouse, but obviously this is an extremely misleading statement that really gives people the wrong impression.

Who Is Teo Vee?

Well… In the one video presentation he claims that he used to be a broke dishwasher with no experience at all who then went on to make $114,501 in just 90 days of using this system… But who knows how true this actually is.

It seems like a lot of what he says is just a complete lie.

What I can tell you about this guy is that what he is most known for in the online world is his ecommerce training called My Ecom Club. In fact, this it is all I know him for and I know he promotes the heck out of it.

He is pretty well known in the online marketing world as being one of the marketers who’s products you probably don’t want to buy. Most people who buy them just end up disappointed and feeling scammed at the end of the day.

Something else I can tell you is that the guy actually speaking in the video presentations is not actually him, that is a paid spokesperson. I know this because the real guy has a strong accent, as you might be able to guess from his unusual name.

What Is The Ecom Freedom Blueprint Really?

I should have known before even looking into this.

Sure enought… The Ecom Freedom Blueprint is just another sales funnel to get people to buy into his My Ecom Club program that I mentioned above.

After watching one of the video presentations for this “system” and clicking to buy it, you are directed to the order page which you can see here… 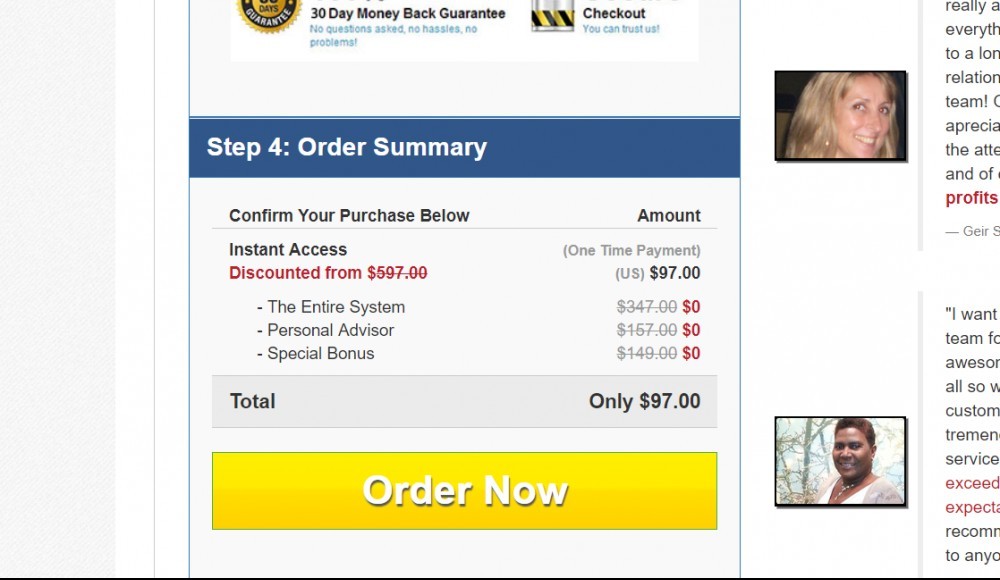 As you can see there is no mention of any name. There is nothing that says My Ecom Club or anything. This is the type of marketing stuff I do not care for. People are being lured in and don’t even know the name of the darn product they are buying.

The initial price is only $97 or $47 depending on what sales funnel you go through.

But that is far from the end of it. If you do buy in you will get hit with a series of upsells, one costing $1,997!

So what you are getting if you buy in is My Ecom Club. And My Ecom Club is basically an educational platform that shows you how to build an ecommerce business, specifically focusing on dropshipping and using Shopify stores.

Basically how this works is you would set up a Shopify ecommerce store and load it up with products. You don’t actually need any products as inventory because you are dropshipping. What this means is that when someone buys a product from your store you then order it directly from the manufacturer and have it shipped right to them.

This is actually a pretty popular business model and is something I have personal experience with, but it certainly is not as easy as you are led to believe.

Besides the core training you are also upsold on a personal advisor for $37, which isn’t bad, and also a “done for you” package for $1,997.

I’m not entirely sure what the “done for you” package includes but supposedly they basically give you a pre-built ecom store already loaded up with products. I’m not sure if this also includes pre-made marketing campaigns or anything like that though.

It’s Not Nearly as Easy as He Makes It Seem

While there is definitely tons of money to be made in e-commerce, this is not even close to being as easy as he makes it seem. I know you are probably already thinking this, but I just want to really make this point known.

I was involved in e-commerce and did drop shipping for around 2 years. I had some success with that but also a lot of failure. You can’t just expect to start selling products like crazy right from the beginning. You’re going to have to go through a lot of testing to find the right product, the right audience, and winning ads.

Even if you by the “done for you” package for $1997 I doubt you are going to have success right away. You can have the most beautiful Shopify e-commerce store in the world, but if you don’t market products to the right targeted groups of people, it simply isn’t going to work out very well.

Tons of Complaints with the BBB

You should also be aware that there are plenty of complaints from other people who have bought into this My Ecom Club and are thoroughly disappointed. I was able to find a fair number of complaints on the complaints on the BBB website, some of which I took a screenshot of so that you can see them below.

There complaining about simply failing after going through all the training and not getting refunds, being pushed into the expensive $2000 upsell, and so on… 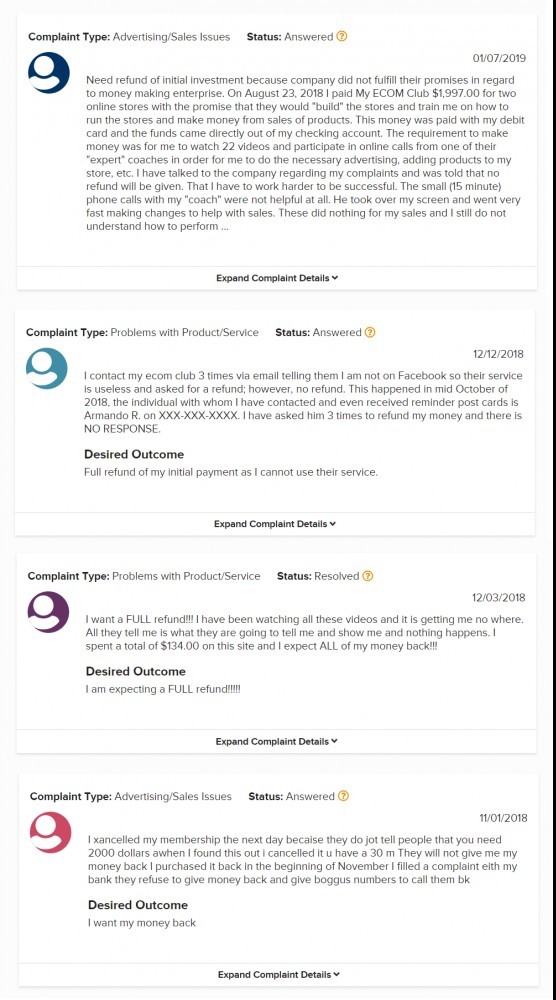 One thing is for sure… The promotional material that is used to lure people into this is incredibly misleading. Now whether you consider it a scam or not is a different question. The bottom line is that Teo Vee does indeed provide a fair amount of value in the My Ecom Club training, HOWEVER people are given the wrong impression when they are joining and don’t really know what they’re getting involved with. They think is going to be some super easy “plug and play” type of system but the reality is that it takes a lot of work and most people fail.

Personally I am not going to be recommending this to any of my readers because I don’t care for the marketing tactics behind it and I also think there are much better options out there.

The Ecom Freedom Blueprint is obviously just a made up name that is part of a misleading marketing tactic which deceives people. I did call it a scam in the beginning but of course this is just my opinion.

One thing that he also is not tell you before hand is that when you create an e-commerce business like this you are going to have to drive traffic to it via paid traffic sources, like Facebook advertising for example. This is another expense that can become an easy way to drain your wallet fast.

There are better much less risky and more affordable options out there. For all the beginners out there I would suggest taking a look at how I went from $0 to over $6000 a month doing something that requires little to no startup cost and that you don’t need to mess with paid advertising for.