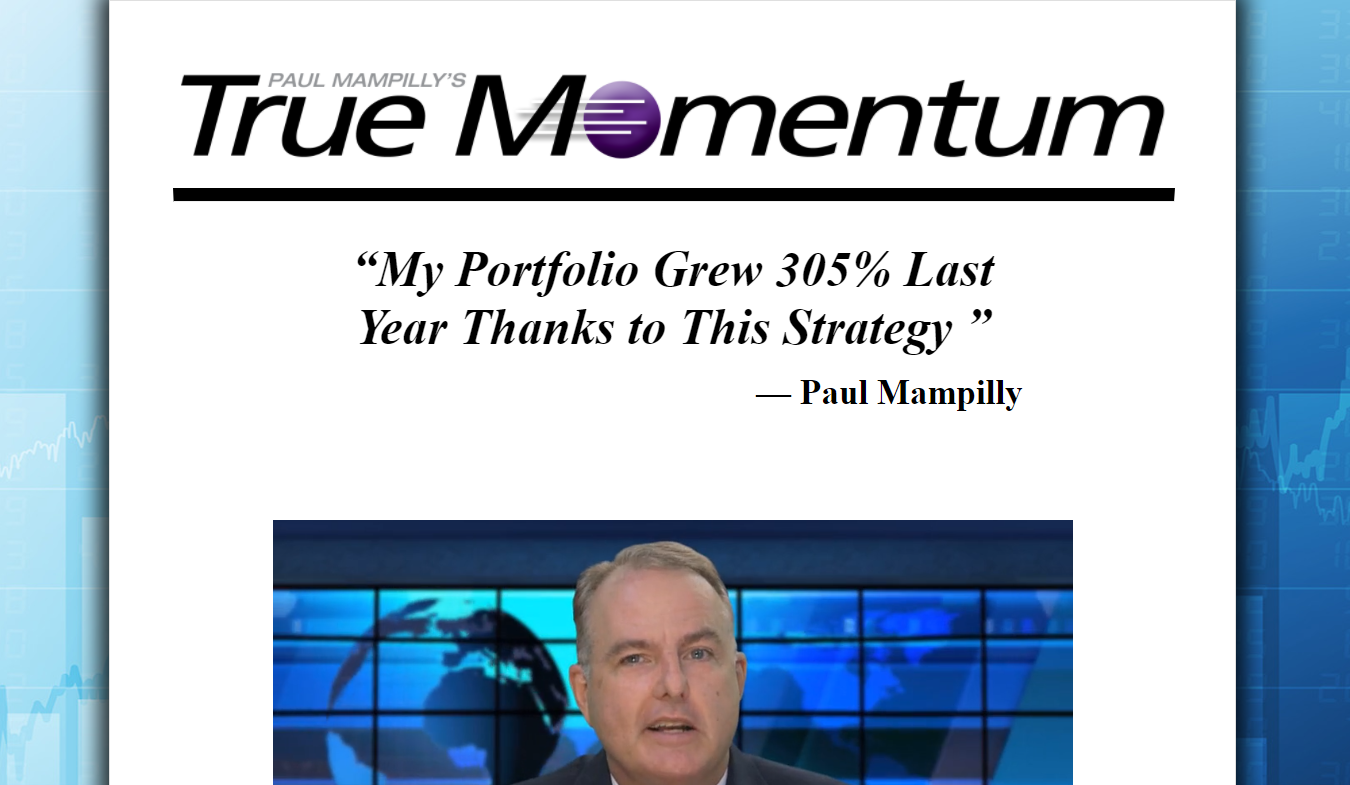 Is Paul Mampilly’s True Momentum a Scam? – My Opinion of It

Paul Mampilly’s True Momentum strategy is claimed to be able to make you a 300% return on your portfolio within in next year… but is this really true? Is True Momentum the exclusive investor knowledge that you have been waiting for or is this all a bunch of bogus? Is True Momentum a scam?

In this short review I’ll be going over what True Momentum is, what you get with it, some misleading information that is on the sales page, complaints and more.

The first thing that I want to make you aware of is that the sales pitch being used is misleading. This doesn’t mean that True Momentum is a scam, but it is something you should know about that they aren’t going to tell you. And by the way, this isn’t a scam as much as it may seem to be one.

Disclaimer: Much of what is said in this post is my opinion. You should still do your own research and form your own opinion.

One thing that I don’t like about all of this is the misleading sales tactics used. This products is really hyped up and the sales pitch is just too “salesy”. It reminds me of the sales pitch for the Altucher Report or Freedom Checks or maybe like going to a car dealership and having the salesman tell me about how amazing everything is.

In the sales video that I watched (there might be others), the spokesperson was talking about how Paul Mampilly was making ordinary people a bunch of money and went through multiple slides of people that had supposedly been successful. They mentioned these people’s first name and even put images of them in the presentation.

The problem here is that the images are completely fake… which leads me to believe that the information given is also fake. As you can see here… this guy named “Lars” who supposedly made $23,000 in 12 months might not even exist. I did a search for the image used and found it is just a stock photo that anyone can purchase online and use… 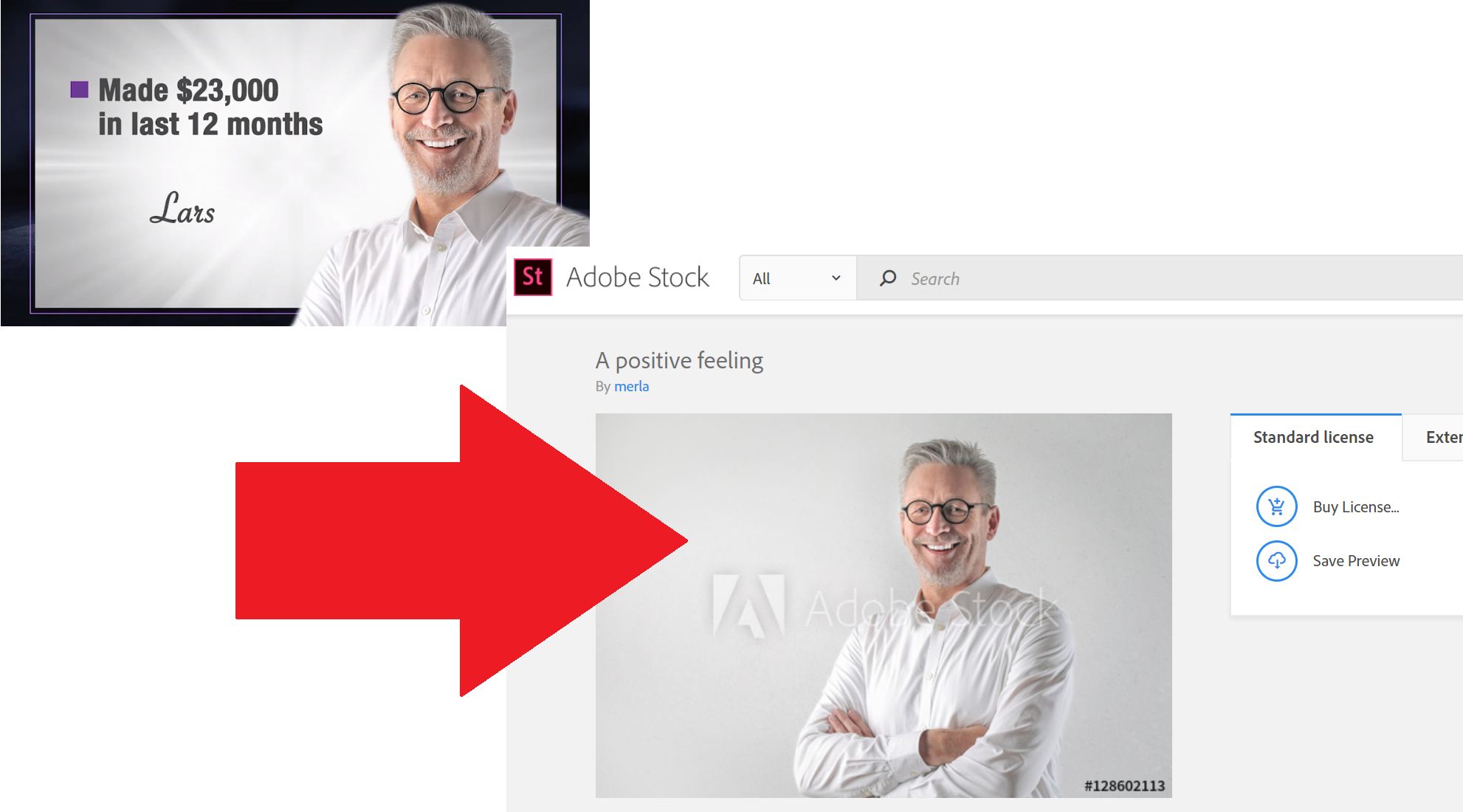 Also the next guy in the sales video that was presented was “Mike” who supposedly made $26,000 with this. I wasn’t able to find the exact site this picture came from but I did find it on multiple other sites for businesses, which suggests its also a stock photo… 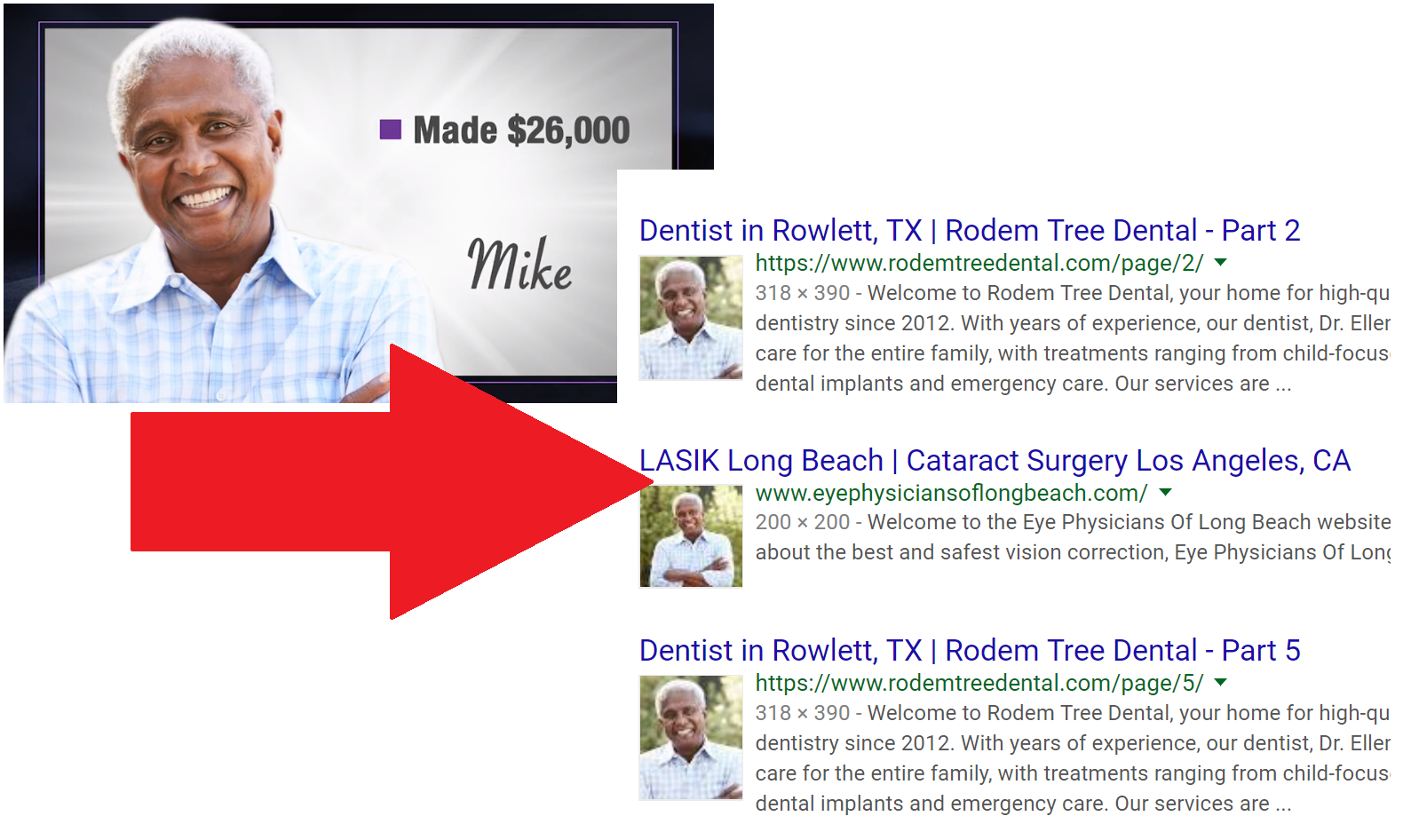 And the list goes on. All of those people presented have fake images. The spokesperson claims some of them are making over $100,000 a year with Paul’s stock picking advice but who knows how true this is.

I’m definitely NOT saying that this proves True Momentum to be a scam but it does make me more suspicious and trust what is going on less than before. This is not a way to gain someones trust.

Another scammy sales tactic used was the fake live stream. After showing all the fake images of people that supposedly made money with this they tell you that Paul is coming on Live  in a couple of minutes to make a “major announcement”.

This “live” stream is fake as can be. All you have to do is pause the video to see this.

How Can He Predict The Future?

Of course the “major announcement” that Paul makes “live” is to give people a chance to grow their account “a minimum of 300% over the next 12 months”.

And of course what is being pushed here is the product… True Momentum.

This was all just one long-winded sales pitch.

What is True Momentum?

True Momentum is the name of Paul Mampilly’s strategy he uses for picking stocks that have the potential to increase by 100% or more in price over the next year. He claims that only about 24 stocks have this potential per year and that he is able to find them.

He ignores what most people listen to, such as the media and technical indicators. He looks more deeply into projects that have went down a substantial amount but that he thinks have the potential to bounce back. These stocks usually have fallen on hard times.

His True Momentum strategy is not dependent on stock price, size, or market sector.

One thing that he claims he is going to give you is an “explosive stock” that “has the potential to make you 100% in the next few weeks alone”. However, I have some serious concerns about this…

My concerns are this: The sales video is pre-recorded and has been up for months, yet this same saying of giving you this “explosive stock” is still being said. So how can this work? He says it has the potential for 100% returns in the next few weeks yet he was saying the same darn thing over a month ago. Over-the-top sales tactic to get you to buy in maybe?

But anyways…. here is what all you will get if you buy a subscription for True Momentum…

So in a nutshell what you are getting is advice from Paul. He gives you access to see his portfolio and gives you detailed recommendations on what to do. Ultimately it is up to you what you are going to do or not but he gives the advice.

All the stocks that he recommends in this newsletter, or whatever you want to call it, he claims to expect to see 100% growth or more in the next year.

The price might change but right now as I’m writing this True Momentum is listed at $1,995 for a yearly subscription. They claim that is 60% savings which is quite a lot but who knows how true this is. Could be just another common sales tactic.

As far as complaints go there isn’t much to talk about here. You will find people complaining online that a stock he picked didn’t work out but this comes with the territory. Paul does have a good track record but he does pick bad stocks at times too. That is why you shouldn’t enter the stock market at all or invest any money you can’t afford to lose.

Most of the complaints I’ve read come from subscription problems such as being overcharged, not being able to cancel, and things like this. But this doesn’t have to do with True Momentum. This has to do with the publisher Banyan Hill.

Can You Trust Paul Mampilly?

The truth is that this guy is who he says he is. You probably wouldn’t expect this based on the over-the-top sales page. You might think he is a scammer or such but he really is the ex-Wallstreet money manager that he claims to be.

I’ve looked into him before when I was reviewing his Profits Unlimited program so I already knew who he was and a good bit about him. He’s been around for a while and does have a good track record with stock picking. He has managed large mutli-million dollar portfolios and did win that competition by the Templeton Foundation in 2008 that he mentioned in the video.

All in all he seems to be someone you would want to listen to which is why I don’t get why he is selling his products so hard.

Final Thoughts – Worth It or Not?

This really depends on your situation and your take on the whole thing. A lot of people like Paul and respect his work but there are a lot of people out there that call him a scammer as well.

True Momentum would only be worth it if you have some money to invest though. Just think about it. The subscription for a year costs about $2,000 and Paul claims he will be able to get you a 300% return over the next year, which I have no idea how he can predict by the way. So you would have to invest about $666 just to get your $2,000 investment back for the newsletter.

Invest if you want to but I’m not going to tell you to or not. I would also suggest doing your own research on this.

On a different note: Since you are looking to make money I also want to throw out there this program which I recommend. I’ve been a member since 2015 and make a living working online with it. You can read more about this here.