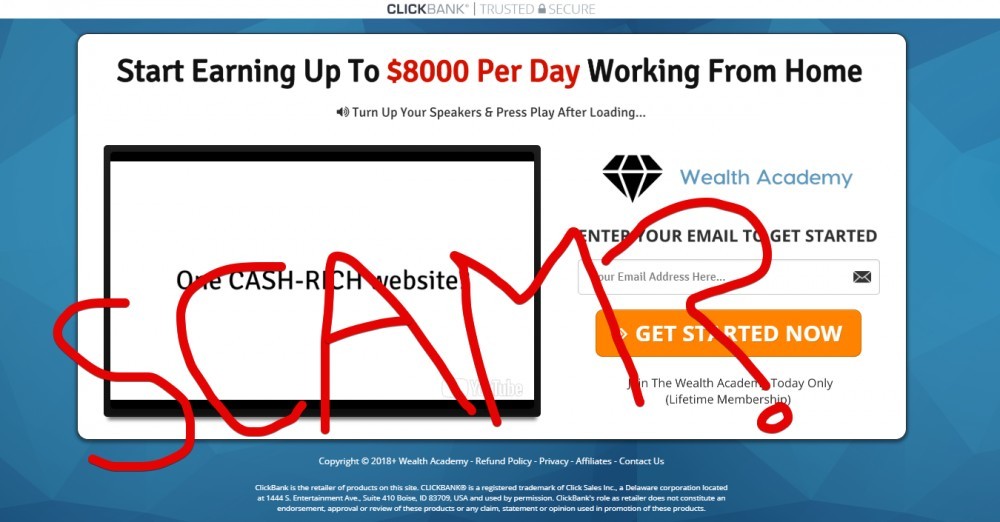 Wealth Academy supposedly some brand-new incredible way to make money online with a “cash rich” website. In fact, Richard, was the creator, claims that start seeing results “immediately”… However, I am very hesitant to believe these claims.

Can you really trust what this guy is telling you, especially with all the online scams out there? Is this really going to be your ticket to financial freedom, or is it just going to be a way to quickly drain your bank account? Is Wealth Academy a scam like Explode My Payday and YT Crusher (which I recently exposed)?

Lucky for you, you decided to do a little research and came across my review before buying into this program, or “Academy” as he puts it. Well… At least I hope you are reading this before buying in, because if not you are likely going to end up discouraged. Wealth Academy is not to be trusted as I will show you in this review. This place is more than likely a scam.

Richard claims that there are thousands of people that are tapping into this “highly lucrative website”, which you later find out is Amazon, if you watch the entire video presentation.

You probably reading my review now because the opportunity sounded a little bit too good to be true. Richard tell you that you can start seeing results immediately and that many people using the system are making $1,500 – $3,500 and even up to $8,000 per day one heck of a lot of money.

He claims that this system he put together somehow “exploits” traffic coming into Amazon, however, as I will go over soon, this is a complete lie. But before I get into that, I first want to go over some of the red flags that caught my attention which you should be aware of.

When you come across the system that is promoted as a way to make insane amounts of money online, you should always proceed with caution. Sure… This doesn’t mean is a scam for certain, but it definitely should raise suspicion.

This guy says his name is “Richard”, but I am hesitant to believe any of the story he tells you. He claims that he was laid off from work and ran into some coworker at a lunch place across the street… Where he was told about some secret website you could leverage to make money via affiliate marketing. Supposedly this guy gave him a step-by-step blueprint to make money with affiliate marketing and he all of a sudden started making money the next day with it.

However… How can we trust anything this guy says? The answer is we cannot. There is no verifiable information given, no picture of Richard shown, nothing at all that can prove this to be trustworthy. This is exactly how it is supposed to be. The people behind this scam made sure of it.

And don’t think that this sounds a little bit “out there”. Review scams all the time in the are often promoted under fictitious characters that were completely made up.

#3 – Requires Little To No Work

One thing that caught my attention is the very low price for this Wealth Academy. He claims that he could easily sell this for $6000 but just wants to help people out because he can’t stand seeing people struggle, which honestly sounds like a bunch of balogna to me.

Now the low price may sound awesome to you, but it usually means there is something else brewing behind the scenes. I was suspicious right away, and rightly so because I found out there are three upsells for hundreds of dollars, which include…

What You Get With Wealth Academy

What you get supposedly affiliate marketing training. Mentions that in the training helps you find good products to decide. He also claims to provide insider secrets when it comes to picking Amazon niches.

The traffic training he calls “traffic fallout” and he claims that this training is focused on evergreen free traffic methods, which there is a problem with as I will go over shortly.

All in all, I don’t really know exactly what all you get with this program because he doesn’t really say much, which is typical of a crappy program that once you to buy in before realizing what you actually bought into.

Why This Will NOT Work As Stated

He claims that you will be able to earn very large commissions from Amazon, all thanks to the free traffic methods and the premade websites that this system will be setting you up with. However, much of what you are told is a lie and will not work out.

One of the major reasons why this will not work out as expected, or how you are told, is because there is no way in heck you are going to be making $8,000 per day as an Amazon affiliate. In fact, very few people make this much with Amazon. The reason for this is because Amazon’s affiliate program pays extremely low commissions… Usually ranging from 4 to 6% although you can earn as much as 10%.

Compare that to some of the other affiliate programs out there that pay up to 50% and higher. 10% is the best you can get with the Amazon affiliate program and this percentage is not even something you can count on getting very often, depending on what type of products you are promoting.

If interested, you can read my review I wrote of the Amazon affiliate program, which is called Amazon Associates.

#2 – You Have To Get Your Website Approved… Which Takes Time

Another reason why this will not work out as you are told is because it takes time to get approved with the Amazon affiliate program. He makes it seem as if you can join this Wealth Academy BS and start making money by today… Which is complete BS.

Amazon has to approve of your website before you can start promoting their products and earning commissions. I don’t remember exactly how long this takes, although I went to the process years ago, but it definitely takes longer than a day.

There is also another major problem with this website approval process that I will go over in #4.

Not only is this a complete lie because of what I just explained above, having to get approved through Amazon and all, but there is also no way you are going to be making this much with free traffic methods.

Now I don’t know exactly what type of free traffic generation methods you will be learning in this program, whether it be SEO, social media marketing, etc.… But I sure as heck know that you won’t be earning anywhere even close to $8000 by today. This is just a ridiculous claim and anyone who has been involved in online marketing for some period of time will tell you the same.

He mentions that you do not have to build a website when you join Wealth Academy because they do it all for you. What this means is that they will likely set you up with some “cookie-cutter” website that is nothing special. The problem with this is that there is a good chance you won’t even be able to get accepted into the Amazon affiliate program… Because they can be pretty picky at times with which websites they allow to join and promote their products.

As a full disclaimer, I have not actually bought into Wealth Academy so I cannot dive deep into the training and tell you exactly what is going on here, but I have reviewed enough scams and I have been involved in online marketing long enough to know that this is one of them.

We have no idea who this “Richard” character is, there is very little information provided on what you actually get with Wealth Academy, there are ridiculous and extremely misleading income amounts thrown at you to get you all excited, and just about everything smells like a scam here.

Of course you can buy into this if you would like, I am certainly not going to stop you, but this is definitely not something I would recommend to any of my readers.

If you are a beginner looking to make money online, then I strongly recommend reading how I went from $0 to over $6000 per month online… In which I will explain exactly what I do, how it all works, and how beginners can get started doing the same.

Please leave any questions or comments down below and I’ll get back to you as soon as I can 🙂 Also, if you purchased Wealth Academy yourself, I would love to hear what you think about it down below.