If you are looking to make a little bit of extra money on your phone or other mobile device then Zap Surveys app is one of the options that you have. But is this paid survey app a good option? Or is Zap Surveys a scam that you should avoid?

There are plenty of different paid survey websites and apps out there that you can use to easily make a bit of extra money, although not much. The point is… There are a lot of options and you definitely are not forced to to join Zap.

In this review I’ll be going over how Zap Surveys works, which includes all different ways you can make money, how you receive your payouts, complaints and more.

Zap Surveys is a free application that can be downloaded to any iOS or android device in which just about anyone can make easy money taking paid surveys. Unfortunately there is no website interface, which means that you cannot take surveys through them on a desktop computer… You have to use the app.

That said, the app is well put together and is very easy to use. No one should have a problem navigating around the app and doing whatever they need to do.

All in all this paid survey app isn’t anything amazing when it comes to making money. Sure… It is easy to make money taking paid surveys, but you will not make much for your time. However, on the upside, Zap Surveys actually donates money to help and child starvation across the world for each bit of money that users earn taking surveys on the app. This is something you certainly don’t see all too often and I’m a fan.

When you first join this is when you are going to get rewarded the most. They reward you very generously for the first survey that you complete, which is your profile survey. But don’t get too excited yet… You will earn about $6.25 for the first survey, which is only around 10 minutes, but you will not be able to cash that money out right away.

You see this pretty often with paid survey sites. They give out a little bonus in the beginning to give people more of an incentive to join in the first place.

The first survey that you will take, as I said, is a profile survey. You will have to fill out information dealing with your demographic, such as income level, age, gender, education level, etc. If you fly through this survey you’re going to regret it. It is important that you fill out this accurately because they will use this information to match you up with surveys that are a good fit for you.

Anyways…. After doing the initial profile survey you will be able to select from different survey providers and will be taken to their available surveys. Zap Surveys is partnered with brand research companies such as Tap Research, SaySo For Good, and Peanut Labs… 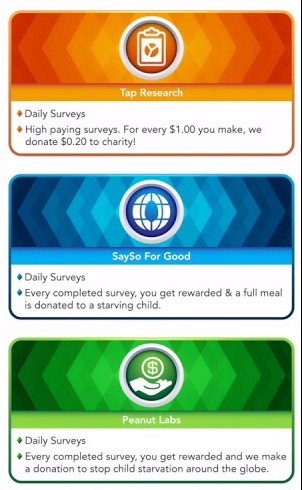 Each of these brand research companies are pretty typical. In fact I am familiar with all of them because I have seen surveys put on by each of these guys on other paid survey sites, such as Swagbucks. None of them are amazing, but they are all legitimate and will pay you.

What you can expect from each of them includes the following…

One thing that is really nice about the Zap Surveys app is that you can see ratings that other survey takers have left for certain surveys. This way you will be able to avoid surveys that are maybe not worth your time at all, or the just have a bad rating for one reason or another. Besides survey you also be shown the estimated time and the amount of money you will earn from completing it.

The app also has what they call “location rewards”, which is when you get rewarded just for being near or in certain stores.

Zap is partnered with a bunch of different stores/restaurants and they help them advertise promotions that are going on. So when you are near a store/restaurant that has a promotion going on, Zap will notify you and all you have to do is open up the notification to get your reward, which is $0.25.

It is not much money, but you literally just have to look at the notification… You don’t have to act on it. Also, you don’t actually have to have the app open to receive these notifications which makes things a bit easier.

Some of the different stores/restaurants that you may receive notifications from include Walmart, Home Depot, McDonald’s, and many others.

Oh… And by the way, you need to allow the app to track your location to be able to receive these location rewards.

Other Ways to Earn

Some additional ways to earn include…

Once you reach the $25 minimum you will be able to receive your money via PayPal or Amazon e-gift cards.

“No Surveys Available In My Location”

I was reading through bunch of comments/complaints about this app and saw quite a few people complaining about not having any surveys in their location. This is because brand research companies only look for people’s opinions in certain areas, where the brands they are conducting research for are more heavily marketed.

So if you live in less developed areas, you may not receive many survey offers.

With a Cash Out minimum of $25 I knew that they were going to be people complaining about this. Every survey site has a minimum Cash Out amount, but $25 is pretty darn high and it will take you a good chunk of time to reach this minimum.

Getting disqualified from surveys just comes with the territory. You will see complaints like this for every single paid survey website out there.

The likelihood that you will get disqualified depends somewhat on the survey provider. Peanut Labs, for example, offers fewer surveys but they are more targeted, whereas Tap Research offers a lot more surveys but there are ones that are more untargeted and you stand more of a chance of getting disqualified from one of them.

If you are looking to take a survey from Tap Research make sure you filter the surveys by “best match”. This will bring up the surveys that are the best match for you first.

Also, as I mentioned earlier, the more accurately you fill out your profile the less likely you are to disqualify from service.

Not Many Ways To Make Money

Another downside to this app is that there onto many ways to make money. Besides taking surveys, you have the location rewards but that isn’t going to earn you much, nor will anything else. There are other paid survey sites out there that will pay you to do a number of different things, such as surfing the web, playing games, etc.

Okay… So is Zap Surveys a scam? I hope you can see by now that is definitely not a scam. This is a legitimate survey app and you really can make money taking easy paid surveys through this app. However… Just don’t expect to make all that much. I find the reason that some people are calling it a scam is because they are disappointed in how much they make, but I know that you can expect much from paid surveys in the first place.

Overall Zap Surveys is a nice little app that you might want to give a try, but when it comes to taking paid surveys like this I would probably recommend Swagbucks or Fusion Cash first. They have both been around for a while and offer more opportunity to earn money.

I have been making money online since 2015 and make a heck of a lot more than I ever would be able to taking paid surveys. The reason I am telling you this is because what I do is something that can be done in your spare time, just like paid surveys, so I figure some people might be interested.