Why Instant Email Empire is a Scam by “Bobby” – So Many Lies.. There is this new system being promoted by a guy named “Bobby” called Instant Email Empire, where you can supposedly get a copy of his email marketing system and make $125 per day with extremely little work. But… Of course you can’t always trust what you hear online and I’m not the only one who was suspicious of this place the second I came across it.

Is this the real deal? Is this just another scam? What’s really going on here?

In this quick review I’ll be going over what you really need to know, which is basically that this system is not as it is said to be… And I would definitely recommend avoiding it.

The second I landed on the website there was a video presentation that started out with a bunch of news clips about work at home jobs. The funny part about this is that, while these news clips were completely real, they had absolutely nothing to do with this Instant Email Empire system. They were probably just put there to try to make the opportunity seem more credible than it really is.

Another thing that I noticed right away is that the numbers weren’t really adding up. This guy claims that he is a millionaire from email marketing, yet above the video it states “see exactly how I earn $125 a day sending simple emails from home!”… And obviously making $125 a day, is nice, but isn’t going to make you a millionaire.

Those are just two red flags that, my attention right away, but there are many others, like for example what the heck this guy is sharing this opportunity in the first place.

Why would he want to tell other people about this opportunity?

What he says is that he needs help sending out emails, because he just doesn’t have the manpower to do it all on his own and it works better with a bunch of partners.

He claims that email services, autoresponder is in particular, would rather have a bunch of smaller accounts sending out emails than one massive account. However, this doesn’t really make much sense to me and I have never heard of this being true before. As long as you pay them for their services, I don’t really think they care.

In another good question is why is he inviting me in particular to join this system?

Who is this “Bobby” guy?

One thing is for sure, this “Bobby” guy definitely likes to brag. In the video he talks all about how he lives in a big house, drives a Range Rover, Mercedes, Jaguar, and a Bently continental GT. He loves talking about how rich he is and of course says that he mentions all of this “not to brag”.

But the truth of the matter is that you can’t really trust anything this guy says… Because he is not who he says he is. I actually found out by reading another review that this guy is just a paid actor from Fiverr. This is not Bobby, it is some guy who anyone can paid to be the spokesperson for their video… 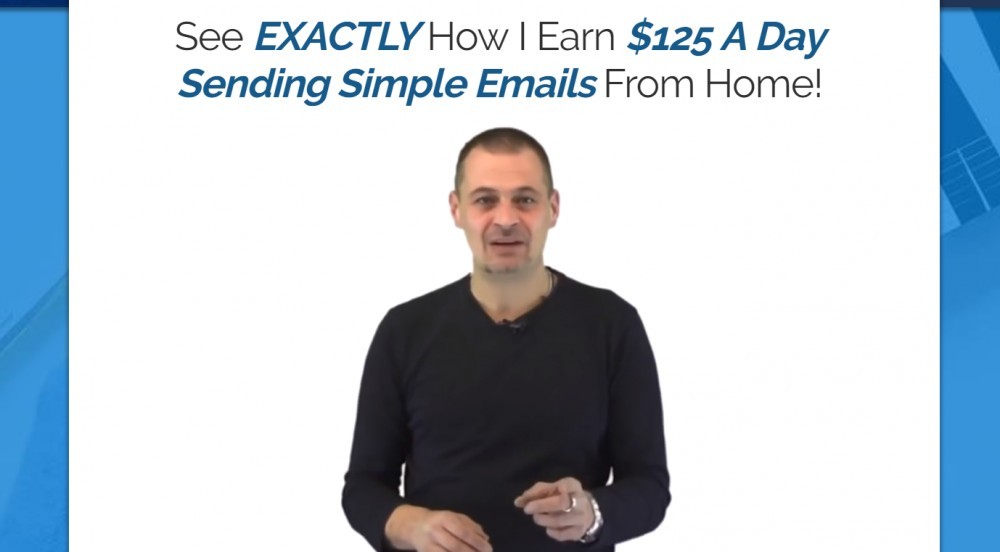 But just because this guy is in actor and is not who he says he is isn’t the end of the world, is it? I mean, maybe the real “millionaire” that is behind the system is just a little shy… Right?

At this point in my investigation I was definitely more suspicious than ever that this was a big old scam, but it is true that email marketing has a lot of money making potential so I decided to keep looking into it further

What Instant Email Empire Claims to Be

Instant Email Empire is your typical “copy my system” type of deal. There are a lot of scams out there that are similar to this and it is because everyone wants the easiest way possible to make money online, and what is easier than simply copying someone’s system?

You are told that this system is completely free and that the fake Bobby guy is going to partner with you and give you everything you need… Including setting up your email marketing account for you, loading it up with email subscribers, and even giving you the emails that he wants you to send out which promote products and earn you money.

If you fill out the information below the first video and proceed to sign up for this system, you actually find out that he claims to start you off with 5000 email subscribers, which is a heck of a lot.

Everything sounds pretty darn awesome, and this sounds like one of the easiest ways to make money that there is online, but of course things are not as they sound here… As the title of my post suggests, this is indeed a scam.

What Instant Email Empire Actually Is

Remember how the guy kept saying over and over again that this system is free… Yeah… Well… It is NOT free and after you enter your information and proceed to the next video you will soon find this out.

And there might be additional charges on top of this that I am unaware of, but I stopped my review after I found out that you have to buy into it, because of course I wasn’t going to buy into some system that just turned out to be a scam.

Plenty of red flags that tipped me off…

Besides those that I already discussed, there are plenty of other red flags pointing to this system being the scam that it is.

One thing that I always suggest one looking into systems/programs like this that are very suspicious, is to look at the disclaimer, which you can usually find at the bottom of the page somewhere.

Below you can see that the disclaimer here is actually for the wrong website, a website called dailycashsiphon.net… Which is weird because this is actually a scam that I have exposed in the past.

And you can also see that it states that the guy in the video was using a pen name, which proves true what I already knew. That said, it would also be nice if they would state that this guy is also a paid actor.

If you are looking to make money online, which I am guessing you are since you are reading this review now, then I would strongly recommend against a system like this. This is just another crappy system that is being promoted in a very misleading and deceptive fashion, filled with lies because it is in going to sell at all if they were just telling the truth.

If you want to actually make money then stick to something that actually works, I would suggest taking a look at how I went from $0 to over $6,000 a month working online.