CrowdProfits is supposedly some awesome opportunity where you can turn a $200 investment into a $4000 per week income. Well at least that is what you are led to believe, but is it really true? Is this the real deal or is Crowd Profits a scam that you should avoid? I know everyone is asking themselves this question… After all, it definitely seemed a little bit too good to be true.

But anyways… After coming across this opportunity I knew I had to do a little bit of investigating. I was suspicious from the beginning and was fairly certain it was a scam, but wanted to look into it further.

In this review I’ll be going over a few very important things that you are definitely going to want to hear, especially if you were thinking about buying into this… Because it is more than likely a SCAM as you will see.

When you land on the Crowd Profits website, the one I came across being crowdprofits.co, there is a video presentation that you can play.

The spokesperson says that making money online is all about timing and the jumping on a trend early on. He claims that used to will be all about affiliate marketing, setting up a blog, or becoming a YouTube star… But now these opportunities have already passed.

This is one of the first big lies that he tells you. Sure, there is definitely more competition than there used to be early on for all of these, but I actually make a living affiliate marketing so I can say from experience that this is definitely not true.

But anyways… He says the new trend is all about crowd investment, which are projects funded by potentially thousands of people. In in particular, this opportunity is all about crowdsourcing online advertisements, and he even claims that billion-dollar companies like Facebook and Google are running on crowdsourcing.

Crowd Profits supposedly mixes crowd investments with online advertisements and some people have supposedly been making $4000 per week with this from in an initial investment of only $200.

Legitimate? I think NOT, and I’ll be going over why. Let’s first start off with some of the major red flags that caught my attention…

Of course you should always be wary when you hear someone telling you about thousands upon thousands of dollars you can easily make online. Now this definitely doesn’t mean it is a scam, but it sure is a red flag that should raise your suspicion.

At one point in the video presentation he talks about how Facebook and Google make all their money via crowdsourcing… Which is a complete lie.

Facebook, for example, makes their money from running advertisements which are paid for directly by the advertiser, which could be anyone… You, me, a company, etc. There is no crowdsourcing when it comes to the Facebook advertising platform. This is a complete lie.

I dug a little deeper into this whole Crowd Profits thing and found that the website is very new… Which is definitely a bit strange. I mean how can people be earning $4000 per week already if the system is pretty much brand-new?

According to ScamAdviser.com, which is a great website when you are suspicious of a website by the way, this website is only 19 days old at the time I am writing this. Now of course it may be order by the time you read this review, but the point is that it is a very new website yet they claim people are already making thousands a week with it… Which definitely seems suspect to me… 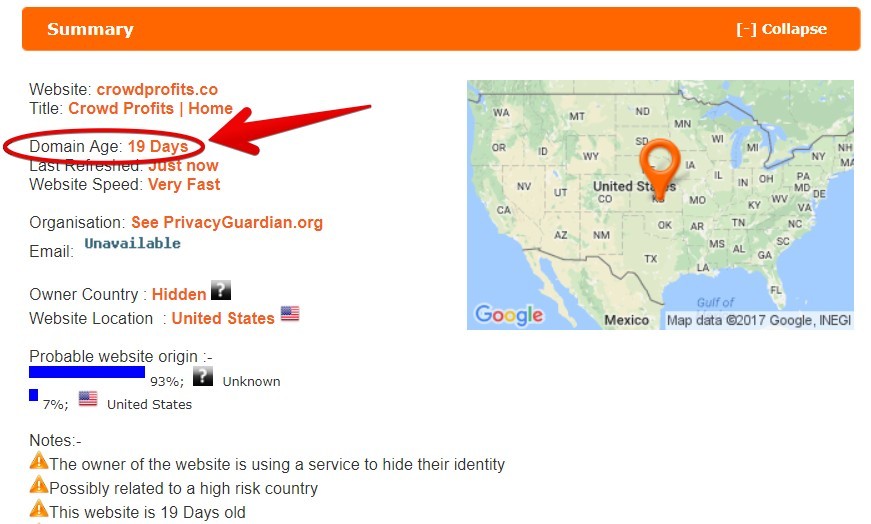 One thing you should get in the habit of doing is reading the disclaimers when you come across programs/systems that seem suspicious. This is one thing I always do because you usually can find a few hints that it might be a scam or not.

In the disclaimer I to a screenshot below, you can see that I underlined how they talk about trading Forex, CFD’s and cryptocurrencies, and they talk about this being highly speculative. HOWEVER… What the heck does this have to do with anything?

I thought we were investing in advertisements here? Why on earth would they be talking about trading cryptocurrencies and so on?…

And the last red flag that I will go over is the fact that there is no contact information for CrowdProfits. I can’t find an address, a phone number, the names of the owners or employees, anything. There is literally no information about this place and this is a very alarming sign.

Sure… You can contact them via submitting a form online, but this doesn’t do us much good. I want to find contact information about the company behind this so that I can do a little bit of research and try to verify if they are actually legitimate or not. But of course I cannot do this because there is no such information provided and there is probably a reason for this… The reason being that this is a scam.

In the video presentation the spokesperson explains how it all works. Basically what you do is make an initial investment and then you can browse that their ad marketplace to find advertisements you would like to invest in. The goal is to find new ads that look promising and invest in them, hoping that they will become popular and you will earn a bunch of money from their success… From people clicking on them…

Makes Sense, But There Is a Major Problem

It does make sense. I mean why wouldn’t it? It is a pretty cool idea for companies to crowd source advertisements, thus bringing in a lot more capital and being able to increase their advertising budgets, which would increase exposure to ads and hopefully lead to a profit.

It makes sense, but there is a major problem here… The problem being that I have reviewed plenty of other scams that make the same claims and that there is no real proof of what the spokesperson tells you is going on here.

Some of the other scams I have reviewed in the past which tell you the same thing include Clicks Dealer, Daily Banner Profits, Banner Bit and many others.

These sorts of opportunities are usually advertised as “ad flipping”, with the goal of buying ads when they are new, earning money as the become popular and people click on them, and then selling them at a higher price… Profiting all the way.

This is a relatively new type of scam that is being promoted more and more heavily. It would be awesome if you really could make money like this, but I have not seen any proof of this being the case.

How They Will Likely Scam You

Well the Crowd Profits system is free to use, but of course you have to make your initial investment, which is $200 minimum.

After investing your money there’s a good chance they will make you believe that you are making money off of your investment. What I mean by this is that the numbers in your account may increase but when it comes time to actually withdraw the money, you will likely be stuck in find out that you have been scammed.

I haven’t actually bought into this and tested the system out for myself, but I have reviewed enough similar scams to know this is how they usually operate.

As I said, I have not actually tested the system out for myself, so I guess you could say that I am not 100% sure it is a scam, but I will say that I am 99% sure.

Everything about this place tells me that is a scam. It seemed like a scam right from the start, but even after doing more digging around it seems even more like a scam. They lied to you in the video presentation, the disclaimer makes no sense, we have no idea who is behind this company, there is no contact information, the website is brand-new, etc.

There is absolutely no proof that any of this is real. For all I know, this could be created by one guy behind his computer and it could be a complete fraud.

My advice… Avoid this place at all costs. And if you already have deposited money I would try to get back as soon as possible.

If you want a recommendation from me for making money online, I would highly suggest taking a look at how I went from $0 to over $6000 per month online. You will learn what exactly I do, how it all works, and how a complete beginner can get started doing the same.

Also, please leave any questions or comments down below and I’ll get back to you as soon as I can 🙂 Let me know what you think about this Crowd Profits system. Do you agree with me when I say it is a scam?